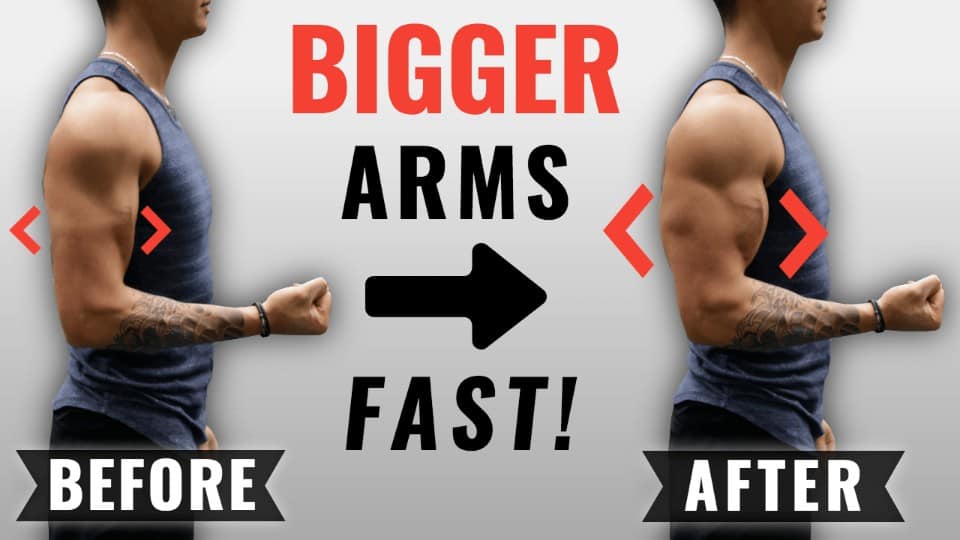 How To Get Bigger Arms FAST: 4 Science-Based Tips

If you want to learn how to get bigger arms as fast as possible… Then you need to read this article.

If you’re like me, then chances are one of the reasons you first started lifting weights was to build big, powerful looking arms like in the movies. 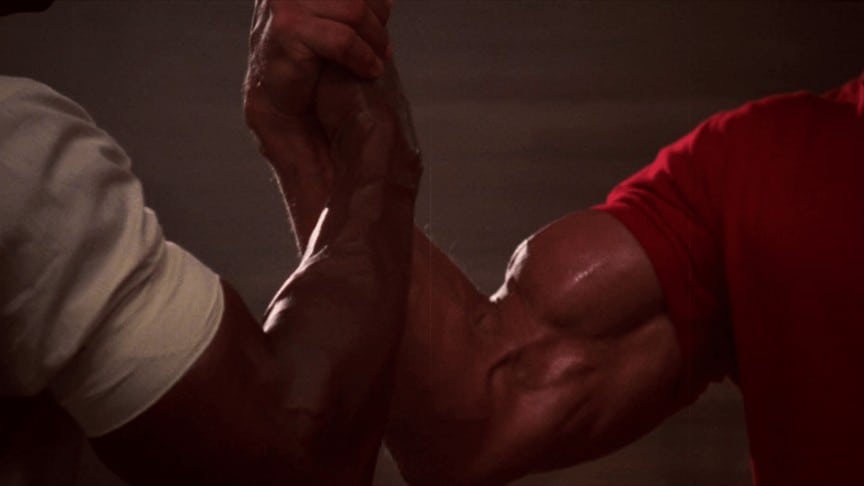 And I wouldn’t blame you, as the arms are one of the first body parts you notice on someone and can dramatically improve your physique.

But, you’ve also probably come to the realization that building bigger arms is no easy feat and is a much slower process than most people perceive it to be.

However, if you’re serious about maximizing your arm growth, then luckily there are a few exercise strategies that research indicates are able to considerably speed up the process.

And in this article, that’s exactly what I’ll cover so that you can build bigger, more powerful looking arms as fast as possible.

The first step you need to take is to ensure that you’re performing enough volume. This is vital since we know that there’s a positive relationship between weekly volume and muscle growth.

So if you haven’t been seeing the results you’ve been hoping for in terms of your arm growth, then increasing the amount of weekly sets you dedicate to your arm training would likely be the solution.

Illustrating this, a 2019 paper on trained men compared the effect of performing 6, 18, or 30 weekly sets for the biceps and triceps. After 8 weeks, they found that there was a significant dose-response effect observed for biceps growth and total weekly sets, with a similar trend seen with the triceps as well: 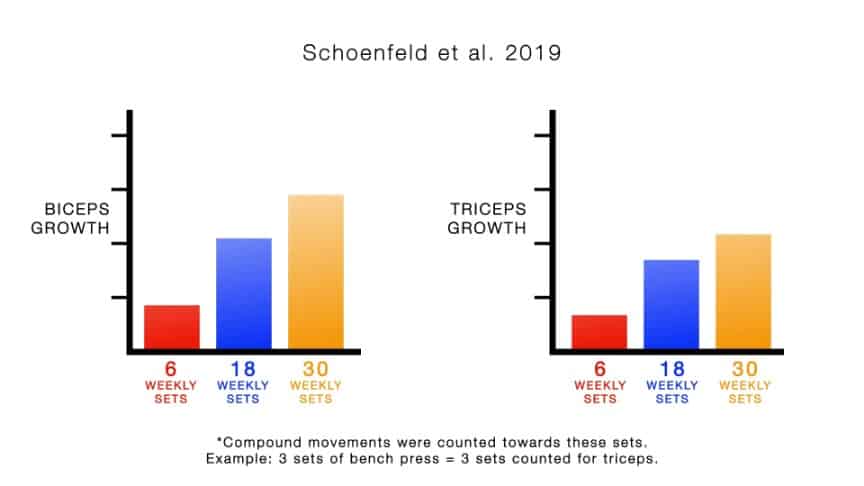 Meaning that more volume did indeed lead to faster growth of the arms, which multiple other studies have found as well.

…but it does mean that gradually increasing your weekly volume for the arms can speed up growth.

For instance, to build big arms you can:

Simply perform and repeat the above process and you’ll quickly notice a different in your arm growth.

Tip #2: Move Arm Exercises to Earlier in Your Workout

Now typically you’ll want to perform your heavy compound exercises first in your workout. BUT –  if your main goal is to build big arms then you can and should move your arm exercises to the beginning of your workout.

This is because multiple studies have found a trend where lifters get better gains for exercises that are done early in a session.

For instance, a 2010 paper from the Journal of Strength and Conditioning research compared the effects of two workout scenarios:

After 12 weeks, they found significantly greater triceps growth when the arm isolation exercises were done first, and a similar trend was found for the biceps as well.

This finding was also replicated in another study, which led researchers to conclude that:

If an exercise is important for individual training goals, it should be performed at the beginning of the training session, whether or not it is a large or a small muscle group exercise. 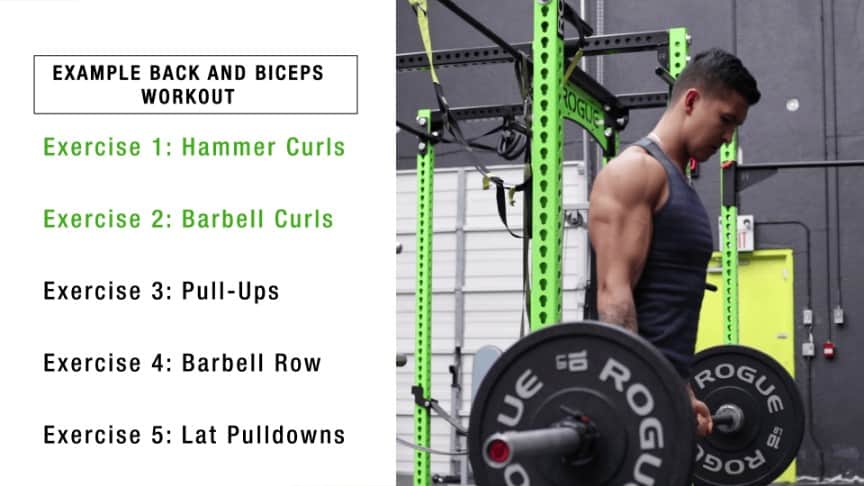 …moving your arms exercises to the beginning of the workout can help prioritize and speed up the growth of your arms.

In addition to moving the order of your arm isolation exercises, you’ll want to also focus on progressing them week to week just as you would your compound exercises. 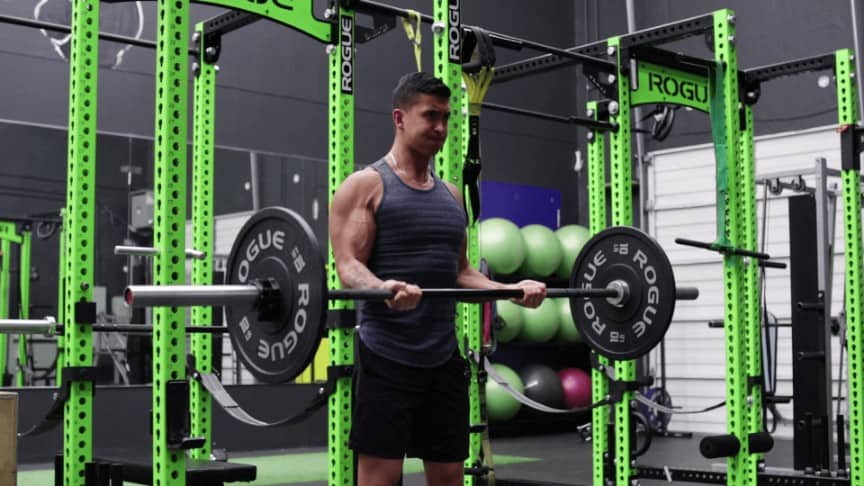 This is especially important for building big arms.

Well, as indicated by the findings of this 2017 paper that analyzed the relationship between muscle growth and strength:

…which is likely because they have less of a skill component to them than compound movements do.

Thus, week to week you should be focusing on two major things…

…as the above progression you make with your arm workouts overtime will likely be the result of increased arm growth.

Now in order to best implement the previous tip and see the best results, it’s vital that you avoid frequently changing up your designated arm isolation exercises. 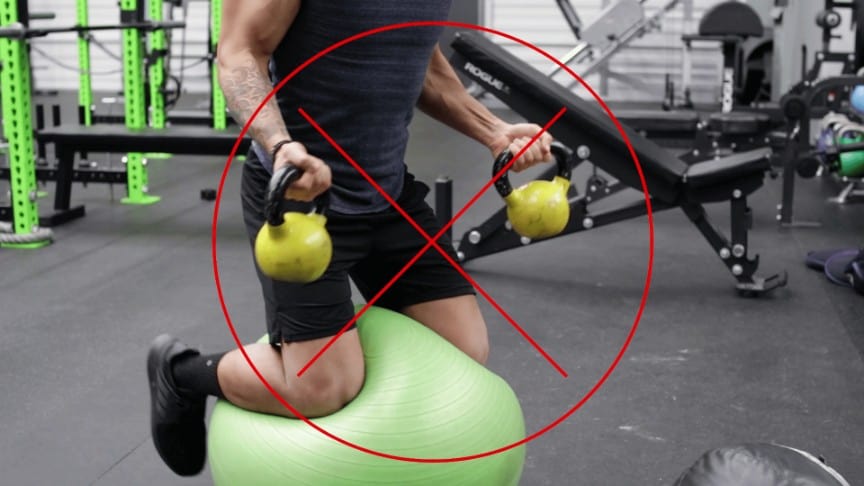 The idea that you have to “confuse” or “shock” your muscles into growth by subjecting them to new stimuli and new exercises every single week just isn’t a good approach and has very little validity to it.

…but increasing it by forcing them to do a little more week after week.

So instead, you want to first pick the right set of arm isolation exercises which I show how to do in some of my previous arm articles. And then, stick to those same arm exercises week after week with a focus on getting stronger with them as previously discussed.

This way, you’ll be able to more consistently track your progress with them. And overtime, you’ll be miles ahead of the average gym-goer trying to continually “confuse” his muscles without actually making any solid progress.

But all in all, properly implement the tips I previously mentioned and I guarantee you’ll start to notice major changes in your arm growth in no time.

How To Get Bigger Arms Summary

So to sum the article up, here are the main points to keep in mind: 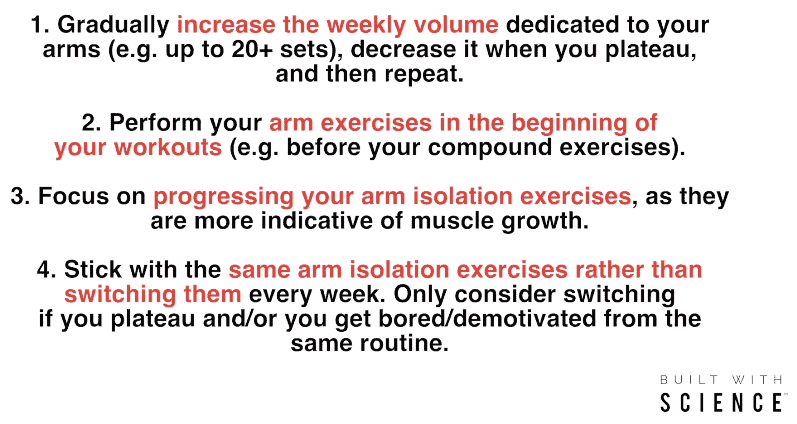 As I say quite often, if you want to see the best results then it’s vital that you choose the right exercises and variations. But, even more importantly is that you implement and progress them correctly within your routine.

And by using an approach that’s backed by science, you can feel completely confident that you’re maximizing your efforts in the gym…

…enabling you to build muscle (and lose fat) as fast as humanly possible.

Using a proven approach is what’s going to enable you to progress at the fastest rate and is why thousands of members are experiencing incredible results with the #BuiltWithScience programs.

Within my programs you’ll have access to weekly workouts, a powerful nutrition software, exercise video tutorials, meal plans, a private Facebook group, and so much more.

To get started with your transformation today, simply take my starting point quiz below to determine which program is best for you:

How To Get Bigger Arms FAST: 4 Science-Based Tips

10 thoughts on “How To Get Bigger Arms FAST: 4 Science-Based Tips”