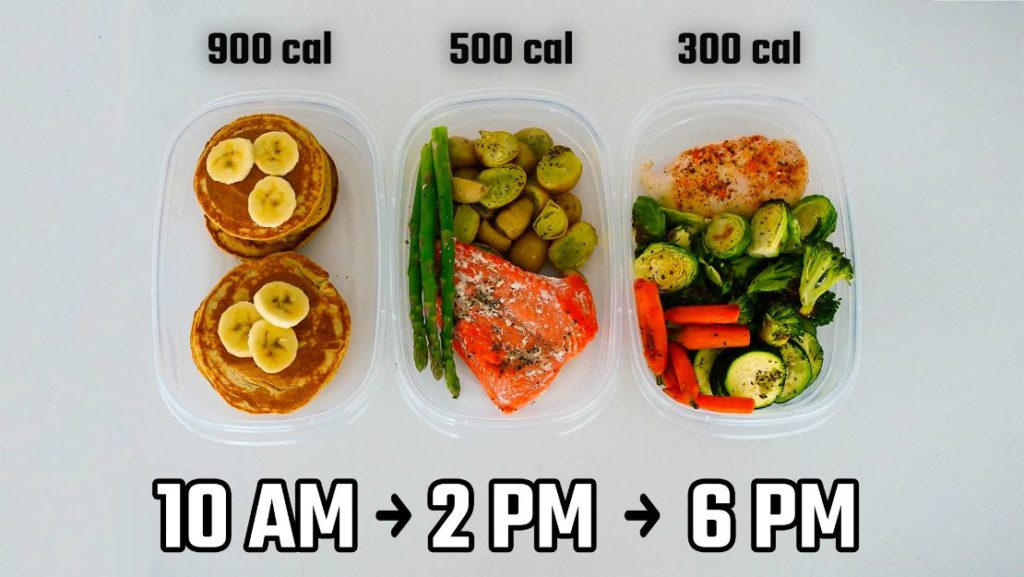 The Best Diet Plan For Weight Loss (3 Science-Based Swaps You Need To Make!)

Want to lose fat faster? In this article, I’ll go through 3 science-based diet swaps you need to make for quicker weight loss results.

Read any of my past articles on nutrition (e.g. this)? Or, ever attempted a diet plan for weight loss? Then you’re probably aware of the notion that at the end of the day, weight loss is all about calories in versus calories out. As long as you’re eating at a calorie deficit, then you’re going to successfully lose weight and strip off fat regardless of what and when you eat. Well, ideally getting enough protein in as well, of course.

Scientifically speaking, this is true. And is also the basic law of thermodynamics. But what this simplistic model fails to account for is how the various foods you put into your body actually then go about affecting these two variables.

Yes, research has shown that at the end of the day, calories are what matters most. But if you want to truly lose fat as efficiently and as quickly as possible, then you need to go beyond just calories. And, instead:

As that’s what makes all the difference. And in this article, I’ll go through 3 swaps that you’ll want to make in your diet. These swaps account for those variables and can enable you to lose fat faster. I’ll also provide you with a sample meal plan that puts this all together for you.

The first swap you’ll want to do with your diet plan for weight loss is to stick mostly with minimally-processed foods. So, for example, foods like oats and multigrain bread. Those, as opposed to their refined counterparts, such as cereal and white bread. These have been stripped of most of their important nutrients and fiber.

There are two ways these less-processed foods are beneficial when dieting:

The second point has to do with something called the thermic effect of food (TEF). This refers to the number of calories that our body burns to metabolize and actually use the foods that we ingest. And as it turns out, our body just burns more calories when digesting unprocessed foods.

You Burn More Calories When Metabolizing And Using Unprocessed Foods

For instance, one study compared the caloric burn required to digest and metabolize two minimally processed sandwiches consisting of:

Note that both meals consisted of virtually the same amount of total calories and protein. And despite this, the more processed sandwich had a 50% lower thermic effect! As a result, the body burned significantly fewer calories digesting it than it did with the whole grain sandwich.

Similarly, a 6-week randomized controlled trial had subjects stick to a diet consisting of either:

What they found is that the whole grain foods group burned on average roughly 100 more calories per day than the processed food group did. And note that this is just from digesting and metabolizing their food! 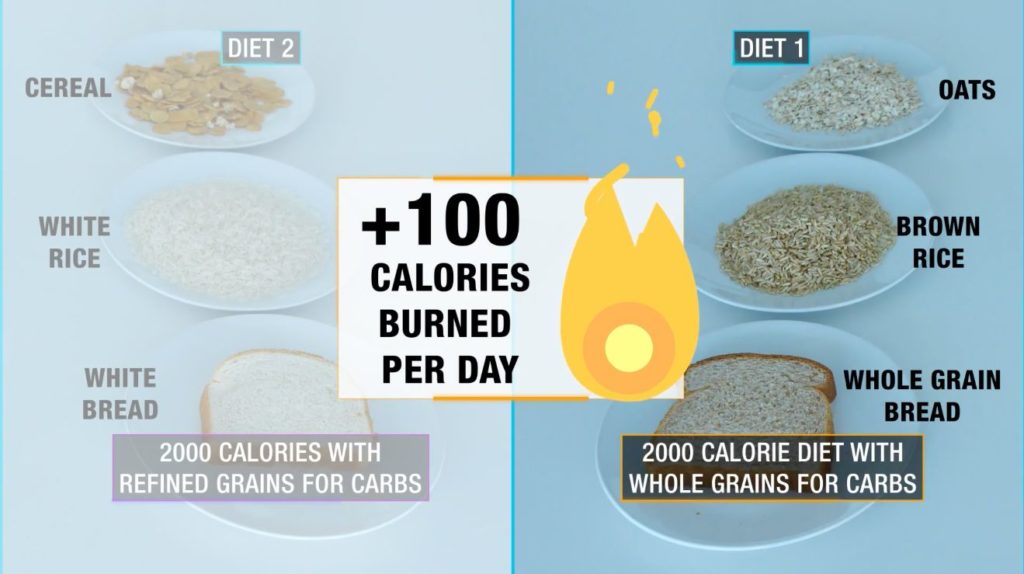 To put this into perspective, the average person burns roughly 100 calories to jog a mile. So, you’d essentially be doing the equivalent of jogging an extra mile a day JUST by choosing to incorporate whole grain, less processed foods as opposed to more processed foods for most of your meals. And, if you crunch the numbers, over 3 months this simple change would theoretically enable you to burn 2.5 lbs MORE fat just by making that switch.

Yes, calories are what matter most. And you definitely will still burn fat despite eating processed foods as long as you’re still in a calorie deficit. But you can further influence the “calories out” side of the equation by simply swapping these foods for whole-grain, less processed foods instead. Let them do the work for you! And this will then potentially speed up the fat loss process.

Next, let’s dive into how you then go about distributing your meals throughout the day. Yes, your total daily calorie intake is what matters most for fat loss. But it turns out that the manner in which you distribute these calories throughout the day seems to be more important than we’ve previously been led to believe.

Illustrating this is a recent 2020 paper and another similarly designed 2015 paper that compared the effects of:

What the researchers found is that subjects using the front-heavy approach experienced:

This meant that they were able to adhere to the diet more easily. AND likely burned more calories throughout the day from fidgeting, walking, and just moving more in general. This is because of their increased energy levels.

And in fact, this protocol was also repeated in a longitudinal weight loss study which found that subjects using a front-heavy approach:

When compared to a group that used a back-heavy approach by simply swapping the breakfast and dinner calories. 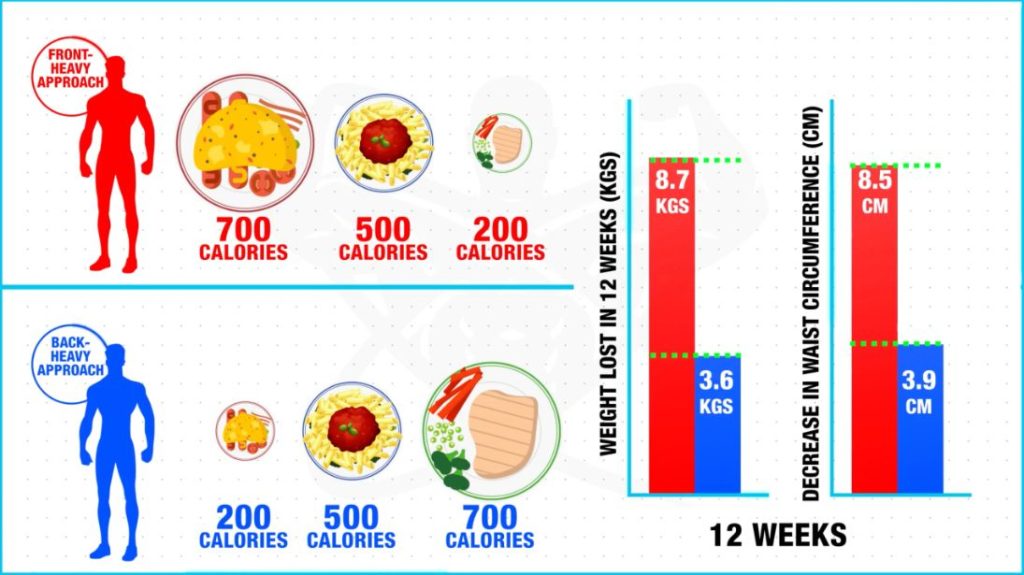 All of this indicates that there does seem to be some indirect fat loss benefits to allocating more calories to your meals early on in the day. And this is something that I’ve personally noticed as well. I used to be someone who would save a lot of my calories for my evening meal. That’s because I knew that’s when my cravings would really hit. But then I experimented with shifting more and more calories early on in the day and in breakfast. And I found that not only did my energy levels throughout the day and gym performance improve, but I also wasn’t craving things as much at night! Why? Well, because I just wasn’t as hungry!

Now, obviously, this does vary for the individual. And may depend on when your workout takes place. Even then, I would highly suggest to at least experiment with just shifting more of your calories to your first meal of the day. Even if you’re intermittent fasting, for example. Because doing so does seem to have some unique benefits in terms of enabling you to:

Now the last swap is something I’ve covered in the past. You should not only choose mostly unprocessed foods to include your diet. But you should also choose the ones that are highly satiating. These are the ones proven to do the best job at suppressing your appetite. As this will enable you to better adhere to your diet and minimize any excess snacking you may be doing that’s sabotaging your calorie deficit.

Let’s take a look ar the findings from the satiety index, which examined the effects of 38 different common foods on hunger levels. Now, we can clearly see that on a calorie for calorie comparison, some options are much better than others when it comes to controlling your appetite. 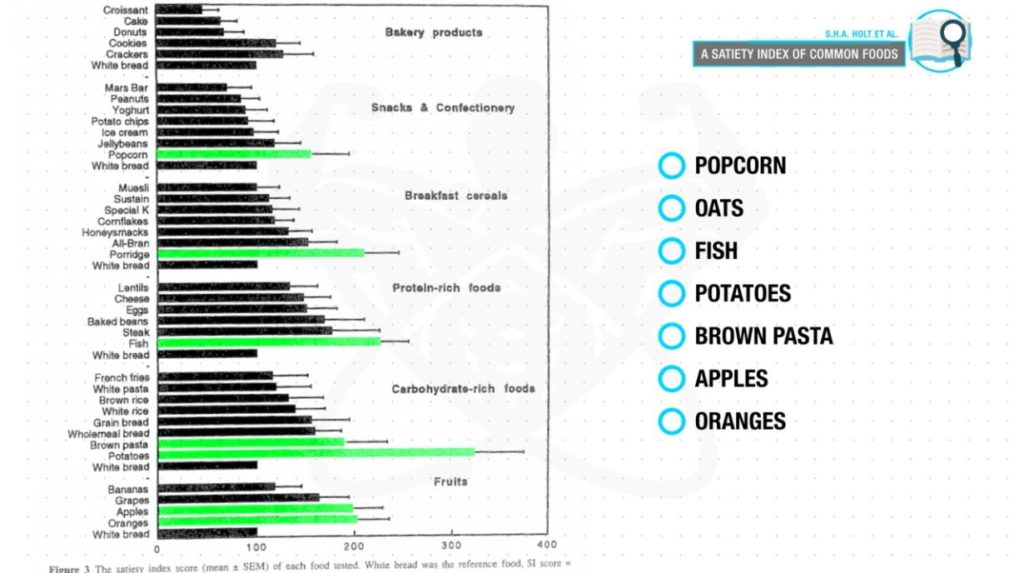 For example, even with calories equated for, simply swapping:

So, what I’d suggest is look over the index. And experiment with swapping some of these more satiating foods into your diet. Then, see how your body and appetite respond.

Now, to put everything together for you, let’s go through a sample meal plan. You’ll find that this plan not only incorporates these various tips but also tastes great. I’ll use roughly 2,100 calories for this meal plan. But keep in mind that you’ll want to adjust the portion sizes based on what’s needed for you to be at a calorie deficit.

So, to start we’ll be allocating most of the calories towards breakfast. We’ll do so with protein pancakes made completely of highly satiating, minimally processed foods. For these, first, blend the oats to make oat flour. And then add the rest of the ingredients to blend. Then, simply cook them over a pan and top them with peanut butter, sugar-free syrup, sauteed apples or whatever you’d prefer. 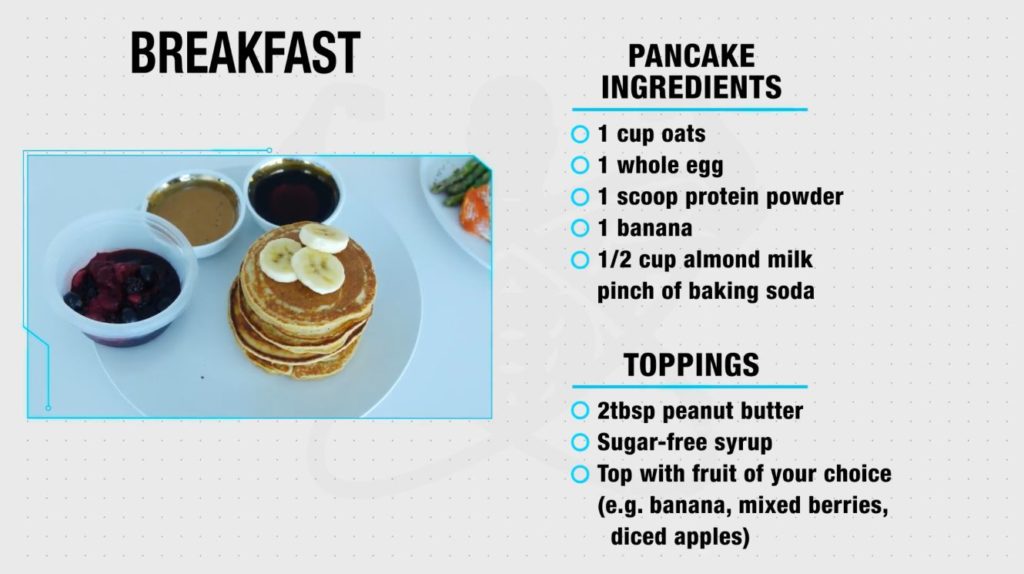 Then for lunch, we’ll be tapering down the calories slightly. But still sticking with satiating, unprocessed foods, of course. We’ll do so with baked salmon, boiled potatoes, and a side of sauteed asparagus. 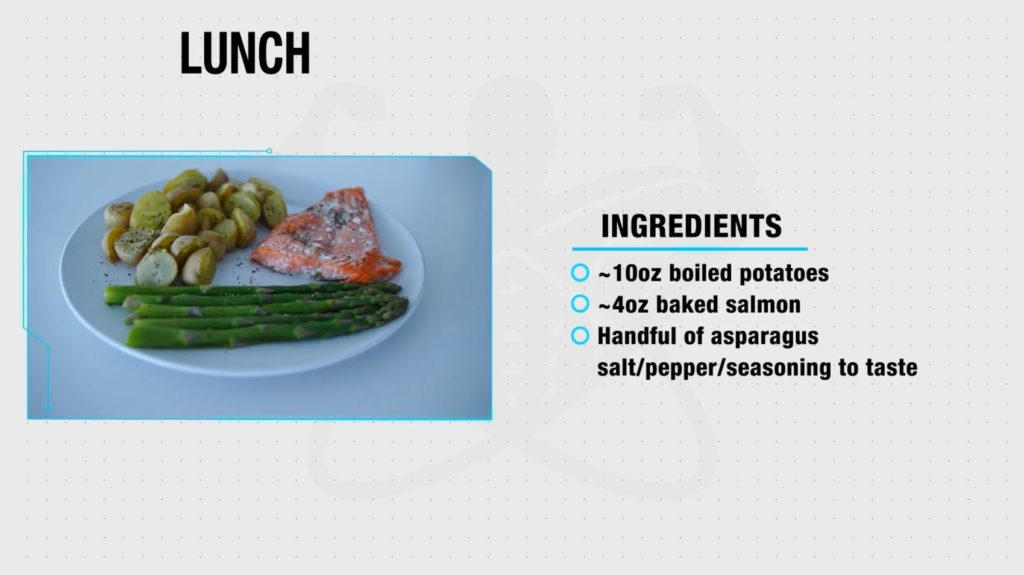 Then, to keep you going until dinner, you can have an orange and can even plan in a protein shake as well depending on when your workout is.

Then for dinner, we’ll continue tapering down the calories slightly with baked chicken breast and a side of roasted veggies tossed in olive oil. 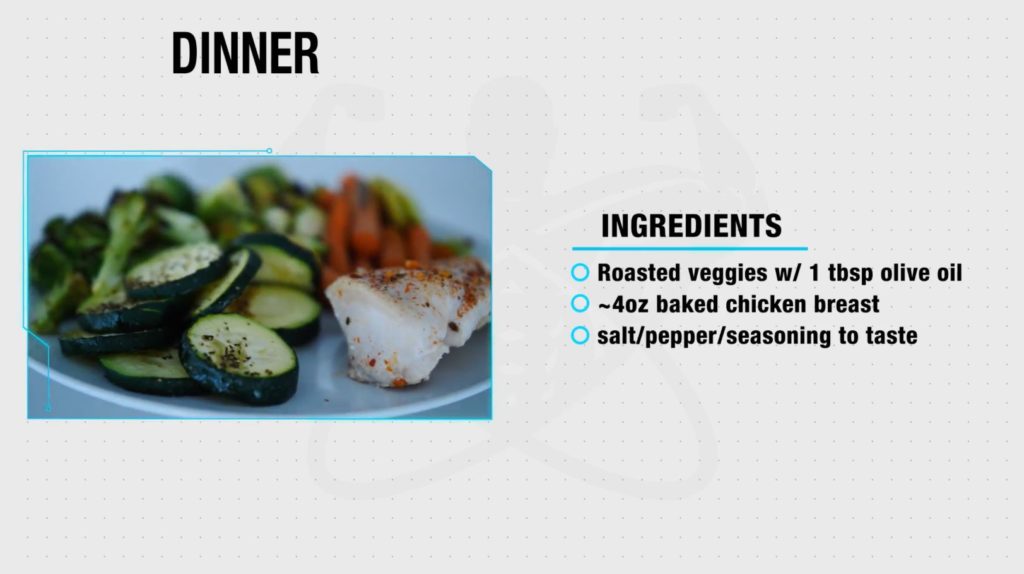 And after dinner, to help satisfy whatever sweet cravings may have popped up, we’ll make a simple high protein greek yoghurt parfait consisting of 0% fat plain greek yoghurt mixed in with cinnamon and stevia for sweetness, and then topped with frozen mixed berries and a tablespoon of chia seeds. Super easy to make yet extremely satisfying.

So hopefully that meal plan gives you a little more insight into how you can start planning your diet plan for weight loss based on what I want through while still keeping everything tasty and satisfying. And just keep in mind that although some of the swaps I mention here CAN definitely help speed up the fat loss process, just know at the end of the day adhering to a calorie deficit is what’s most important. So experiment with your diet and stick to what you find works best for you and your lifestyle.

And for an all in one step-by-step program that not only optimizes your weekly workouts for you but also shows you how to structure and set up your diet with the right foods and in the right amounts so that you can burn fat as efficiently as possible with science, then:

Alright, that’s all I have for now. Hopefully, you now have a clear idea on how to set up the best diet plan to lose your body (and belly) fat! Don’t forget to give me a follow and connect with me on Instagram, Facebook, and Youtube as well, in order to stay up to date with my content.

The Best Diet Plan For Weight Loss (3 Science-Based Swaps You Need To Make!)