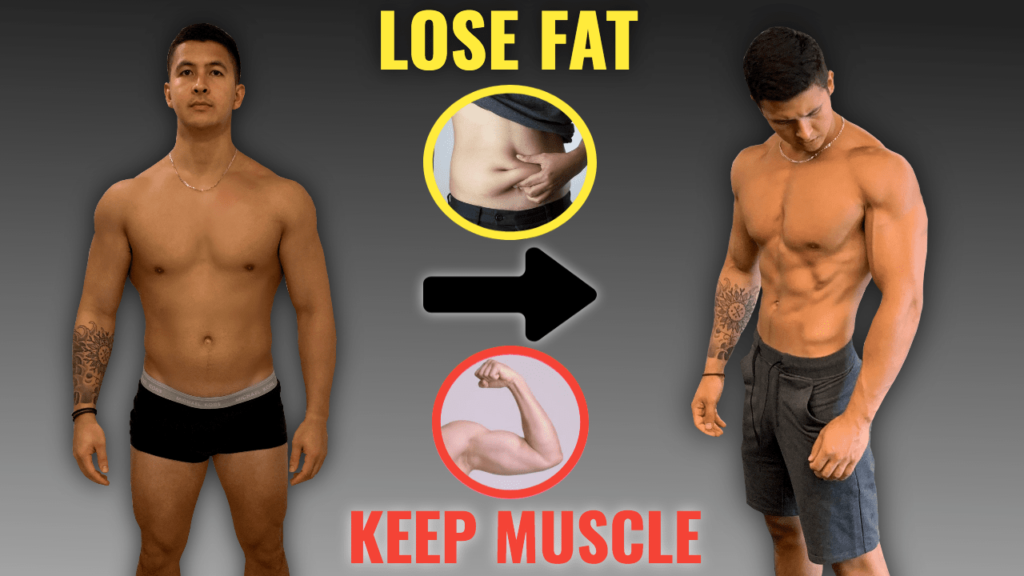 Have you had trouble keeping (and even building) muscle while on a diet? In this article, find out the 3 dieting mistakes you need to avoid so you finally know how to lose fat and gain muscle effectively.

Today, we’re going to cover dieting. More specifically, we’ll cover the wrong ways in which people approach and go about implementing a diet. These mistakes not only limit the amount of fat you lose but also compromise your ability to retain or even build muscle throughout the process.

Which is detrimental. That’s because, by the end of your dieting period, you don’t want to just end up skinnier or “skinny fat”, for example. Instead, you want to instead strip off a significant amount of fat while maintaining or building as much muscle as possible. Only then can you achieve a lean, well-defined physique.

And in this article, that’s exactly what I’ll show you how to do so you learn how to lose fat and gain muscle the proper way.

And as I’ve said in the past, your nutrition will hands down be the most important factor when it comes to transforming your body. I used to be completely lost as to how to approach my nutrition and I know a lot of you out there are as well. This is exactly why within my Built With Science programs, I not only cover training but also stress the importance of nutrition. In fact, I even developed a custom-built nutrition software designed to optimize your diet based on your own stats and goal. For more information:

One of the biggest diet mistakes people make when it comes to how to lose body fat and gain muscle is being too aggressive with weight loss.

Because when it comes to how to lose fat and gain muscle mass throughout the process, you need to supply your body with enough energy and nutrients. And this can only be achieved by slowing down the rate at which you lose weight during your diet. I’ve not only noticed this myself when dieting but I’ve seen this multiple times in the literature as well. 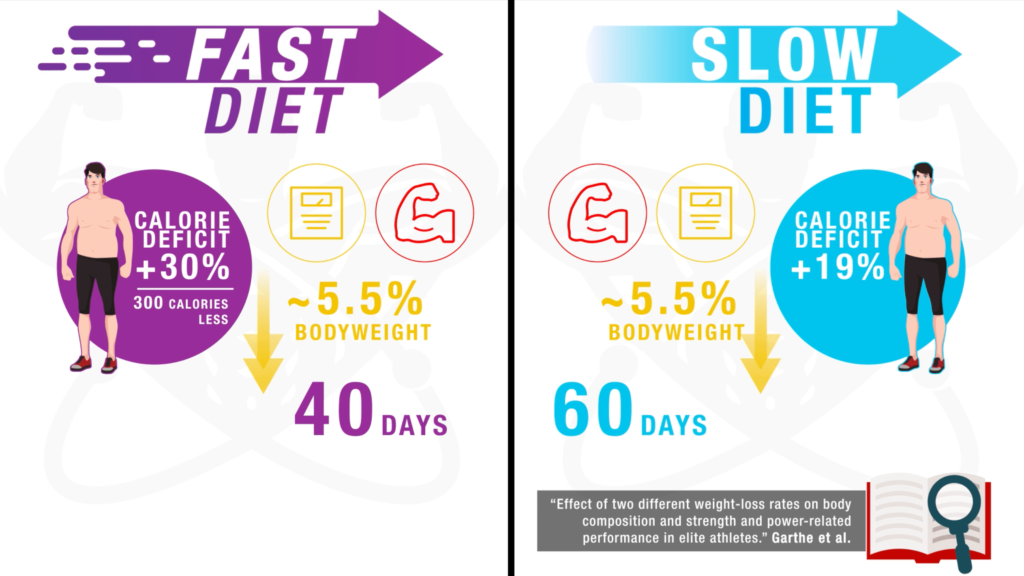 For example, a well known 2011 paper illustrates this perfectly. The paper compares the effects of a “fast diet” versus a “slow diet” on body composition and strength. The researchers recruited trained subjects and randomly assigned them to two groups: 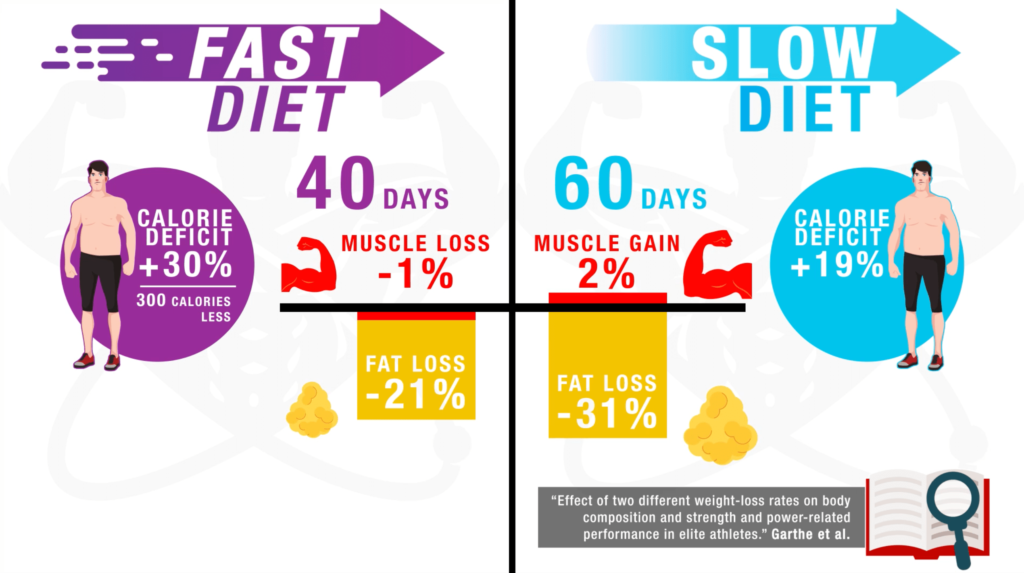 On a daily basis, the fast group was eating roughly 300 calories less than the slow group. The researchers then analyzed the effect it had on the subjects’ muscle and fat levels after each group lost the same amount of total weight (5.5% of their body weight). While this amount of weight loss took the slow group 60 days, the fast group took a mere 40 days.

But despite reaching the weight loss mark faster, the fast group actually lost significantly less fat than the slow group. They also lost a little bit of muscle mass as well (-0.2%). On the other hand, the slow group:

And other papers (here, and here) have found similar results. With the general suggestion being: “while more aggressive diets may yield faster weight loss, the percentage of weight loss coming from muscle instead of fat tends to increase as well.”

How Slow Should You Go To Lose Fat And Gain Muscle? 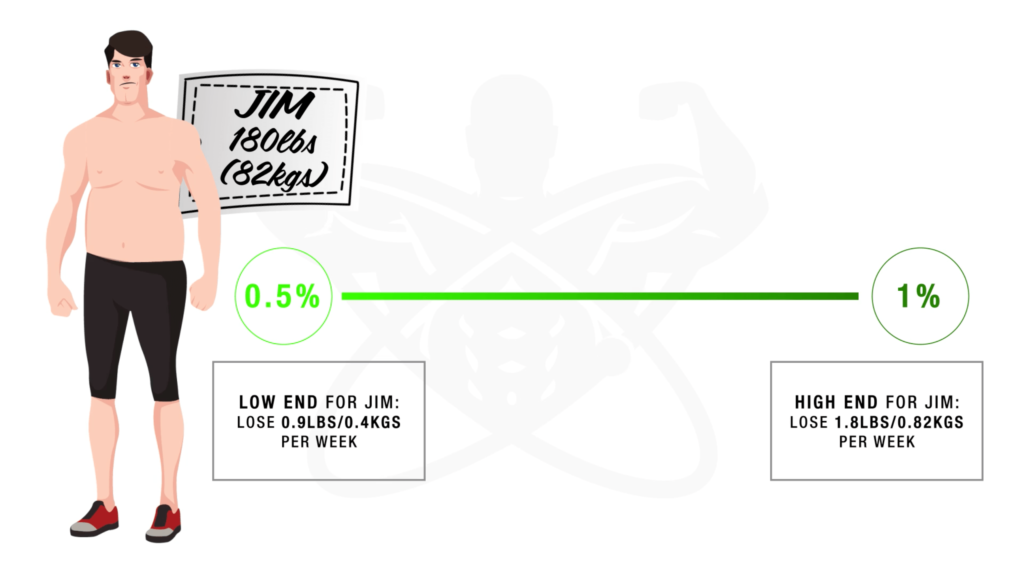 So what I’d suggest is for you to take a slower approach when it comes to a diet to lose body fat and build muscle. Doing so allows you to preserve or even build muscle as you burn off your fat. A good general recommendation is to aim to lose around 0.5-1% of your body weight per week. 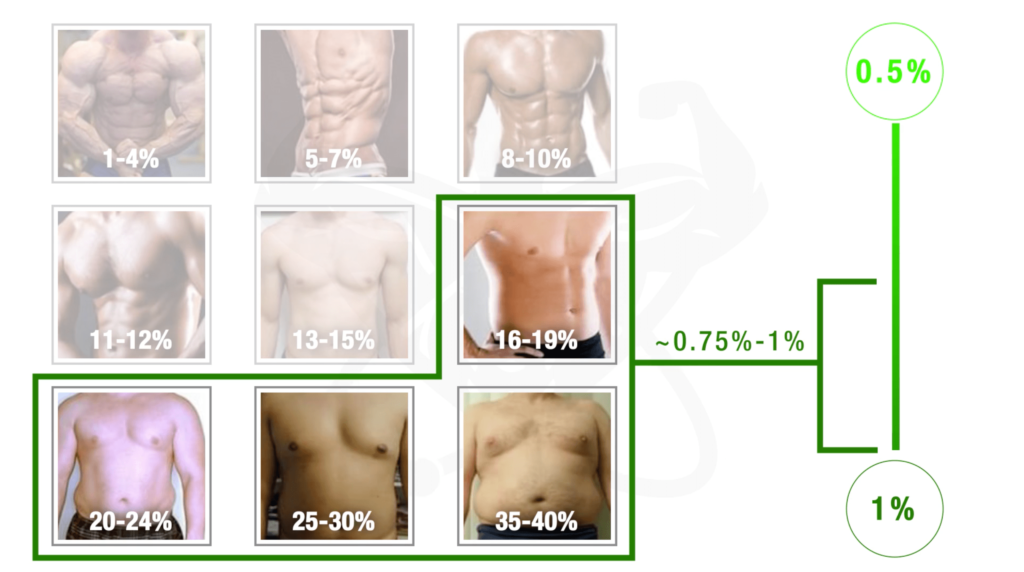 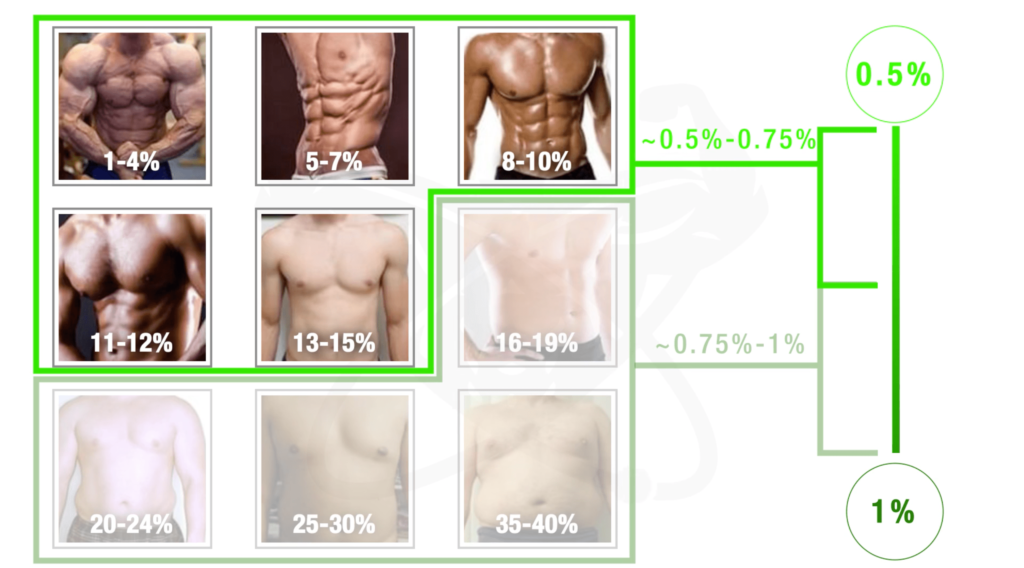 But this does depend on your current level of body fat. So for example:

Tweaking your calorie deficit is key to how to gain muscle mass fast and lose fat – at the same time.

Mistake 2: Doing Too Much Too Soon

The next mistake when it comes to a diet to build muscle and lose fat is simply doing too much too soon at the start of your diet. So, for example, what a lot of people do is as soon as they start dieting, they’ll drastically reduce their food intake or even cut out their carbs completely. And they’ll also ramp up their cardio simultaneously, thinking that this is all going to speed up the process.

Doing Too Much Too Soon Derails Your Progress

This may be true in the short term. But it’s actually going to prevent you from losing a significant amount of fat and getting really lean in the long run. That’s because of two reasons: 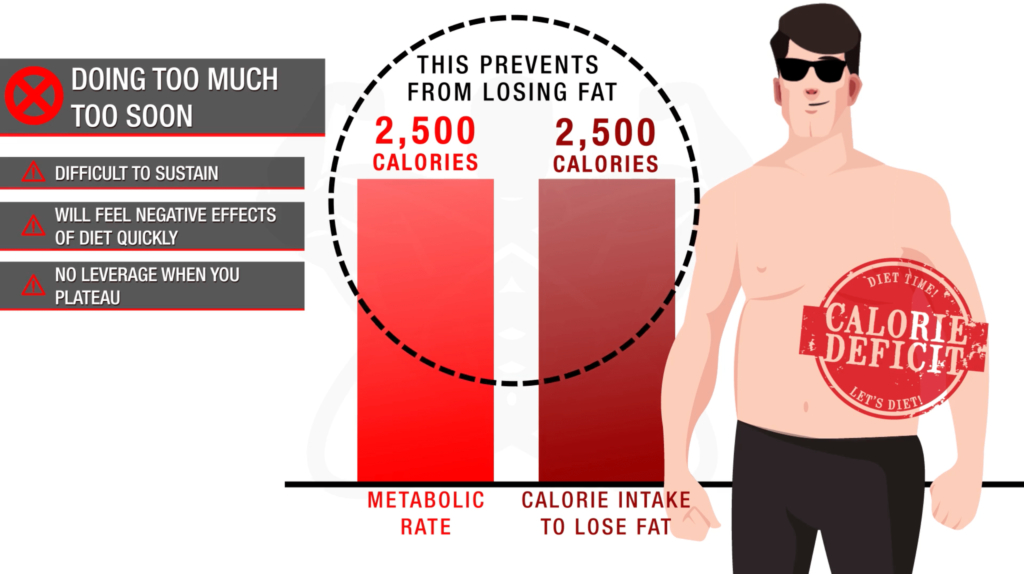 Because when you start dieting and put your body in a calorie deficit, over time, your body compensates. It does so by decreasing its metabolism to burn fewer calories. Your body decreases the various movements you make throughout the day or your NEAT. (Not sure what NEAT means? Read my previous article on TDEE 101 here.)

Which eventually leaves you stuck in a fat loss plateau since your metabolism has decreased to the point where you’re no longer in a calorie deficit to lose fat.

If you wish to break through this fat loss plateau, typically it would simply be a matter of either:

But you’re already starving yourself. And doing a ton of cardio. So, how on earth are you going to consistently continue pushing to break through this fat loss plateau? Not to mention, the several other plateaus you’re bound to encounter in the future?

It’s simple – you’re not. And this is what leaves a lot of people both stuck spinning their wheels in their fat loss journey and losing a lot of muscle from just doing too much. So, when it comes to how to lose more fat than muscle in a diet, the pace is key.

How To Lose Fat And Gain Muscle By Starting Slow 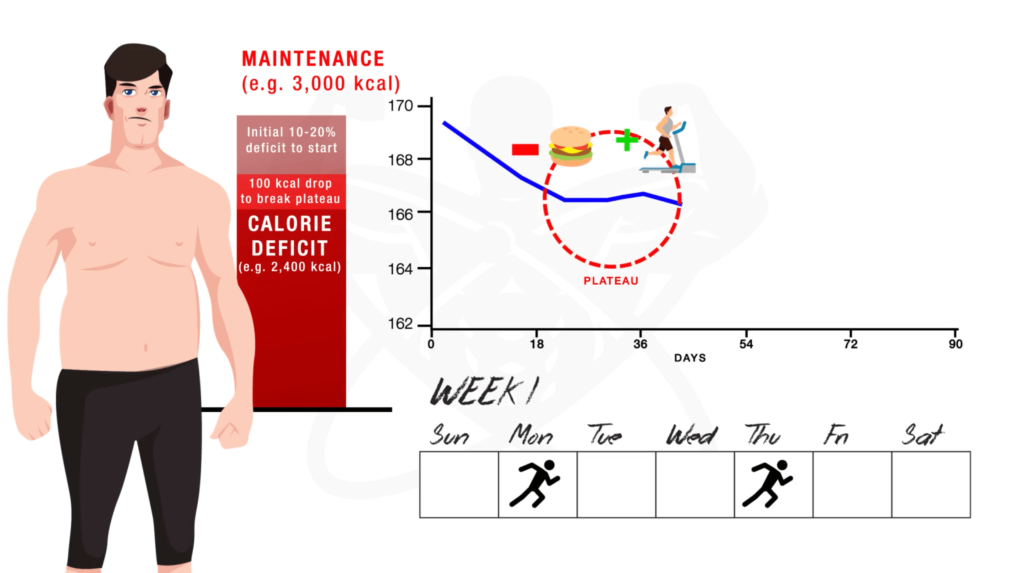 You want to first start at a small to moderate calorie deficit of roughly 10-20% or 500 calories below your maintenance, for example. And you also want to start out with minimal cardio. So, for example, 1-2 low-intensity sessions per week.

As the weeks go by, your weight and fat loss will inevitably begin to stagnate. This is when you can simply drop your calories further and/or increase your cardio slightly, as needed. Doing so allows you to break through these plateaus every time you reach them.

But had I not started out easy, I wouldn’t have had that leverage I needed to break through the various plateaus I encountered. And that, ultimately, was what enabled me to drastically drop my body fat.

If you need help sticking to your calorie deficit, our 3-on-1 coaching program can help. You are going to have a dietitian who’ll customize your meals (varied and delicious!) to suit your fat loss goals. Plus, your coach and I will also be available to guide you every step of the way. If that sounds good to you, then:

Now the last mistake when it comes to how to lose fat and gain muscle is not taking breaks. And more specifically, I mean breaks with your calorie deficit. Because as I mentioned earlier, the longer you diet, the more your body begins to physiologically adapt. This adaptation not only slows down your fat loss but also makes you more prone to losing muscle.

To reverse this effect though, you can use a strategy where instead of dieting continuously for x amount of weeks, you diet intermittently. With the use of something called diet breaks.

The Effectiveness of Diet Breaks

Now, diet breaks are a somewhat novel yet very effective dieting strategy.  To implement this strategy, you simply increase your calories back up to maintenance for a week or two during your diet. What this does is it reverses a lot of the physiological adaptations that your body has made in response to your diet. And it’ll then make your weeks of dieting after this break a lot more effective for both fat loss and muscle retention. 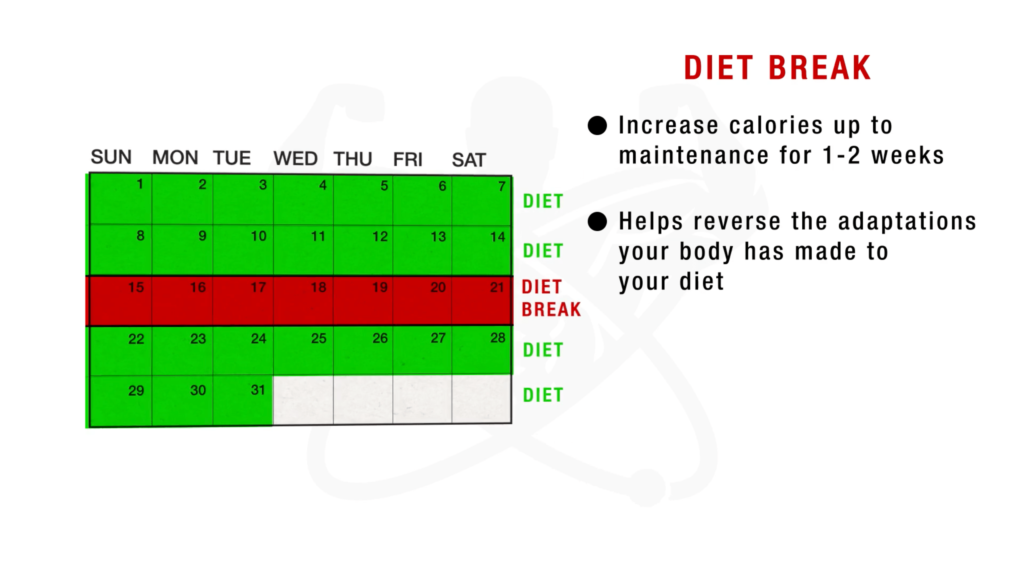 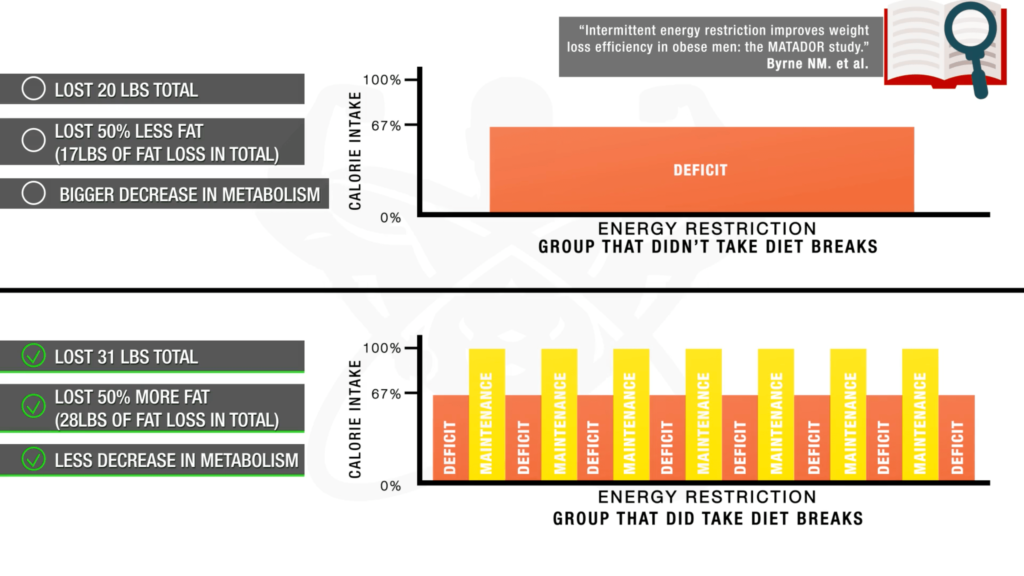 After both dieting periods were over, despite being in a calorie deficit for the same amount of time, the diet break group ended up losing 50% more fat without losing more muscle. They also experienced significantly less of a drop in their metabolism throughout their diet. Which helped them better maintain their new weight post-diet when compared to the continuous group.

How To Best Implement Diet Breaks

The only major downside with diet breaks, though, is that it will extend the length of your diet as a result. But I wouldn’t follow the exact protocol that was used in this study.

Instead, what I’d recommend for how to lose fat and gain muscle is simply implementing a one-week diet break after every 4-8 weeks or so of dieting. This way, you’ll avoid increasing the length of your diet too much while still getting the many benefits that diet breaks have to offer.

So, as you may have noticed, when it comes to how to lose fat and gain muscle (properly leaning out), you need to avoid rushing the process. Rather, you should slow it down by using a more controlled and systematic approach.

And if you’re looking for a step-by-step program that shows you exactly how to implement this with both your workouts and your nutrition, such that you can lean down while improving your muscle definition and strength:

I hope you enjoyed this article and have learned the secrets to how to lose fat and keep muscle! Don’t forget to give me a follow and connect with me on Instagram, Facebook, and Youtube as well, in order to stay up to date with my content. 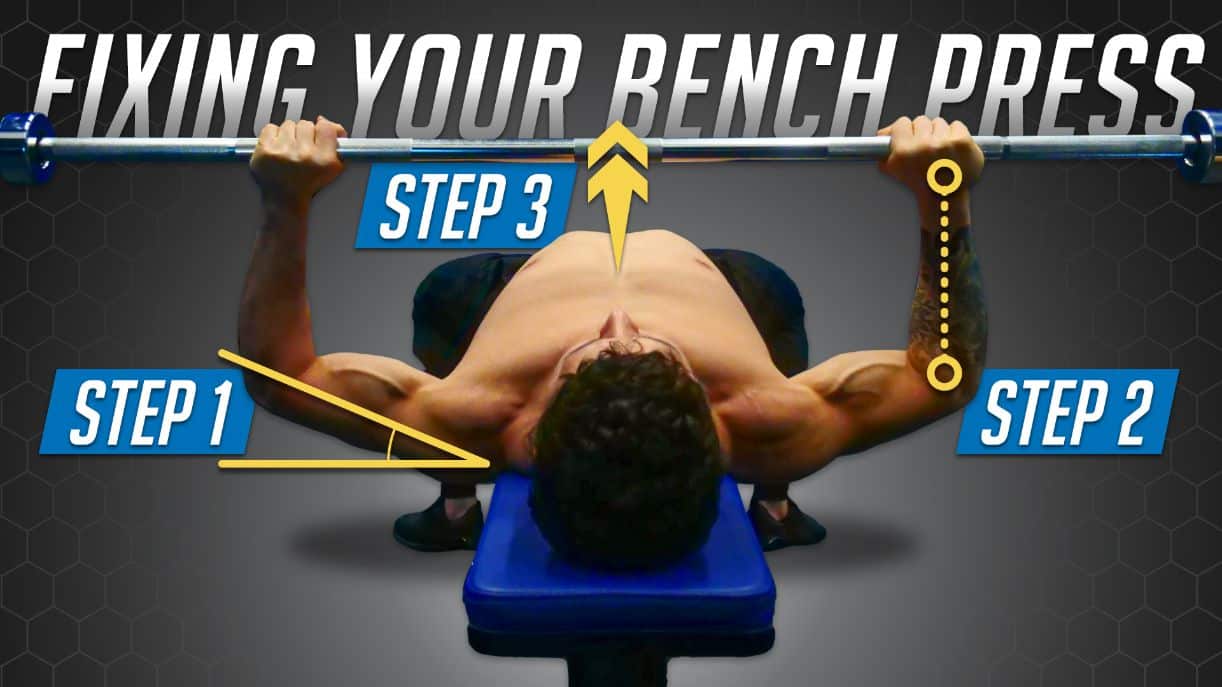 How To Bench Press Based On Your Anatomy (Correct Your Form!) 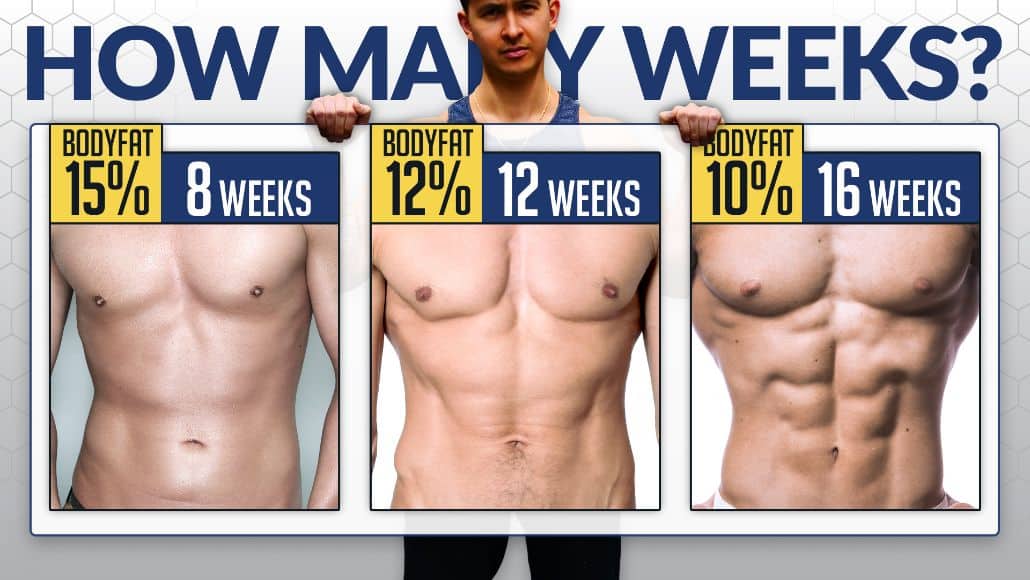