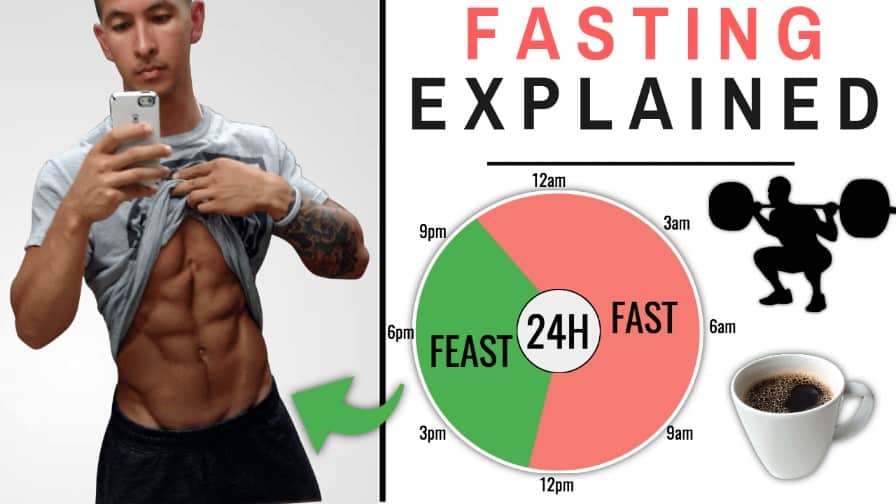 Intermittent Fasting: How to Best Use it for Fat Loss (Step-By-Step Guide)

If you want to learn exactly how to use intermittent fasting to boost fat loss… Then you need to read this article.

The idea of skipping breakfast, consuming zero calories for several hours on end and then feasting within a designated time period goes against much of what’s typically believed to be optimal for fat loss and muscle retention.

However, the truth is, when done properly, intermittent fasting can be a great tool to help you lose fat faster and for good – all without sacrificing tons of muscle mass in the process.

And in this article I’ll show you exactly how to do so by taking a look at the following points:

…before we get into that though, let’s start by first clarifying a common misconception about intermittent fasting.

Despite what you the industry may have led you to believe, the truth is that intermittent fasting is by no means anything magical when it comes to fat loss.

In fact, the largest systematic review covering 40 studies on the topic found that:

When calories are equated, although intermittent fasting may provide various physiological and psychological health benefits, it does not provide any direct benefit for increased fat loss or muscle gain when compared to traditional dieting.

…simply meaning that at the end of the day the calorie deficit is what ultimately produces fat loss when fasting, rather than the act of fasting itself.

However, fasting does come with various benefits that does actually make losing fat easier for a lot of individuals. It’s why I personally implement it for fat loss and recommend that you at least try it.

So, what are these benefits?

The Benefits of Intermittent Fasting

The main benefit of intermittent fasting is that it often makes sticking to your calorie deficit easier to adhere to.

…but by ingesting all of your calories within a shorter time period, you’re able to incorporate larger, more satisfying meals that help you stay full despite being in a calorie deficit. Therefore likely leading to better adherence and more fat loss for you in the long run.

And THIS is exactly why intermittent fasting can be such a powerful tool for weight loss.

Not because of any fancy fat loss effect, but merely because it makes makes dieting easier.

But with that being said, there are various factors you need to get right in order to see the best results with fasting.

When it comes to fasting, there’s several different protocols out there.

For example, to name a few:

However, if your main goal is to drop body fat while minimizing muscle loss, I’d recommend sticking to the 16/8 protocol popularized by Martin Berkhan.

This simply involves fasting for 16 hours and then eating within an 8 hour feeding window: 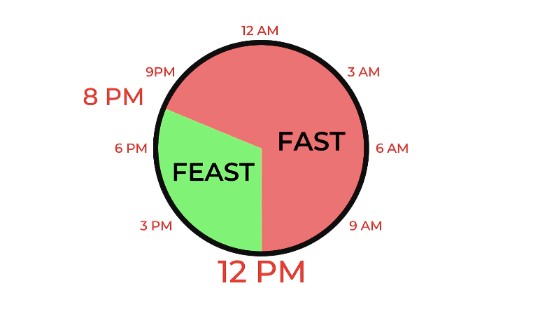 For example, only eating between 12 to 8 pm and fasting outside of these hours – it can be as simple as skipping breakfast.

The time of day of your fasting and feeding windows are of little significance. The key though is to be consistent with when they take place.

Because as emphasized in this 2009 paper on circadian rhythms:

This will best enable your body to adapt by suppressing your hunger hormone (Ghrelin) during the time of your fast.

Note that it does often take around 2-3 weeks for your body to adapt but trust me it will become much easier overtime.

Also worth nothing is that, at least in rats, research shows that females may have slightly more adverse reactions (irritability, adrenal stress, etc.) to fasting than men.

Meaning that it’s a good idea for females to start with a 14/10 protocol for example and then build up to the 16/8 overtime when you feel you’re ready.

Now as for what exactly to consume during your fasting and feeding window, it’s actually quite simple.

During the fasting period, you don’t ingest any calories or anything that spikes your insulin.

This means no food, no BCAA’s (Check out our article on what do bcaas do), no protein shakes, no juice – nothing with calories! 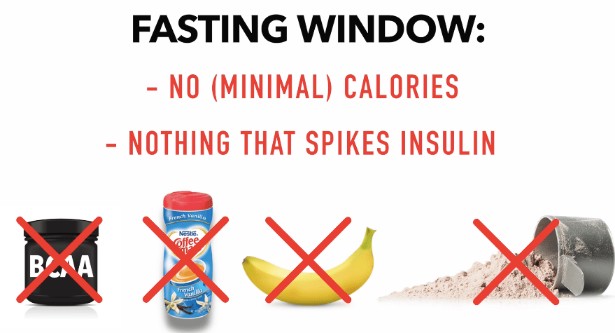 I would however suggest drinking a lot of water as well as black coffee, green tea, and/or sparkling water while staying busy to help suppress your appetite during this time.

And as for calorie free (“low-calorie” is the better term) natural and artificial sweeteners, a 2010 literature review found that most calorie free sweeteners (stevia, aspartame, sucralose, saccharin, etc.) don’t have an appreciable effect on insulin. And thus, are fine to have during your fasting period if you enjoy it in your coffee or tea for example.

A good rule of thumb is stick to 80% of your foods coming from whole, unprocessed sources with the remaining 20% being foods considered “not as healthy” or “indulgences” so to speak. 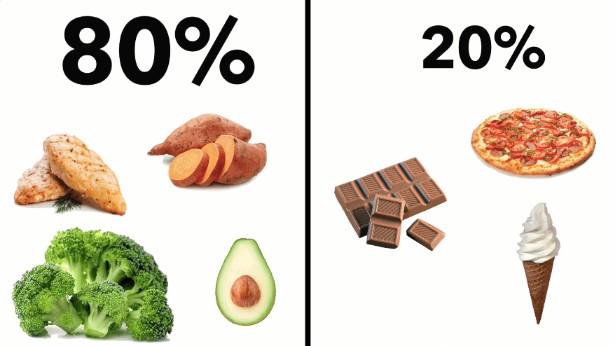 It really is that simple – so ignore all the hype about “optimizing your insulin response” and breaking your fast with certain types of foods – this overcomplicates everything and is insignificant in the grand scheme of things.

Now as for exactly how much to eat during your feeding window, as I mentioned before…

There’s no strong evidence that intermittent fasting will help you lose fat without also being in a calorie deficit.

Therefore, I’d suggest taking the advice from this 2014 paper by Eric helms and colleagues and simply multiply your bodyweight in lbs by 13.

This will provide you with roughly the amount of calories you need to ingest daily to be in a calorie deficit such that you’re able to lose around a lb a week.

And in addition to this, your protein intake will also be vital to maintain your muscle mass as you lean down. So aiming to intake roughly 0.73- 1 grams of protein / lb of bodyweight would be ideal and in agreement with the literature.

4) How Many Meals To Eat

As for the optimal number of meals to eat during your feeding window, I think the best and most convenient option is to stick with 3 protein-rich meals.

This not only enables you to have larger, more satisfying meals as you’re dieting, but as shown in this 2010 paper by Leidy and colleagues:

Although this likely varies individually, 3 meals seems to be the better option over higher meal frequencies for hunger control.

Some of you are also likely worried that 3 meals will have a negative effect on your metabolism.

Well, contrary to popular belief, as shown in this paper from the Journal of Nutrition:

When compared to eating more frequently, a lower meal frequency doesn’t cause a reduction in your metabolism. As it’s your total calorie content and composition of your meals that governs this, rather than the actual frequency at which you eat.

Do note however that research indicates there may be a slight advantage to spacing out protein over 4 meals rather than 3 in terms of maximizing protein synthesis. Meaning that if your main goal is instead to build muscle, fasting may actually be sub-optimal for this reason.

BUT – this is likely of little significance if you’re still consuming adequate protein with your 3 meals which is the more crucial factor. 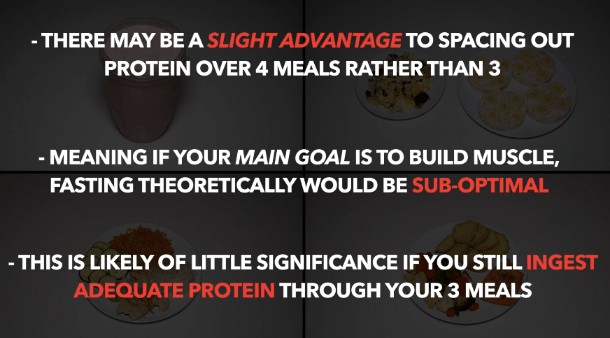 Regardless though, experiment with it and stick to a meal frequency that best suits your lifestyle.

Now as for when to train, although there are various potential benefits to fasted training (possible enhanced lipid mobilization, often greater anabolic response) and various benefits to training in a fed state (often better performance).

But the best option for you will ultimately depend on your schedule and also what enables you to perform the best in your workout.

In either case though, there are a few things to keep in mind.

In the event that you have to weight train fasted in the morning, as shown in this 2014 paper from Helms and colleagues, this is where the timing of your post-workout meal becomes of greater importance in order to minimize any potential muscle breakdown.

Meaning that you want to time your first meal such that you’re able to ingest it shortly after your workout, and it should ideally be rich in protein and carbs: 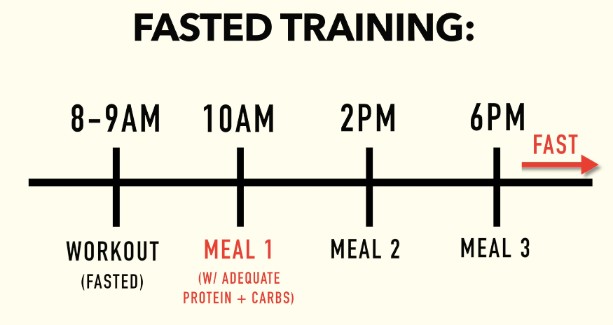 But if you’re unable to do so based on your schedule and feeding window, a good alternative is to simply ingest essential amino acids during your workout and/or a whey protein shake afterwards. 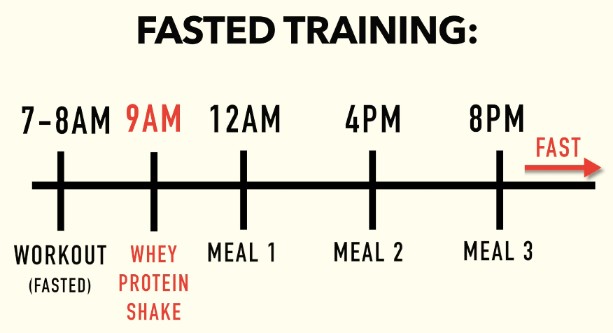 Although this will technically spike your insulin break your fast, you still get the benefit of pushing your calories later on in the day which is ultimately what makes fasting such a powerful tool for fat loss.

Whereas in the event that you train within your feeding window, for example after work, you’d want to time it such that you’re able to get in a meal or two with adequate protein and carbs before your workout and have a meal sometime post-workout as well. 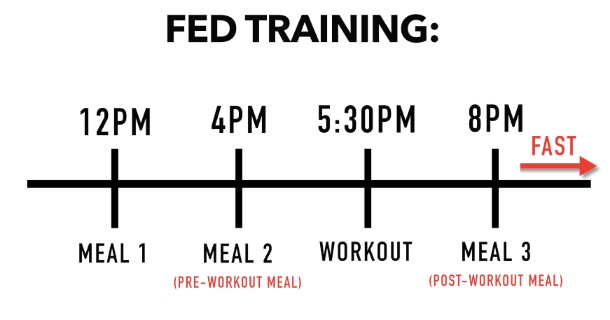 Just note that the timing of your post-workout meal now is not as important as it was with fasted training.

But again, experiment with it and see what works best for you and what you’ll be most consistent with.

So to conclude, here are the main points: 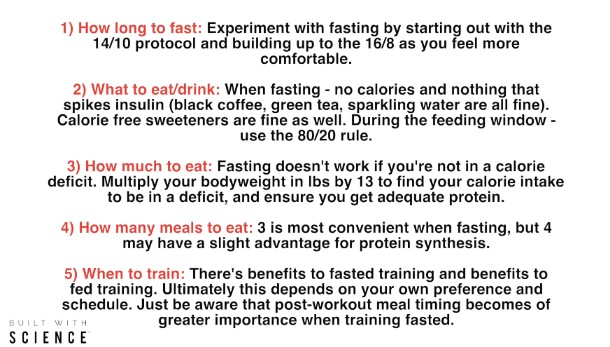 Just again keep in mind that fasting is not anything magical in terms of fat loss. But for many it does make sticking to a deficit much easier to do which is why it can be such a powerful tool to use especially when paired with the right training plan.

Then simply head on over here to take my start-point identification quiz to determine which of my 4 science-based programs is best for you.

Anyways, I hope you enjoyed the article! Let me know in the comments if you have any questions/concerns I can help you with. Don’t forget to show me your support by giving me a follow on Instagram , Facebook , and Youtube where I’ll be posting informative content on a more regular basis. Cheers!

Intermittent Fasting: How to Best Use it for Fat Loss (Step-By-Step Guide)

3 thoughts on “Intermittent Fasting: How to Best Use it for Fat Loss (Step-By-Step Guide)”