Read this article to find out how to boost your metabolism by increasing NEAT levels. And lose fat faster as a result.

Here’s Tim and here’s Tom. Two identical twins who weigh the same. Both of them want to shed some of their holiday weight gain. 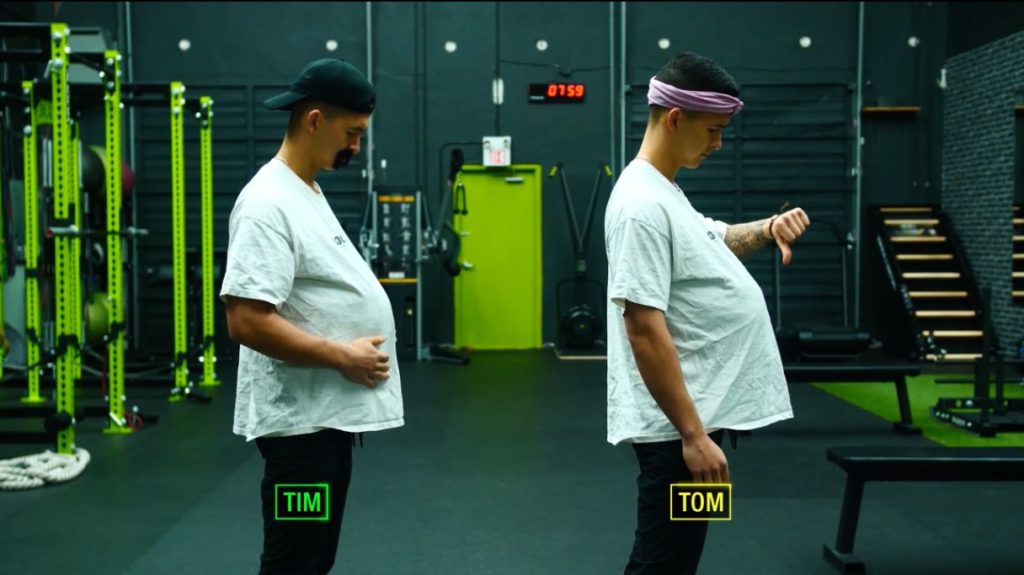 To do this, they both decide to hop on the exact same workout program. And the exact same diet plan that requires them to eat at a 500 calorie deficit of 2,000 calories. Now, note that this caloric deficit should theoretically enable them to both lose a pound a week.

After 8 weeks of doing this, Tim is right on target. He’s down 8 lbs and considerably leaner. Tom, on the other hand, hasn’t lost any weight. And has failed to see any progress despite following the exact same protocols as Tim. 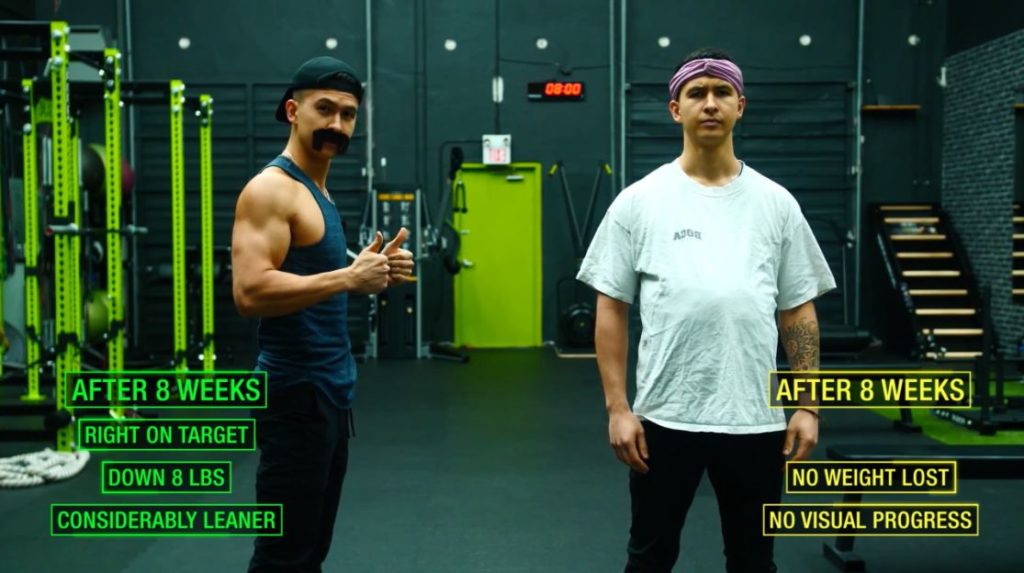 Well, for all the Toms out there, no it’s not a “slow metabolism.” And no, it’s not a “genetic curse”. Instead, it’s something a lot simpler and easier to fix.

You see, although Tim and Tom ate the same amount of calories and performed the exact same workout program week after week, it’s what they then did outside of the gym that created this discrepancy.

How To Boost Your Metabolism: Activity Outside Of The Gym Matters

Tim arrives to work and always makes it a point to take the two flights of stairs every time he goes up to and down from his office. Tom, on the other hand, is a little tired from the workout and prefers the elevator.

During the workday, Tim works at his standing desk and paces around during his calls. Tom? Well, he prefers sitting at his desk.

During a break, Tim walks over to the nearest coffee shop coffee. But Tom stays deskbound.

After their long day at work, Tim decides to do some housework. And then walks over to pick up his takeout for dinner. Tom, on the other hand, calls it a day and orders in his dinner while bingeing on Netflix.

And this is exactly where the problem lies. All of the subtle additional movements that Tim made after his workout enabled him to stay at his calorie deficit. As a result, he was able to lose his goal of 1 lb per week. Whereas Tom burned significantly fewer calories throughout the day. This completely offset the calorie deficit he thought he created, thereby explaining why he didn’t experience any fat loss. 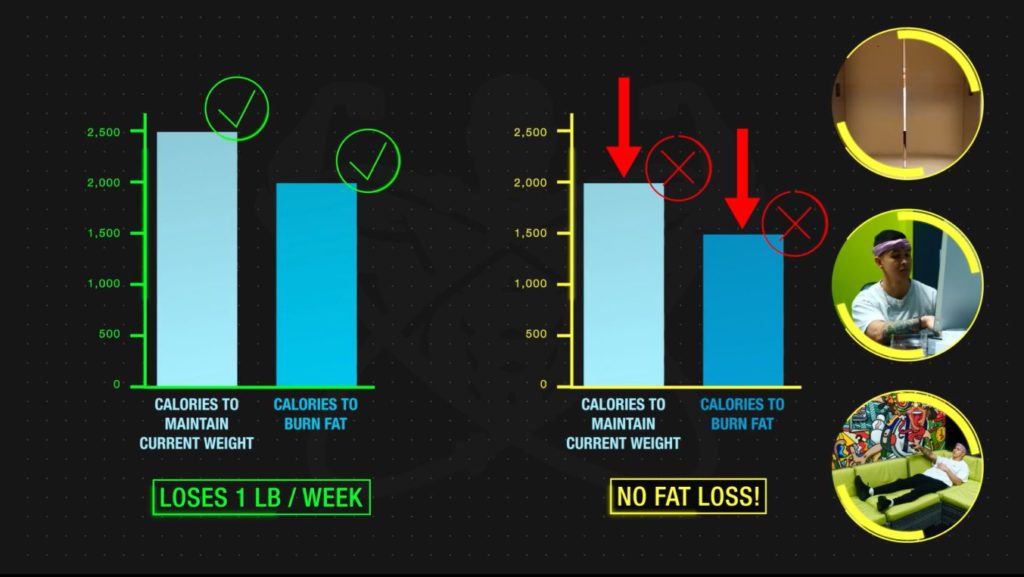 It All Boils Down To NEAT (Non-Exercise Activity Thermogenesis)

And this is the exact problem that most of those claiming to have “slow metabolisms” really have. It all boils down to something called non-exercise activity thermogenesis (or NEAT).

NEAT is just a fancy term to describe all of the additional calories burned from movements you do during the day that isn’t exercise. So, for example, walking, cooking, and even fidgeting. And as we saw earlier with Tim and Tom, this can easily equate to drastic differences in the calories you burn throughout the day. And can as a result easily boost or hinder your fat loss efforts.

There Are Inter-Individual Differences In NEAT Levels

As shown in a paper from the Journal of Clinical Investigation, even when subjects were fed the same diet and locked in the small respiratory chamber pictured here for 24 hours, there was still a difference in additional calories burned through NEAT that day, ranging from 100 to even up to 800 calories between subjects. 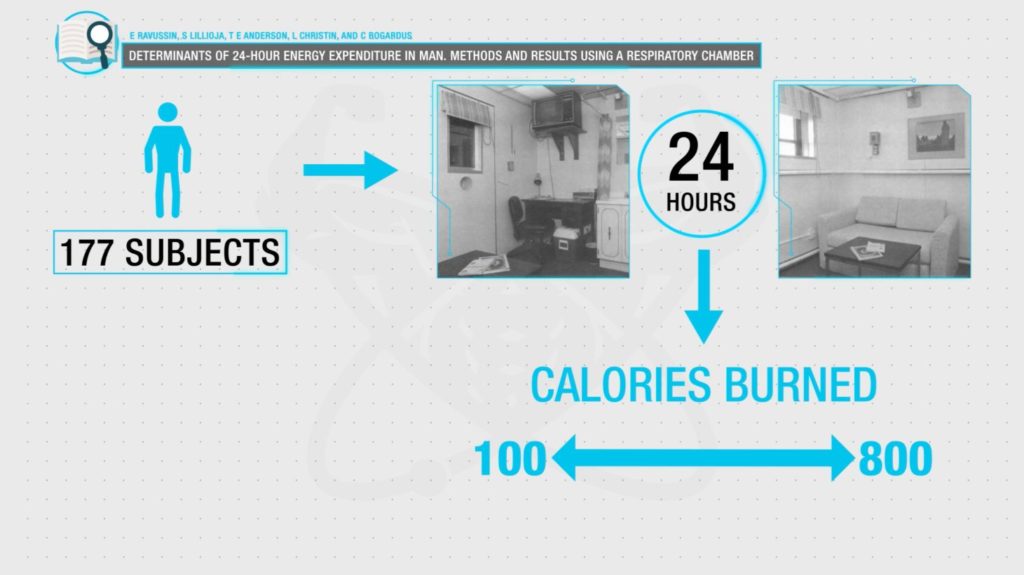 NEAT Levels Decrease When You’re On A Diet

And the problem for a lot of people is that research has shown that upon starting a diet, calories burned through NEAT tends to significantly decrease. And continues to decrease further the longer you diet for. Eventually, this can reach a point where you’re burning so few calories outside of the gym that you’re no longer in a deficit. This is despite you eating less and training regularly, which then leaves you stuck at a plateau. 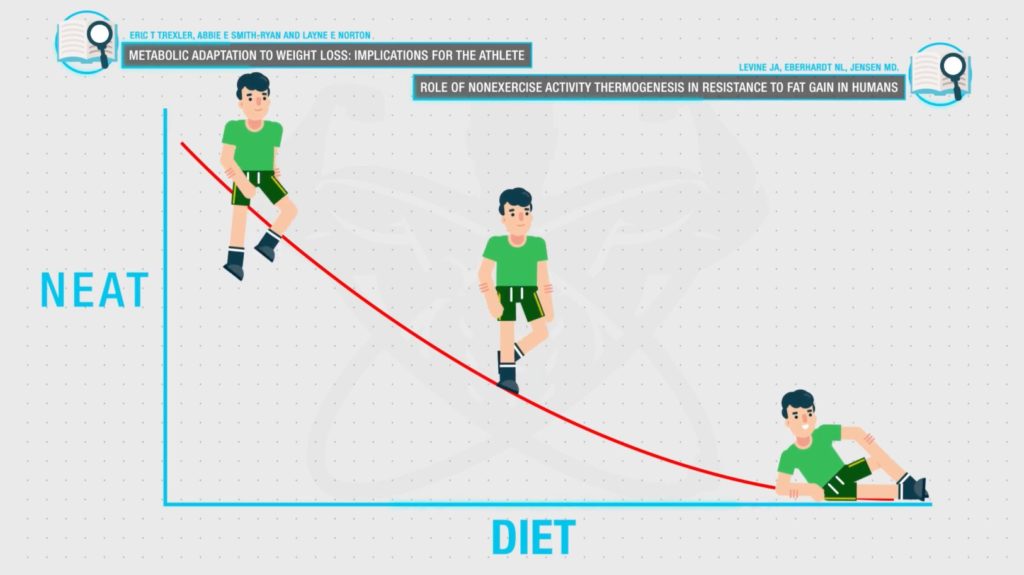 Similar to Tim and Tom’s scenario, there have been papers that have shown that even when a pair of identical twins were put on the exact same diet and exercise program for 90 days, one ended up losing over 25 lbs. Whereas the other lost just 7lbs due to their differences in NEAT. 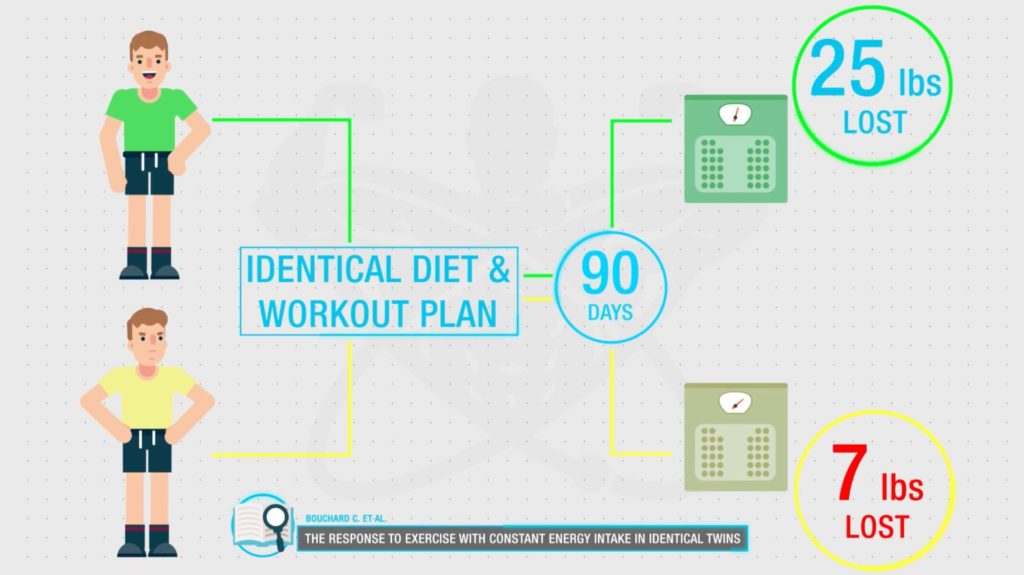 So what can you do to prevent this from happening for you?

How To Boost Your Metabolism: Don’t Attempt These Weight Loss Plateau Solutions

Well, first let’s go through what not to do.

Because the first thing people do whenas a weight loss plateau breaker is they’ll either increase their cardio in the gym a little more. OR they’ll eat a little less. And although this is a viable solution, it only works up to a point. And can eventually actually counteract your efforts.

This is because recent studies have found that adding in cardio only increases your total daily energy expenditure up to a point. After this, it plateaus despite doing more and more cardio. 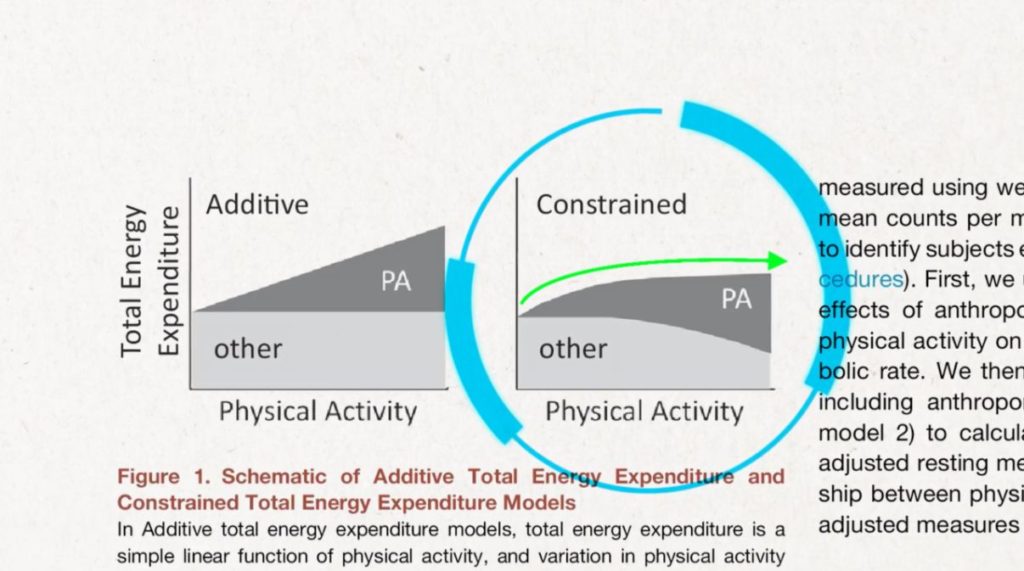 This is because some people’s bodies will compensate by moving a lot less after their workout. Multiple papers have shown that sometimes people will compensate with a reduction in activity after their workout. To the point where they would actually burn more calories from the daily movement if they didn’t work out! Meaning that adding in cardio failed to help them burn more calories by the end of the day. And actually provided the opposite effect.

So while additional cardio may help up to a point, it can very quickly start to counteract your fat loss efforts. And you’d instead be much better off focusing on the hours you spend outside of the gym instead. 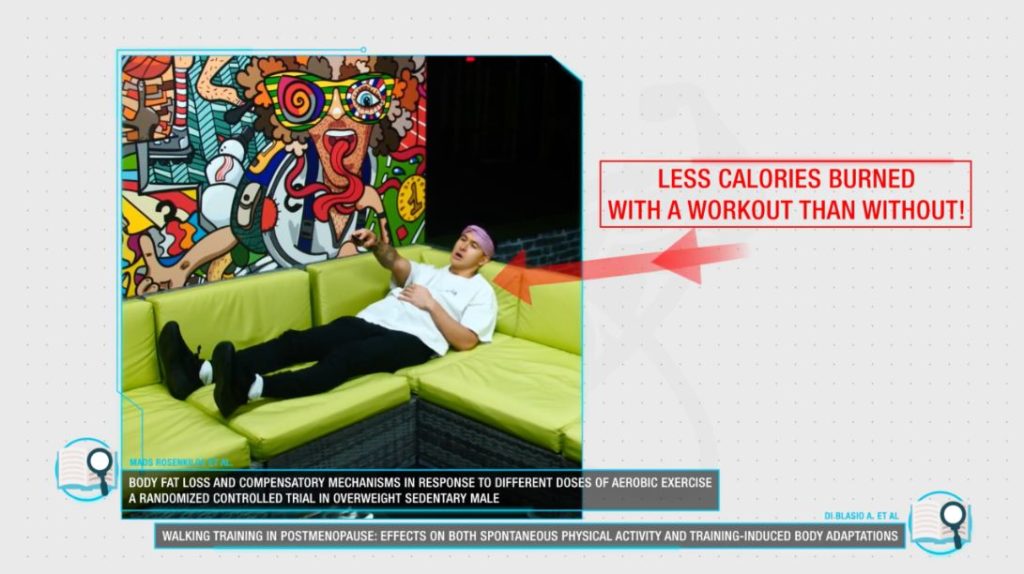 Now as for just eating less, again, this is helpful up to a point. In general, for better adherence and maintenance of muscle mass, your goal should be to keep your calories as high as possible throughout your diet. While still hitting your fat loss targets. Otherwise, you’ll quickly reach a point where your calories are just too low and not feasible to maintain.

How To Increase Your NEAT Levels

That being said though there are some other viable options that have been shown to be effective solutions when it comes to how to increase your NEAT.

How To Boost Your Metabolism 1: Move More

So, how to boost your metabolism? Well, the first and most effective solution is simply to make conscious efforts to move more outside of your workout. In fact, research like this paper from the Journal of Obesity has shown that even in mostly sedentary individuals, those who are leaner still tend to stand and move more in general outside of the gym than those who are overweight. And this then enables them to burn more daily calories and maintain their lower levels of body fat. 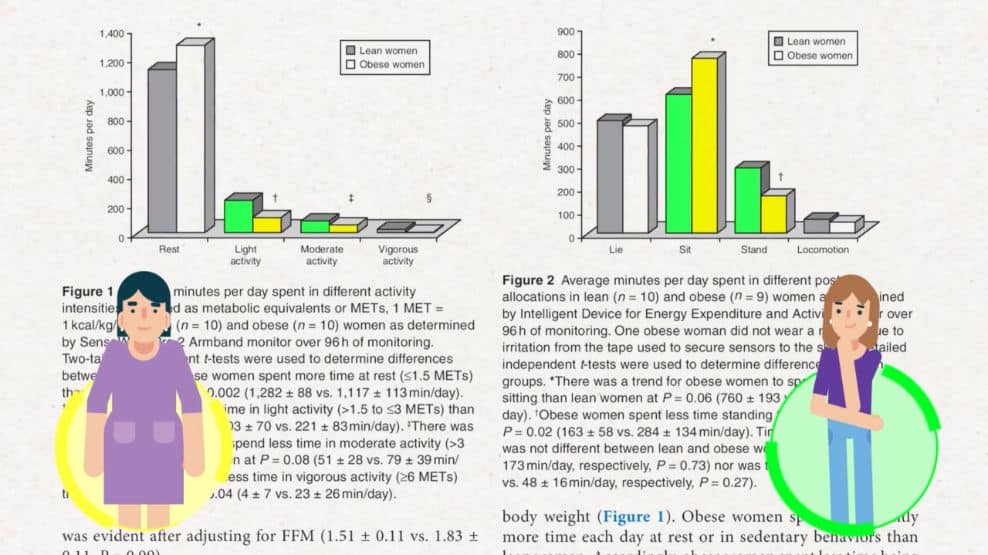 Although this may sound very difficult and time-consuming to do, that isn’t the case at all. Even if you don’t live a very active lifestyle in general. And to showcase this, let’s look at the results of a paper from the Journal of Clinical Nutrition, which compared the caloric burn of 8 different conditions.

As you can see in the following graph, compared to sitting down motionless which burns roughly 80 calories an hour, you can easily burn an additional 40 calories an hour by sitting and “fidgeting.” Now, fidgeting just refers to incorporating subtle movements like toe-tapping, stretching your legs and arms, or flipping through papers for example. 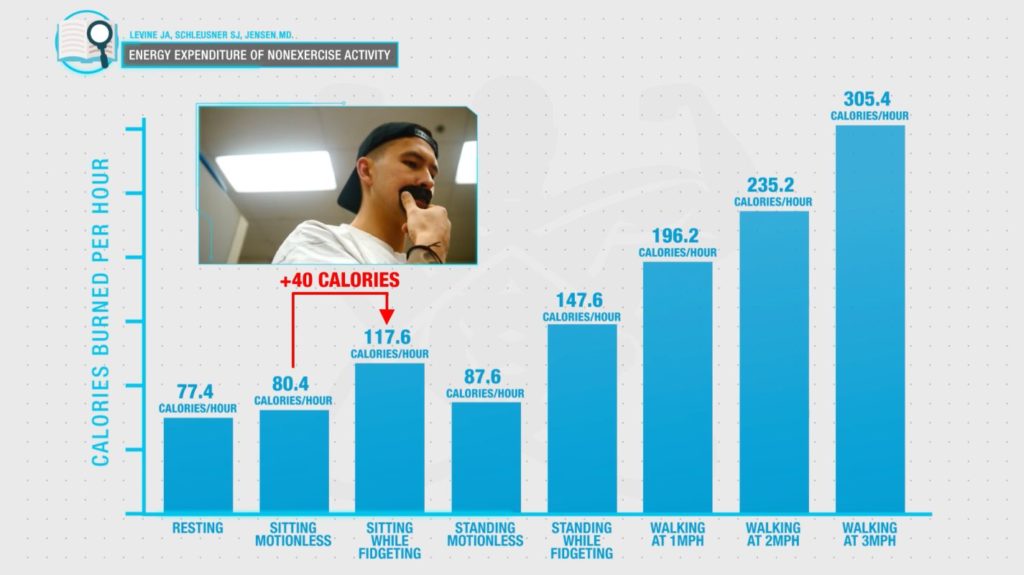 And you can increase NEAT metabolism even further by an additional 30 calories an hour by instead standing and fidgeting. Which involves similar movements but can involve pacing around the room for example. 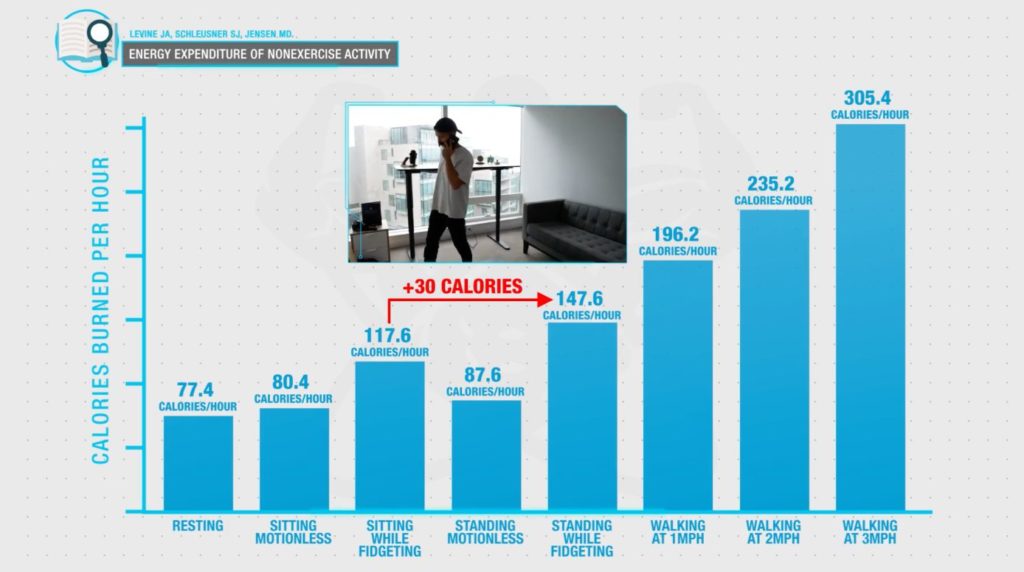 How To Boost Your Metabolism By Increasing NEAT: Actionables

To put this data into perspective, let’s go through a calculation of how many additional calories you could potentially burn by applying some of these tips to burn fat faster over the course of your day.

Amounting to a total of roughly 450 additional calories burned per day. And if we run a quick calculation on that, that amounts to almost an extra pound of fat loss per week. Which over the course of the year would amount to almost 50lbs of fat burned just by focusing on moving a little more outside of the gym. 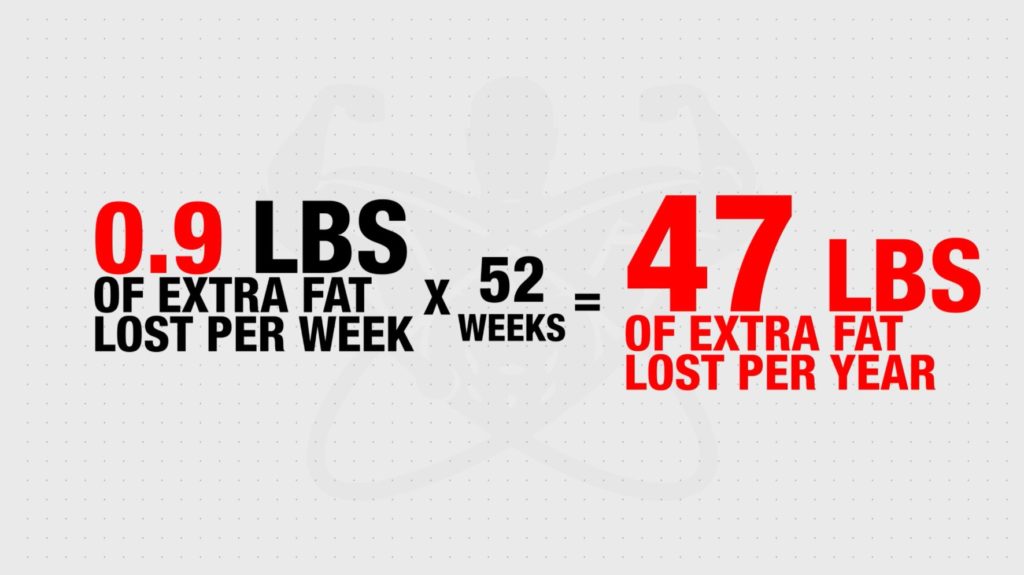 On that note, I would also highly recommend tracking your steps. And actually setting a daily step goal for yourself to hit, as this will give you a much better indication of what your overall NEAT levels are and a way to track it throughout your diet. 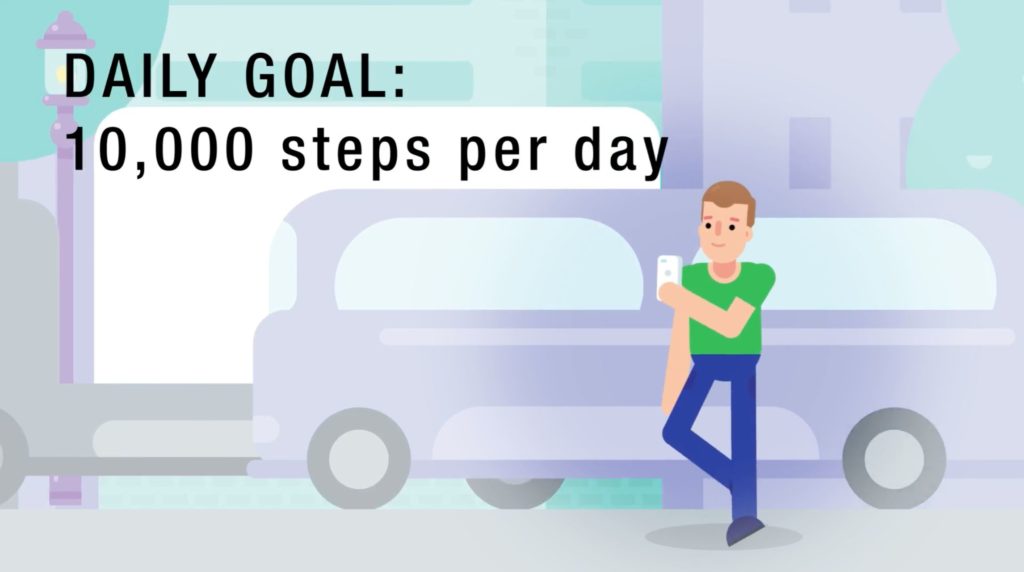 Now in addition to what I previously went through, some other things you should be implementing and prioritizing throughout your diet when it comes to how to boost your metabolism would be (2) diet breaks and (3) regular resistance training.

How To Boost Your Metabolism 2: Diet Breaks

This is because controlled and monitored diet breaks, something I’ve talked about in my past article on How To Lose Fat And Gain Muscle, have been shown to help counteract the decrease in NEAT that you typically experience with your diet. And is something I’d highly recommend you start implementing to help boost your fat loss in the long run.

How To Boost Your Metabolism 3: Resistance Training

And as for resistance training, research has shown that a weight training workout appears to actually increase your NEAT levels for the rest of the day. Which is in contrast to the reduction in NEAT we typically see after cardio sessions. Simply meaning that regularly performing weightlifting workouts throughout your diet is essential and should take priority over trying to perform a ton of cardio. 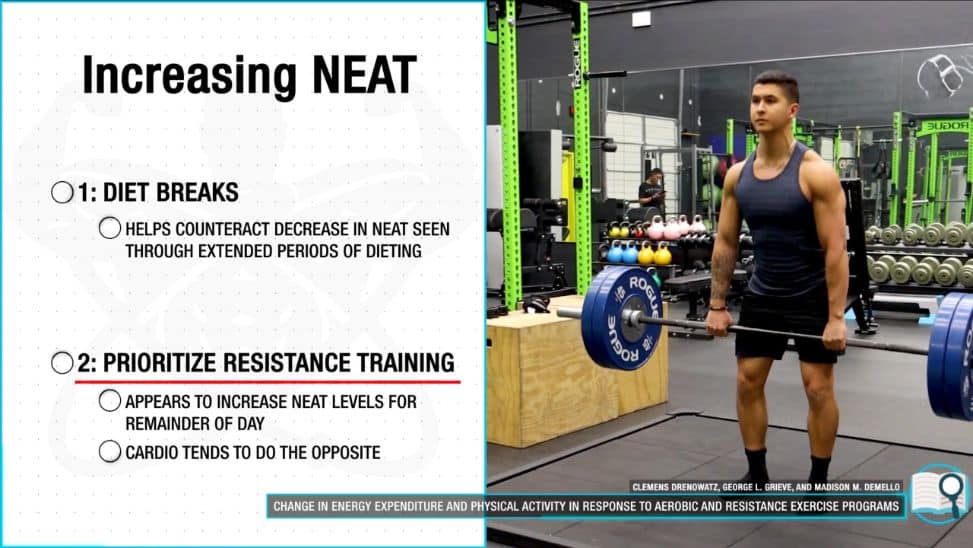 How To Boost Your Metabolism With NEAT: Conclusion

But all in all, you need to realize that although you may spend 30 minutes to an hour exercising, there are still 15 other waking hours during the day. And it’s what you do during those hours that will make the most impact on your fat loss progress. And for a step-by-step program that puts all of the science together for you by showing you exactly how to both optimally train and structure your diet week after week to burn off fat and lean down as quickly as possible, just like several other members have successfully done with their Built With Science programs:

I hope you enjoyed this article and have learned how to have a fast metabolism by increasing your NEAT! Don’t forget to give me a follow and connect with me on Instagram, Facebook, and Youtube as well, in order to stay up to date with my content.

How To Boost Your Metabolism With NEAT (11 Studies)