There's no doubt about it. If you're like most people, 'How to get a six pack' will be a common searched-for term on Google. Well, good news! I show you exactly how you can do so in this article.

Most of us know that when it comes to how to get a six pack... We need to get to a low enough body fat percentage for them to start peeking through. The same is true for any muscle, for that matter. But there's something else, too. We have to train our abs the right way. Because just like any other muscle, they will respond with growth. And, as a result, your six pack will be even more visible and better looking as you start chipping away at the fat covering them. So, in this article, I’ll cover 3 fixes that you need to make with the way that you train your abs. These fixes will help you actually target and grow your six pack much more effectively.

But of course, if you’re not just looking to develop your abs, then you’d benefit from one of our programs. These go through, step-by-step, how you can develop a well-rounded physique. If you’re interested:

The first mistake you’re making with your ab training is letting your hip flexors take over the movement. But why does this happen in the first place? As it turns out, abs exercises like:

... Involve a great deal of hip flexion. Which, as the name implies, is the main function of our hip flexors. And research has shown that if:

... Then your hip flexors will be more likely to take over. And, as a result, reduce the involvement of the abs during these movements. Which is obviously detrimental for our overall abs development as well. But, more importantly, can also create a problematic imbalance between our hip flexors and abs strength. And this, in turn, can potentially lead to back issues and pain down the road.

One way to address this is by simply changing your focus during your abs exercises. Ignore what your legs or upper body are doing during the movement. And, instead, focus on your pelvis. 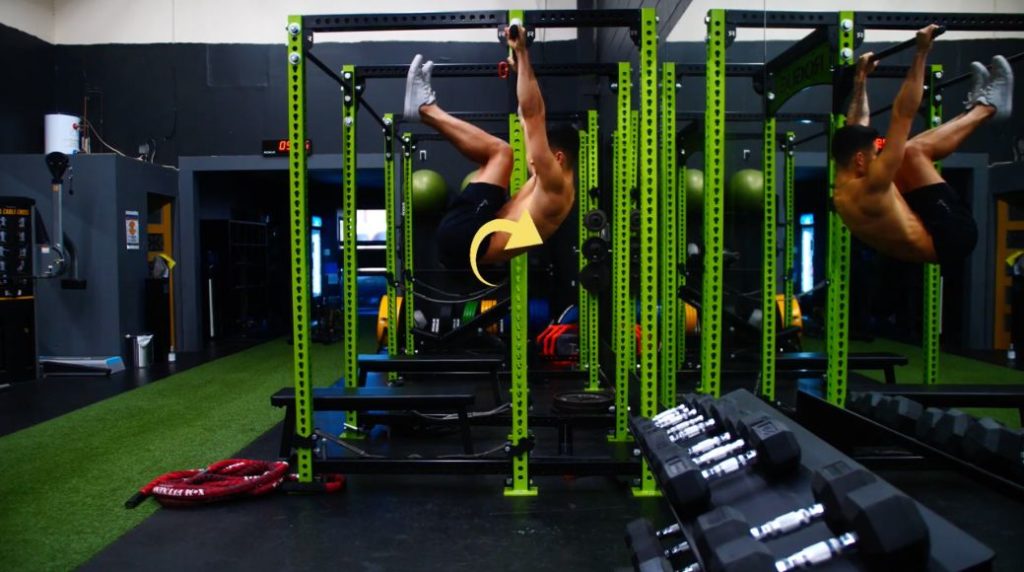 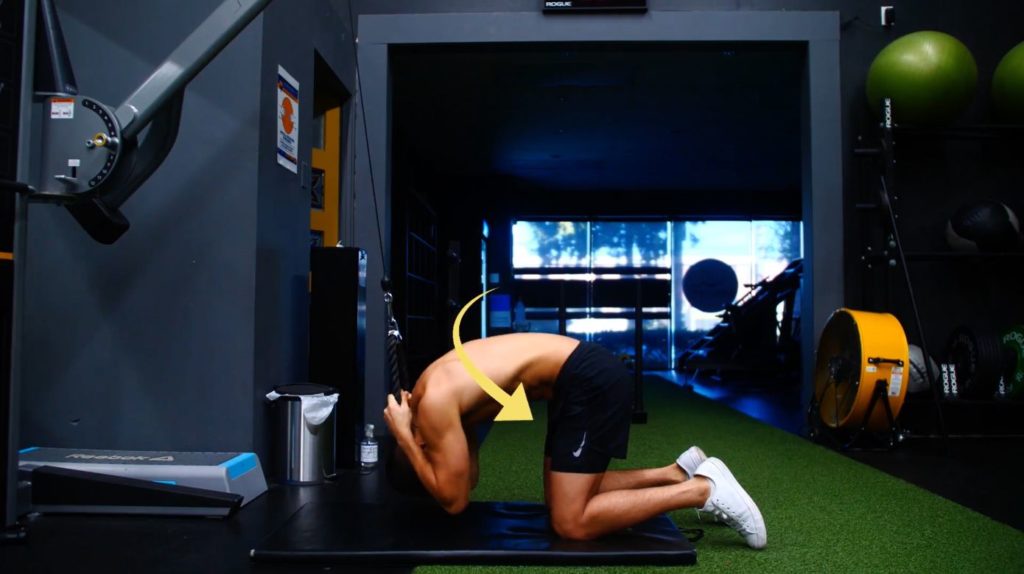 This mindset shift alone will do wonders in terms of helping you feel the movement more with your abs and less with your hip flexors.

Going beyond this though, another solution is to tweak your current abs training to help take the hip flexors out of the equation. For example, during sit-ups, one solution is to perform what’s called the Janda sit-up. This is a move devised by Czech physician Vladimir Janda. And how it works is through a concept called reciprocal inhibition. Impressively, this move has been shown to reduce the activation of the hip flexors by using a band to force the hamstrings to remain contracted throughout the sit-up. 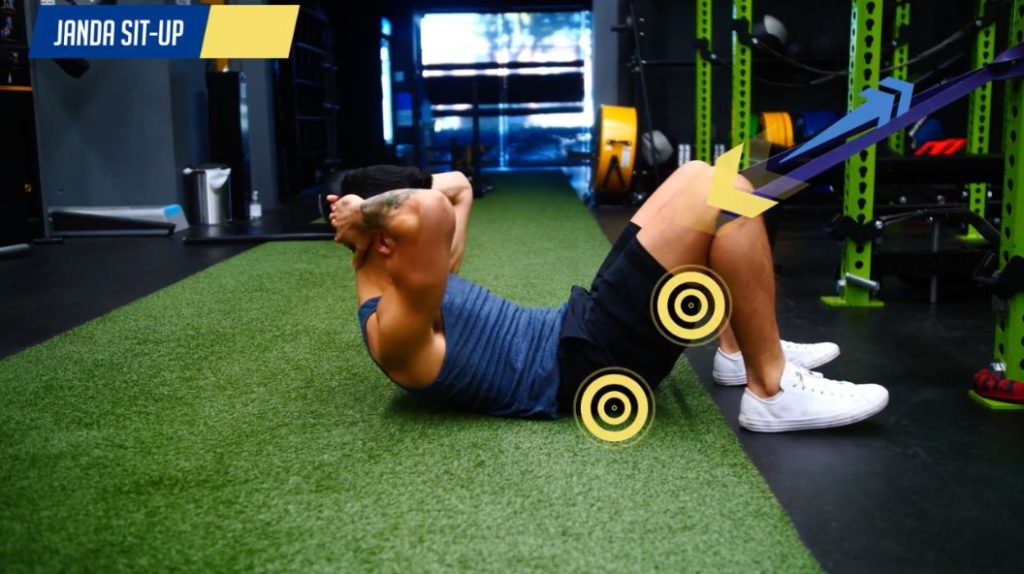 If you don’t have a band, you can use a ball behind your knees. And again, focus on contracting the hamstrings and glutes. And even with something like cable crunches, the same concept can be applied. What you’ll find is that this simple tweak will force your abs to work much harder than you’re used to. And, eventually, you’ll be able to strengthen your abs and improve your mind to muscle connection with them to the point where these modifications will no longer be needed. 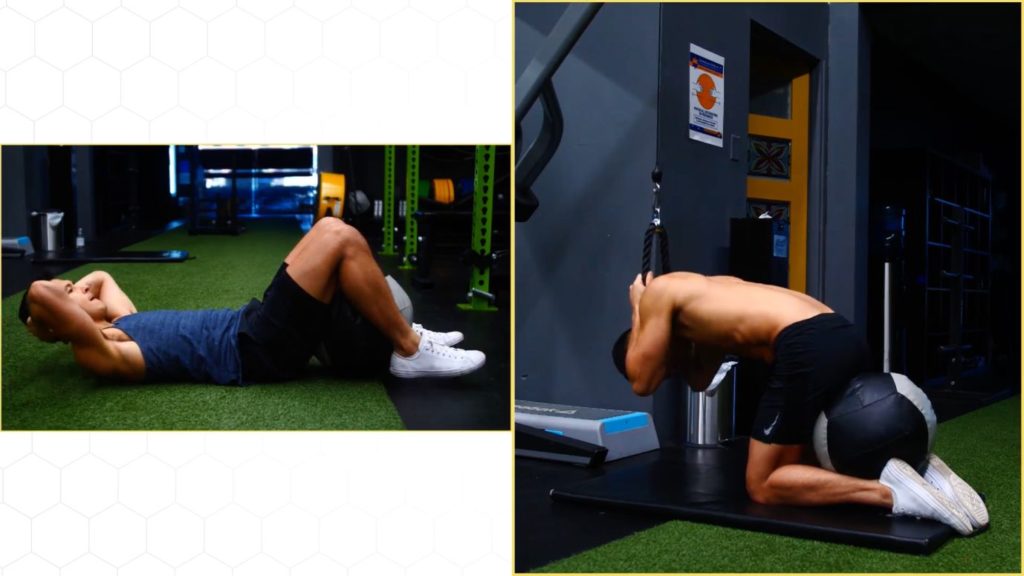 By the way, if you’re someone who enjoys learning about the ‘whys’ of exercise selection, you’re absolutely going to fall in love with our 3-on-1 coaching program. My team of experts here at BWS – and I – will always take the time to explain the rationale of an exercise included in your personalized training program. Find out more about how we can help you achieve your dream physique below:

Cut Your Range Of Motion

In addition to this though, during moves like the reverse crunch, most people are unaware that the range of motion of the abs during this movement is actually quite short. How short? Well, on the way down, as soon as you pass roughly 90 degrees, your abs begin to do considerably less work. And your hip flexors will start to take over instead. 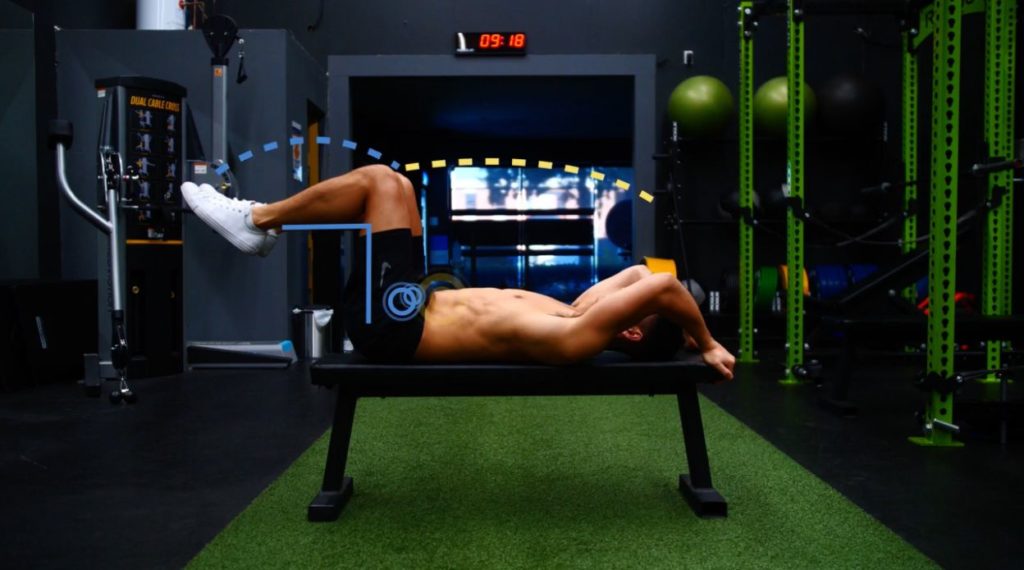 What does this mean for you? Stopping this short on the way down is a very easy way to again shift more tension to the abs. In turn - minimizing the involvement of the hip flexors.

The next mistake you’re making when it comes to how to build six pack is failing to initiate and maintain what’s called a posterior pelvic tilt during your abs exercises. 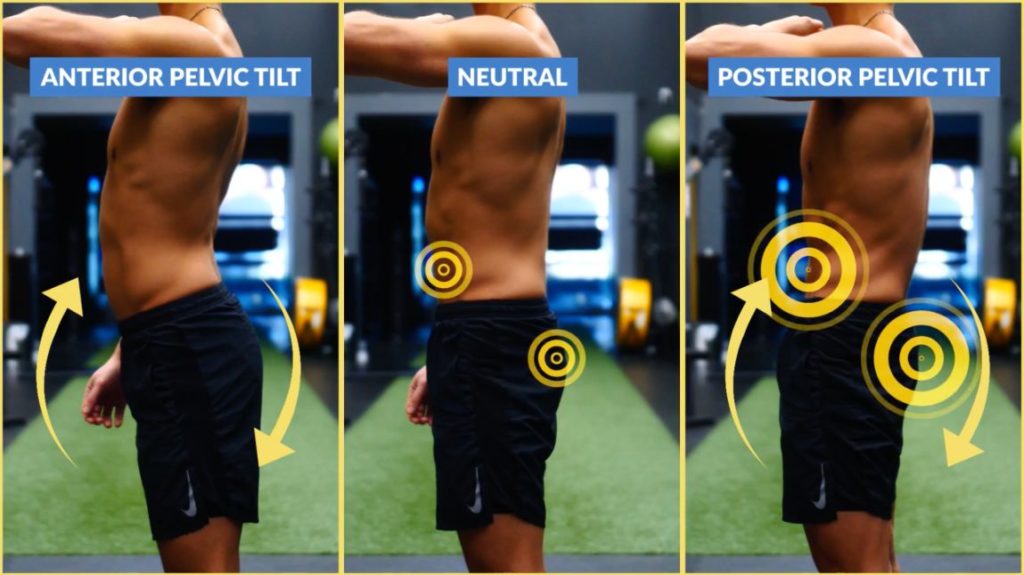 This subtle movement of tilting the pelvis by contracting the glutes and abs is another key function of the abs. And has been shown to do 2 important things:

This is highlighted in a 2008 paper from the Journal of Strength and Conditioning Research. The paper found that properly initiating and maintaining a posterior pelvic tilt during a move as simple as a lying leg raise led to:

... When compared to a neutral or anteriorly tilted pelvic position. In fact, as you can see in the graphs, hip flexor activity increased, and abdominal activity decreased as subjects got further away from a posterior pelvic tilt.

A similar finding was showcased in another paper analyzing lower abs activity during the reverse crunch. So, realize the importance of this. Apply this subtle tweak to all of your abs exercises. For example, during the reverse crunch, initiate the posterior pelvic tilt by contracting your glutes and abs before you go to perform each rep. And maintain that position as you go through each rep.

The same applies for moves like hanging leg raises, sit-ups, ab roll-outs, and even planks. Make this change and you’ll instantly feel a much greater contraction in your abs. And it's not just that, as well. You'll also notice less involvement of other muscle groups like the hip flexors and lower back that we want to keep out of the movement.

Admittedly, our abs are indirectly worked during many of our compound exercises. But research has shown that they are stimulated to a much higher degree during direct abs work. And would, therefore, respond better with growth.
You can think of it just like any other muscle. Take your arms, for example. Most people will be able to maintain their arm size and see some growth just from the indirect arm work from compound exercises like the bench press and pull-ups. But more often than not, they can get better results by adding in some additional direct arms work. And the same applies when it comes to building the abs.

But then, when you do add direct abs work, approach it like any other muscle group. A lot of people will make the mistake of training their abs several times a week with:

Instead, when it comes to how to train abs, treat them like your other muscle groups. Provide them with adequate attention and volume. And also with adequate rest. As they get stronger over time, overload your abs exercises with additional weight or difficulty instead of simply sticking to the same routine over and over again. By training them in this fashion and as shown in the literature, they’ll respond with growth the exact same way that any of your other muscles would.

How To Get A Six Pack: Takeaway

All in all though, as mentioned earlier in this article, realize that while ab training does help to build your six pack, you need to combine this with a proper nutrition plan designed to then reveal your hard work and to get your abs more visible. The exact same is true for all of your muscle groups. Focusing all your efforts on training while remaining oblivious to the importance of your nutrition will get you nowhere.

But for a step-by-step program that shows you exactly both how to train (including how often you should train abs) and how to eat week after week so that you can not only build muscle but then also strip off the fat covering it to reveal that hard-earned muscle, just like several of our members have done with their Built With Science programs, then:

Anyways that’s it for today guys! I hope you all enjoyed it and now know how to get a six pack! Don’t forget to give me a follow and connect with me on Instagram, Facebook, and Youtube as well, in order to stay up to date with my content. 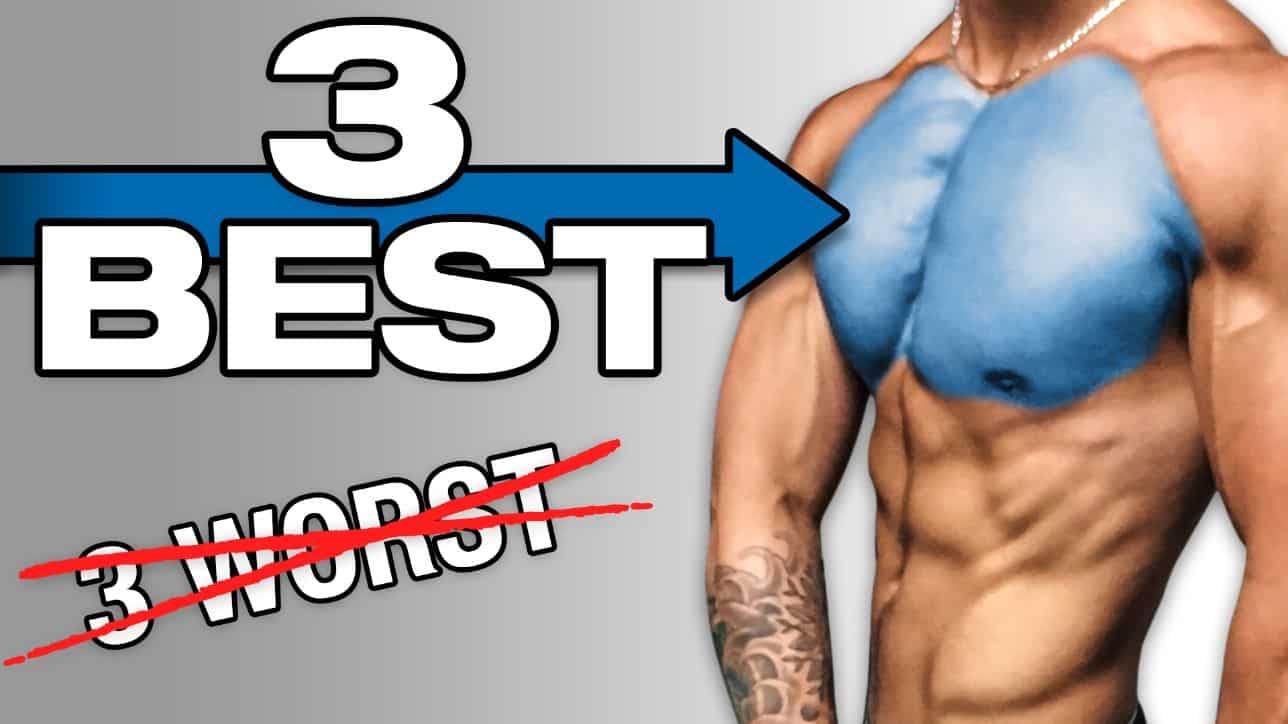 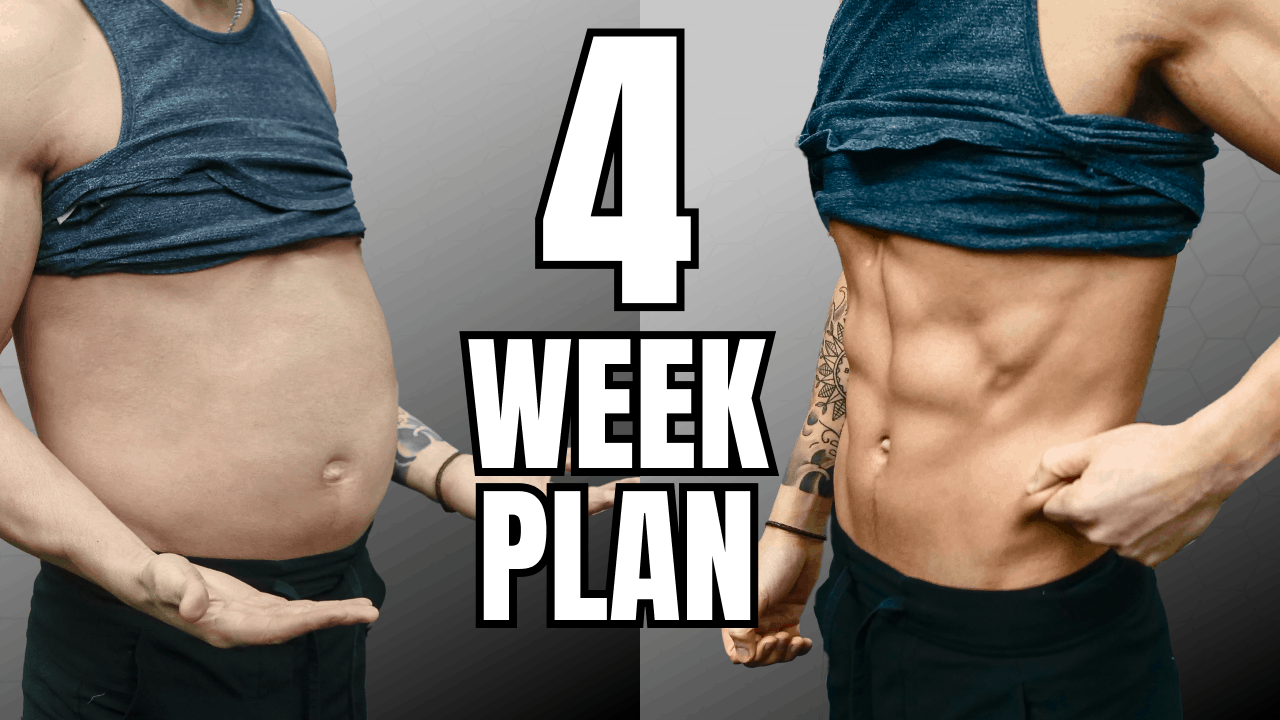