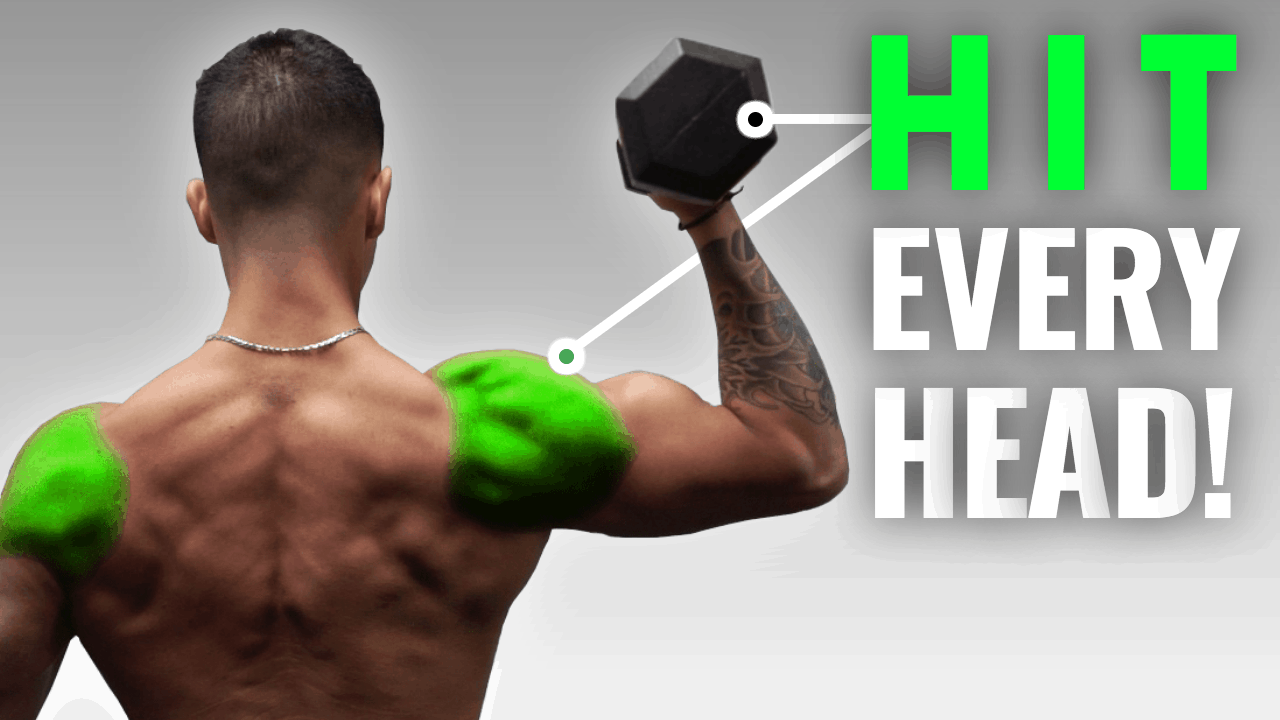 In this article, you'll be taken through four of the best dumbbell shoulder exercises.

Big, well-defined, and balanced looking shoulders are essential when it comes to developing a broad, powerful looking upper body.

But achieving boulder shoulders is no easy feat.

One of the biggest mistakes people make with shoulder training is failing to incorporate enough dumbbell exercises into their routine.

Dumbbell shoulder exercises are crucial as they help to prevent muscular imbalances or asymmetries from developing.

In this article, we'll be covering four dumbbell shoulder exercises which will help take your shoulders to the next level.


Looking to learn how you can target each of your muscle groups appropriately (and effectively) – in addition to the shoulders? No worries. I’ve got you. I’ve designed every program of mine to be an all-in-one, science-based process that’ll get you to your dream physique FAST:

The Anatomy Of The Shoulders

Your shoulders have three major muscles, also known as deltoids: 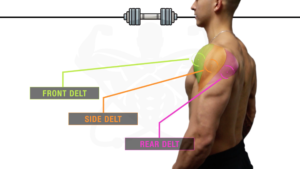 It's critical to develop all three shoulder heads.

If one head is imbalanced, then this can lead to poor posture and an increased chance of injuring yourself.

Your shoulders are one of the most fragile joints, which are why rotator cuff injuries are so common.

Pushing exercises will overdevelop the front delt, but without enough pulling exercises, you will have poor posture and imbalanced shoulder development.

Some compound shoulder movements target all three heads (such as a DB shoulder press). However, to truly stimulate and grow the rear delt, it's important to incorporate dumbbell shoulder exercises which target specific shoulder heads.

Shoulders are important for aesthetics too.

Large boulder shoulders complete your physique and give the illusion that you're bigger with clothes on and off.

If you'd like to increase your shoulder development, then stick around. I'll be going through four of the best dumbbell shoulder exercises that will help target all three shoulder heads for maximum growth. 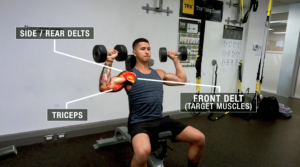 One of the best dumbbell shoulder exercises is the shoulder press.

The shoulder press can be done standing or seated. Both variations will effectively target the front delt. Dumbbell shoulder presses will also activate the middle and rear delt.

This exercise will act as your primary compound movement for the shoulders.

Seated and standing shoulder presses both have pros and cons that you'll want to consider. 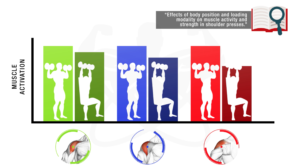 The reason for greater activation in standing shoulder presses is due to the stabilization role of the shoulder muscles. When you're standing, your shoulders are more challenged when you’re pressing compared to seated.

The downside with the standing version is that you can't go as heavy, and according to research, you'll be able to lift around 10% less. 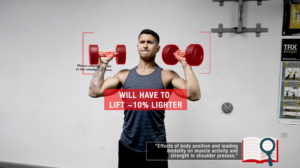 Once you get to heavyweight with a standing shoulder press, it becomes difficult to continue overloading with more weights. Mostly because getting the dumbbells into the right starting position standing is tricky.

Whereas with the seated version, you’re able to both lift heavier weight and can more effectively overload the exercise with weights. When you're seated, you can 'kick' the dumbbells up into the starting position without much effort.

In terms of isolating and developing your shoulder size over the long-term, one could argue that the seated version would be ideal.

In either case, you’ll want to perform the press correctly.

One key mistake you’ll want to avoid is flaring the elbows out as you press. 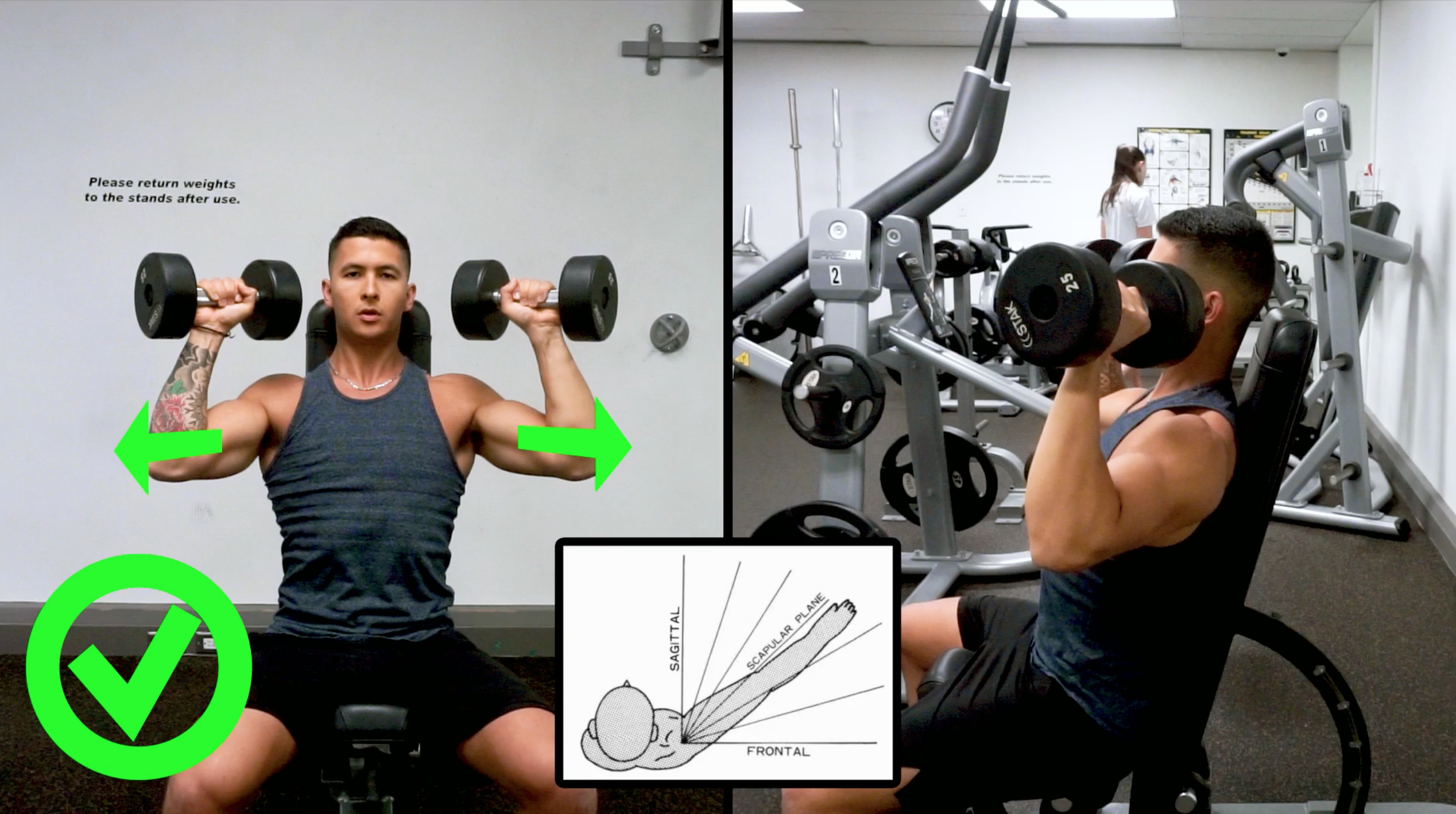 Instead, keep your elbows tucked forward slightly in something called the scapular plane.

This has been shown in multiple biomechanical analyses to be a much safer and more comfortable position for the shoulder joint to be in as you press.

In addition, it’s vital that you avoid arching your lower back, especially as you fatigue.

You can prevent this from happening by keeping your core tight through the press. Contracting your core will help with your overall stability. A tight core means a healthier, and stronger press. 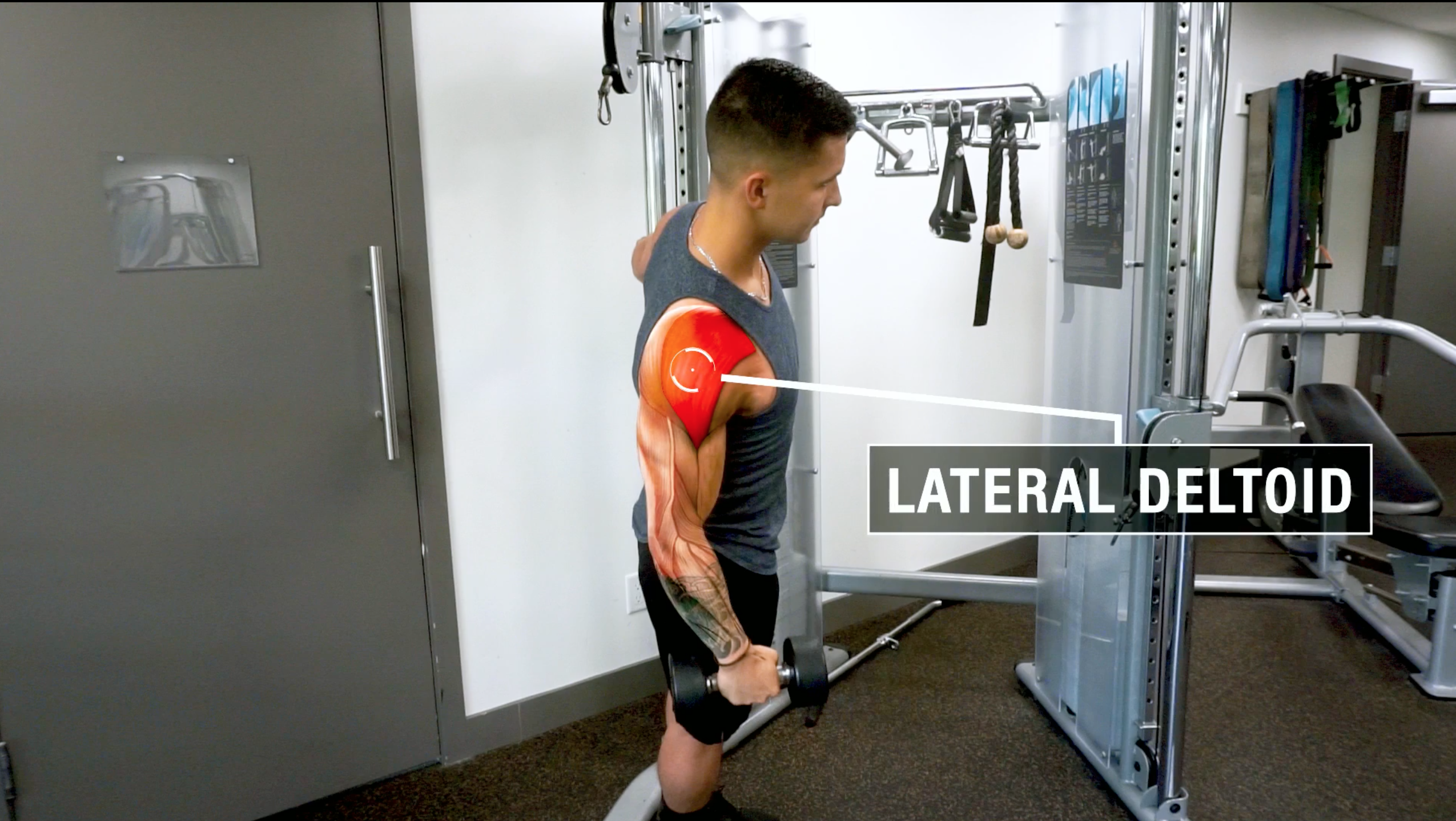 The next exercise is going to target the lateral deltoids or mid-delt.

Lateral raises are likely your best bet for growing this portion of your shoulders.

Research has consistently shown that lateral raises elicit the highest activation when compared to other common shoulder exercises (study). 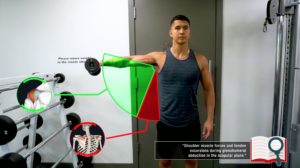 To make the movement even more effective, you can slightly lean in the direction of the raise by hanging onto a fixture with one hand.

You may have seen people do this in the gym before.

A slight lean while performing a lateral raise has been explored in a study. Researchers found that the supraspinatus, which is a rotator cuff muscle, is more active during the beginning of a lateral raise. Whereas the side delts only become more active after around a third of the way up.

As shown in the image below, the side delts now remain highly active to the end of the range of motion at the top.

By leaning away, we effectively remove the beginning portion of the raise where the supraspinatus is most active. This position enables us to activate the lateral deltoid through a full range of motion. 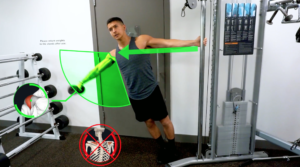 Here are two cues to remember for the dumbbell lateral raise:

These two cues should help you better activate the side delts and prevent the upper traps from taking over.

By the way, if you’re someone who enjoys learning about the ‘whys’ of exercise execution, you’re absolutely going to fall in love with our 3-on-1 coaching program. My team of experts here at BWS – and I – will always take the time to explain the rationale of a lifting cue included in your personalized training program. Find out more about how we can help you achieve your dream physique below: 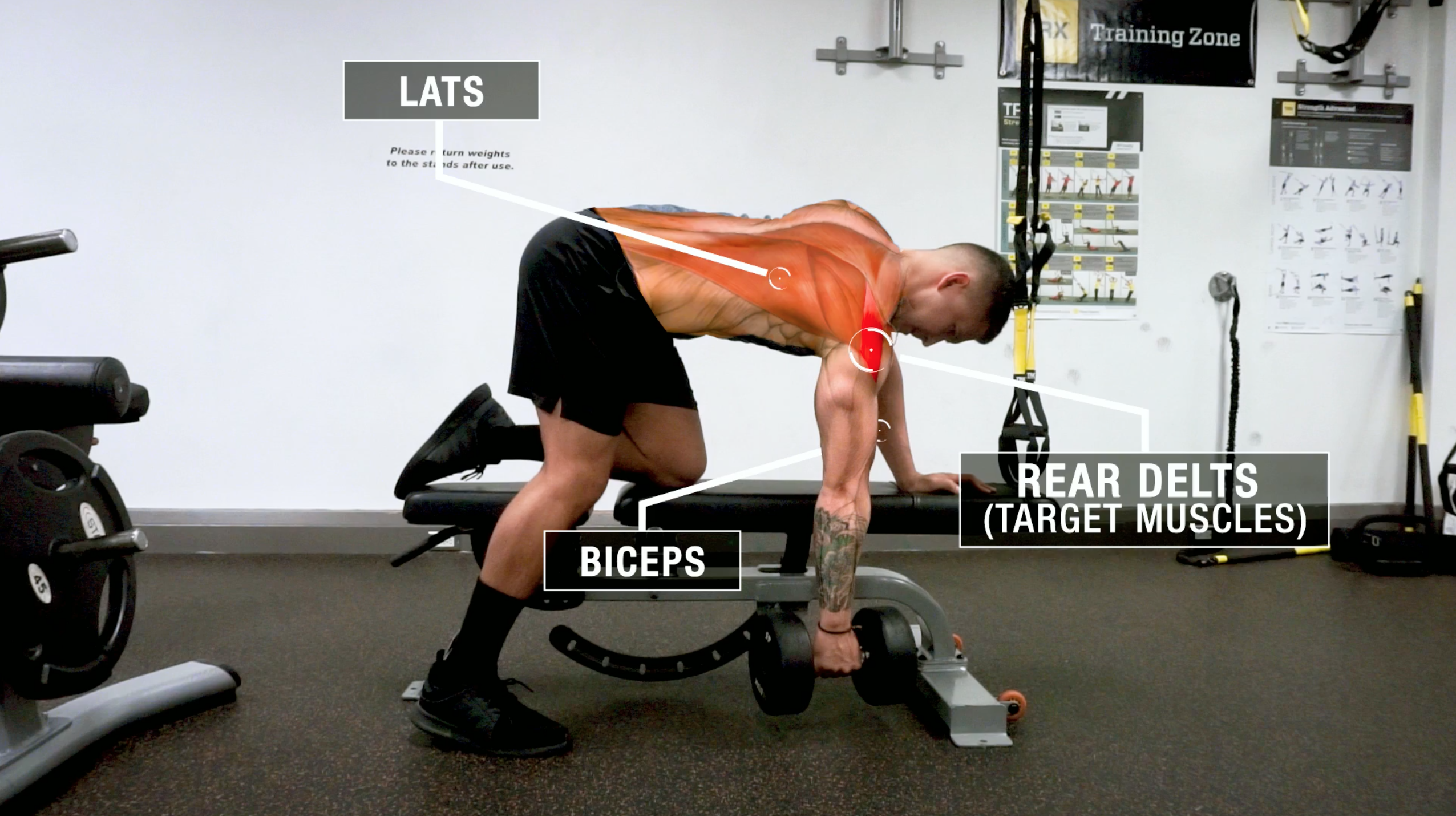 Next, we’re going to use the rear delt dumbbell row.

This exercise will shift more of the focus onto the rear delts. Rear delt dumbbell rows will also activate back musculature and the lats as well.

This exercise is a great choice to add mass to the rear delts since it enables you to use heavier weights than rear delt isolation movements such as reverse flyes.

The key to maximizing the effectiveness of this exercise comes down to how you perform it.

As you can see in the image above, I’m performing what looks like a dumbbell row. A dumbbell row is typically performed to target the lats.

However, by letting my elbow drift upwards and away from my sides, there is less lat activation, and more tension placed on the rear delts.

We know based on anatomical analyses of the lats (study), that they are strongly involved in shoulder extension when the elbows are tucked close to the sides. 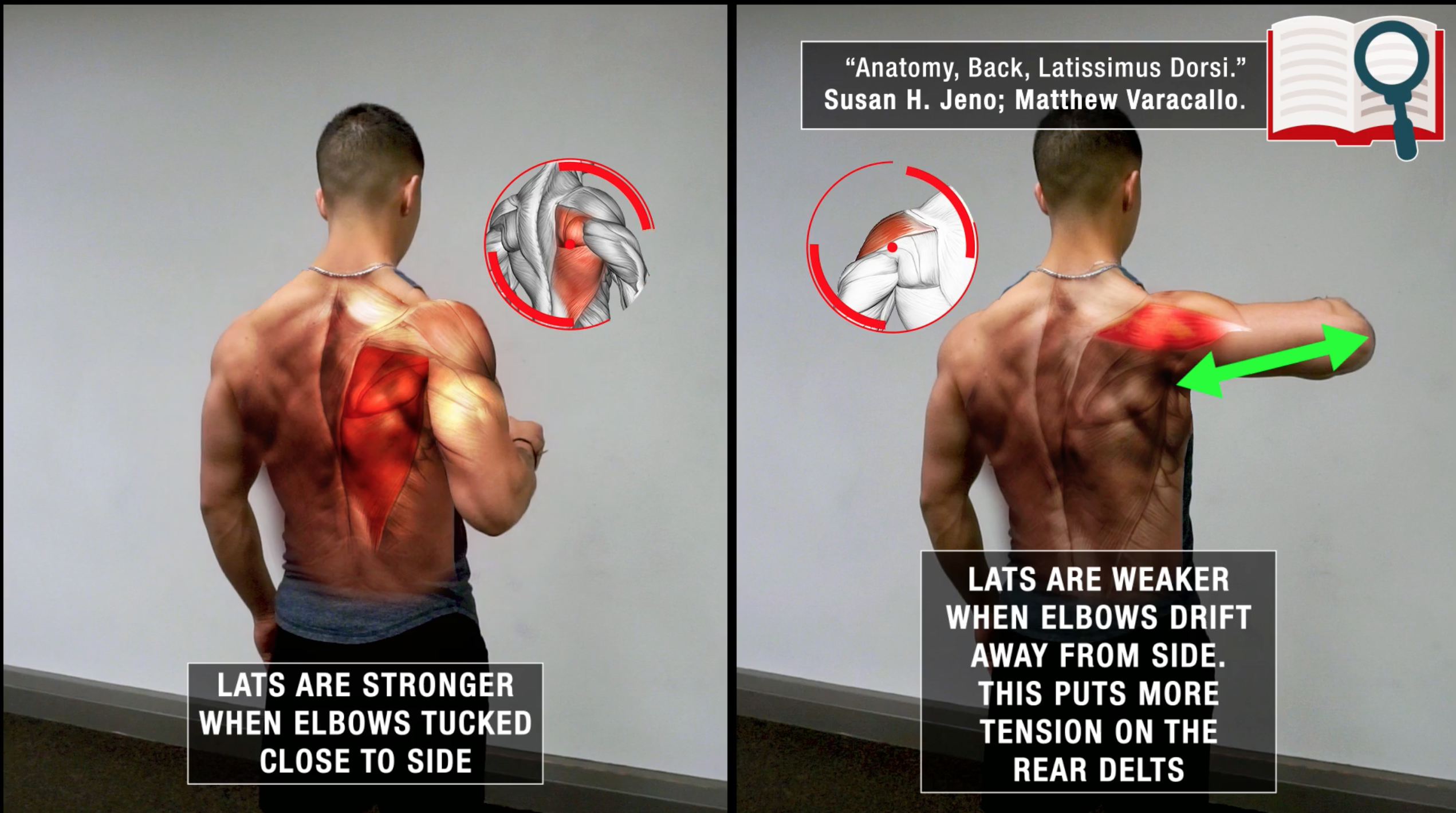 But, we also know that they become progressively weaker the elbow moves away from the sides into a more transverse extension. This is when the rear delts are highly activated, as shown in the image above. 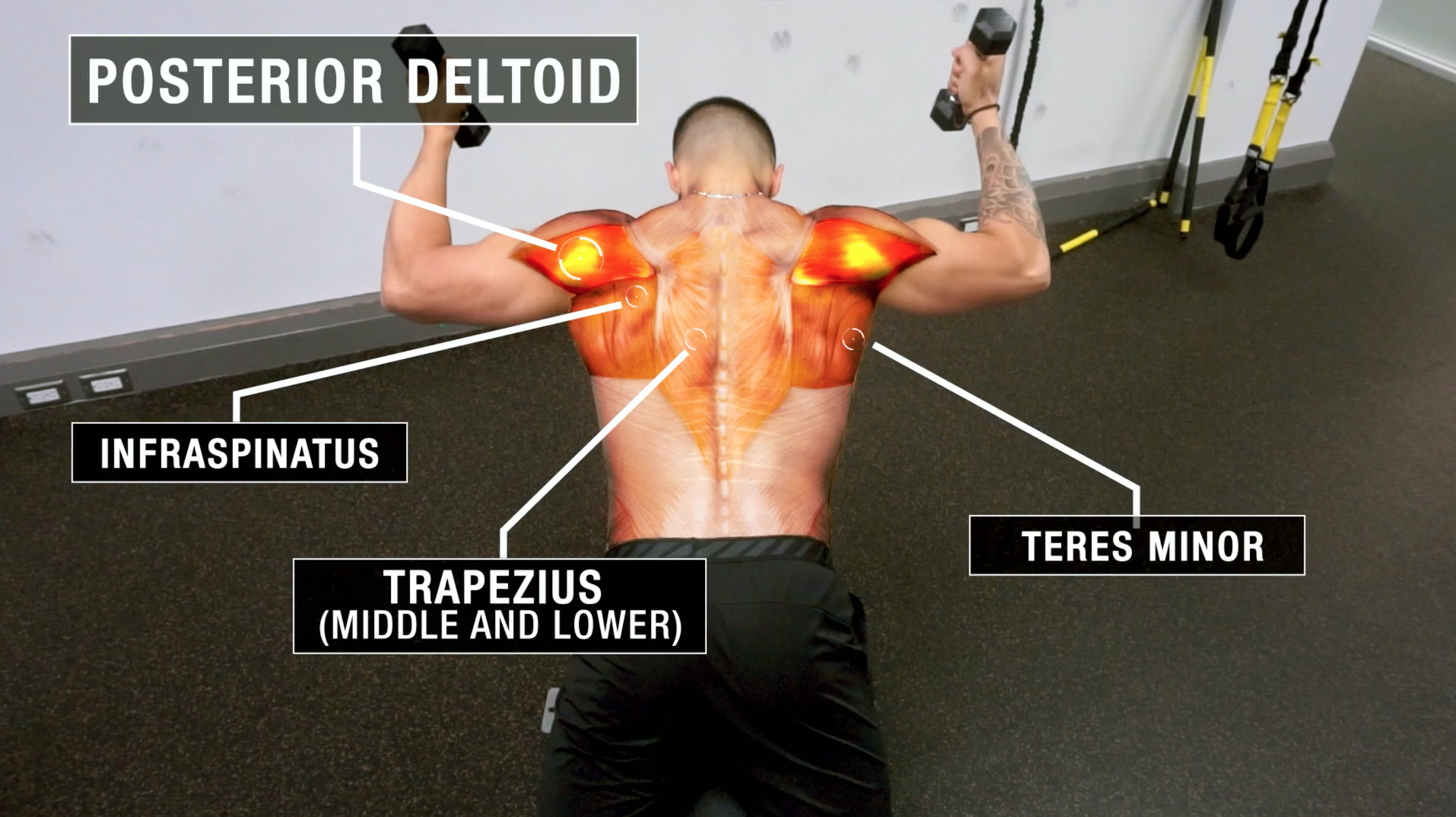 One of the best dumbbell shoulder exercises for the rear delt is a dumbbell version of the traditional rope face pull.

This rope face pull can be used to further target the rear delts, and at the same time, strengthening the all-important rotator cuff, mid and lower traps simultaneously.

To maximize the effectiveness of this exercise, you’ll want to ensure you’re performing it correctly.

I’d suggest performing these on an incline bench set at roughly 45 degrees, as this will help minimize any lower back involvement.

Grab a pair of light dumbbells and start with your arms straight down and thumbs pointing towards each other at the bottom. 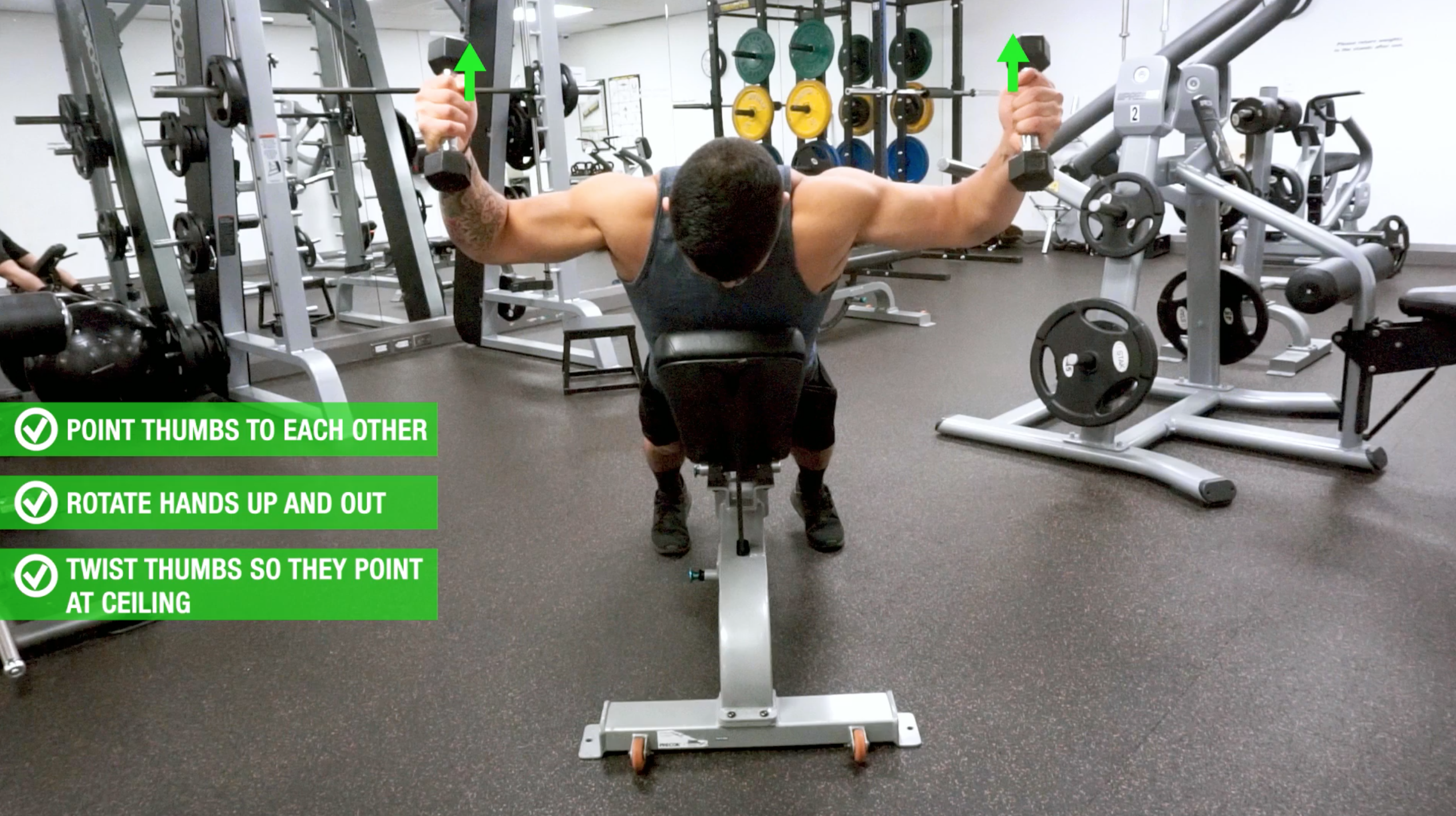 Then, as you raise your arms up, rotate your hands up and out to the side, while twisting the thumbs so they now point at the ceiling. At the top position, your arms should make the shape of a “W”.

Hold this position for a brief second while contracting the rear delts and mid and lower traps. Then, come back down for another rep.

You want to avoid making the mistake of not getting the wrists all the way back at the top position. Doing so will minimize the important external rotation component of this exercise. 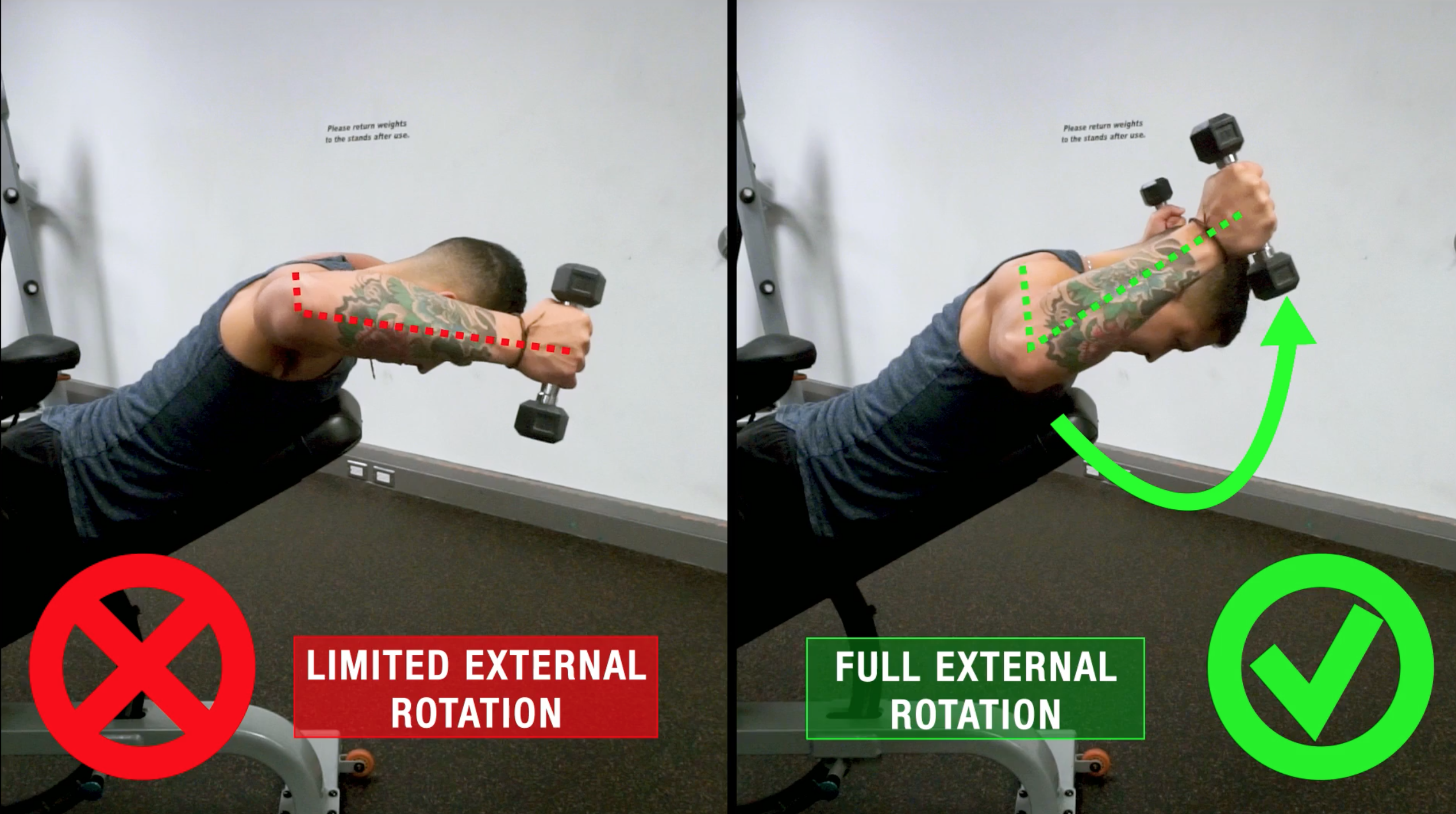 Furthermore, avoid compensating by arching the back as you raise the weight up.

Instead, maintain a straight, neutral spine throughout the movement.

I’d suggest using a relatively lightweight for this exercise and focus on a higher rep range of roughly 10-15 reps.

Here's a sample dumbbell-only shoulder workout you can do which incorporate the exercises we've just gone through:

Feel free to do this as a workout on its own. You can also split it up and add a couple of these exercises to your existing working program.

I hope that by reading this article, you now understand the importance of choosing the right exercises, but more importantly, performing them correctly.

Performing exercises correctly is just as important if you want to build muscle faster, while also avoiding injuries.
Within my Built With Science programs, you’re provided with detailed breakdowns of exercise variations and the correct form to use.

If you need a program which will help you build an incredible physique, then I recommend giving it a go.

Within the program, you’re going to learn how to incorporate small tweaks into your exercise programming which will make an enormous difference to your results.

This is why so many of my members are seeing incredible results.

I’ve created a quiz which will give you a specific individualized program recommendation based on what you’re trying to achieve. If you're serious about getting results, then I recommend taking the quiz to find out what your perfect program is:

By the way, here's the article summed up into a YouTube video:

The Best Science-Based DUMBBELL Shoulder Exercises For Mass and Symmetry 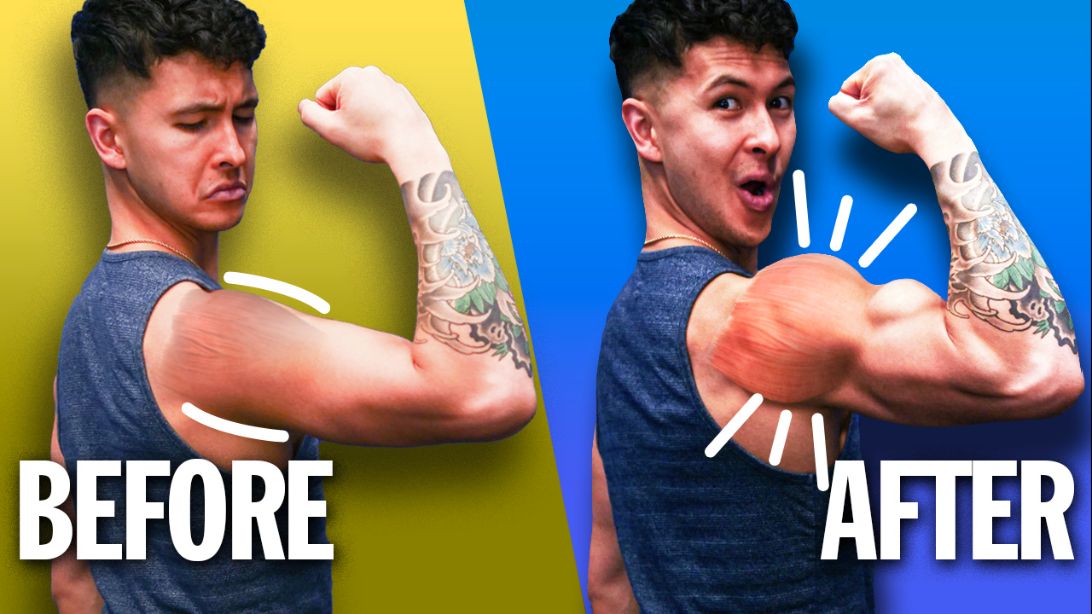 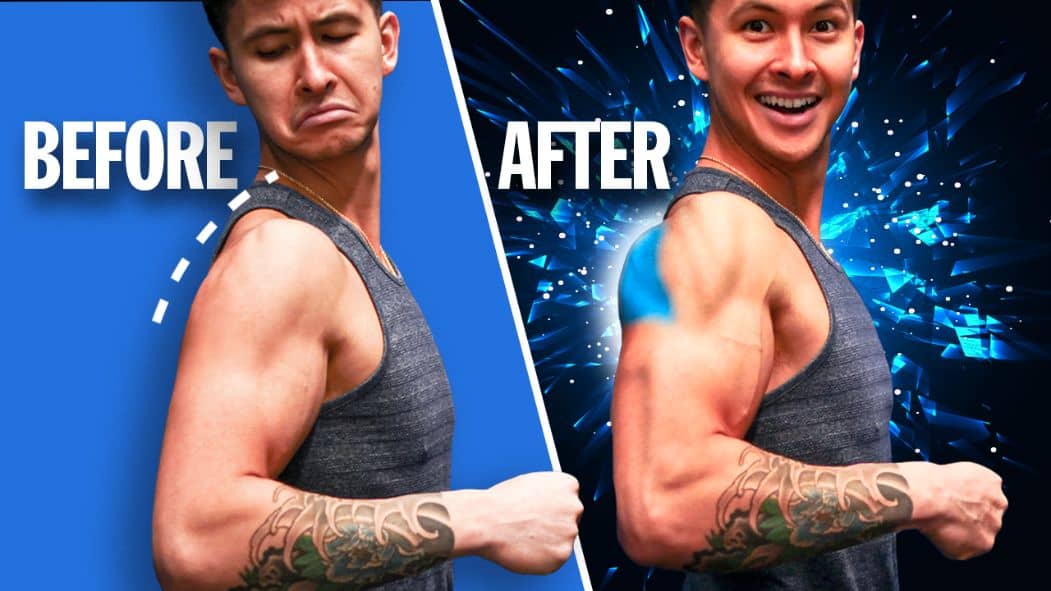