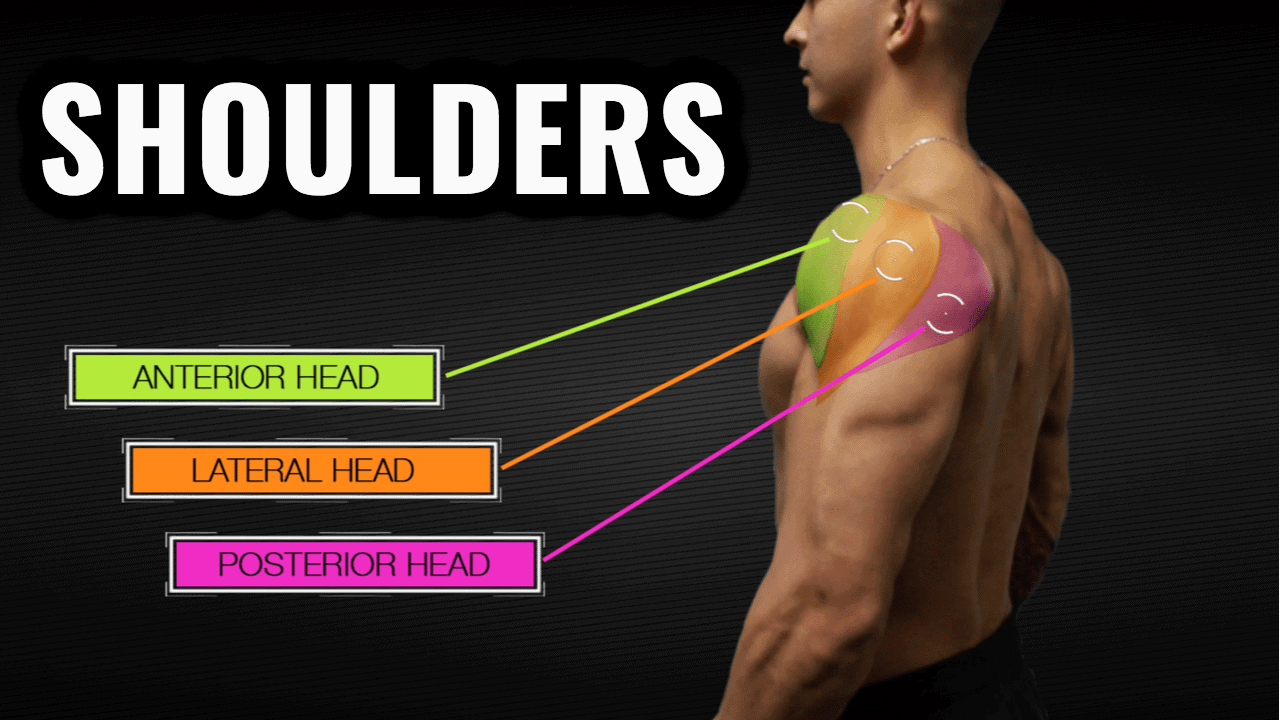 Well developed shoulders are key to completing a balanced physique and getting that broad-shouldered look everyone is striving for. However, many people neglect to focus on all three heads of the deltoid muscle. And that is a huge mistake.

Proper development of all three portions of your shoulder is what gives them that 3-dimensional look. Which is why neglecting all three heads is detrimental.

Don't believe me? Here are some recent shots of my personal development: 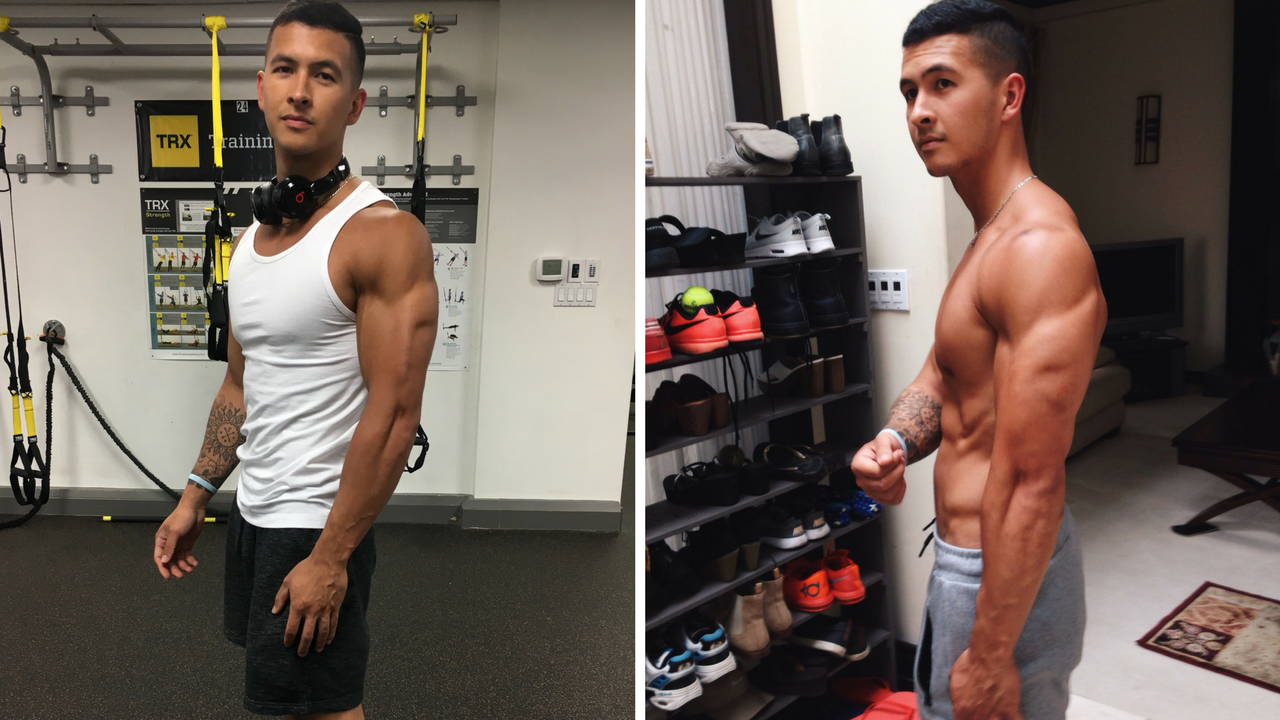 As you can see, it's the balanced development of the anterior, lateral, and posterior deltoid that gives my shoulder that full look.

By the way: every BWS program is designed to help you transform your physique in the most balanced, yet time-efficient manner - so you never have to worry about lagging muscle group development. And best of all? It's all rooted in science. For more information on how BWS programs can help you look better - FAST:

To better understand this, let’s take a look at their anatomy. 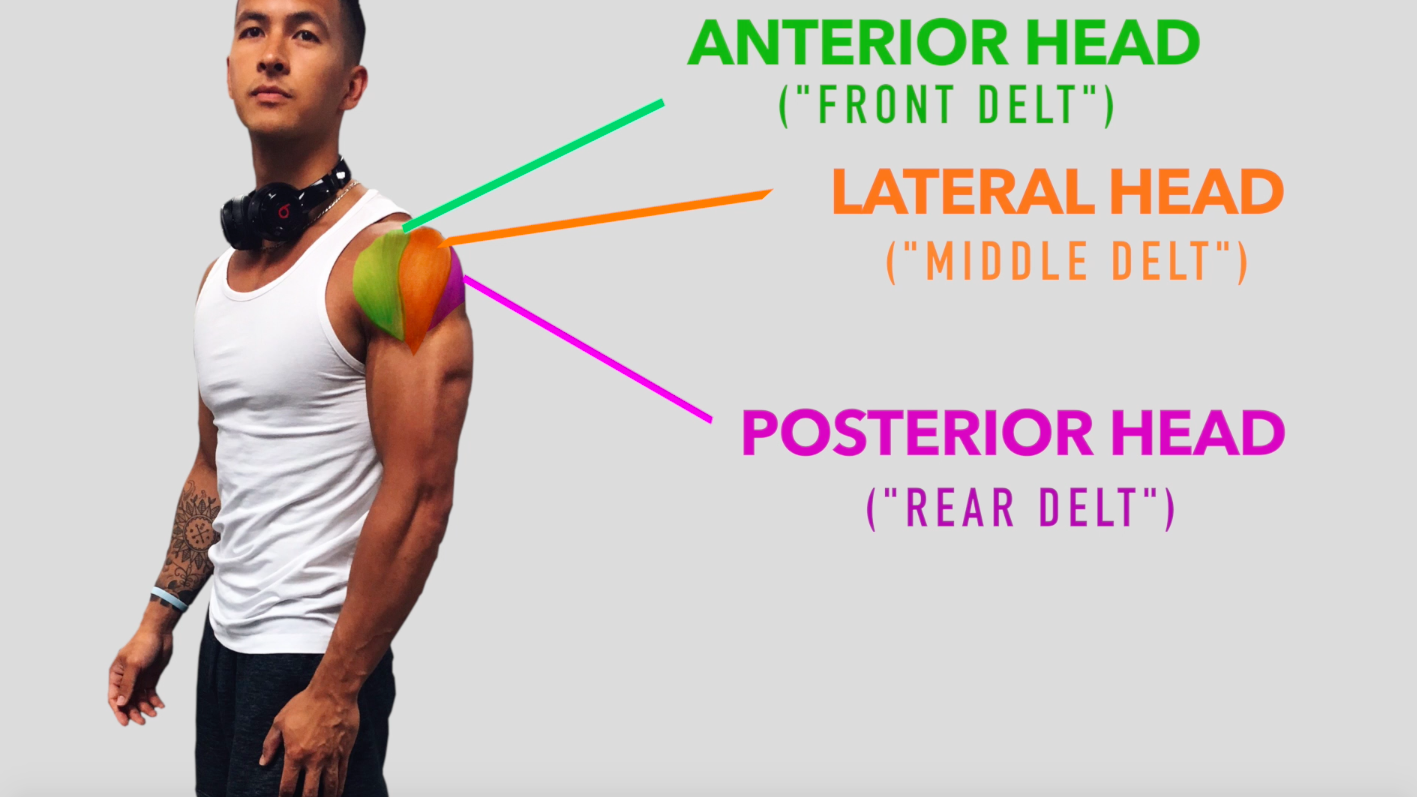 Similar to the 3 tricep heads, the deltoid muscle is divided into 3 main parts. The anterior, lateral, and posterior heads. Also commonly referred to as the front, middle, and rear delt.

Note that all 3 heads will be activated to an extent during all shoulder exercises. But as made evident in the literature, each head can be emphasized through the use of specific exercises and the way you perform them.
So in this article, I’m going to show you a shoulder workout optimized based on:

But before we do so, let me briefly talk about the front delts.

As I previously mentioned it's important to consider all 3 heads of the shoulders. But keep in mind that the front delt already gets sufficient indirect work through several pressing movements.

This is because the anterior deltoid is already very active in exercises like the bench press.

Also, as shown in these two studies by Trebs and Lauver, its involvement in pressing movements increases significantly as the level of incline increases.

So, you’re likely already performing a lot of flat and incline pressing movements that involve the anterior deltoid. Therefore, it’s better for you to focus more on the development of the lateral and posterior heads. These are the two groups that are commonly neglected in a routine. 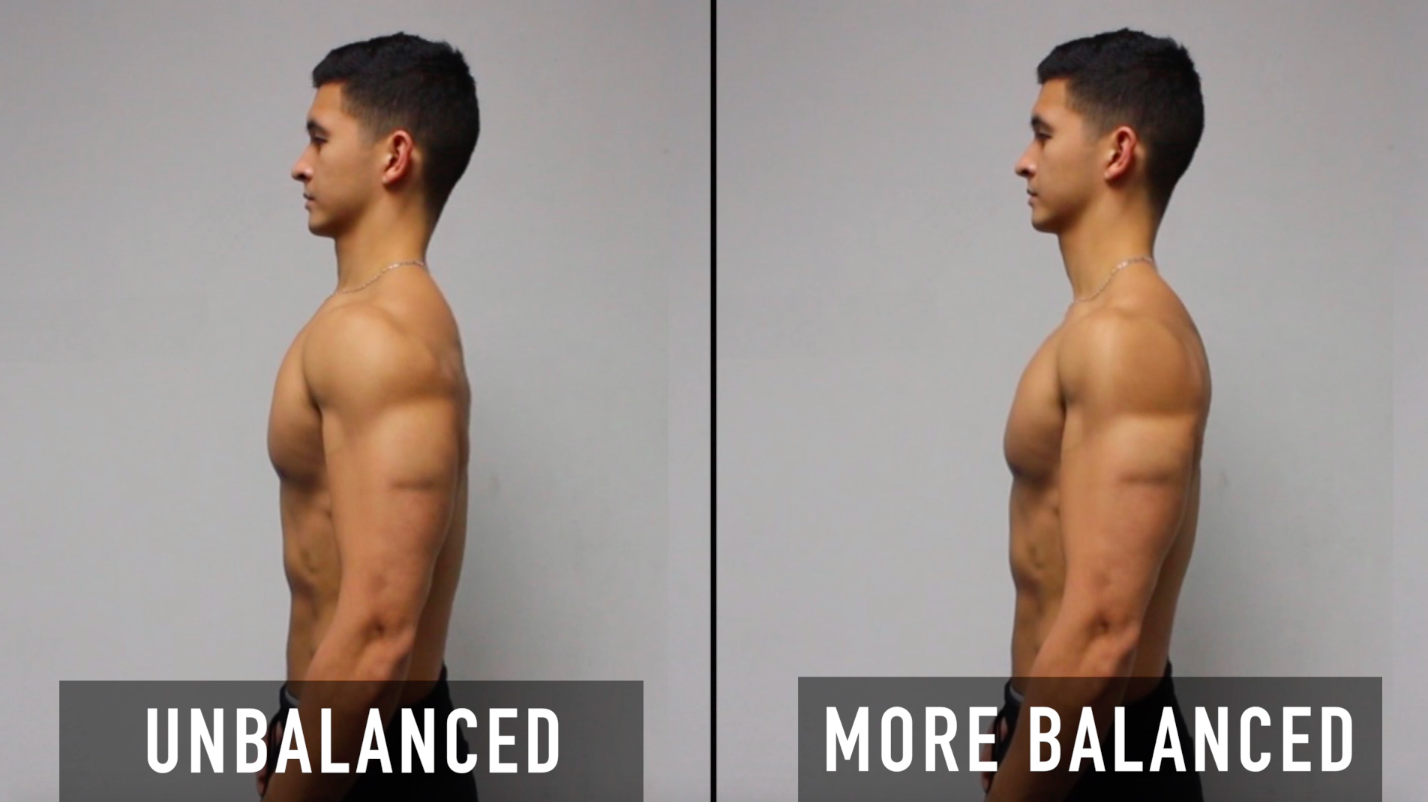 This not only helps balance your shoulder aesthetically, but as shown in this study by the journal of clinical biomechanics, "strengthening the posterior head of the deltoid is desirous for ensuring shoulder joint integrity and reducing injury potential."

Thus, in this routine, we’re going to put more emphasis on the lateral and posterior heads of the shoulder.

Also, keep in mind that the four rotator cuffs are important muscles that shouldn’t be neglected. Why? Because they help stabilize the shoulder. But I’ll make a separate post for them.

The overhead press is an essential compound movement when it comes to shoulder training. This is due to the ability to easily overload it with weight and target all deltoid heads. There are several variations of this exercise which I will discuss. But note that they all mainly target the anterior deltoid with some involvement of the lateral and posterior heads. 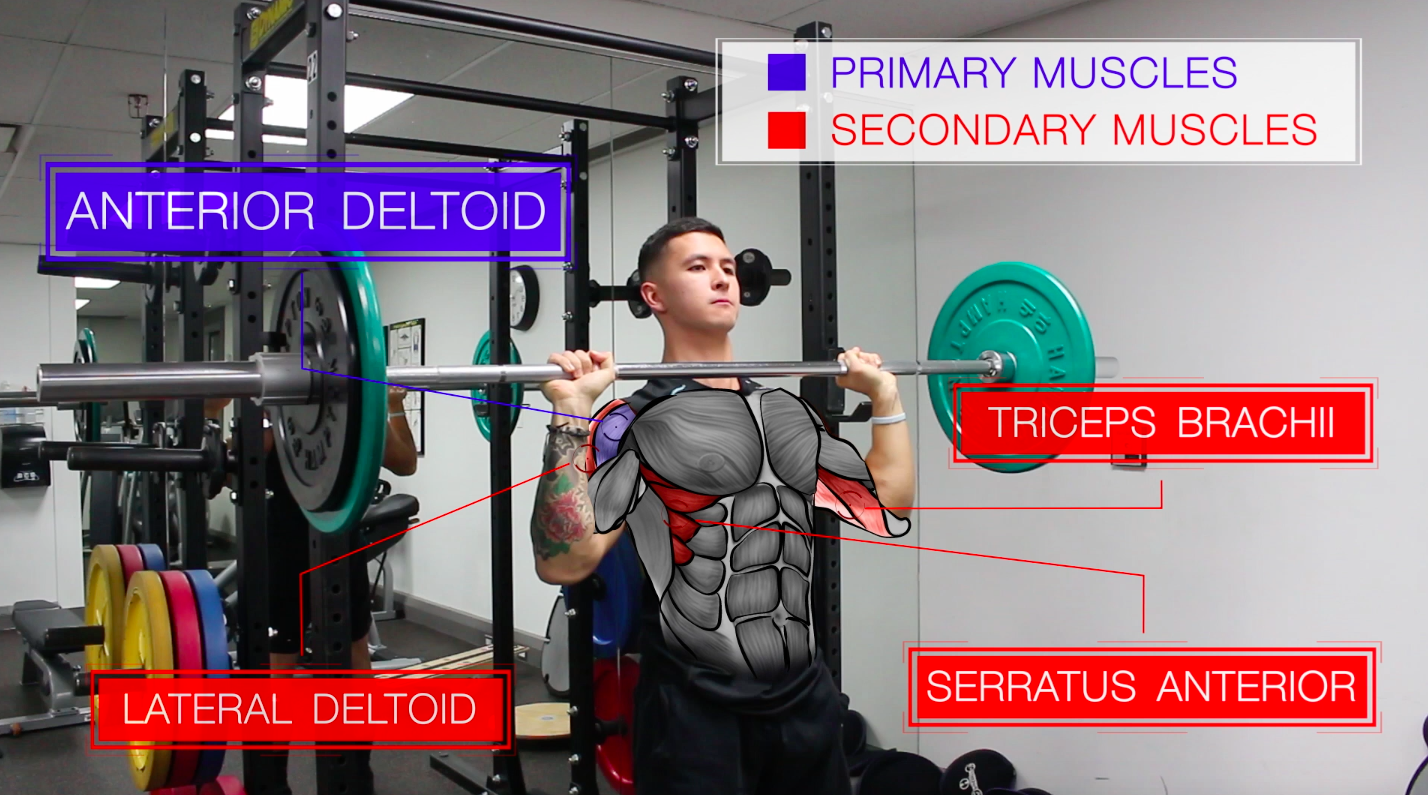 In addition, the standing overhead press will also put more emphasis on the core musculature and serratus anterior muscle.

The Benefits Of The Overhead Press

This exercise has been shown in studies like this one by Behren & Buskies to be the best exercise for the anterior deltoid. 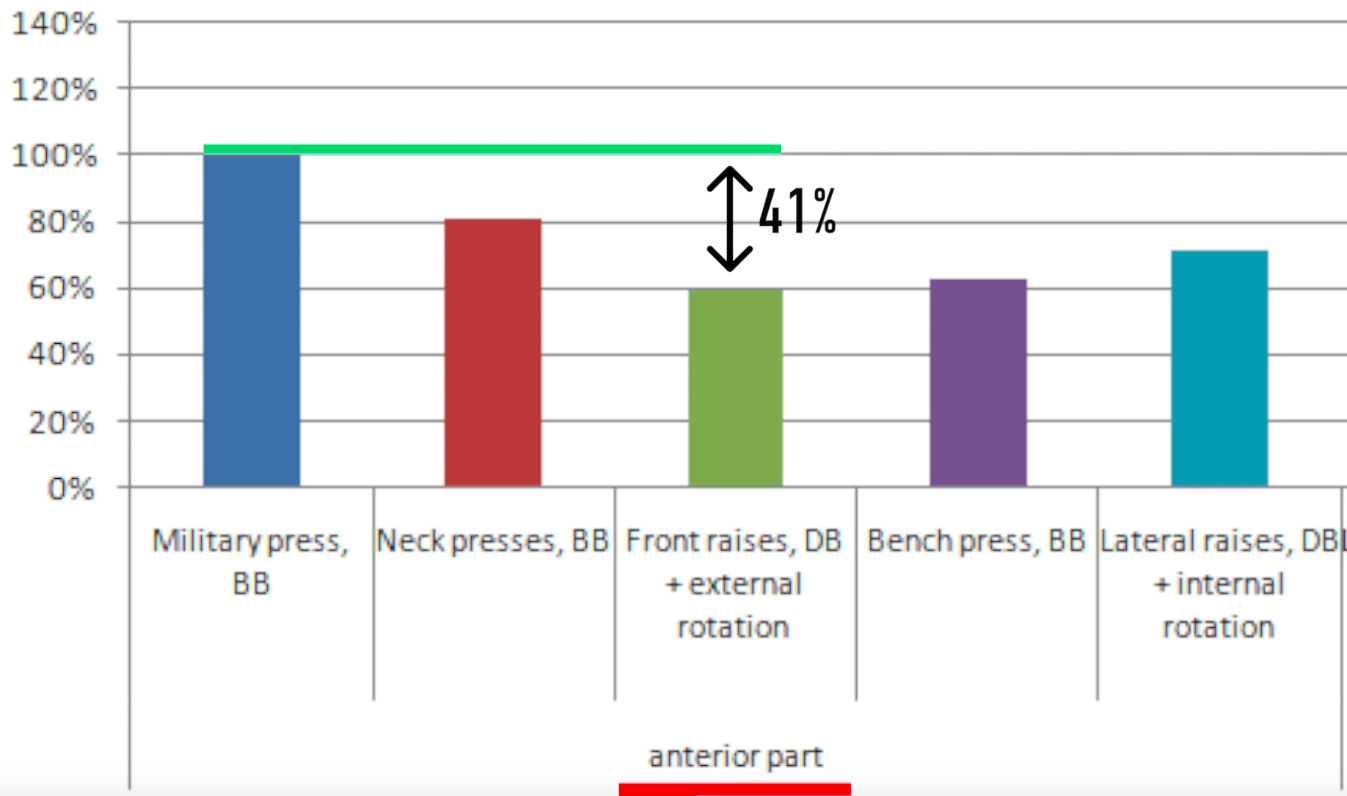 In fact, it was even shown to outperform dumbbell front raises by 41%. Thus I’d argue it’s the only exercise you need to include in your regimen that emphasizes the front delt.

Now as for which variation is most effective, you basically have four options: 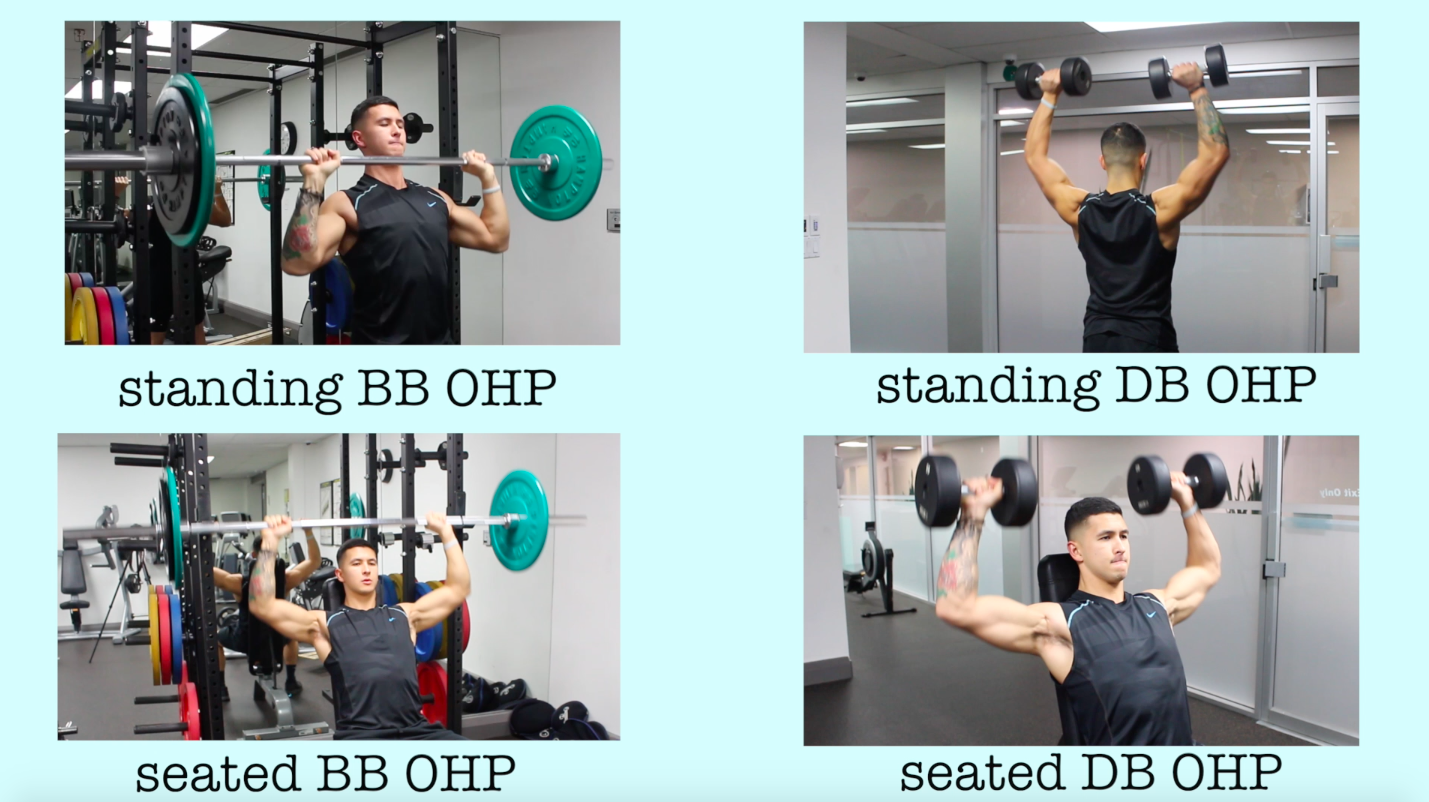 This study from the journal of strength and conditioning research compared the 4 variations. It found that compared to any of the other conditions, the standing dumbbell press elicited higher:

Opt For The Barbell Overhead Press

So it may seem that research suggests this variation is the best. But I think that it’s a difficult exercise to overload. This is especially once you get to very heavy weights.

For this reason, I’d opt for the barbell overhead press instead. It wasn’t very far behind the standing dumbbell press in terms of overall shoulder activation. And it also outperformed the seated variations. Therefore, it's a viable alternative.

Nonetheless, the other variations are still effective exercises. You can cycle through the variations in your program as needed.

For example, if you plateau on the standing overhead press, feel free to switch over to the seated dumbbell press. You can also make this switch if you get bored of performing one exercise for several months. Regardless, I'd suggest sticking to one variation for an extended period of time before considering a swap.

This next exercise is commonly performed in the gym. It's also one I highly recommend for lateral shoulder development. It’s going to target mainly the lateral deltoid with moderate involvement of the other two heads and the upper traps. 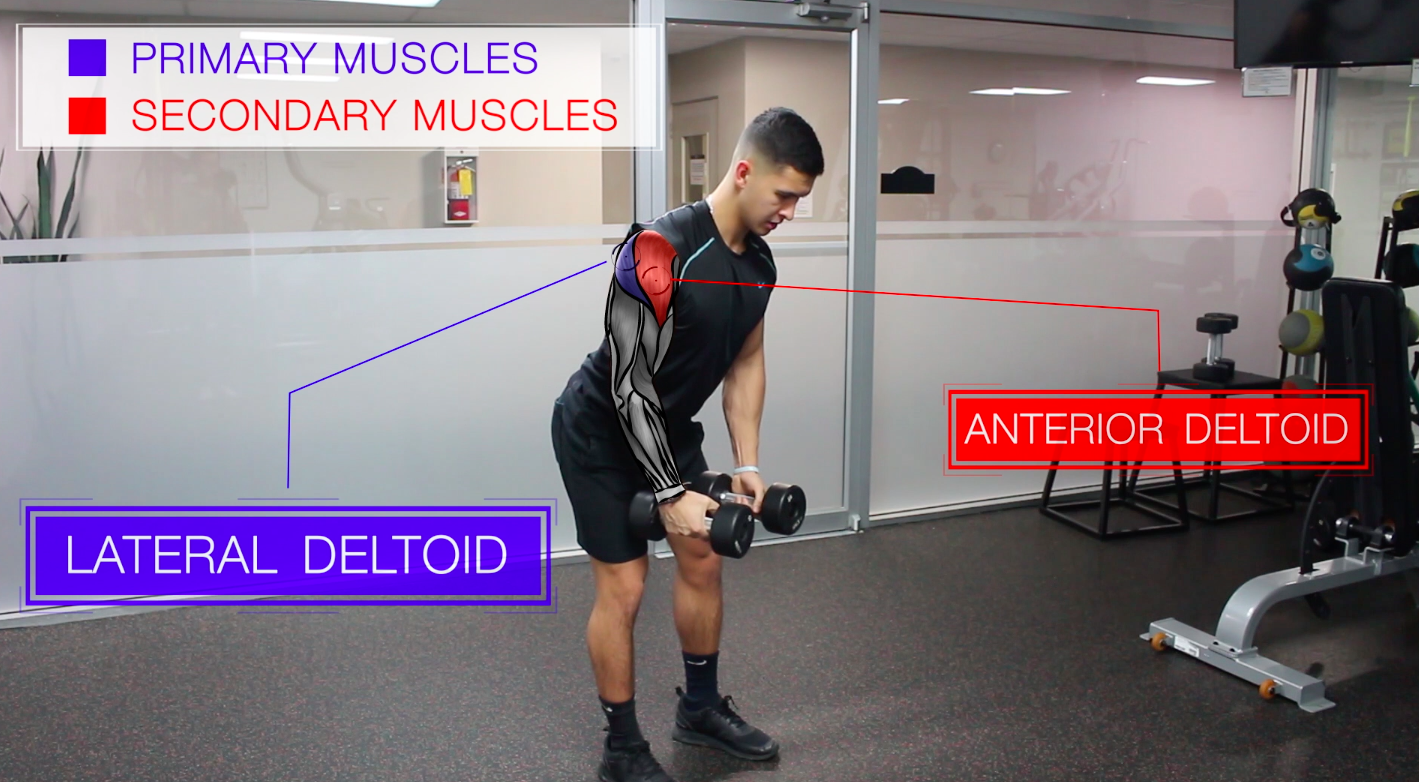 This exercise was shown in this study by Behren & Buskies to elicit the highest activation of the mid delt when compared to other common shoulder exercises.

However, given that this exercise is so popular, I want to go into more depth regarding proper form. And crucially, how to maximize shoulder activation while minimizing stress at the shoulder joint.

How To Perform Lateral Raises Properly

When you lift the weight to your side, the activation of each portion of the delt depends on the extent to which it’s in a direct line of the force opposing gravity.

So without any shoulder rotation, you can see that the lateral deltoid, as well as the anterior deltoid, are in a direct line of the force opposing gravity. Meaning they will both be sufficiently activated. 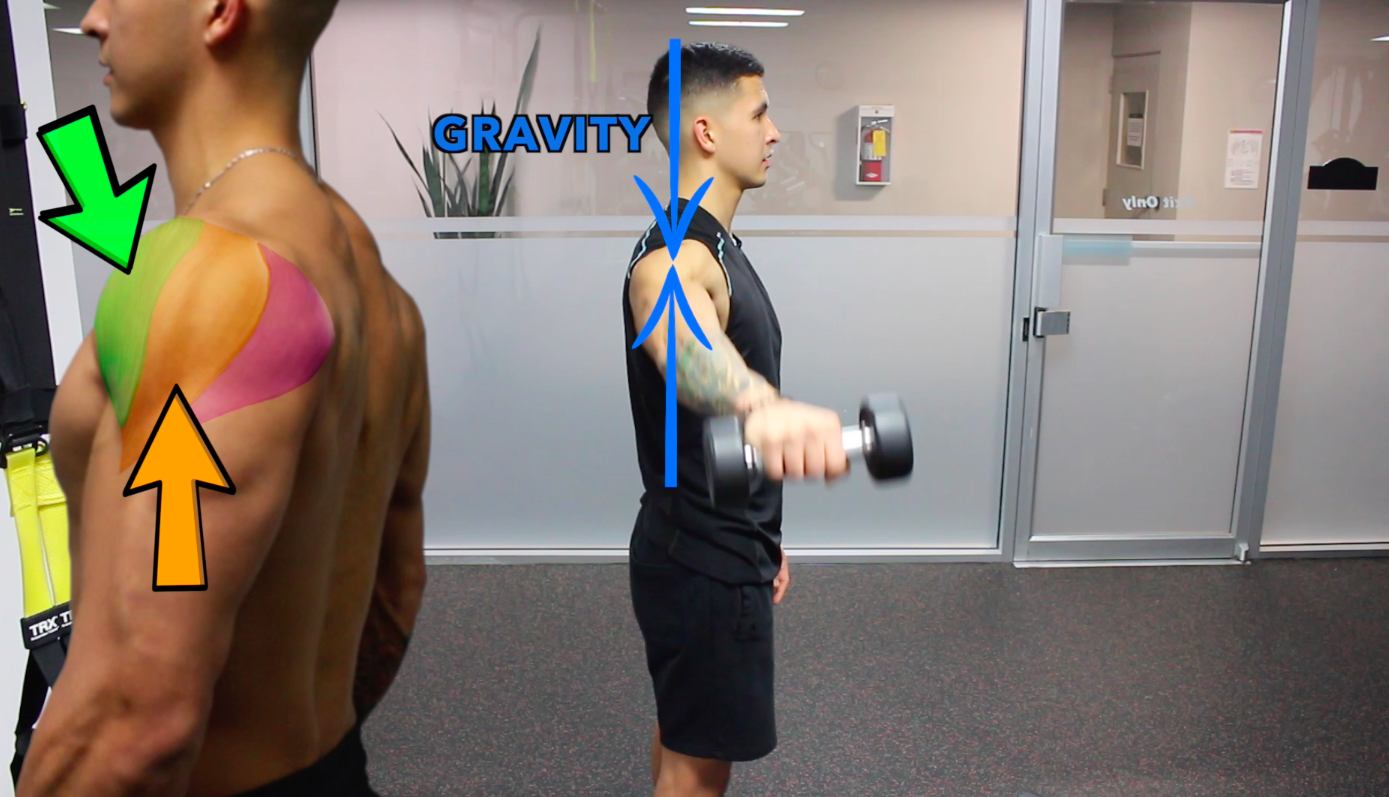 To internally rotate your shoulder, think about as if you were pouring water from a pitcher. This then takes the anterior deltoid out of the equation. And makes the lateral deltoid in the most direct line of force which is the one we want to target. 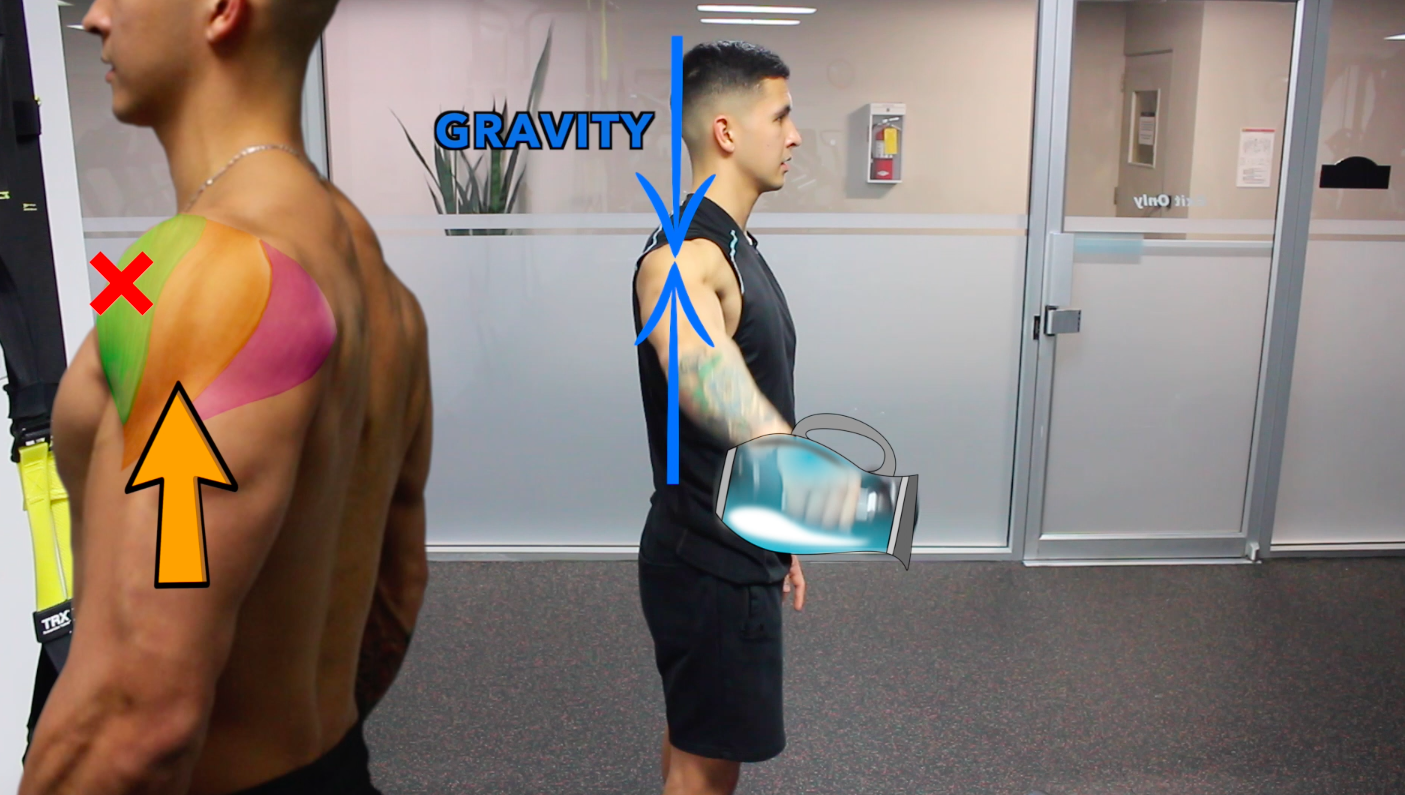 However, this is a dangerous position for the glenohumeral joint to be in. This will lead to wear and tear and shoulder impingement in the long run (which can take months or even several years to happen).

To fix this, what you want to do is externally rotate your shoulder when performing this exercise. 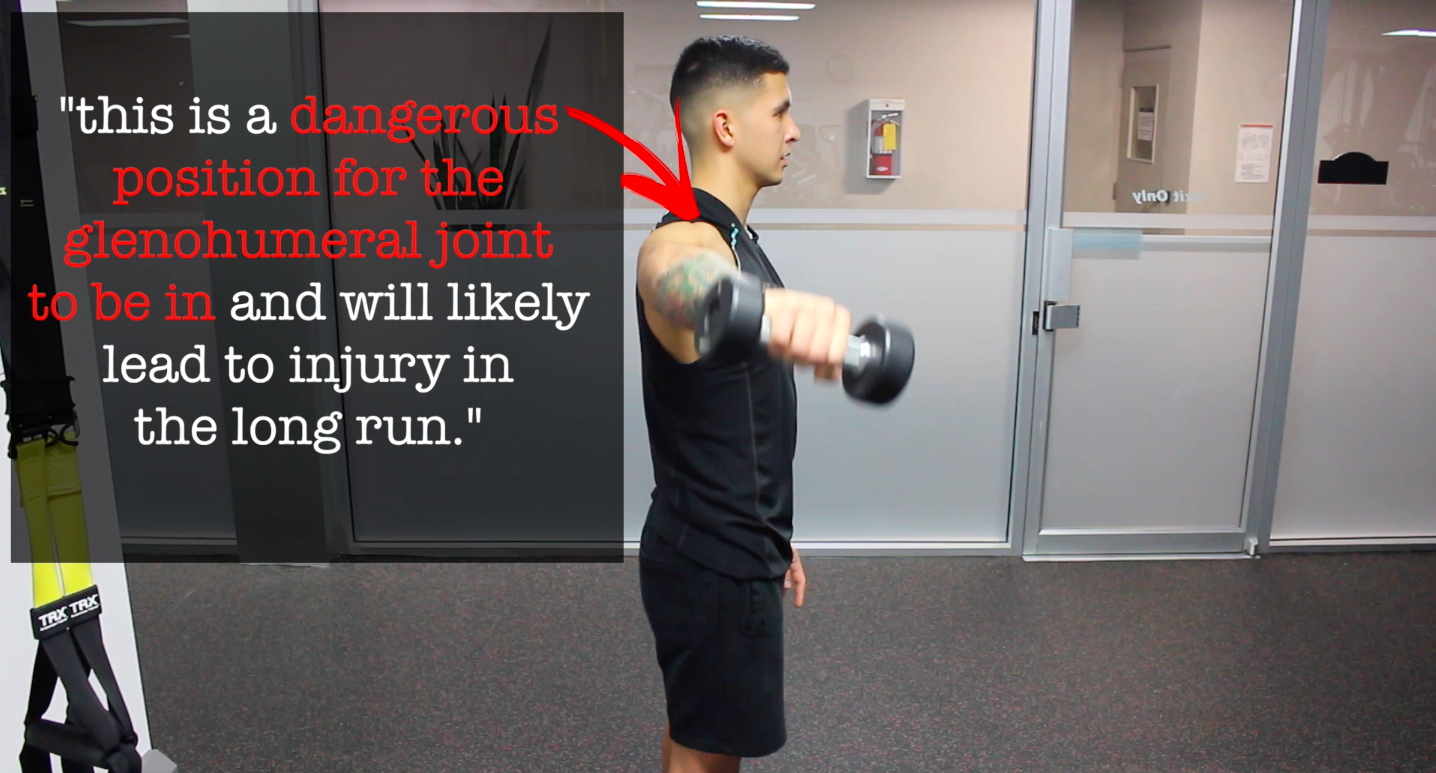 But you may notice the muscle in the direct line of force now is the front delt. So to address this and put more emphasis on the mid delt, you can do one of two options.

Option 1: Slightly lean forward so that the lateral deltoid is now more in the line of force. 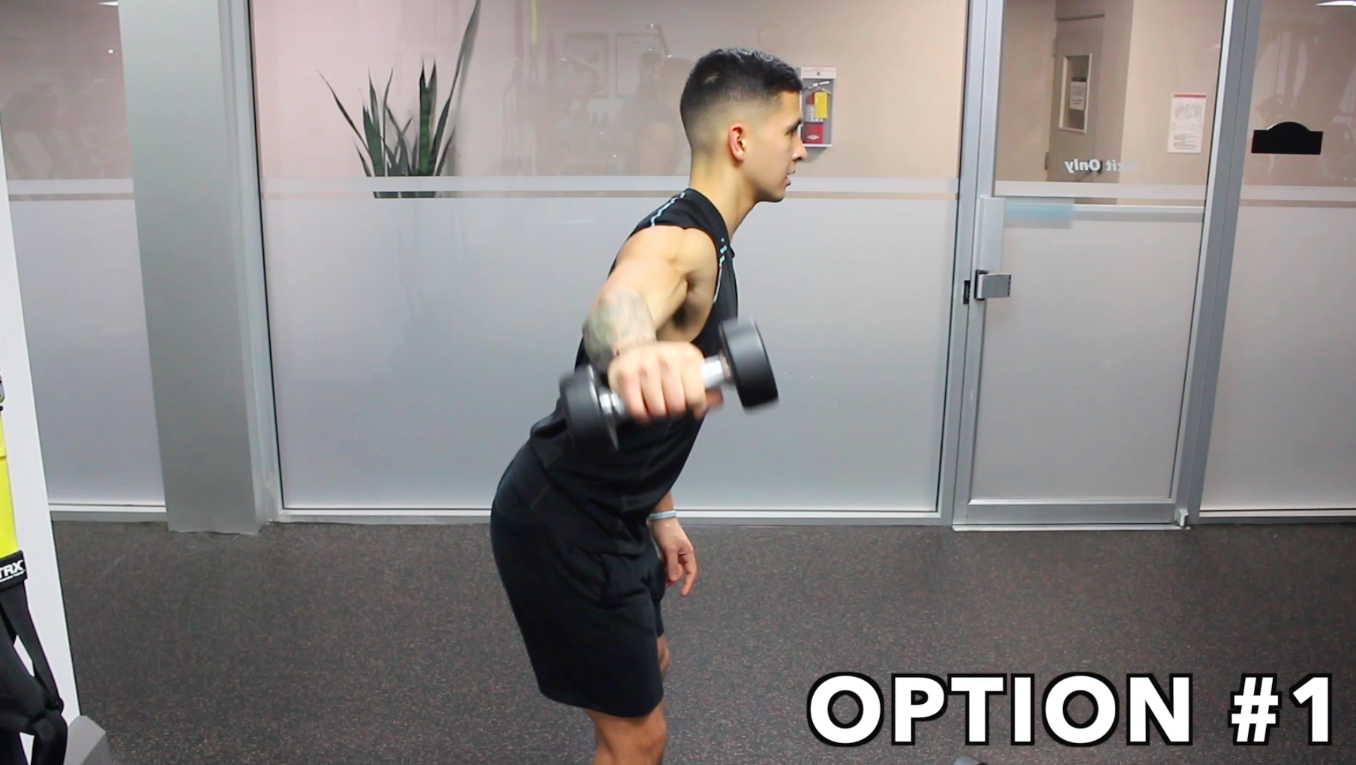 Option 2: Perform the exercise on an incline bench which is the same idea. 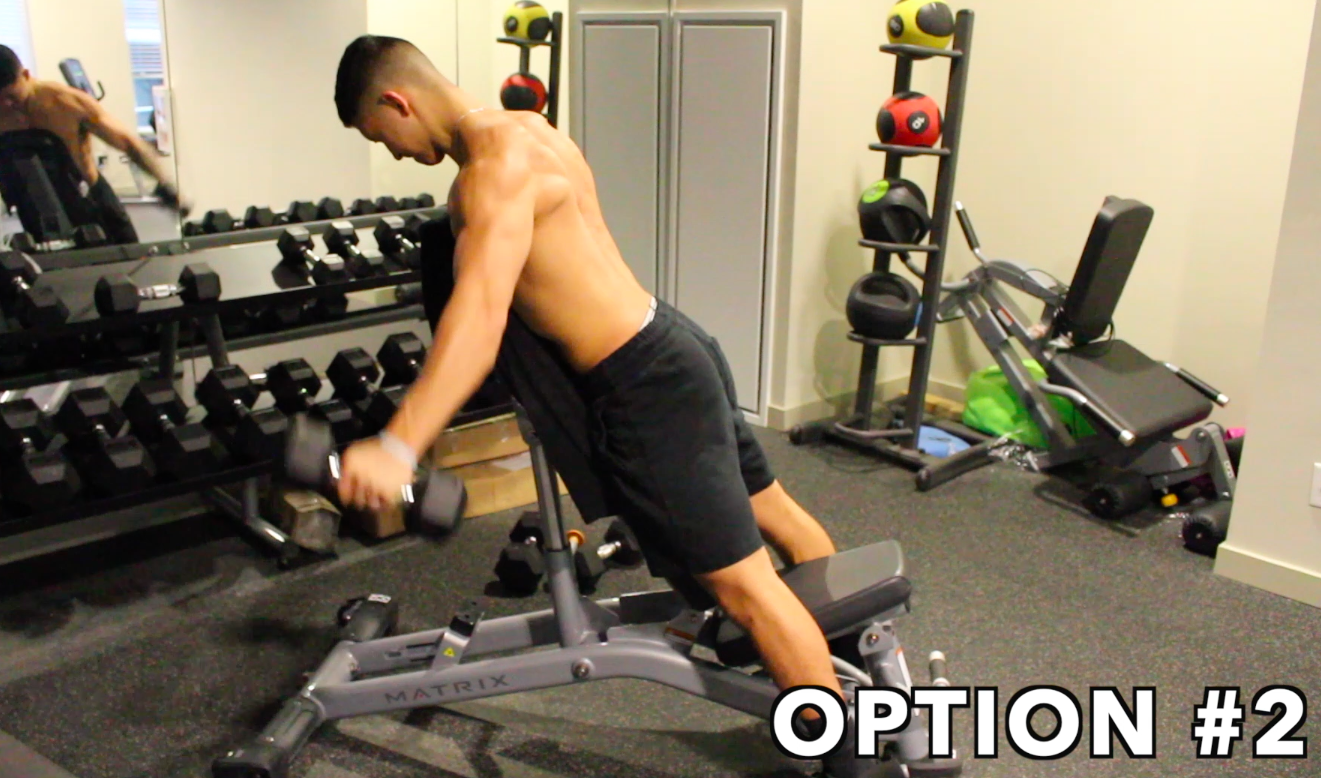 But in both cases, you want to ensure that you’re slightly externally rotating the shoulder.

Knowing how to tweak/replace exercises so you train in the safest manner possible is pretty complicated. Thankfully, though, the team here at BWS has the necessary expertise to do just that. Our 3-on-1 coaching program takes the guesswork out of training, nutrition, and even mobility work - so you can focus on what matters: making gains. If you're interested:

Now we are going to put more emphasis on the rear delts. As I mentioned earlier, their development is essential for balanced development of the shoulder and long term health. This exercise is going to mainly emphasize the posterior deltoid but will involve various other secondary muscles. 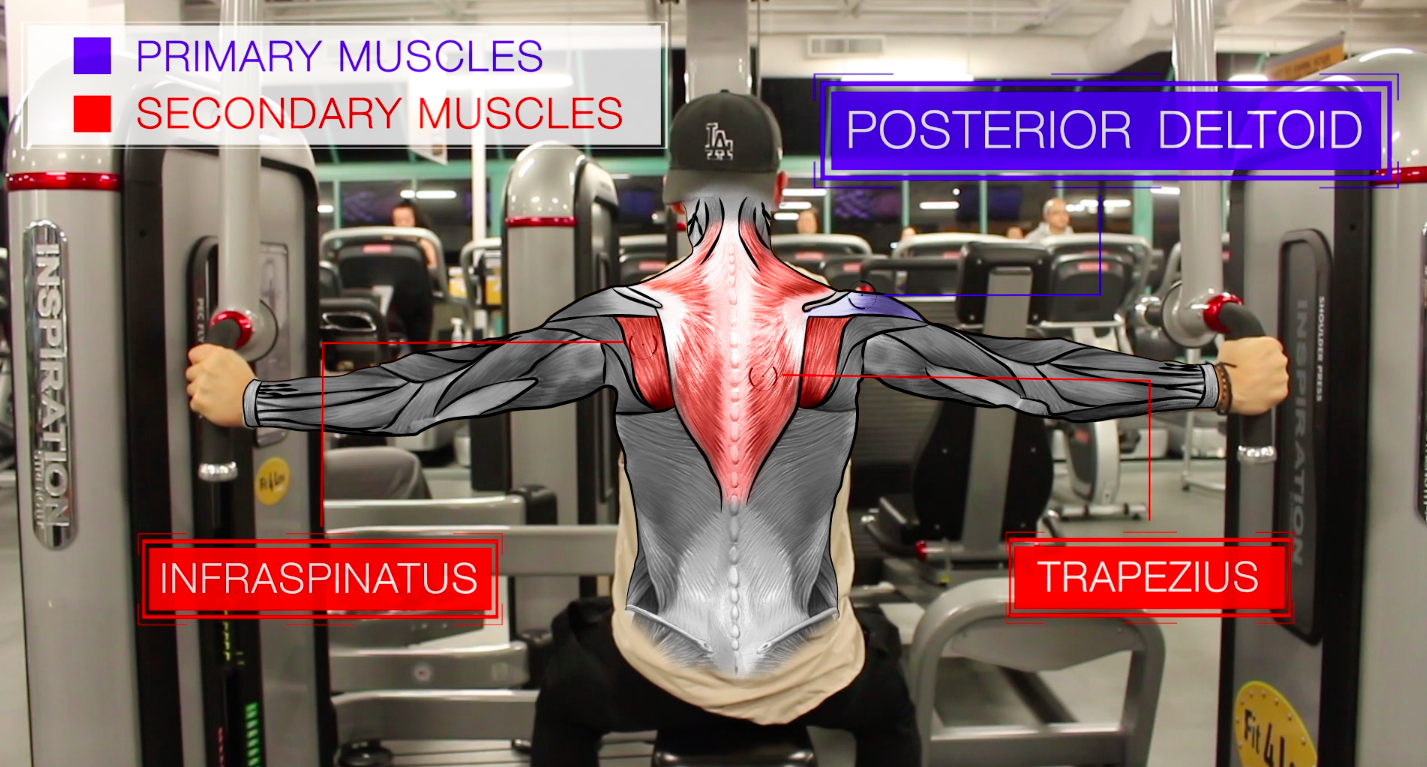 Studies like this one by Pinto and colleagues have shown that the reverse pec deck elicits higher rear delt activation than the seated row and lat pulldown. Meaning that including them in your routine is essential for optimal rear delt development.

But - which handle to use on the machine? This study from the Journal of Strength and Conditioning research showed that the neutral grip, where the palms face each other, elicited higher posterior delt and infraspinatus activation than the pronated grip where the shoulders are internally rotated and the palms face down. This indicates that the neutral grip might be the better option.

Why is this the case? Well, aside from horizontal abduction, the posterior deltoid also functions to externally rotate the shoulder. Since the neutral grip involves more external rotation than the pronated grip, it makes sense that it elicits higher rear delt activation.

The researchers also proposed that the pronated grip position places a considerable stretch on the posterior deltoid. Thus, this position may prevent it from developing adequate force due to the length tension relationship. But, this hypothesis requires further study. 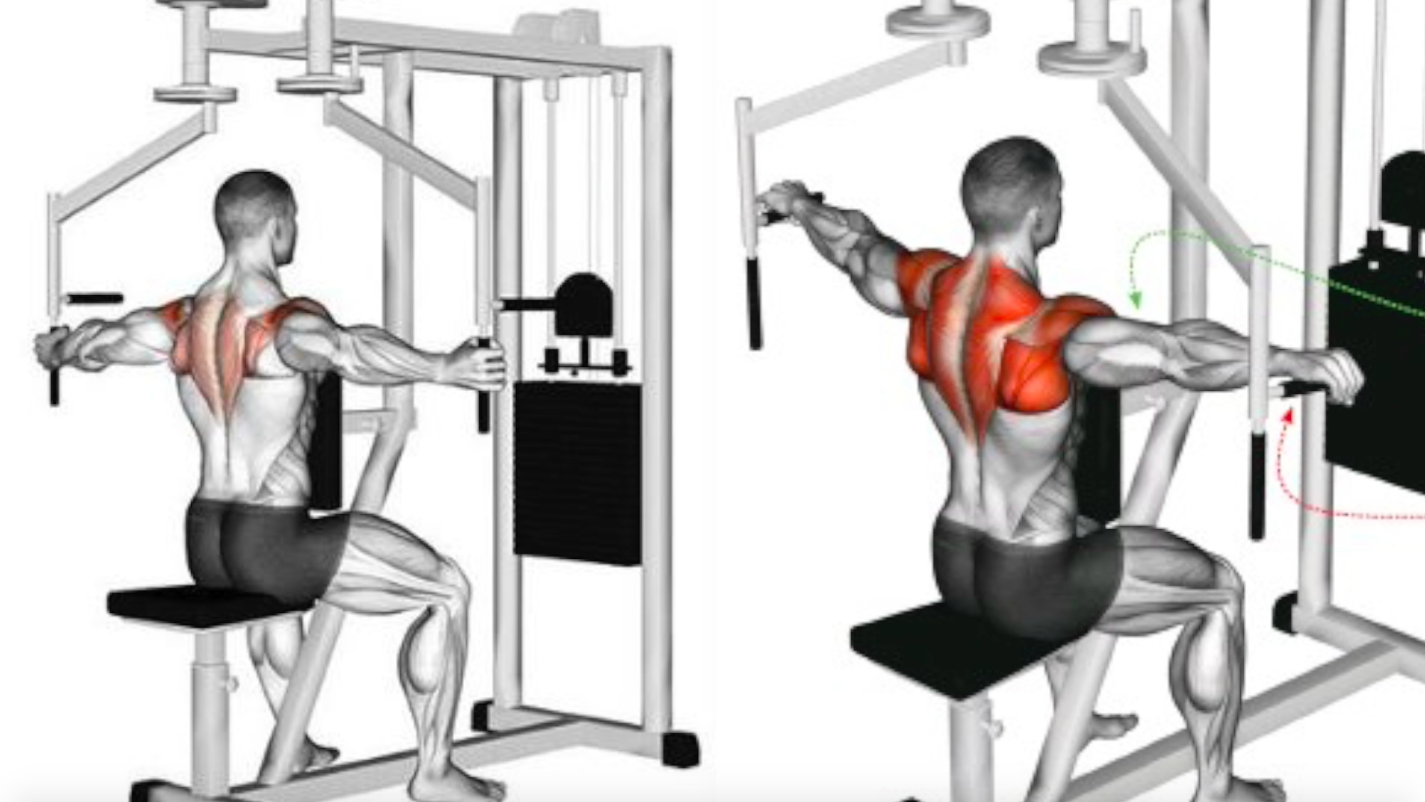 However, it’s important to note that there was a lot of variation in this study. Some subjects found the other grip more effective, so try out both and see which feels better for you!

This exercise is my personal favorite when it comes to really isolating the rear delts. And is something I highly recommend you try out. Although this variation will target similar muscles as the traditional standing face pulls will, it will lessen the involvement of the traps (more specifically the upper traps). 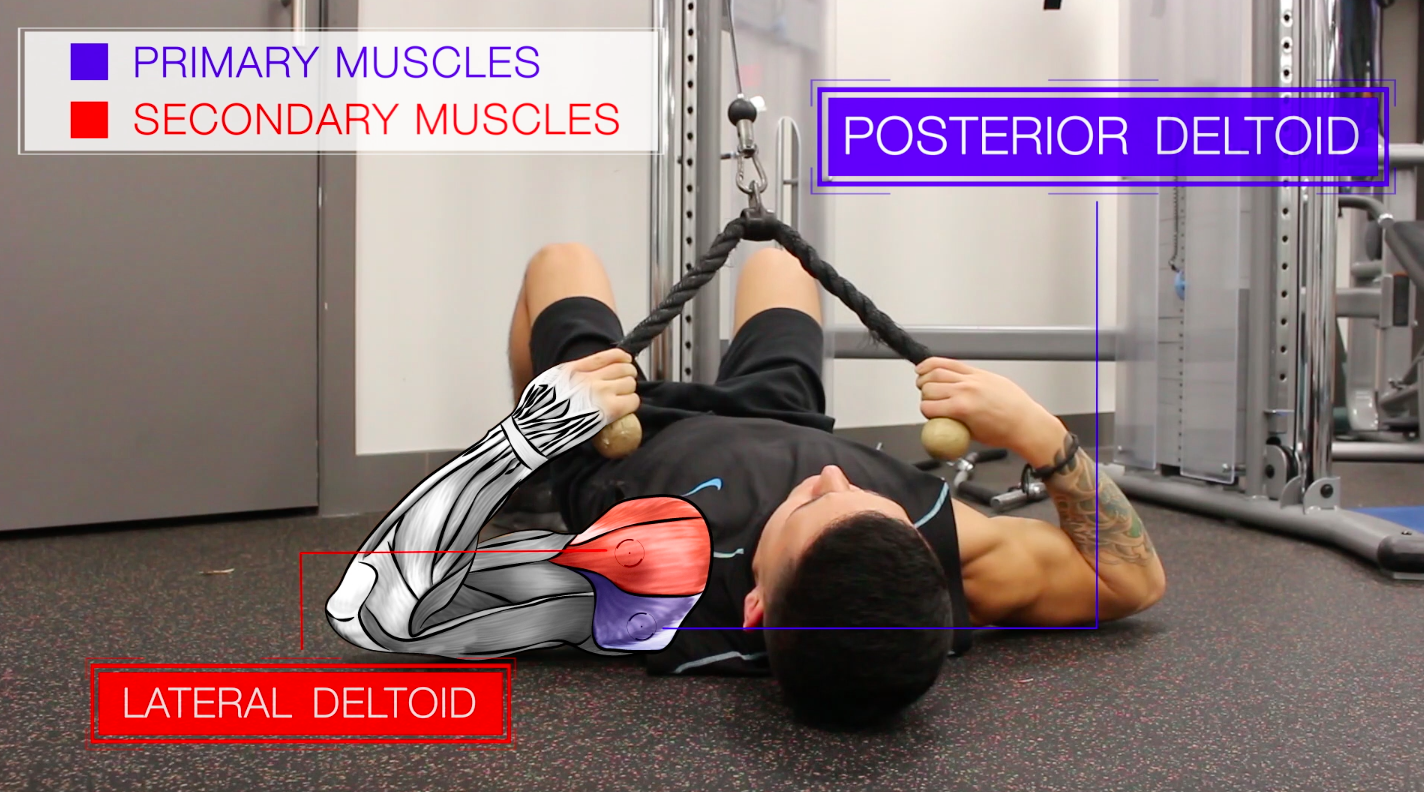 This is because, as shown in this study from the Journal of Sports Medicine, the upper traps are more active during standing exercises since they work as a postural muscle.

Thus, laying on the ground:

However, keep in mind that the traditional face pulls still have their benefits. They can help strengthen the rotator cuffs and postural muscles. So I’d strongly advise that you still incorporate them somewhere in your routine or do a few sets of each variation.

As for fiber type, the shoulders have been shown in numerous studies to be pretty much an even 50/50 split between type I and type II muscle fibers.

A common belief is that:

Some studies agree with this. However, others show that both fiber types will grow regardless of the rep range used.

But I think that research is still leaning towards including a varied rep range given their fiber type distribution. Thus, I think that both high reps and low reps in your workout would be the best option in terms of hypertrophy.

So to wrap this all up, here’s a sample workout you can do using the exercises previously discussed. Feel free to swap or add exercises or split the workout in half if you’re training shoulders more than once a week. 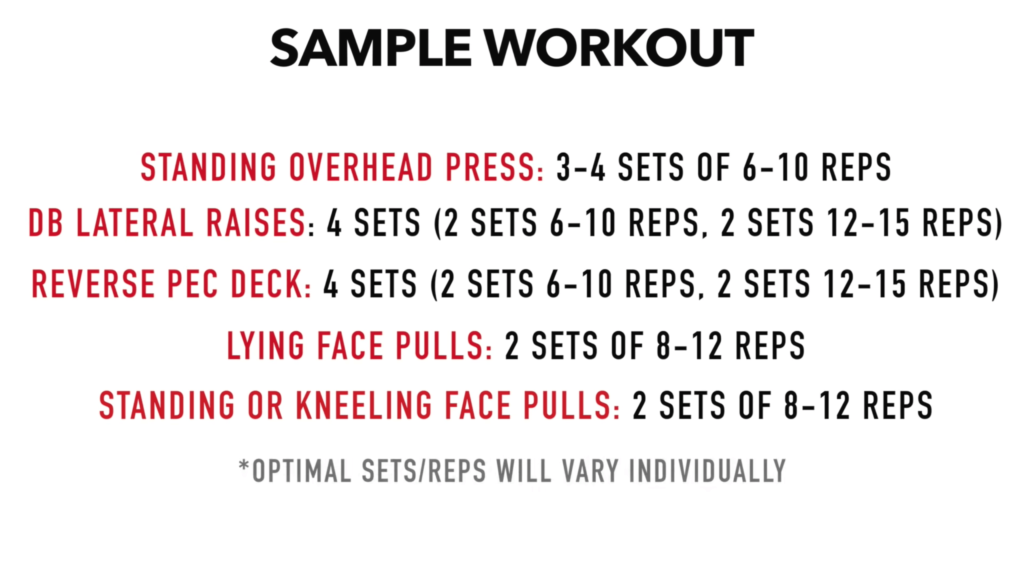 Also, here's a full 7 page PDF of the shoulder workout which you can download for free. It includes a progression scheme, exercise pictures and tips, and exercise alternatives. As well as other information you'll find useful. Let me know if you find it useful and feel free to let me know if you have any questions regarding anything I’ve written:

Get The Shoulder Workout Here!

And for a step-by-step program designed to accommodate your schedule and show you exactly how to build muscle most effectively through the use of science, then:

The Best Science-Based Shoulder Workout for Size and Symmetry 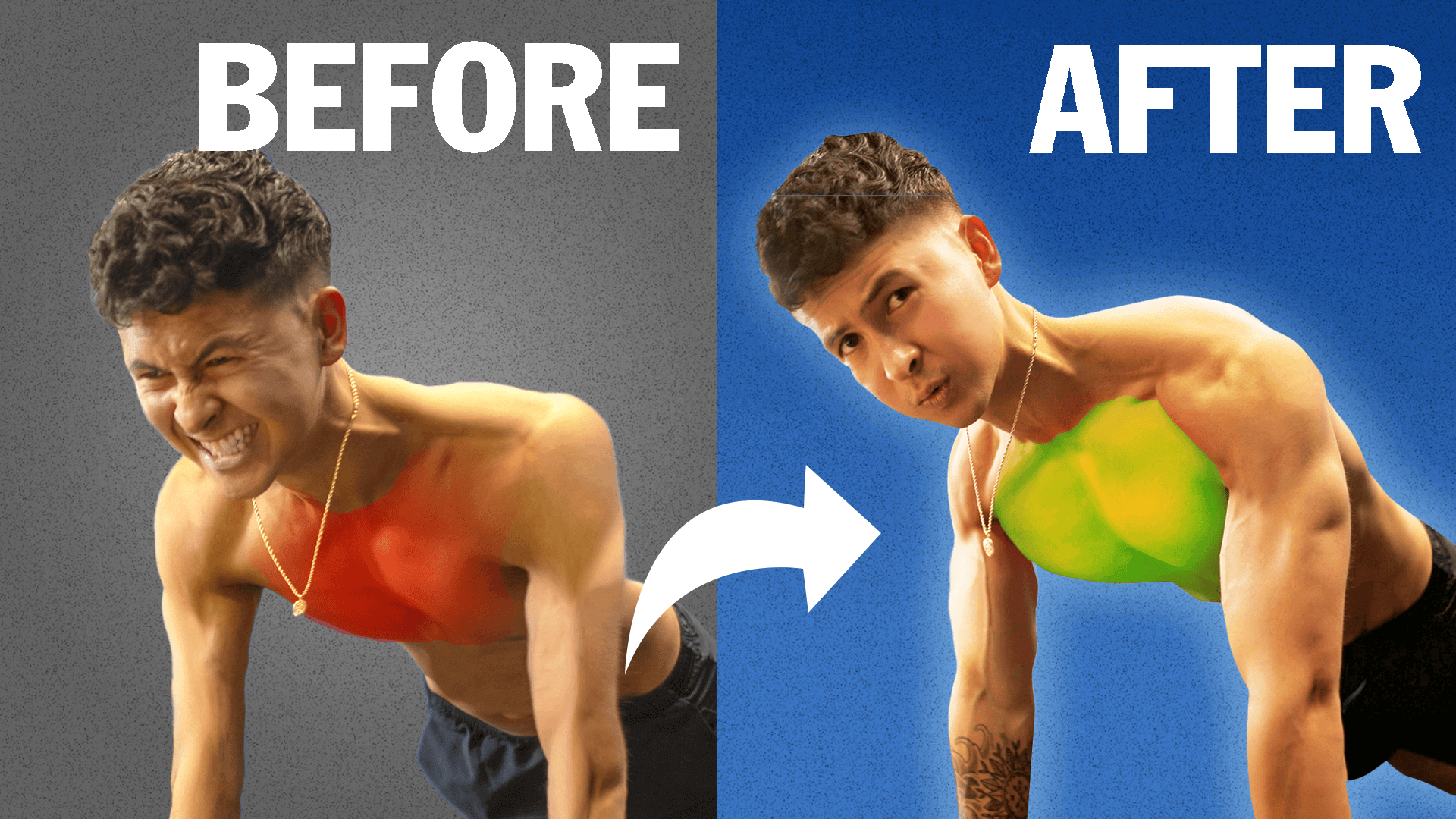 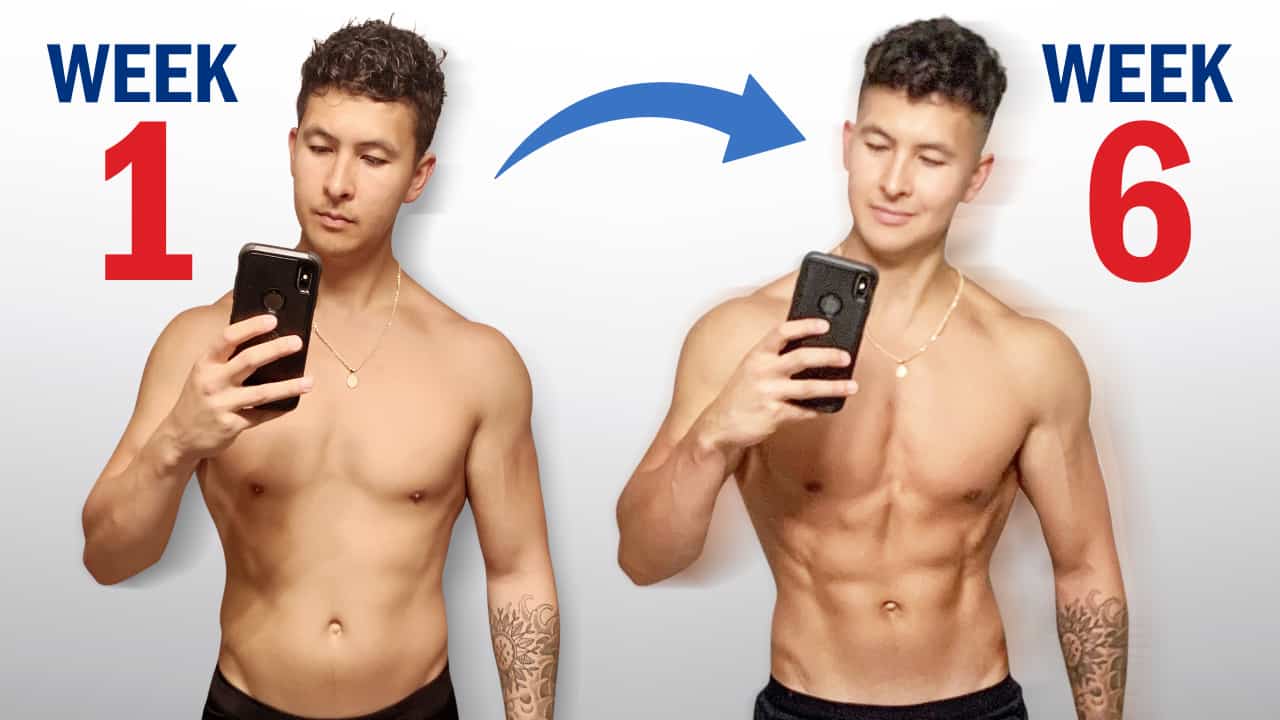 How To Lose A Lot Of Fat Quickly (Mini-Cuts Explained) 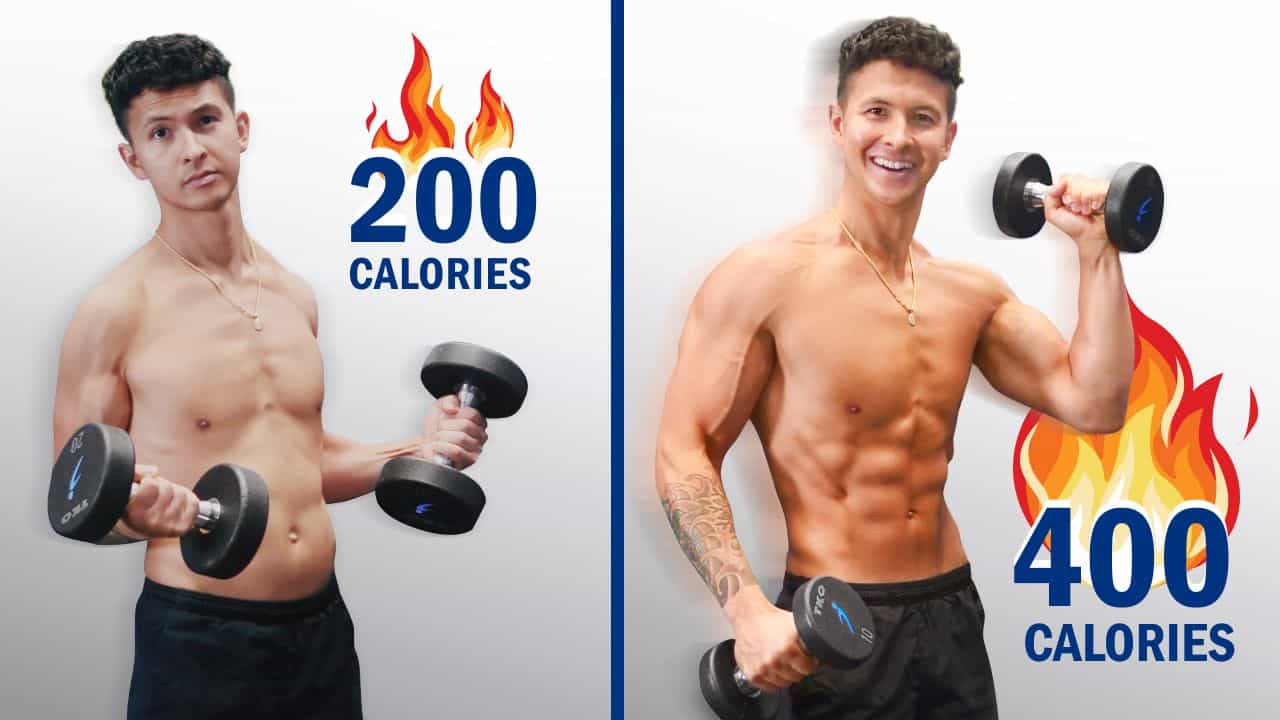 How To Burn More Calories Lifting Weights (Do These 3 Things)