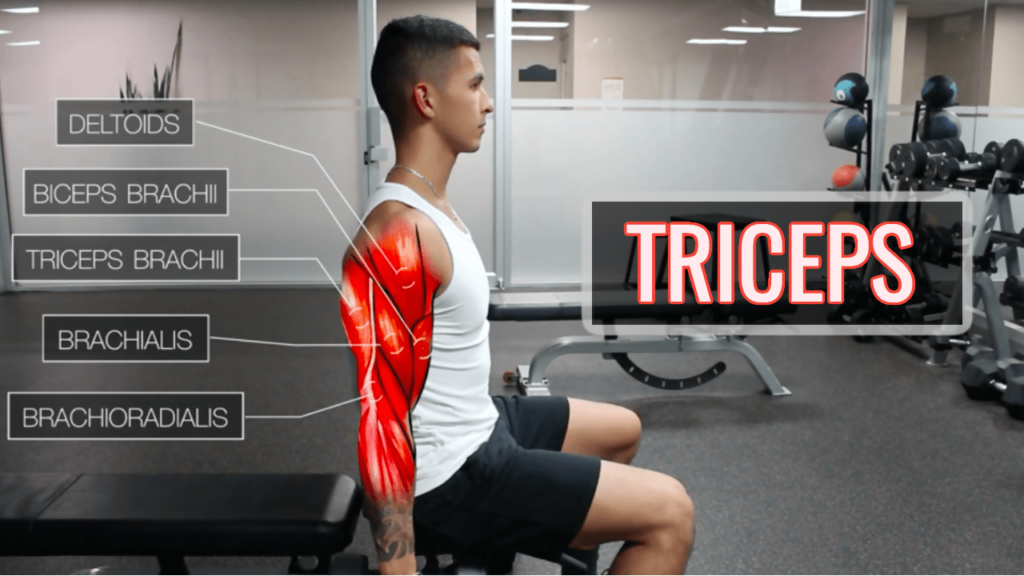 The Best Science Based Triceps Workout For Growth

In this article, we’ll cover the best tricep workout to hit every triceps head based on current scientific literature and our anatomical understanding of the arms.

If you’re seeking to build big, impressive looking arms then there’s no doubt that you have to prioritize the triceps. This is especially true since they actually make up most of the size of your arms – meaning that big triceps should be your priority if you want big arms. And, in order to best grow the triceps, you need to pay close attention to what tricep exercises you’re performing. But, to discover the best way to train your triceps, it’s vital that you first understand their anatomy. 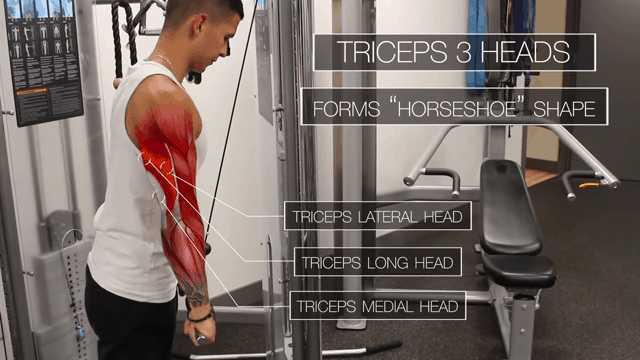 The Triceps is the “antagonist” to the Biceps.  It is the muscle that operates (moves) the elbow in the opposite direction, to that of the Biceps.  It extends the elbow, primarily.  This means it “increases the angle” of the elbow joint – moving the elbow from the bent position, to the straight arm position.

It is a single muscle, with one single insertion, but with three “heads”.  Each of these heads has a separate origin. The three heads are known as the lateral (or outer) head, long head, and medial (or inner) head. When each of the heads are properly developed, they form a distinctive upside-down horseshoe on the back of the arm.  And it’s important to know that although all 3 heads will be activated in all triceps movements, you can maximize the activation and put more emphasis on specific heads by choosing the right exercises as you’ll see in this article. 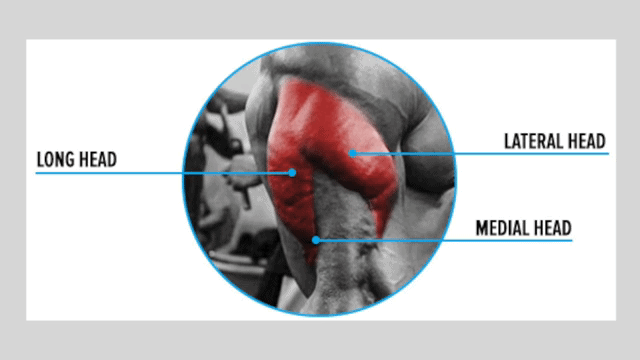 The Lateral head and the Medial head originate on the back of the humerus. However, the Long Head originates on the scapula – just below the shoulder socket.  Because the Long head is attached to the shoulder blade, it can participate (to a very small degree) in the upper arm pulling downward.  The other two heads (the Medius and the Lateral) only participate in elbow extension.

Well developed triceps flow naturally into the rea delts. Yet, many guys struggle to develop this muscle. Check out my complete rear delt program here. 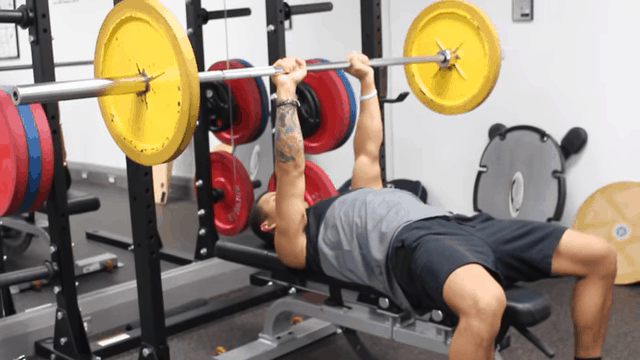 From the outset, as shown in this study by Hughes et al.  we can see that, similar to the biceps, the triceps are composed of around 67% type II muscle fibers. These are best stimulated by using heavy weight. And in fact, this study by Newton et al. showed that each jump in relative load going from 30%-100% of 1 rep max resulted in more tricep activation. This is very similar to what was found with the biceps.

Since the close grip bench press enables us to easily overload it and lift very heavy weights, I suggest starting with this exercise. Use heavy weight for fairly low reps but in a controlled manner in order to recruit all the motor units of your triceps. 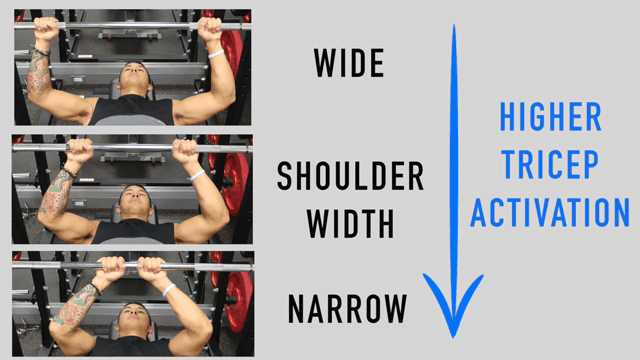 As for hand-spacing, this study by Lehman et al. examined triceps activation using 3 different grips: wide, shoulder-width, and narrow. The researchers found that the narrower the grip, the higher the triceps activation,  particularly in the long head. But given that there tends to be a lot of wrist and shoulder discomfort when using the narrowest grip, I’d suggest sacrificing a little bit of triceps activation and sticking to a grip that’s a little closer than shoulder width.

Want your arms to look really impressive? Then you need to make sure that your horseshoe triceps flow into powerful, developed forearms. Find out how to get them here. 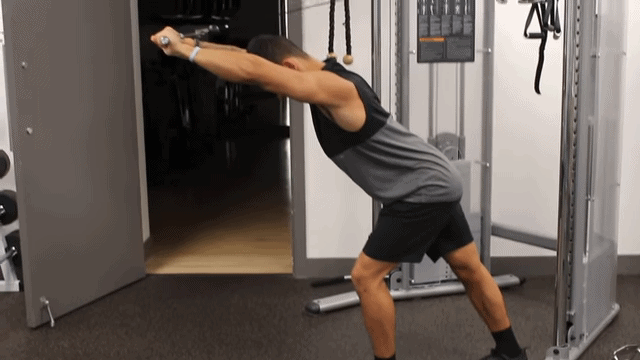 This next exercise is going to put more emphasis on the long head of your triceps. Keep in mind, though, that all 3 heads will be activated to an extent during any tricep exercise. But the reason it emphasizes the long head of the triceps more is because it’s the only head that crosses the shoulder joint.

A muscle produces maximal force when placed in a position of slight stretch. That’s why the long head can be better isolated by performing exercises that involve shoulder flexion. This exercise where the arms are overhead is a perfect example of this.

When performing this exercise, you want to ensure that your forearms are moving, and not your upper arm. This this will allow better isolation of the triceps. But keep in mind that this isn’t the only overhead triceps exercise that will emphasize the long head. Other alternatives are exercises like lying dumbbell extensions, single arm standing dumbbell extensions, and so on.

However, I find that these are a little too strenuous on the elbow which is why I prefer the cable version. But I suggest trying out these variations and pick one that minimizes stress on your joints especially when you use heavier weight.

Only got dumbbells to work out with? No worries – I’ve prepared a dumbbell only program for you to hammer your triceps right here. 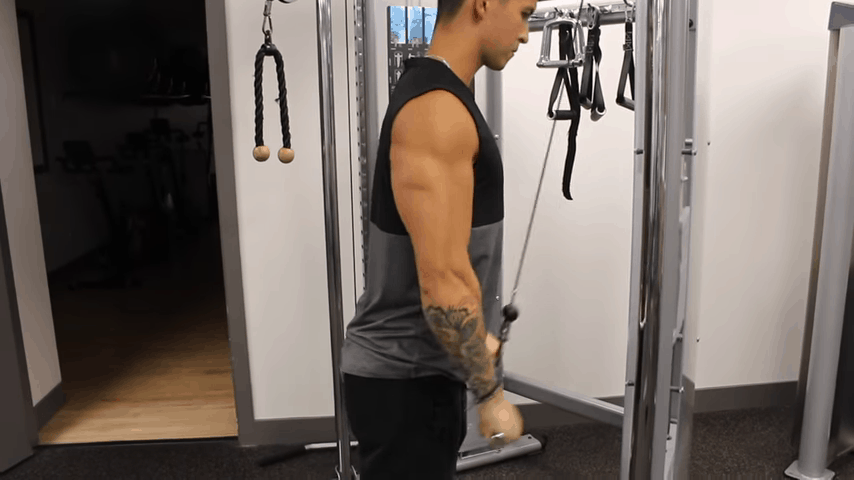 The reasoning for this next exercise is based on this study by Behren and Buskies which compared EMG activation of the different heads of the triceps with 10 different tricep exercises. They found that for the lateral head, the cable push-down with either a straight bar or V-bar elicited the highest activation which is why I’m recommending this exercise to hit the lateral head of the triceps. 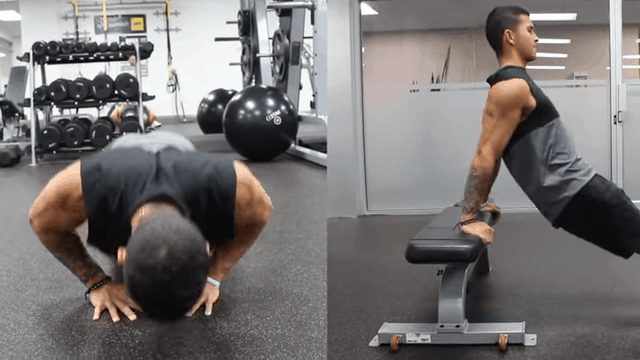 A quick glance at the enormous horseshoe triceps of gymnasts proves that you don’t necessarily have to train with just weights in order to build impressive triceps. Utilizing bodyweight exercises can be effective as well. This is part of the reason why I’m suggesting performing either bench dips or triangle pushups as a finisher exercise for the triceps.

In addition, the study I previously showed by Behren and Buskies  showed that the medial head was best activated with triangle push-ups and bench-dips. Since our previous exercises don’t emphasize the medial head as much as these exercises do, you definitely want to pick one of them to do as your last exercise.

I would personally choose the triangle push ups over the bench dips, however. It has been shown to have superior overall triceps activation as shown in this study by the American council of exercise. It also seems to be less stressful on the shoulder joint for most people. So again, try them both out and see which one you prefer. And for this exercise, I recommend training to failure for all the sets you perform.

Putting It All Together

Now that we’ve discovered the best science based exercises for developing thick, horseshoe shaped triceps, it’s time to put them together in the form of a muscle pumping workout to stimulate maximum growth in minimum time.

In this article, you’ve discovered a fantastic science-based workout to help you to build bigger arms faster. It proves that it is possible to build quality muscle fast. However, in order to make consistent gains in lean muscle mass you need to follow a complete step-by-step guide that’s backed by science.

That is precisely what my Built by Science programs provides. I’ve dug deep into the research to ensure that every single movement provides you with the maximum benefit for the time and effort invested. That means that you can be confident that what you’re doing in the gym is going to bring you real gains faster and more efficiently.

The Best Science Based Triceps Workout For Growth 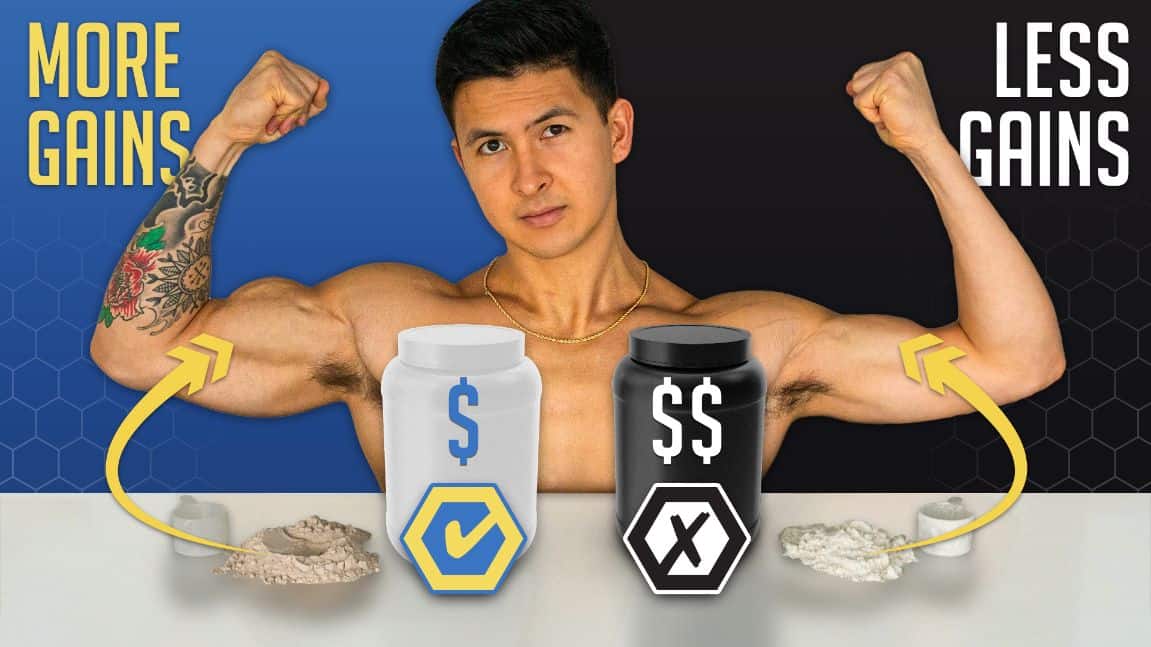