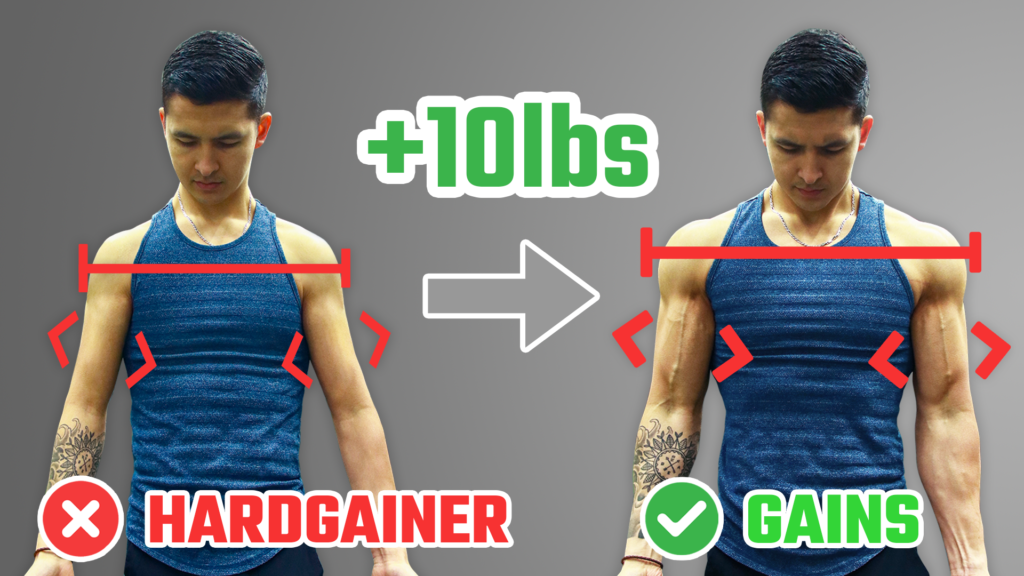 You’ve been training for a while, you’re eating all the rights food, and, on paper. doing everything right. But despite all of this, you just can’t seem to pack on any size, and the muscle-building process for you seems to be abnormally slow when compared to your peers. Here are some tips on how to (finally) pack on muscle as a hardgainer in this article.

I’ll be honest. I was a ‘hardgainer’ myself when I first started training.

It seemed that no matter how hard I trained and how much I ate, I just couldn’t seem to put on weight and add size to my skinny frame.

Now, note that there is some research out there showing that hardgainers do in fact exist. And I’ll go through the applicable findings from those studies later on in this article. But the truth is that most “hardgainers” are simply making a few mistakes with their training and nutrition. These mistakes then prevent them from building muscle and packing on mass as quickly as they should be.

And this was exactly the case for me. I initially thought that I was a lost cause as a skinny hardgainer. In reality, though, I was really just making a few key mistakes with my plan. This took me a couple of years to realize and fix. But really did kickstart my progress once I corrected them.

And I’m positive that this is the case for many of you as well. So to help you out, I’ll show you how to avoid these crucial mistakes by going through step by step how to set up your plan to pack on 10lbs of muscle as a hardgainer. And, also, how long you should expect that process to take. Without further ado, here’s my advice for hardgainers.

1) Training: Choose The Right Exercises, Rep Schemes, And Volume As A Hardgainer

The first thing you need to do as a hardgainer is ensuring that you have your workout setup correctly. What this means is that you need the right exercise selection, rep schemes, and volume. These will enable you to maximize your efforts in the gym. And the truth is that most skinny guys who struggle to put on size just don’t have these variables down. Instead, they use sub-optimal approaches when it comes to their training. Thus explaining why they experience slower growth.

So what I’d recommend, is start out with one of the free workout routines I’ve made in past articles (full-body, upper body, lower body) as these are all set up optimally for you. For access to the bulking up routine suitable for hardgainers:

But what’s even more important than the workouts themselves is the next step. Which involves how you then go about progressing them.

Because as I’ve said in my past articles (e.g. here), the key to forcing your muscles to grow has to do with progressive overload. This simply involves having your muscles do more work. And lift more weight over time such that they can gradually recover bigger and stronger in response to its increased demands. 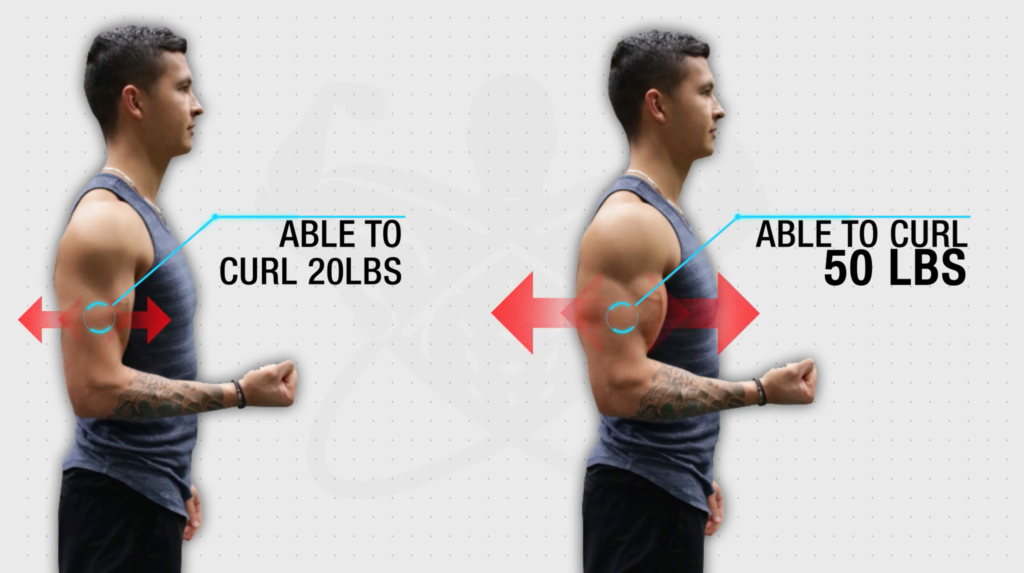 Which means that you need to prioritize overloading your workouts. And getting stronger week after week, month after month, year after year.

The best way to do this is to simply stay consistent with your workout routine. And then use a progression method, such as double progression, to ensure that you’re overloading your exercises over time.

You may be doing all of what I previously mentioned correctly. But the next step for most people is where the true problem lies.

3) Nutrition: Eat Enough To Pack On More Mass As A Hardgainer

And this has to do with your nutrition. Because in reality, most hardgainers struggle to build muscle simply because they aren’t eating enough to recover. And grow even when they think they are.

This was the case with me back in the day. I knew I had to eat somewhere around 3,000 calories to start putting on weight. But after months of stuffing myself daily with what I thought was well over 3,000 calories of food, I still wasn’t putting on weight. It wasn’t until I actually took the time to sit down and track the calories that I was eating on a daily basis did I realize that I was undereating by around 500 calories.

Thus explaining why I was constantly stuck at that same weight. And failing to pack on more size. But I’m sure many of you are making this exact mistake. As a hardgainer, you’re eating fewer calories than you need in your diet.

To avoid this, what you need to do is first figure out how many calories you’re actually eating. Rather than relying on how much you think you’re eating. So start tracking your calorie intake for the next few days. And get a good sense of what your average intake seems to be.

Then, using this number as a baseline, it’s time to very gradually increase this intake by 100 calories or so a week. Just to best avoid any stomach and appetite discomfort. 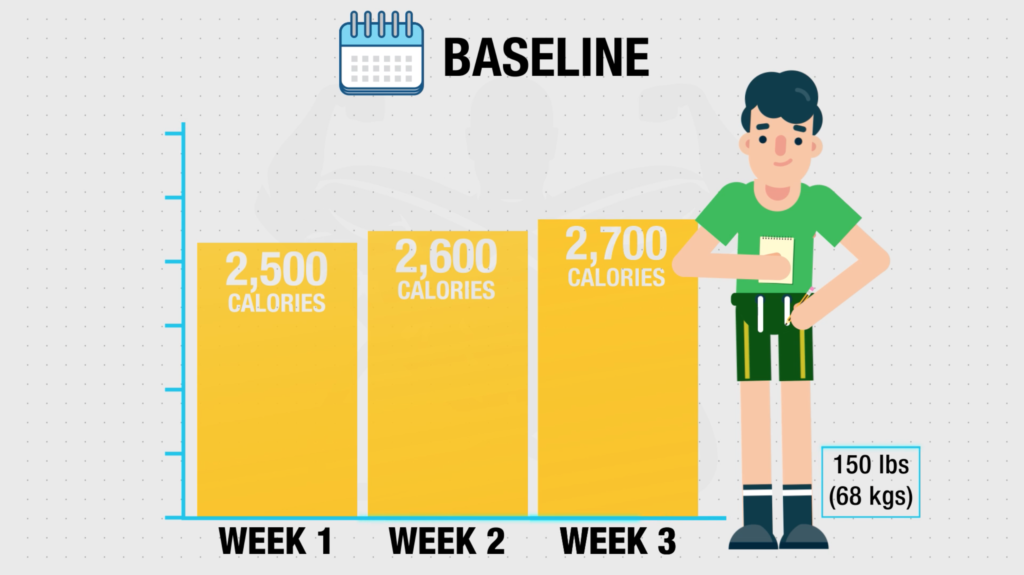 And then do this until you start gaining weight at a rate of roughly 1% or so of your bodyweight per month. Since that’s what research indicates for most lifters is the most effective rate of weight gain to maximize muscle growth while minimizing excess fat accumulation. 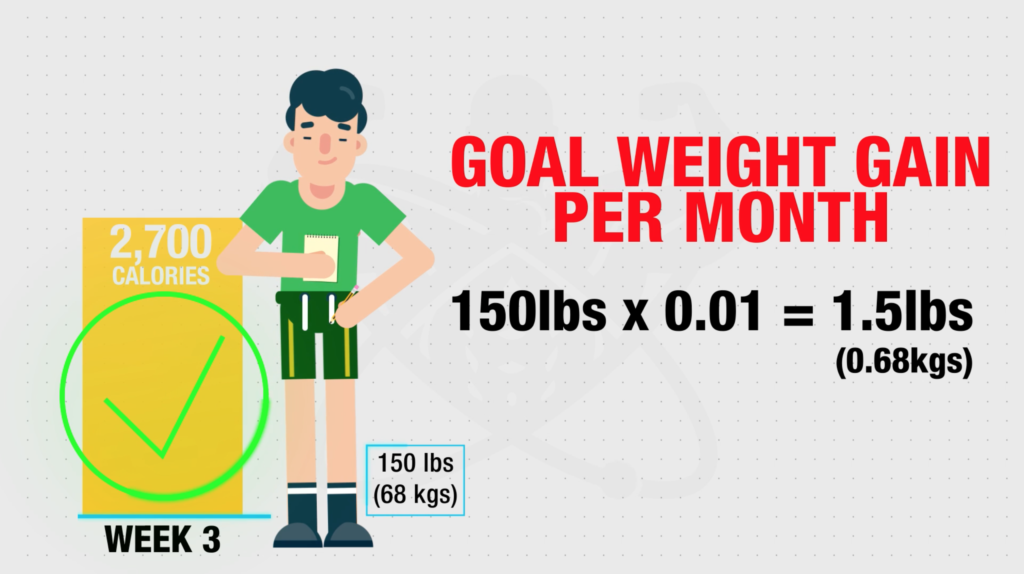 Now, this new calorie intake for many of you will likely be quite a bit higher than you’re used to. And I can tell you from experience that this becomes very uncomfortable and difficult to do. Especially when you ideally want at least 80% or so of these calories to come from whole, nutritious foods as opposed to junk.

How To Increase Your Calorie Intake As A Hardgainer

To best help you with this though, here are a few tips I’d recommend incorporating.

Increase Your Meal Frequency, Not Volume

Don’t just increase the actual calorie content and volume of your meals. That’s because research has shown that increasing your eating frequency is the more effective option if you want to increase your daily calorie intake without impacting your appetite as much. For instance, this study found that if you have a 300 calorie snack after lunch, you’ll naturally eat around 100 fewer calories for dinner. Resulting in an “accidental” gain of 200 calories with minimal stress on your stomach or appetite. And for you, this can be as simple as incorporating high calorie yet nutritious snacks between your meals. Trail mix, for example. Which can easily bump up your calorie intake considerably without impacting your appetite by much.

Next, it’s vital that you make your diet less filling by choosing foods that are less satiating. So, contrary to my article I did on the best meals for fat loss, where I recommended to start eating the most filling foods based on a satiety index developed from a 1995 study, in your case you’d instead want to avoid these highly filling foods such as potatoes, fish, and oats as much as possible. And instead opt for less filling yet still calorie-dense foods such as white pasta, rice, muesli, and bananas, for example. 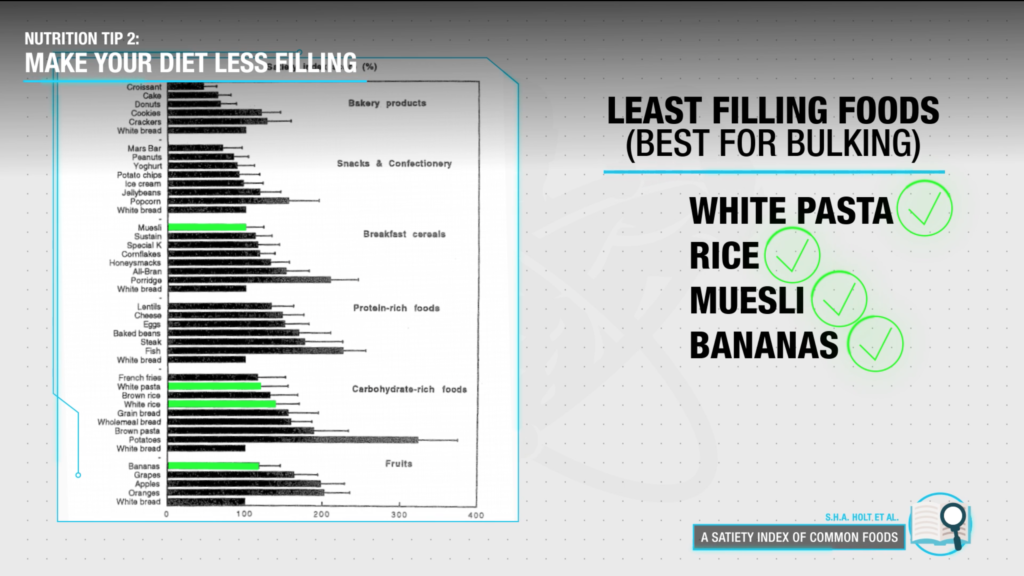 These will be the most effective foods for you to use to bump up your calorie intake. Without affecting your appetite as much.

We know the importance of protein for muscle recovery and growth. But we also know that protein has been consistently found to be the most satiating of the three macronutrients.

A 2005 paper found that when subjects increased their protein intake from 15% of their daily calories to 30%, they subconsciously decreased their daily calorie intake by roughly 441 calories a day as a result of the increase in fullness they now felt. Meaning that if you’re struggling to eat enough calories, you’ll want to minimize your protein intake relative to your carb and fat intake.

We know based on a recent meta-analysis that a protein intake of roughly 0.72g/lb of body weight is enough to maximize your gains. So instead of going way beyond this minimum which will just result in increased fullness, simply aim to hit this minimum protein intake daily. And then utilize more carbs and fats instead of protein to boost your calorie intake. As doing so will minimize the fullness you feel and make it easier for you to ingest enough daily calories. 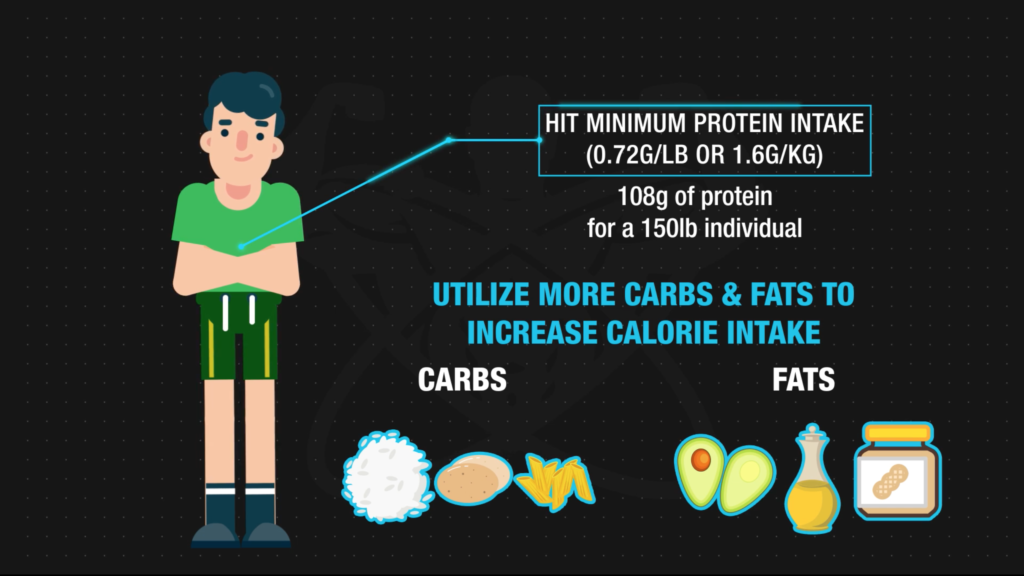 As A Hardgainer, You Need To Track/Adjust Your Plan

Now the last step has to do with tracking and adjusting your plan accordingly. And there are 3 things you’ll want to track. These will then determine what you need to adjust.

First, you want to track your morning body weight every day. And take a weekly average of it at the end of every week.

If after a month:

Then it’s an indication that you’ll just need to bump up your calories slightly. You can do so by ingesting some extra carbs and/or fats, for example. Just keep doing this until you’re on track with your monthly goal weight gain targets.

Next, you want to track your performance in the gym. As well as various bodily circumference measurements like your arms, chest, shoulders, and legs, for example. Ideally, your strength and these bodily measurements should be gradually increasing along with your body weight. As that’s all a good indication you’re doing everything correctly and successfully putting on muscle mass.

However, if your weight is increasing but you’re just not seeing much improvement or plateauing in your performance in the gym and your circumference measurements, then you may need to actually adjust your workout plan.

More specifically, based on research on hardgainers, you may want to increase the number of sets you’re performing in the gym. A 2018 paper by Schoenfeld and colleagues analyzed the impact that increasing the volume of a full-body workout had on muscle growth in trained individuals.

What they found is that as you increased the number of sets performed per exercise from 1 set all the way up to 5 sets, the number of non-responders decreased.

How To Increase Workout Volume When A Hardgainer Has Plateaued

Then temporarily increasing your workout volume may be the solution. Which you can do in many ways, but one of the simplest ways is to do the following:

By using this approach, many of you non-responders and true hardgainers out there will likely see a significant improvement in the gains that you’re making.

Takeaway: How To Gain Muscle As A Hardgainer

But keep in mind guys that hardgainer or not, muscle growth takes time. It’s a very slow process that requires a great deal of patience and consistency. For example, even with all the right systems in place and with a weight gain of roughly 1% of your body weight per week, packing on 10lbs of muscle would take the average 150lb individual who’s already past their newbie stage in the gym at least 7 months to do so. But realistically probably around 8-10 months or so given that some of this weight gain would likely be fat.

Don’t let this demotivate you though. Because although 10lbs of muscle may not sound like a lot, it will make a huge difference to your physique. So yes, muscle growth does take time and is a slow process but the end result is definitely worth it.