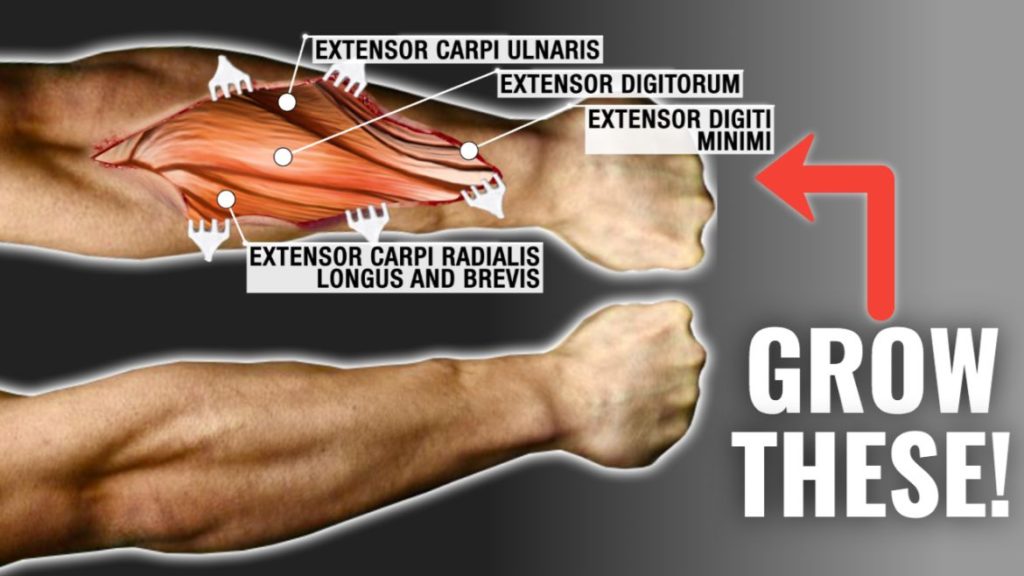 How To Get Bigger Forearms FAST (3 Science-Based Tips)

If you want well-developed and thicker forearms, read this article. Here, I cover 3 easy, science-based tips you can learn so you know how to get bigger forearms – and fast.

Thick, well-developed forearms are one of the most important features that you’ll want to achieve. Not only do they dramatically improve the appearance of your arms, but they also play a vital role in strengthening your grip to handle more weight.

That said though, when most people aim to strengthen and grow bigger forearms, they fail to realize just how many forearm muscles there really are. And what they’re responsible for doing… 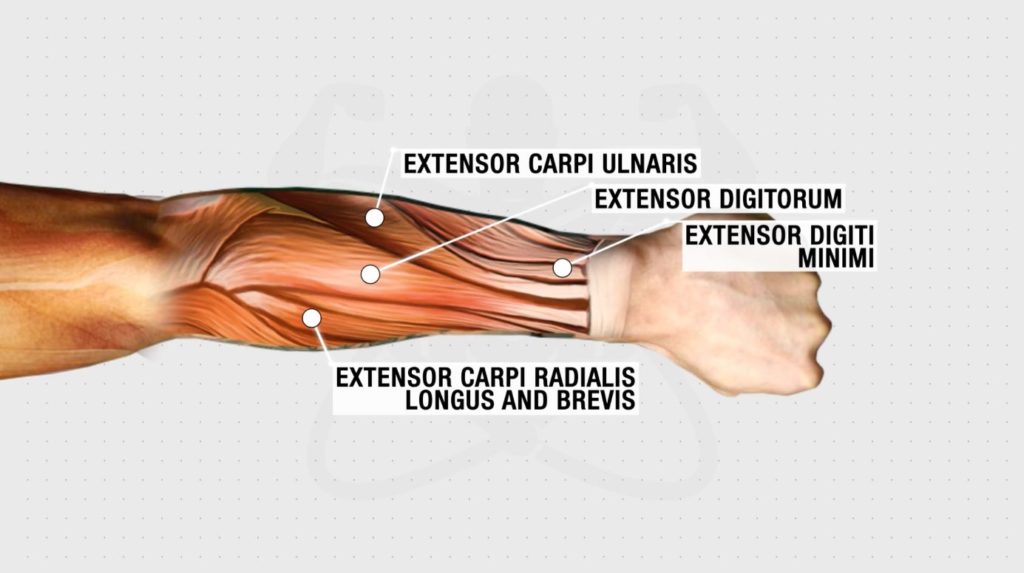 …so, they end up thinking that a few sets of forearm curls and wrist extensions are all they need.

Although these exercises can help, if you want to maximize your forearm gains then you need to be incorporating forearm exercises that enable you to:

In this article, I’ll show you exactly how to best do that with 3 easy tips. Implement them, and you’ll finally see the forearm growth you’re after. And in the fastest way possible!

The first tip is very easy to implement. And yet, will instantly start to make a big improvement in your forearm development. It’s simply a matter of taking the existing bicep curls that you’re currently doing in your forearm workout routine and swapping them out for more “forearm focused” curls instead.

It’s true that the traditional bicep curls work the biceps to a much greater extent than the forearms. But by making a few tweaks, we’ll be able to shift more of the emphasis and growth to two of your forearm muscles: 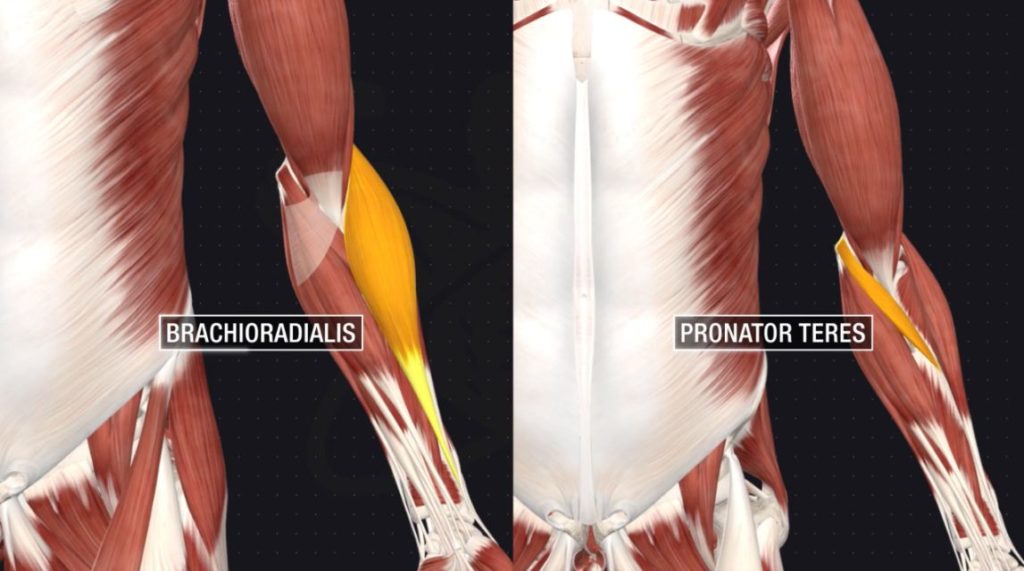 Which is important because growing these two muscles will make a very visible difference in the overall size and appearance of your forearms. That’s because of two reasons.

First, these muscles lay the most superficially in the forearm – meaning that they’re closest to your skin and thus most visible and noticeable when grown. And second, they’re also some of the largest muscles of the forearm. 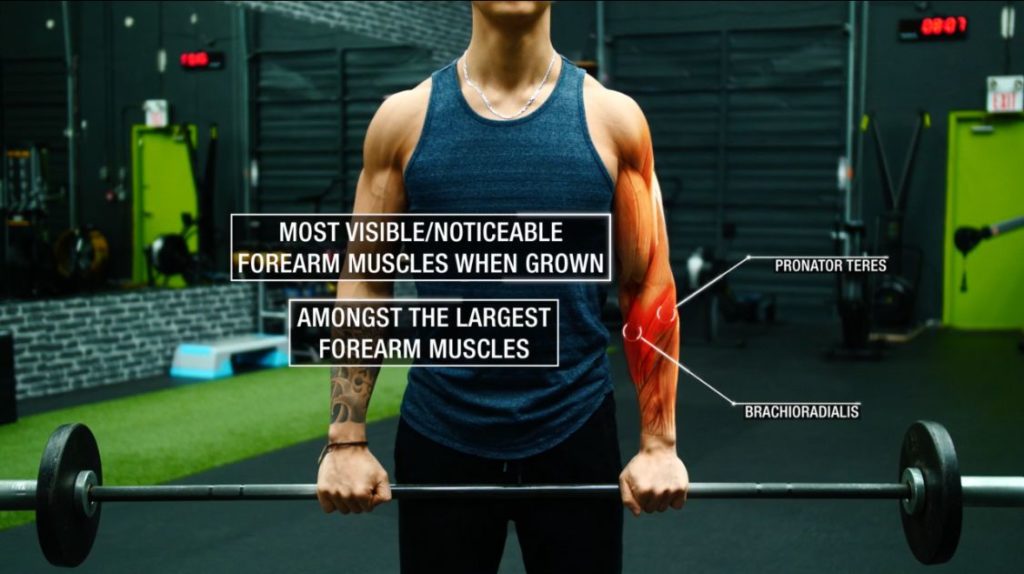 Well, there are two things we can do.

Number 1: Change To A Pronated Grip

The first thing we can do when it comes to how to get your forearms and wrists bigger is to change to a pronated grip instead of a supinated grip. 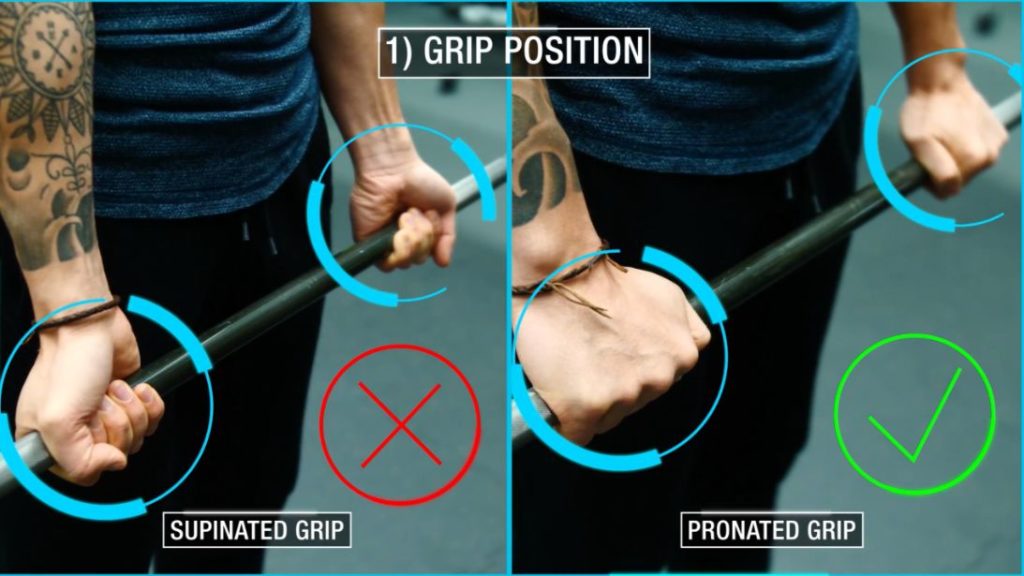 As shown in EMG analyses like this one from the Journal of Neurophysiology, a pronated wrist position when curling elicits the greatest activation of both the brachioradialis and the pronator teres muscles when compared to a neutral or supinated grip.

And it’s not just that, too. This position also elicits the least biceps activation as well. Meaning that with this grip you’re able to most effectively shift tension away from the biceps and onto the forearm muscles instead. 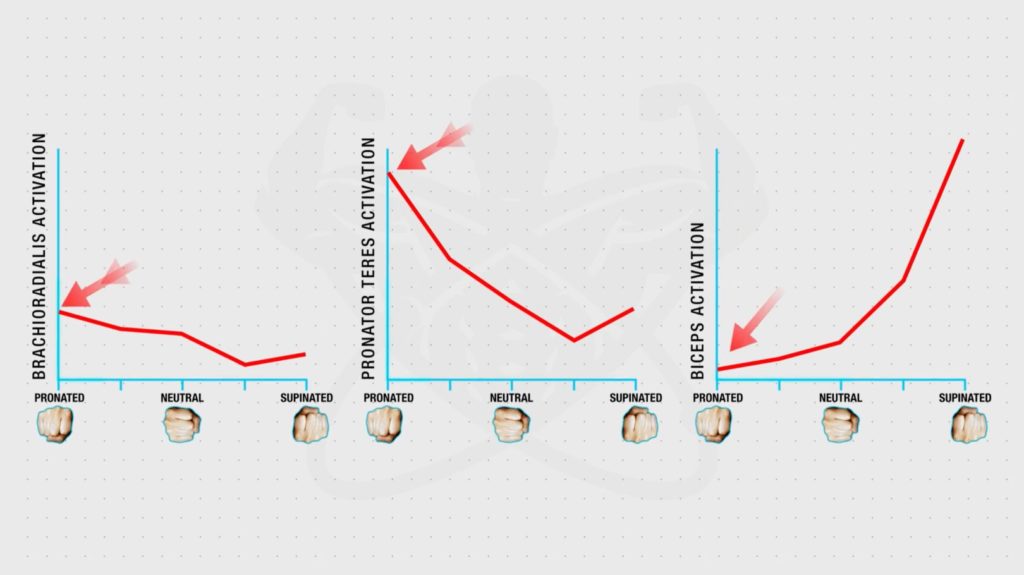 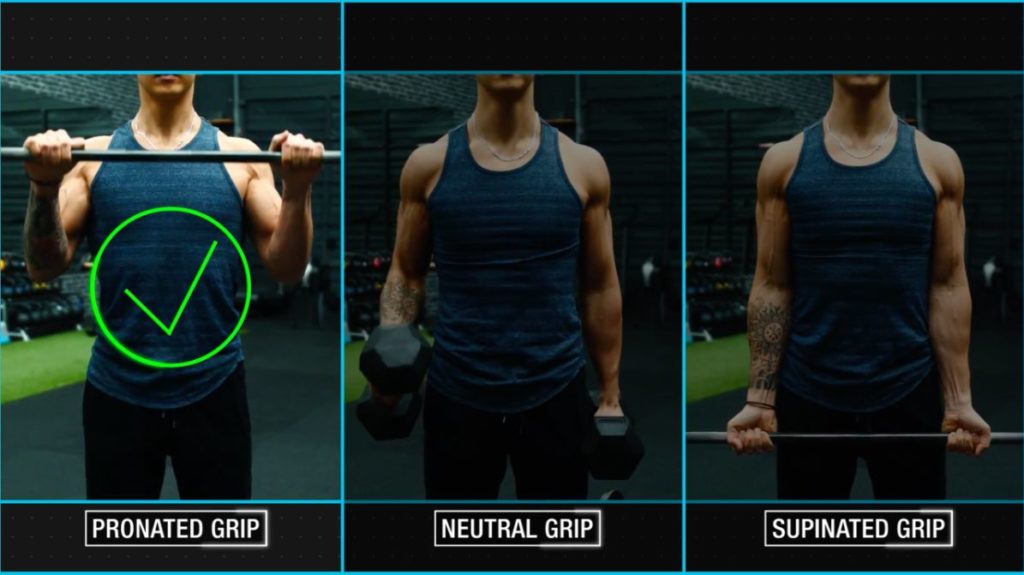 So, reverse curls are obviously a great option to enable you to do this. And hammer curls would be the next best option, especially since they tend to be more friendly on the wrists. 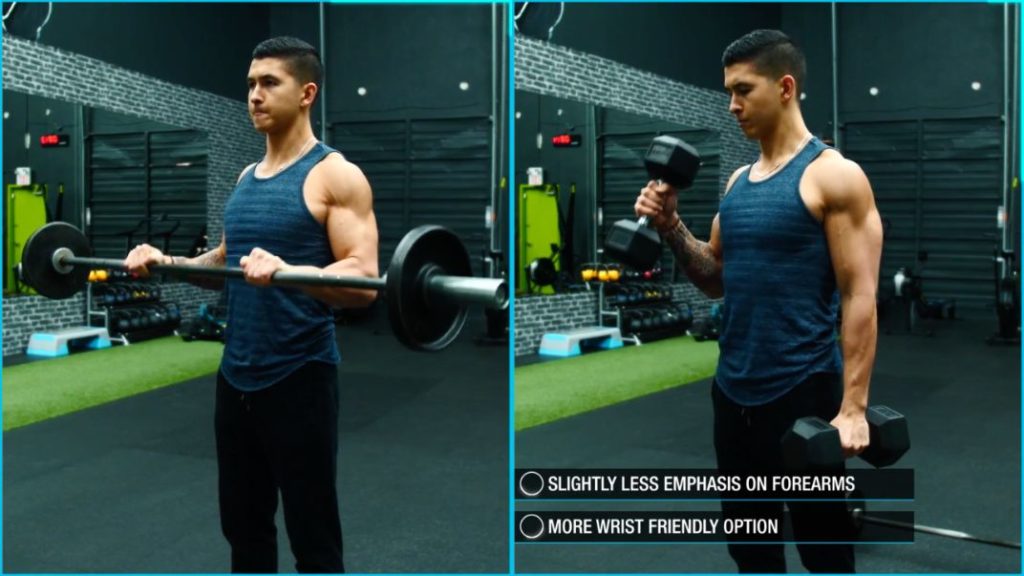 But there’s another tweak we can make to these exercises to make them even more effective for forearm growth. And it has to do with playing around with the strength curve of the exercise.

Because we know based on biomechanical analyses (here, and here) of the elbow flexors that the brachioradialis, one of the biggest forearm muscles as mentioned, contributes the most when it reaches higher degrees of elbow flexion.

So – roughly within the top half of a curl, for example. Whereas in contrast, within this range of motion is when the biceps contribute the least to the movement. 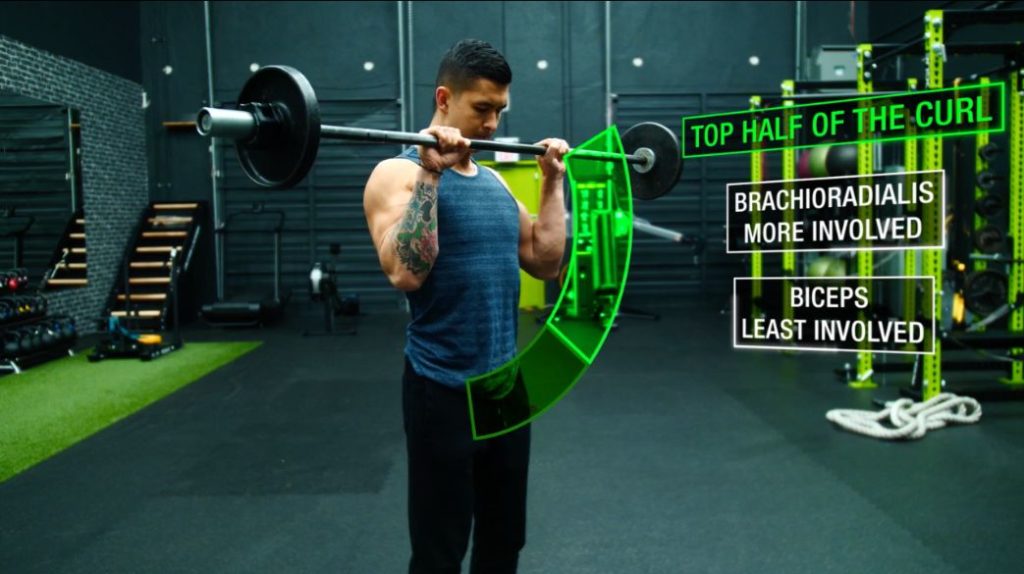 Meaning that curls with a strength curve that elicits peak forces at the top half of the movement will develop the brachioradialis to a greater extent than the biceps.

The easiest way to achieve this type of strength curve with the reverse curl, for example, is by applying a form of accommodating resistance during the movement.

Which can be accomplished by simply attaching a resistance band to the bar to resist you as you curl. With this in place, the top half of the movement will now be considerably harder than the bottom half. And will as a result effectively emphasize the brachioradialis to a much greater degree. While also minimizing the involvement of the biceps. 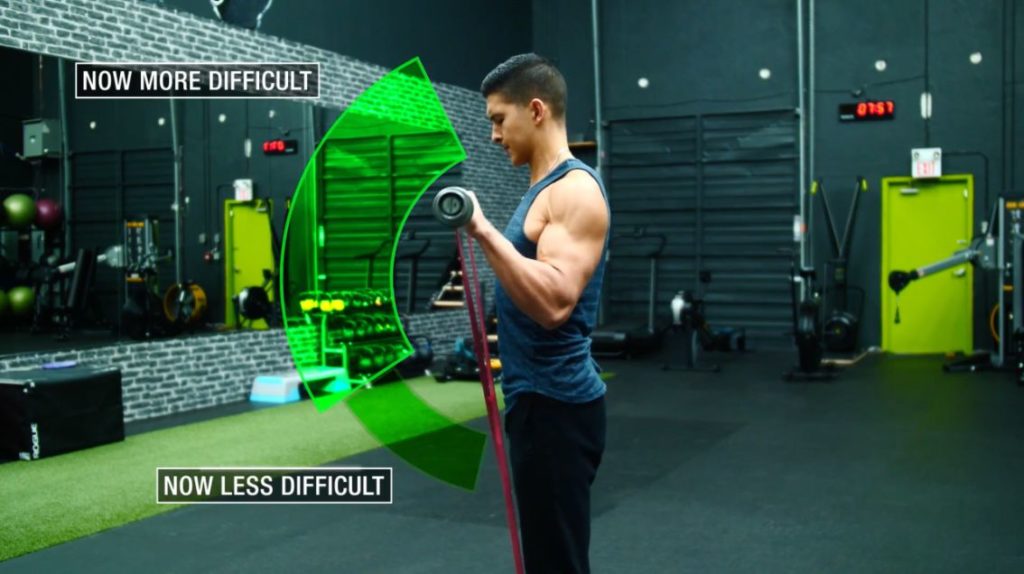 Next, to speed up your forearm growth more, you’ll want to incorporate some additional direct forearm work to your routine. Many barbell and dumbbell movements do involve an isometric contraction of the forearms and will indirectly help with their growth. But we know based on research that dynamic contractions that take the forearms through their full range of motion are better for muscle growth (Study 1, 2, 3, 4, 5).

In fact, studies (here, here) that have analyzed the effect of adding in additional forearm exercises into existing training regimens have found that it significantly increases forearm size and strength to a much greater degree. 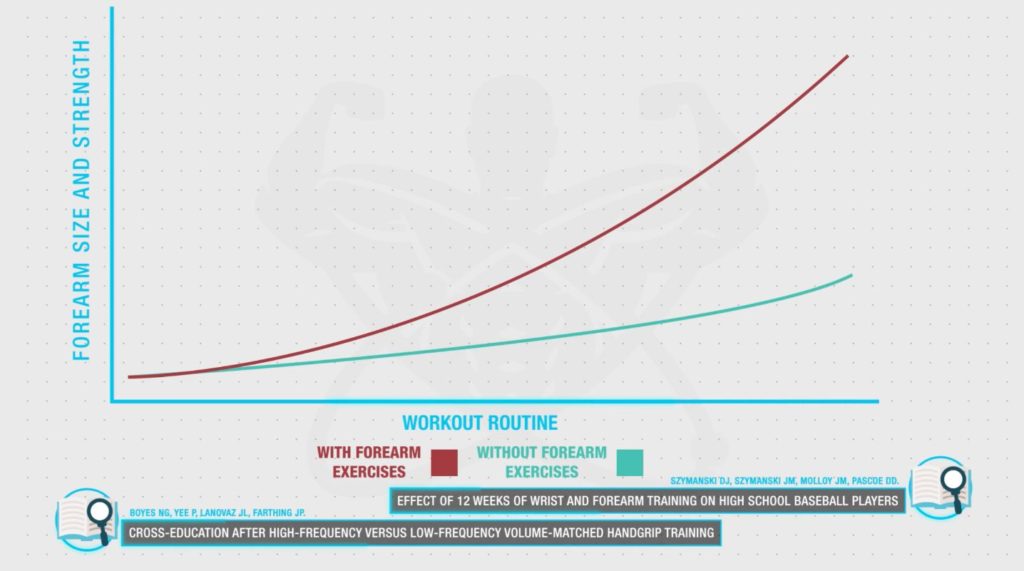 So what are the best forearm exercises that you should start including into your routine?

How To Get Bigger Forearms: Best Forearm Exercises To Include

Well, we’ll want to ensure that we’re hitting all of the forearm muscles. And their respective movement functions.

So first, we want to hit the forearm flexors and the forearm extensors. Which, as their names imply, simply act to flex and extend the wrist, respectively. 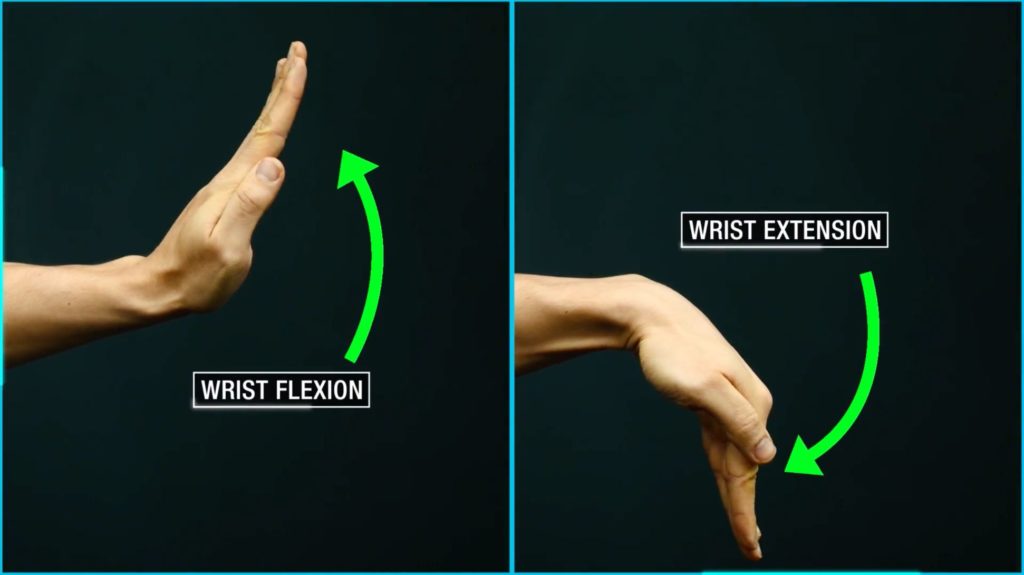 So, to best work the: 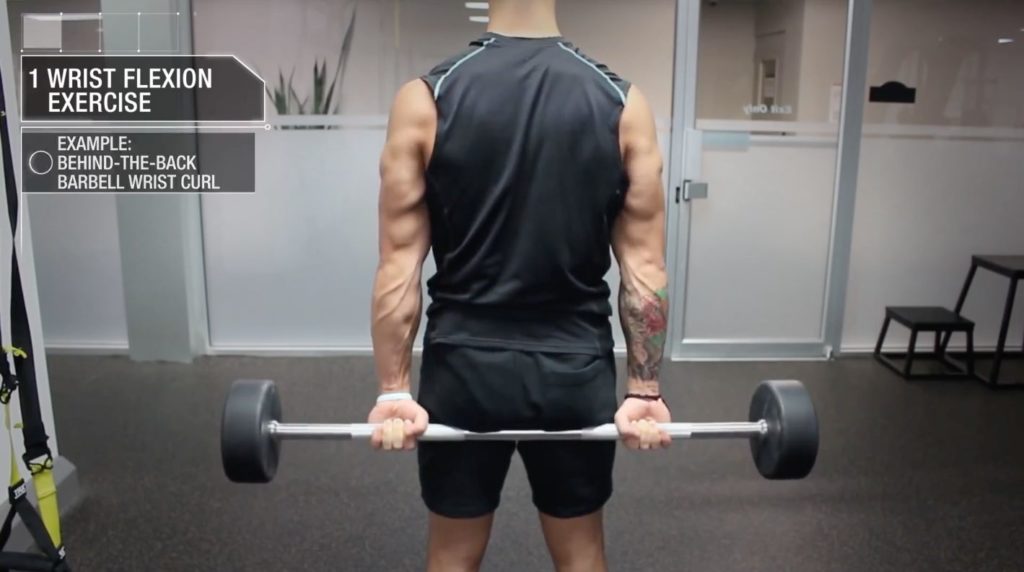 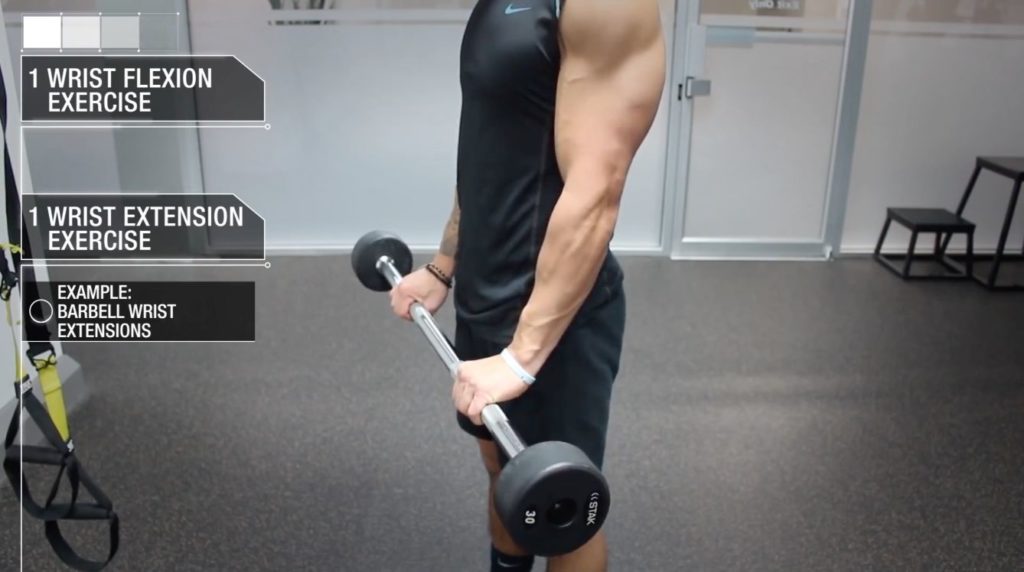 Now although this alone will hit many of forearm muscles, it’s important that you don’t just stop here as most people do. Because the forearms still have a lot more potential for growth which we can capitalize on. You can do so by incorporating some of the other movement functions of the forearm muscles beyond just flexion and extension.

And this is why next we’ll want to move onto a forearm exercise that incorporates adduction and abduction of the wrist. 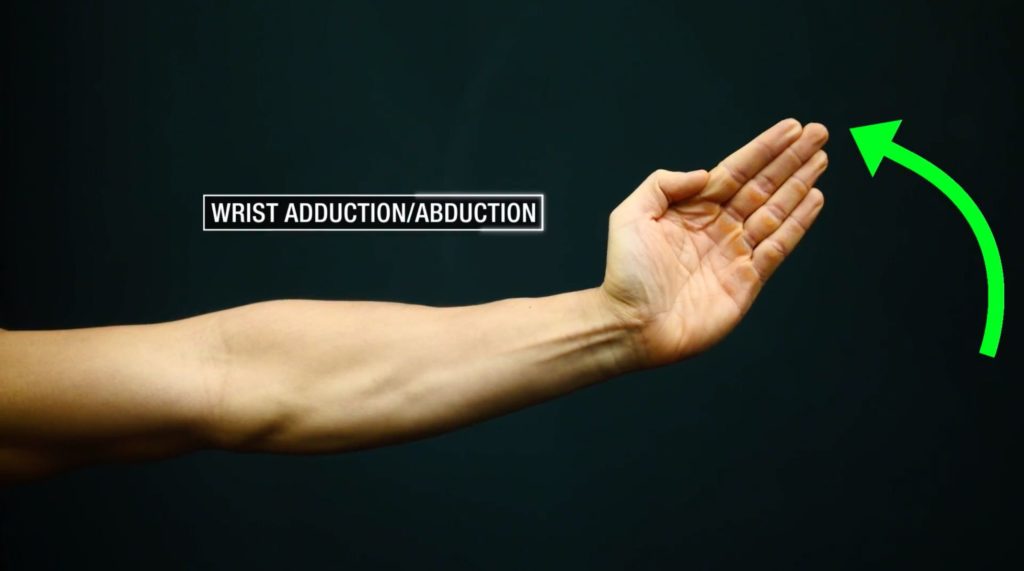 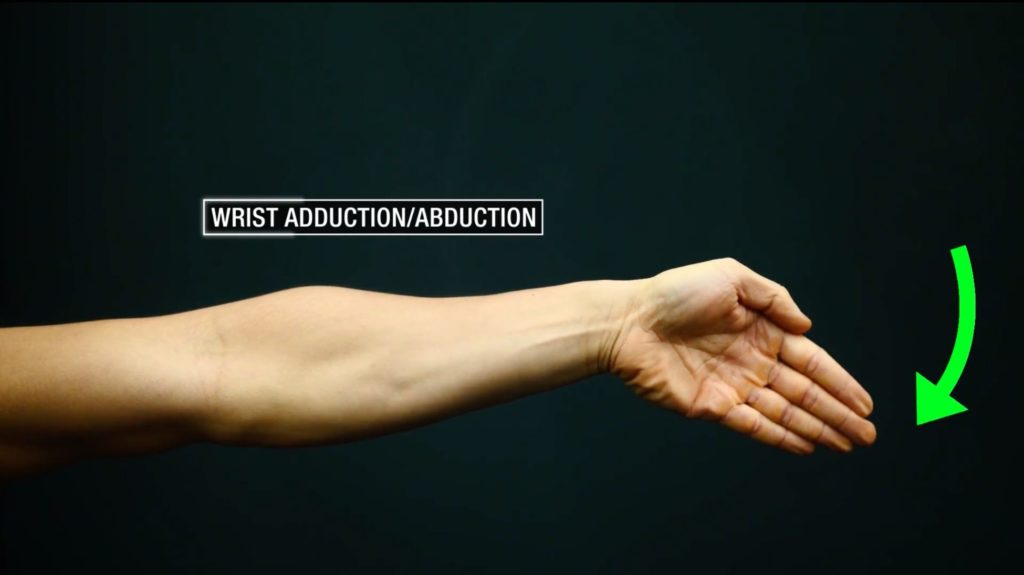 Doing so will emphasize 7 of the forearm muscles that are designed to perform this very movement function.

And one great exercise to accomplish this is dynamic barbell suitcase holds, where you:

As you do so, the various forearm muscles responsible for adduction and abduction of the wrist will then be forced to work to balance the weight. And to progress with this exercise, simply load it with more weight or aim for more reps. 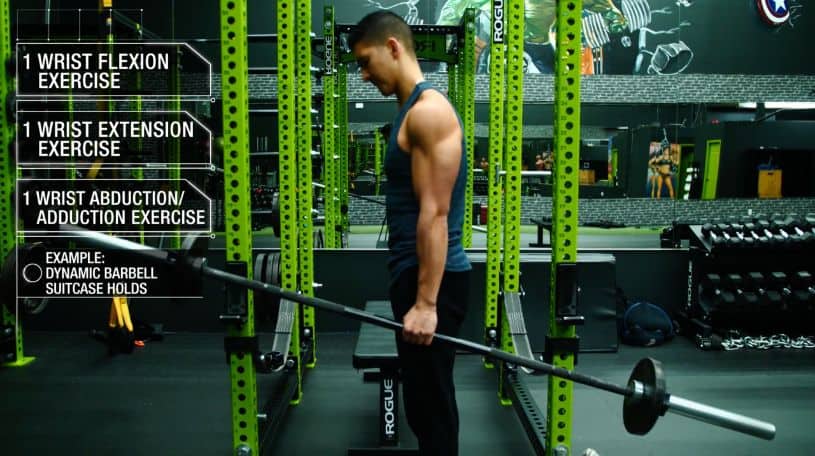 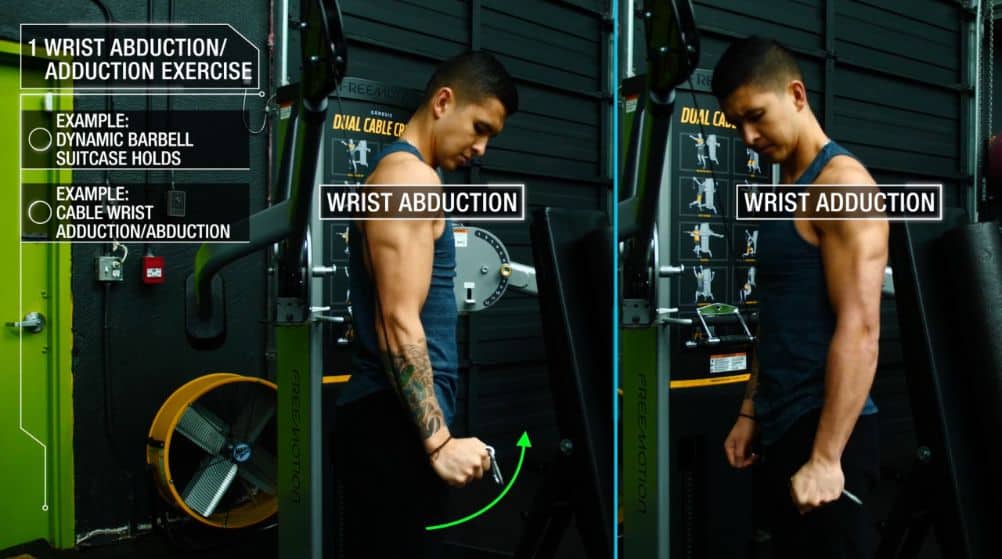 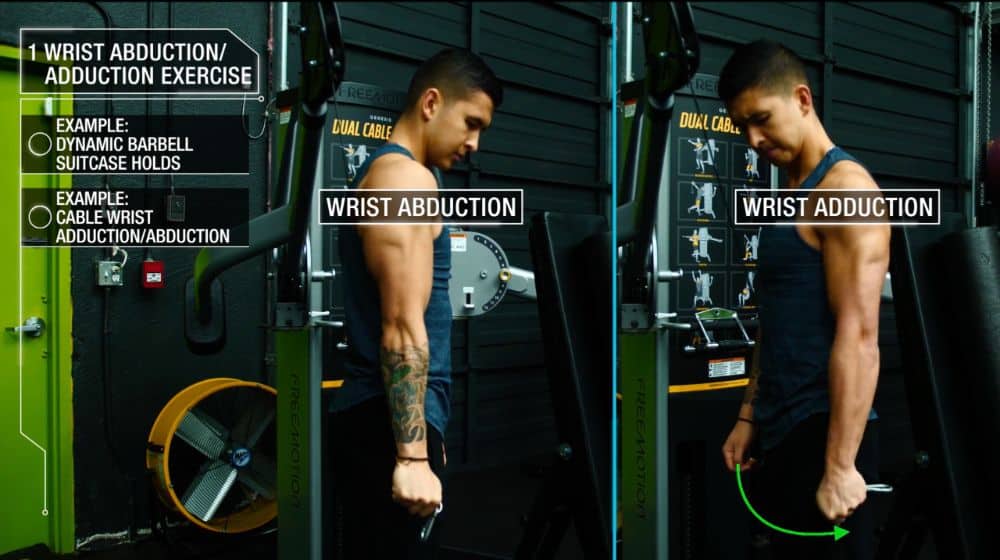 You can also even implement wrist adduction into your triceps exercises as well for example, by incorporating it at the very end of a rope pushdown just to easily get in a little more work for your forearms throughout the week.

But we don’t just want to stop there. That’s because we’re still missing out on another important movement function that will emphasize 4 of the largest forearm muscles shown below:

And it’s the pronation and supination of the forearm. 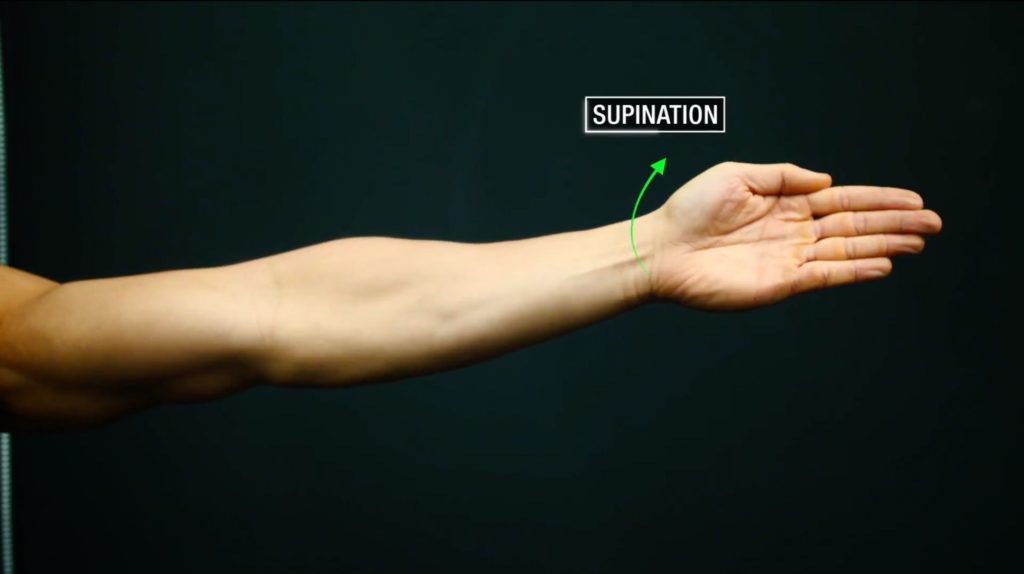 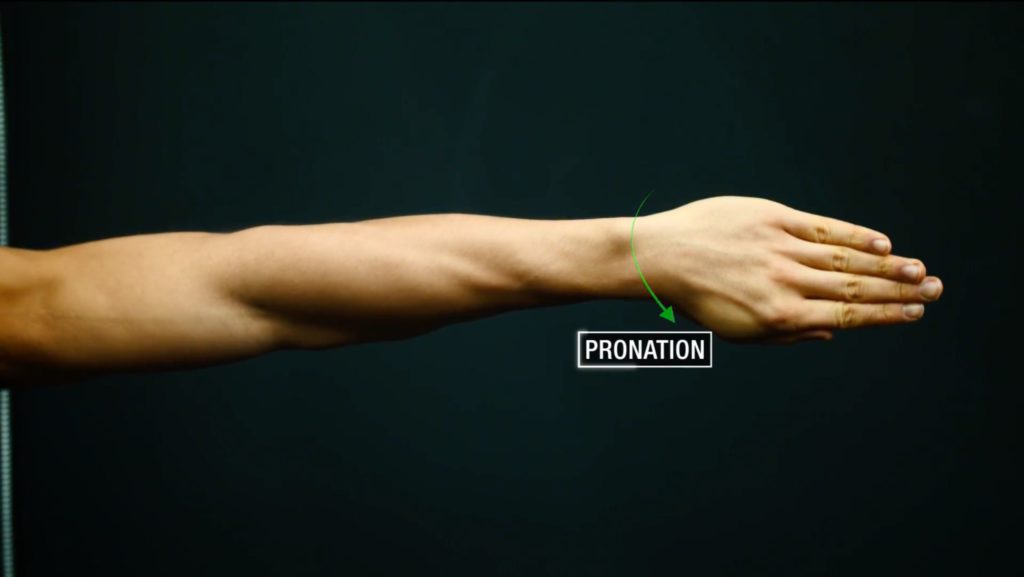 So to most effectively work and grow these muscles, we’ll want to incorporate one exercise that performs this movement function of active pronation and supination.

Which can be easily done by simply: 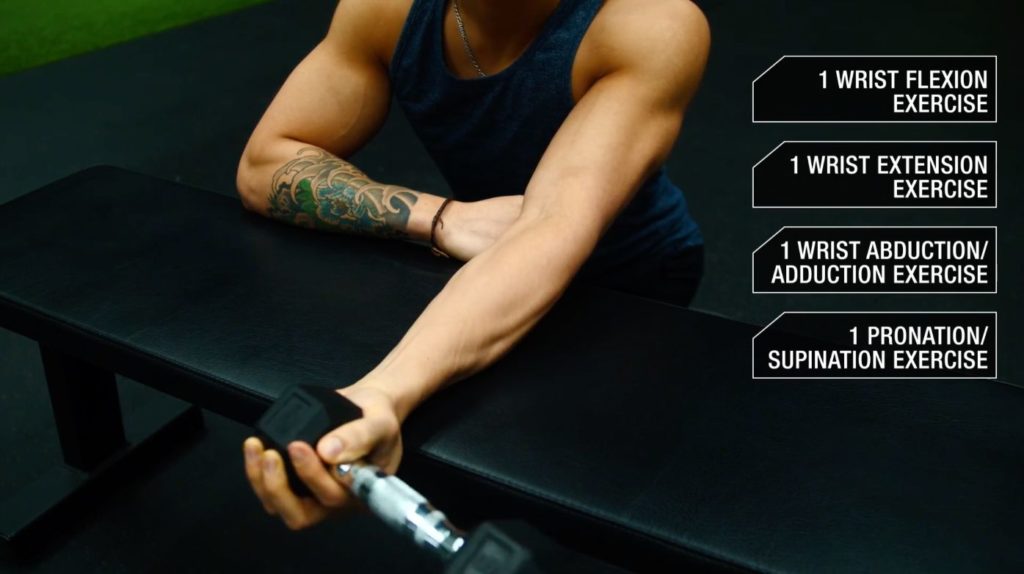 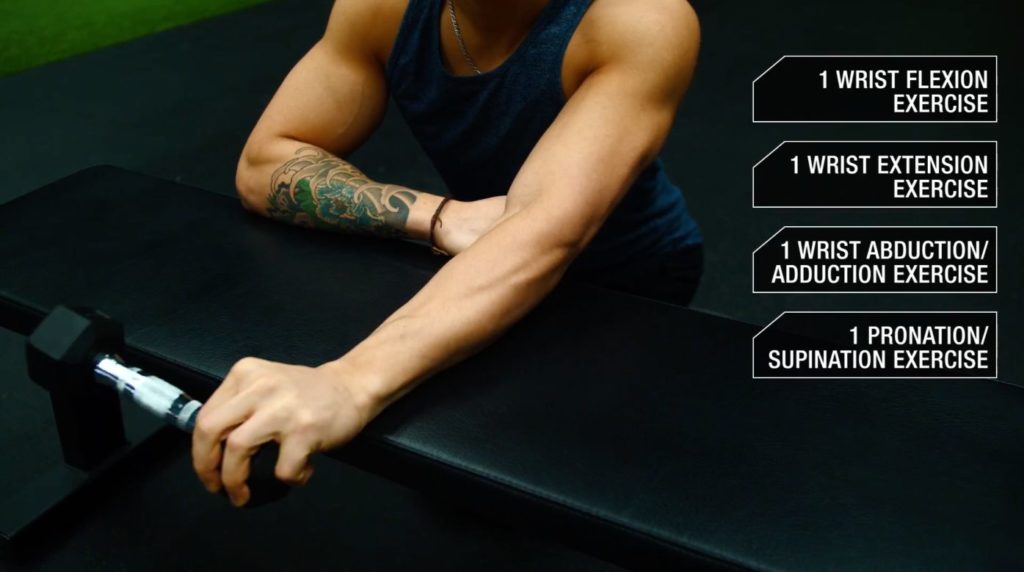 Again, gradually progress with heavier weight as your strength improves.

But by incorporating these 5 different categories of forearm exercises, you’ll now be able to effectively target all of the forearm muscles. And thus grow your forearms to a much greater degree than you would’ve otherwise.

Now the last tip here with how to work out forearms has to do with how exactly you then go about adding your additional forearm exercises into your current regimen. And there’s a variety of viable ways to do this.

For instance, a 2017 paper compared the effect of adding in volume-matched additional forearm work with a low frequency of 3 times per week versus a higher frequency of 5 days per week. After 4 weeks, both groups experienced roughly a 9% increase in grip strength as well as a similar significant increase in forearm size. 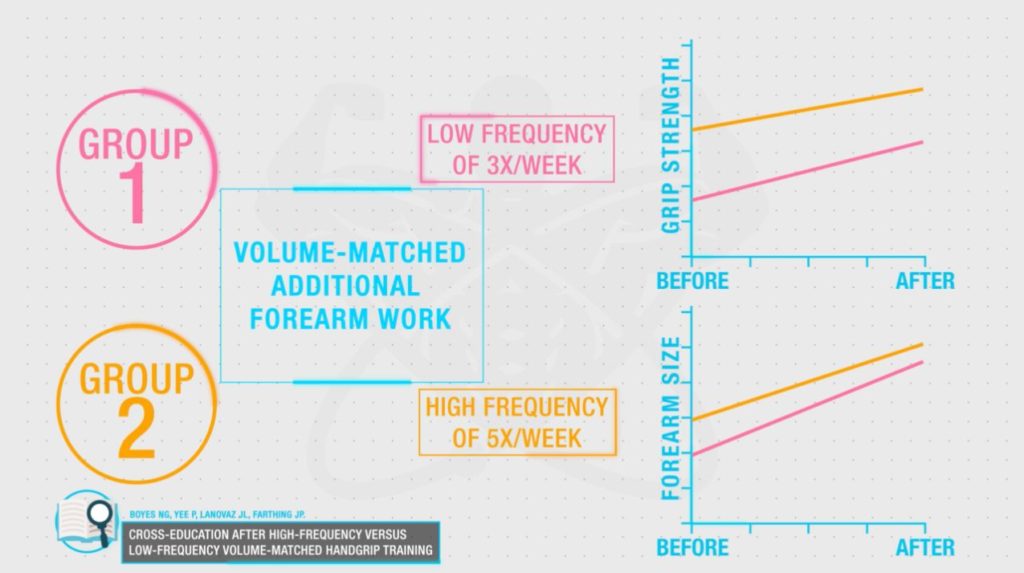 Meaning that you can choose whether you want to perform shorter yet more frequent sessions dedicated to your forearms or longer yet less frequent sessions. Both of which have their pros and cons. And does ultimately depend on your preferences as well as the type of split you’re running to prevent any forearm soreness from interfering with your main lifts.

So if you’re running a push/pull/legs split, for example, one good option could be to throw in 2 longer forearm sessions after each of your back or leg days. That’s because your legs and back will likely need a day or two to rest and we don’t want the soreness to carry over to your next push or pull workout.

How To Get Bigger Forearms: Takeaway

At the end of the day though, regardless of how you set it up, as long as you’re:

You’ll be able to very quickly and noticeably speed up your forearm growth as well as your overall grip strength. 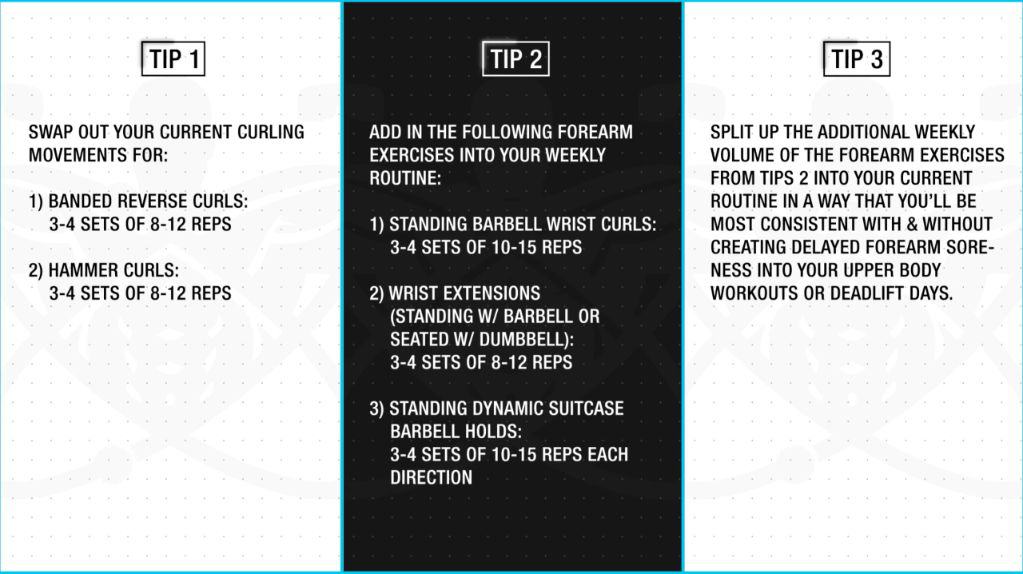 So, guys, I hope you were able to see that if you want to maximize and speed up growth in all of your muscles, not just your forearms, then it’s important that you don’t overlook crucial aspects of your program like your exercise selection, training volume, AND most importantly your nutrition. Otherwise, you simply won’t be building muscle as fast as you could be. And for a step-by-step science-based nutrition AND workout plan that puts this all together for you week by week so that you can build muscle and lean down as efficiently as possible with science, then:

How To Get Bigger Forearms FAST (3 Science-Based Tips) 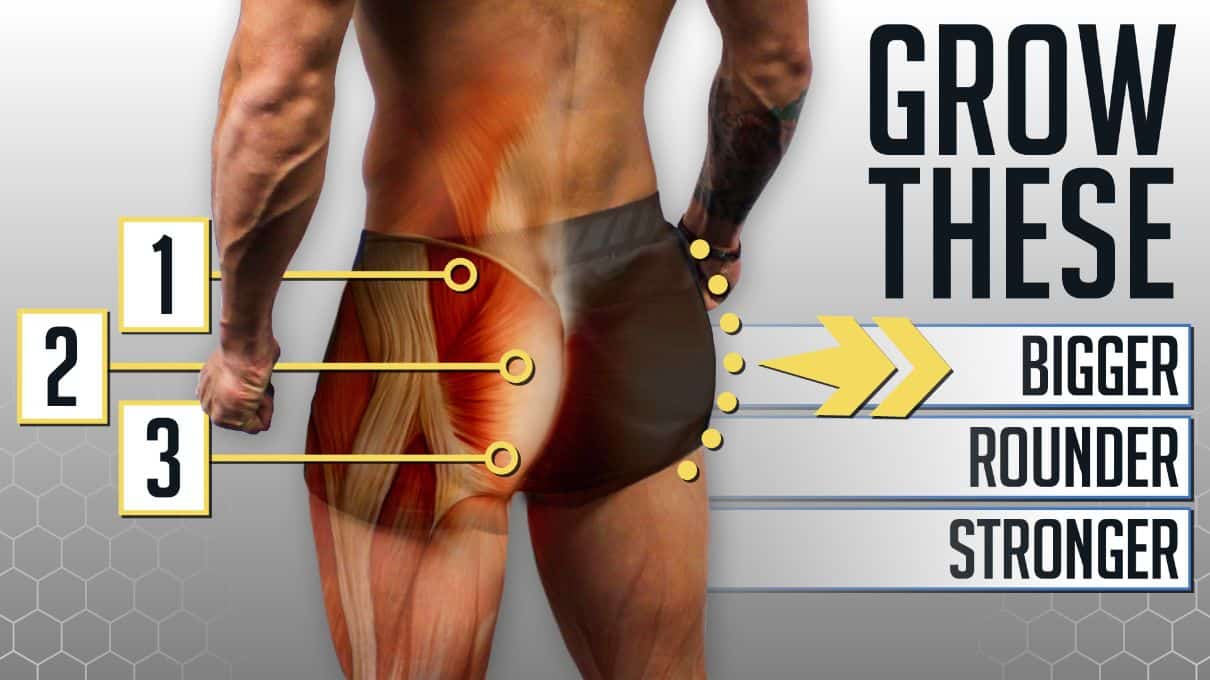