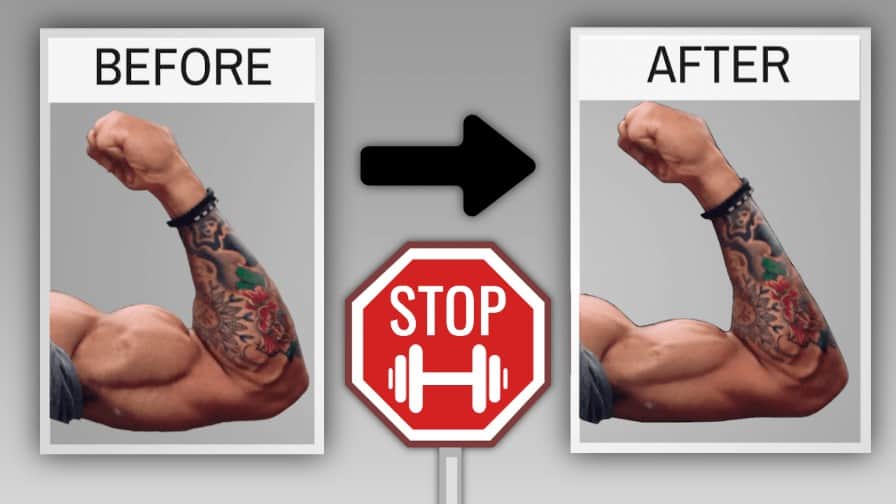 How Long Does It Take To Lose Muscle When You Stop Working Out? (And 3 Steps To Preventing It!)

If you’re planning to take some time off from lifting and are wondering how quickly you’ll lose your hard earned muscle…. Then you need to read this article.

For the majority of lifters, it’s likely that at some point you’ve had to take some time away from training. Whether it’s due injury, a vacation, or life just getting in the way. And it’s also likely that during this time off, you’ve been concerned about losing muscle and sabotaging all the recent progress you’ve been making in the gym.

But how fast do you ACTUALLY start to lose muscle mass?

How Fast Do You Lose Muscle?

For example, one 2013 literature review found that:

You can lose up to a kilogram of lean body mass in just a week when you’re fully immobilized.

And even when you’re not fully immobilized, research has shown an 11% decrease in type II muscle size in trained subjects after just 10 days of no exercise!

BUT – before you freak out – it’s important to note that this decrease in size is for the most part not due to actual muscle loss…. It’s instead due to a drop in glycogen levels and water stores within your muscle.

Glycogen and water levels within your muscles makes a significant difference in how big they appear. In fact, research shows that muscle glycogen can increase muscle volume by about 16%.

And since research also indicates that when you stop training, your muscle glycogen levels can drop by 20% after just one week…

…it means that your muscles will look considerably smaller after some time away from the gym – which is something you’ve probably noticed yourself.

But the good news is your muscle glycogen levels and water stores will quickly refill once you start training again.

In fact, one 2013 study from the University of Tokyo illustrates this idea perfectly:

They took two groups of subjects and had them train either:

Surprisingly, they found that both groups gained virtually the same amount of muscle by the end of the 24 weeks. The only major difference is illustrated below: 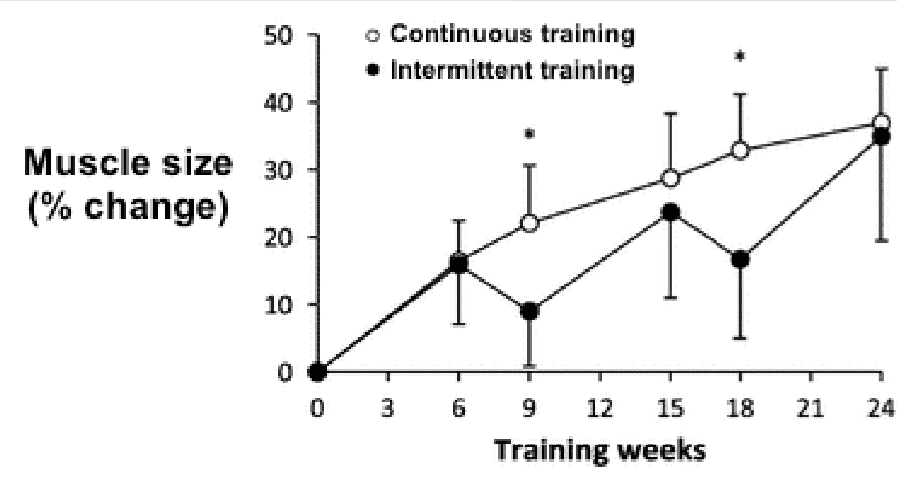 As you can see, the muscle size with the intermittent group fluctuated quite a bit due. This was due to increases and decreases in glycogen and water in the muscle corresponding to their on and off periods.

Taking a couple weeks off from lifting won’t cause any significant muscle loss, even though it may seem like it due to your glycogen and water fluctuations.

So When Do You Start To Lose Actual Muscle Mass?

Unfortunately, if you take enough time off the gym, then muscle loss becomes inevitable.

As shown in this 2013 literature review, after 3 weeks of no training is when you’ll indeed start to experience actual muscle and strength loss.

So if you are planning on taking extended time away from the gym or are just going to be very inconsistent with your training for a while, then muscle loss is something you should definitely be concerned about.

But luckily, there are a few things you can do to hold onto whatever gains you can.

How To Prevent Muscle Loss During A Layoff

Your body’s ability to maintain its muscle mass and current body composition is strongly affected by how much you eat. This is especially true in the event that you’re not training.

Although eating at a calorie surplus is normally helpful to build muscle, since you’re not actually training it’s simply going to result in excessive fat gain instead. 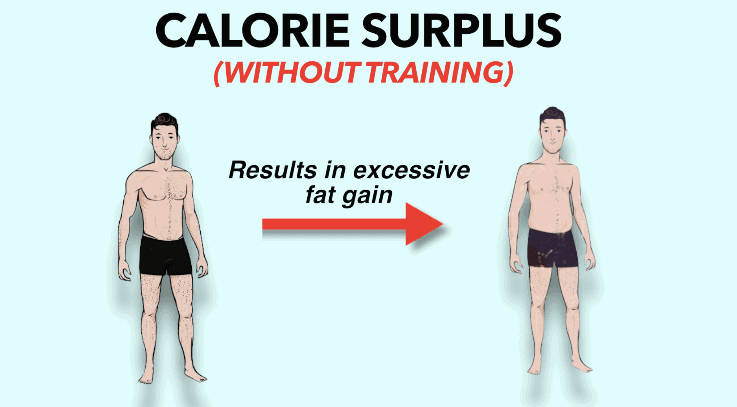 And on the other hand, eating at a calorie deficit is normally helpful to lose fat. But again, since you’re not actually training it’s going to contribute to increased muscle breakdown instead. 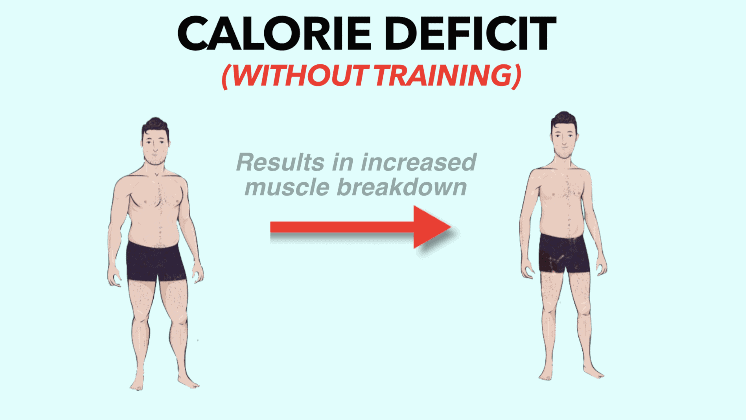 Thus, your best bet is to eat enough to just maintain your weight.

And research is in agreement with this.

For example, this 2013 literature review analyzed the effect of eating at a calorie deficit, maintenance calories, or a calorie surplus for muscle mass retention in subjects taking a break from training.

As expected, they found that a calorie deficit led to the greatest amount of muscle loss.

But what’s interesting is that they found that eating at a calorie surplus actually led to not only fat gain but also increased the rate of muscle loss. Which they speculated was due to a variety of processes (e.g. inflammatory responses) that occur indirectly from the fat gain.

The findings are illustrated in the below graphic: 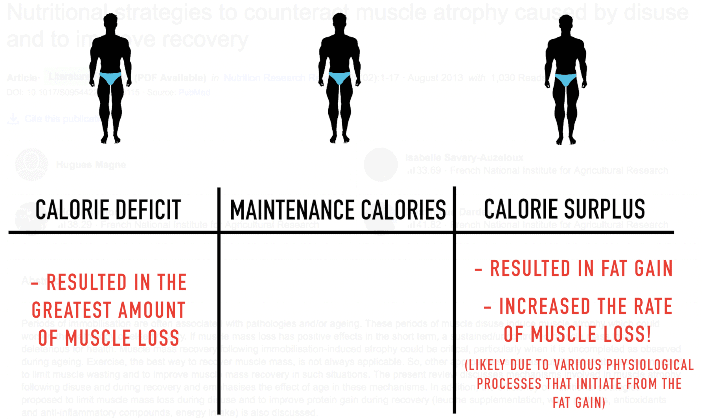 So again, as suggested by the researchers, simply stick to maintenance calories.

And to quickly get a rough estimate of what that is for you, I’d recommend multiplying your current bodyweight in lbs by 15 and sticking with that while monitoring your weight overtime.

So for example, for a 170lb individual, their calculation would look like this:

Now your next priority should be to ensure that you’re eating enough protein everyday, since as expected, research suggests that:

Maintaining a high protein intake during a period of no training helps minimize muscle loss.

Now as for the exact amount, we know that sticking to a protein intake of roughly 0.73-1g/lb of bodyweight is sufficient.

But just to be safe in your case, sticking to the higher end of this range would likely be your best bet to maintain as much muscle mass as possible.

Lastly, it’s important to realize that strength training isn’t the only kind of exercise that can maintain muscle mass.

Simple activities like brisk walking, light swimming, or doing chores for example is enough stimulus to help you maintain your muscle better than you would if you were completely sedentary.

And in addition, during your time off if you are able to make it to the gym at all, multiple studies have indicated you actually don’t need to do much in order to maintain your muscle mass.

For example, this 2011 paper found that you only need around 1/3rd of your original training volume to maintain muscle mass.

Similarly, this 2018 paper by Schoenfeld and colleagues had subjects perform the following 13 minute workout just three times a week: 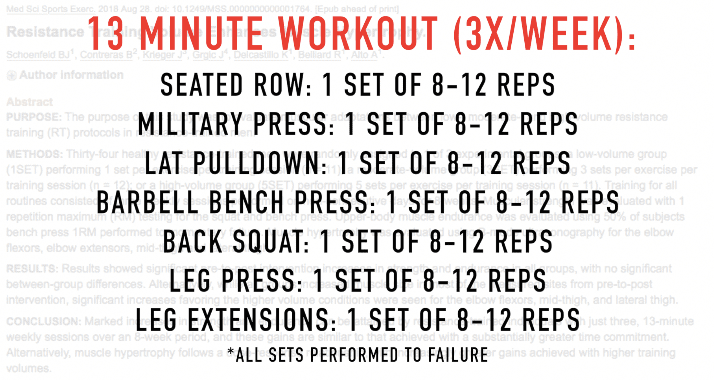 The researchers found that the subjects were able to maintain, and even slightly increase their muscle mass throughout a period of 8 weeks!

Simply meaning that anything is better than nothing. So if you have the time/ability to make it to the gym for one full body workout per week or multiple shorter full body workouts per week then you should definitely do so. Because this, in conjunction with the previous tips mentioned, will more than likely be enough for you to maintain your muscle mass.

Don’t Try To Train Through Your Injury!

If you’re unable to workout at all due to injury or whatever reason, don’t stress out about it and definitely don’t try to train through your injury! As this often just worsens it and makes it take much longer to fully recover from.

And besides, muscle memory is a very powerful, proven phenomenon. Meaning that any muscle and strength you do lose will be very quickly regained once you get back to your regular routine.

But that’s pretty much it for this article. As always, let me know in the comments below if you have any questions/concerns I can help you with. And I’d appreciate it if you gave me a follow on Instagram , Facebook , and Youtube where I’ll be posting informative content on a more regular basis.

How Long Does It Take To Lose Muscle When You Stop Working Out? (And 3 Steps To Preventing It!)

13 thoughts on “How Long Does It Take To Lose Muscle When You Stop Working Out? (And 3 Steps To Preventing It!)”