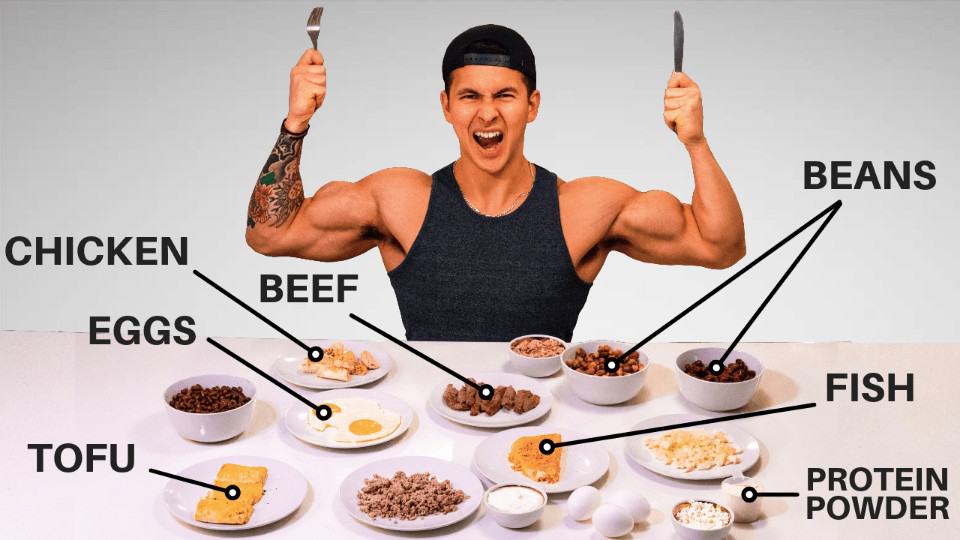 What Are The BEST Sources of Protein to Build Muscle? (11 Studies)

If you want to learn what science says are the best protein sources to build muscle… Then you need to read this article.

We all know that protein plays a major role in muscle growth.

Failing to get enough protein means that your muscles won’t recover and grow to the best of their ability.

However, getting enough protein shouldn’t be your only priority.

It’s vital that you also take into account the protein sources that you’re getting your protein from, as you want to ensure they’re high quality protein sources.

Because not all protein sources are equal in their ability to support muscle growth.

And as you’ll see in this article, choosing the right protein foods can enable you to maximize muscle growth and optimize your recovery and performance.

But before we dive into what the best protein sources are, let’s first take a look at what makes a protein source “good” in the first place.

What Makes A Protein Source “Good”?

Generally, there’s two main factors that determine the quality of a protein source:

So based on the above criteria, let’s now take a look at what protein sources come out on top.

What Are Good Sources of Protein?

And as explained in this extensive literature review from the Journal of Nutrition, there’s two reasons for this:

So clearly, based on the criteria I discussed earlier, we can see that animal-based protein sources are the better option for muscle growth.

BUT –  to be clear this does not mean that you can’t maximize growth if you only ingest plant-based proteins!  You can, and many vegans/vegetarians have successfully done so. However, in order to do so, there’s a few things you’ll have to implement which I’ll cover later in this article.

For now, let’s take a look at the various animal-based protein sources and determine what might be best.

What Are The Best Animal-Based Protein Sources?

Based solely on the criteria I mentioned earlier, Whey protein powder comes out on top.

It’s been shown in multiple papers to have both the highest leucine content and the highest digestibility when compared various other protein sources.

And since research also indicates that most individuals need roughly 2.5g of leucine in a meal to maximize protein synthesis, it makes it a very practical and calorie wise option of doing so. For instance, one scoop of a high quality Whey protein powder will provide you with a little over 2.5g of leucine for often just over 100 calories.

However, you don’t just want to rely exclusively on Whey as your main protein source. Nor would you want to rely on it too heavily in order to hit your daily protein requirements.

Because if you did, you’d be missing out on the various micronutrients that other protein sources. And these  micronutrients play an important role in your recovery, performance and can perhaps even augment muscle growth!

The Importance of Micronutrients in High Protein Foods

Lately there’s been a few novel findings indicating the importance of micronutrients within protein rich foods.

For instance, what’s really interesting is that recent research has indicated that:

Illustrating this, one 2017 paper compared the protein synthesis response between roughly 20g of protein from egg whites versus roughly 20g of protein from whole eggs. They found that the whole eggs elicited a protein synthesis response significantly higher than the egg whites. And the researchers stated that could not be attributed to the differences in caloric intake… 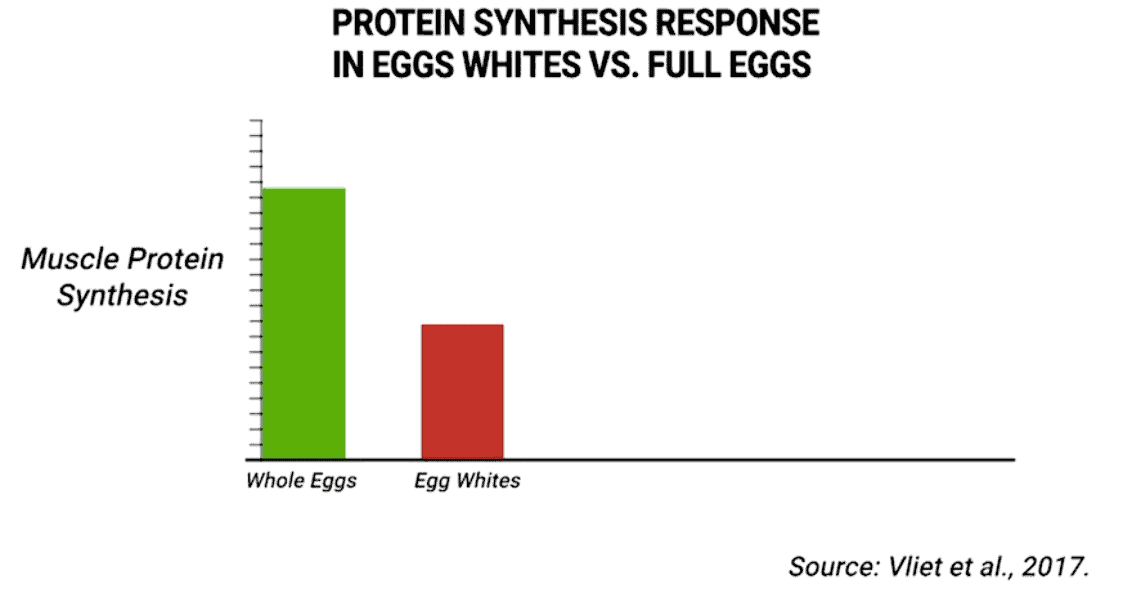 ….but rather was likely because the yolk in whole eggs contains several micronutrients that are potential candidates to augment the protein synthesis response.

Although this is a relatively novel finding, the results of other recent studies are in support of this idea as well (one, two). Thus displaying the potential importance of micronutrients for recovery and growth.

So what I’d recommend is stick to whey for your pre- and/or post-workout meal given its convenience and superior digestibility properties. But don’t rely on it excessively throughout the day as its lacking in micronutrients.

Instead, it’s a good idea to incorporate some of the following high quality whole food protein sources as well:

These are all excellent protein sources that each have a rich composition of essential amino acids and different micronutrients that have been widely supported by the literature to support muscle growth. So you’ll want to incorporate a variety of these into your science based diet.

In addition, slower digesting protein sources such as casein protein powder and protein rich foods high in casein (dairy products such as greek yogurt and cottage cheese) are worth discussing as well.

Generally, fast digesting proteins are preferred during the day when there’s not a very long break between meals.

Thus, to maximize growth, it may be wise to strategically ingesting a high amount (~40g) of a slow digesting protein either: 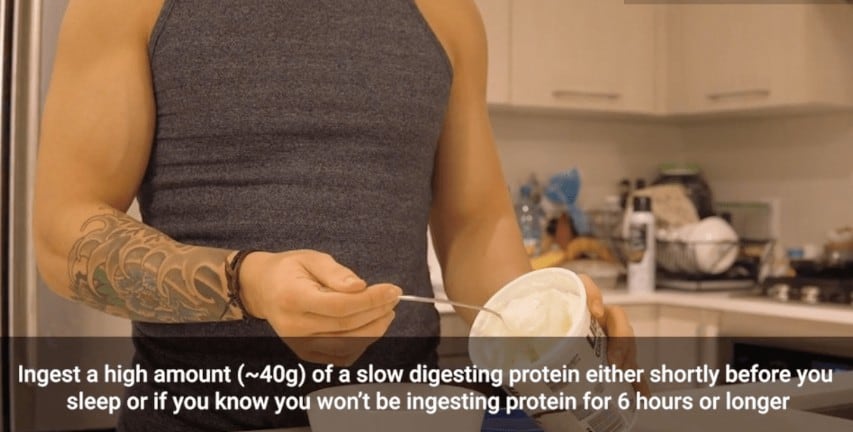 And the best casein-rich sources of protein to utilize for this reason are:

This is simply because they’re all high in protein and quite low in fat given that you choose the “low fat” options.

What About Plant-Based Protein Sources?

Now although plant-based protein sources are essential for vegans and vegetarians, I’d recommend everyone aim to incorporate them as well. This is for both sustainability and the additional fiber, micronutrients, and various phytochemicals that they provide.

…but there are ways to compensate for this.

For instance, as shown in the 2019 review, 20g of a plant-based protein often doesn’t elicit an adequate protein synthesis response. 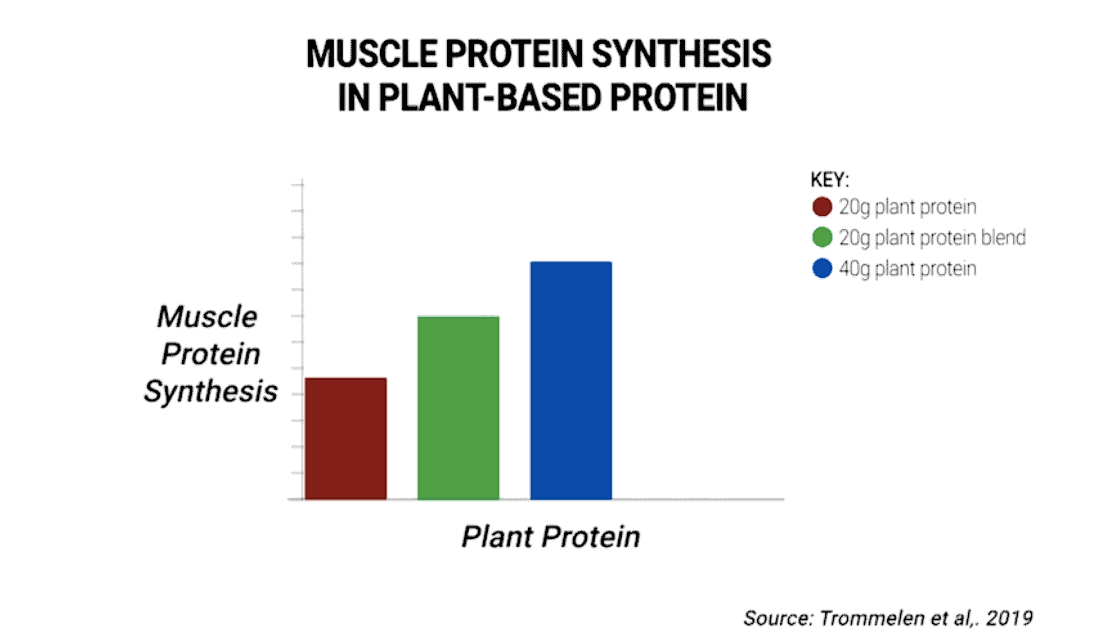 Therefore, with plant-based protein sources, it’s a good idea to ingest a greater amount at a time AND/or mix different sources within the meal or throughout the day to optimize the protein synthesis response.

And for your reference, here are various plant-based protein sources you can incorporate that are relatively high in protein and rich in the various essential amino acids:

So to sum the video up, here are the main points that you want to keep in mind: 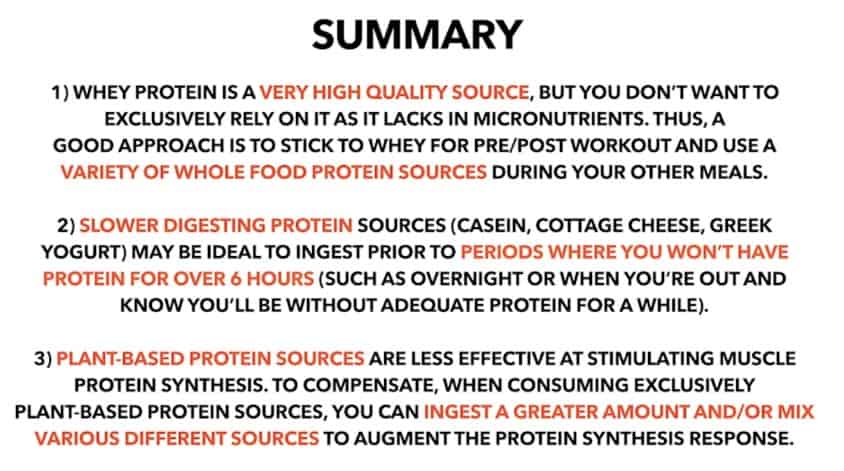 Just note that at the end of the day, total protein intake is what’s most important for supporting muscle growth. But, at the same time, you want to also pay close attention to the quality of the protein you’re ingesting for the reasons previously discussed.

And as I’ve said in the past, your nutrition will hands down be the most important factor when it comes to transforming your body. I used to be completely lost as to how to approach my nutrition and I know a lot of you out there are as well. This is exactly why within my Built With Science programs, I not only cover training but also stress the importance of nutrition. In fact, I even developed a custom built nutrition software designed to optimize your diet based on your own stats and goal.

Then simply take the start-point identification quiz below which will determine what program is best for you:

What Are The BEST Sources of Protein to Build Muscle? (11 Studies)

2 thoughts on “What Are The BEST Sources of Protein to Build Muscle? (11 Studies)”