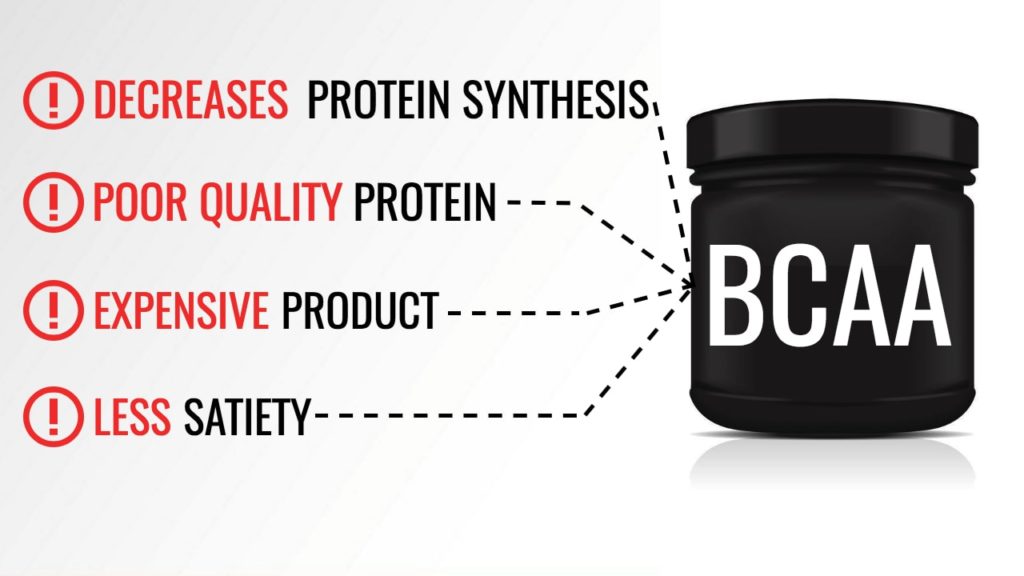 The TRUTH About BCAA’s and Muscle Growth (10 Studies)

If you want to know the REAL truth about BCAA’s and their “benefits”, then you need to read this article.

The global market for supplements is huge. It’s predicted to hit 45 billion by 2022. But with each supplement sold comes the many benefits its promised to deliver. And as shown in my how to take creatine article, some supplements actually do hold true to their promises whereas others simply take advantage of the misinformed.

One very popular supplement, branched chain amino acids (or BCAA’s), has grown into a multi-million dollar industry based on the concept that they create an anabolic environment for muscle growth. Take a look at any popular supplement company’s website and you’ll very likely find a sales page of them preaching the many benefits of BCAA’s and why you should buy theirs.

They’re also something that I personally used for years with the belief that it would help with my muscle recovery and help preserve my muscle during a cut – especially during fasted workouts.

But do BCAA’s actually hold true to their promise? Well in order to find out, we need to first understand the concept behind them.

What Are BCAA’s and How Do BCAA’s Work?

Amino acids are basically the building blocks of protein and muscle. There’s a total of 22 different amino acids, with 9 of them being classified as essential amino acids – simply meaning that our body can’t produce them and we have to ingest them through various protein sources.

Now research has shown that three of these 9 essential amino acids are particularly effective at increasing protein synthesis and can thus be viewed as the more important amino acids for muscle growth. These 3 amino acids (leucine, isoleucine, and valine) are exactly what make up the supplement BCAA’s. So technically, BCAA’s are just like any other complete protein (Whey, eggs, etc.) but with only 3 of the 9 amino acids.

The theory is that increasing our uptake of these 3 amino acids should theoretically lead to better muscle growth and prevent muscle loss based on their effect on protein synthesis.

..why BCAA’s may not actually “work”

Based on the concept previously explained, BCAA’s should provide a benefit to muscle growth. However, tere’s a catch that seemed to be overlooked. Several studies have shown that in order to achieve muscle protein synthesis, you need all 9 of the essential amino acids present. NOT just the 3 that make up BCAA’s.

So theoretically, BCAA’s wouldn’t provide any benefit over other protein sources that have all 9 essential amino acids and are likely inferior to them. But.. let’s take a look at the evidence just to be sure.

What Does Research Say?

Theory is great and all, but what does actual research have to say?

Well, it definitely agrees with this idea.

In 2008, Katsanos and colleagues showed that muscle protein synthesis was greater after ingesting whey protein when compared to ingesting the same amounts of essential amino acids in isolated form.

In agreement with this, one 2017 study by Jackman and colleagues found that when male subjects ingested 5.6g of BCAA’s following their workout, the resulting protein synthesis response was only about 22%.

So it’s clear that BCAA’s are in fact inferior to other complete protein sources like Whey protein. Meaning that it would be more beneficial AND cheaper for you to use Whey instead.

And as stated by researcher Alan Aragon who’s done extensive research on the topic:

“You’ll get several other beneficial compounds within whey that are missing from isolated BCAA’s (lactoferrin, immunoglobins, lactoperoxidase, glycomacropeptide) AND Whey will likely provide greater satiety than just taking BCAA’s.”

What About BCAA’s During Intermittent Fasting (Fasted Training)?

But with that being said, what about using BCAA’s for fasted training in order to prevent muscle loss?

Well, this is where it gets really interesting.

As I mentioned earlier, if BCAA’s are taken alone then you only get 3 of the 9 essential amino acids. And when you’re in a fasted state, the only source for the other 6 is from breaking down your muscle tissue. 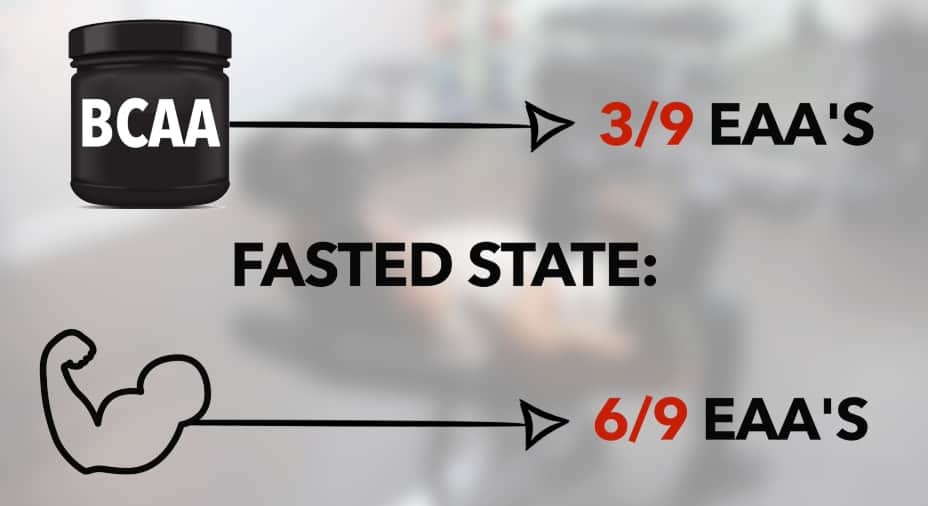 So as expected, recent research from the International Society of Sports Nutrition found that when taking BCAA’s in isolation, it actually:

Which is all the opposite effect of what you’re looking for, and is thus not ideal to use when fasting.

So what can you do instead?

Well, fasted training doesn’t seem to cause muscle loss in the first place as long as your daily protein intake is sufficient. And this holds true for both fasted cardio and fasted weightlifting. 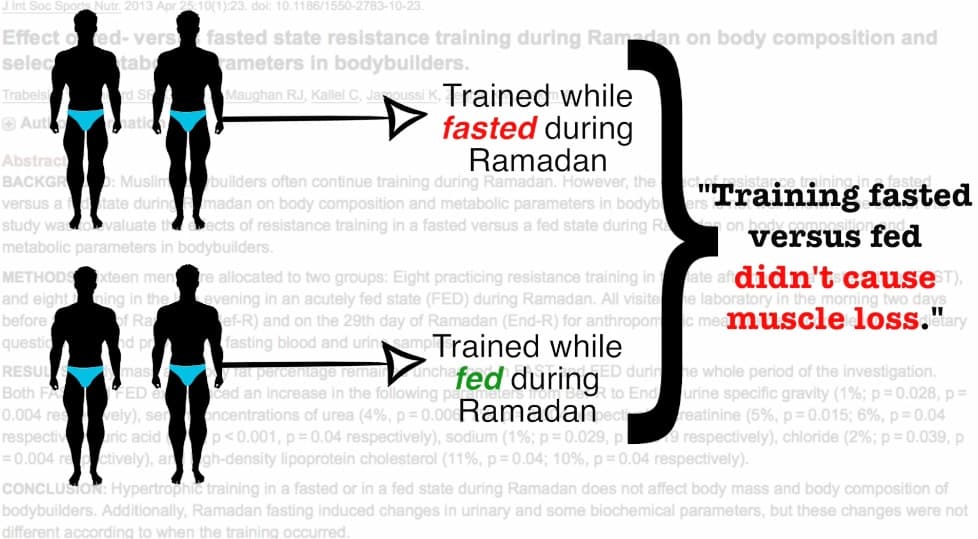 But in the event that your strength suffers when weight training in a fasted state, I’d suggest taking a scoop of Whey protein or having a small protein rich meal before your workout instead of BCAA’s.

Although this will break your fast, many people are unaware that BCAA’s do contain calories and will break your fast due to the insulin response it elicits. Just like any other protein, they contain ~4kcal/g which is roughly 40 calories for a typical 10g serving of BCAA’s. The reason why some labels show BCAA’s as “0 calories” has to do with the FDA regulations – they don’t view individual amino acids as containing calories, which just isn’t true.

So if you’re going to break your fast anyways, you’re better off sticking to a complete protein source!

For the most part, I think it’s safe to say that BCAA’s are for the most part useless. The various studies showing they improved lean body mass were heavily flawed and often funded by supplement companies. And the studies showing that BCAA’s help with muscle soreness are legitimate but are always compared to a non-protein placebo (meaning the results don’t really hold any value).

The only case BCAA’s might provide some benefit is with vegans who struggle to intake adequate amounts of the branched chain amino acids (isoleucine, leucine, and valine) through food alone. But in this case, I’d suggest taking BCAA’s with another protein source to avoid the negatives I discussed earlier.

Another possible benefit is that if you’re in the habit of taking BCAA’s and find it helps with your mental focus or you just genuinely enjoy the product, then that’s perfectly fine – the placebo effect can be very beneficial! However, I’d again advise taking it with another protein source (e.g. whey protein before the gym then BCAA’s during your workout).

In fact, one 2013 study from the American Journal of Clinical Nutrition found that “the addition of 5g of BCAA’s to a beverage containing 6.25 g whey protein increased muscle protein synthesis to a level comparable to that induced by 25 g of whey protein.” Meaning that there’s likely a synergistic effect of taking BCAA’s with Whey – but this is still unclear and will depend on the quantity of BCAA’s that are already present in your Whey protein. So if you’re going to continue using BCAA’s, take it with Whey or at least shortly before or after ingesting Whey (or any protein source)!

That’s pretty much it for this article. I hope you all enjoyed it and I hope it opened your eyes up to some of the misconceptions that the supplement industry loves to create. Although I used to be a proponent of BCAA’s, I think that part of being an evidence-based fitness professional is being open to new evidence which often means changing/challenging your own biases and beliefs. And I’ve done just that regarding my stance with BCAA’s.

On that note, I’m planning to do an in-depth analysis similar to this one on various other supplements. So let me know in the comments below what you’d like to see me review! In the meantime, stay updated by giving me a follow on Instagram , Facebook , and Youtube! Cheers!

The TRUTH About BCAA’s and Muscle Growth (10 Studies)