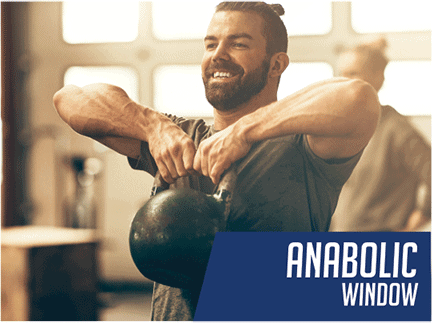 The Anabolic Window: How To Optimize It For Growth (IT MATTERS!)

In this article, I explain what the anabolic window is, and how you can optimize your post-workout nutrition for muscle growth.

One of the first tips you learn in the gym is the importance of the anabolic window. Also known as post-workout nutrition.

And the rationale? Well, it’s the idea that if you didn’t fuel your body with protein and carbs right after training, you’d miss a crucial opportunity to accelerate your muscle growth and recovery. And your muscles would go catabolic and slowly waste away.

This idea was enough for me to obsess over this anabolic window. And I ensured that I had a post-workout meal, drink (protein shake), or snack handy after every single workout without fail. Chances are, probably many of you have obsessed over the anabolic window as well.

Since then, yes plenty of gains were made. But research methods have also drastically improved. And we’re now armed with better information with regards to the anabolic window. And how important it really is for muscle growth.

The Theory Behind The Anabolic Window

Of course, we’ll dive into that research in a bit. But first, let’s take a look at the theory behind why the anabolic window is thought to be so important in the first place.

And it’s what happens to these two processes after we work out where the anabolic window comes into the picture.

Because research has shown that after a workout, your muscles:

And it’s been shown that the longer you go without eating an adequate post-workout after your workout, the more your protein breakdown rates will continue to increase. This eventually reaches the point where they exceed your protein synthesis rates. And hence create a catabolic state that promotes muscle loss instead of muscle growth! 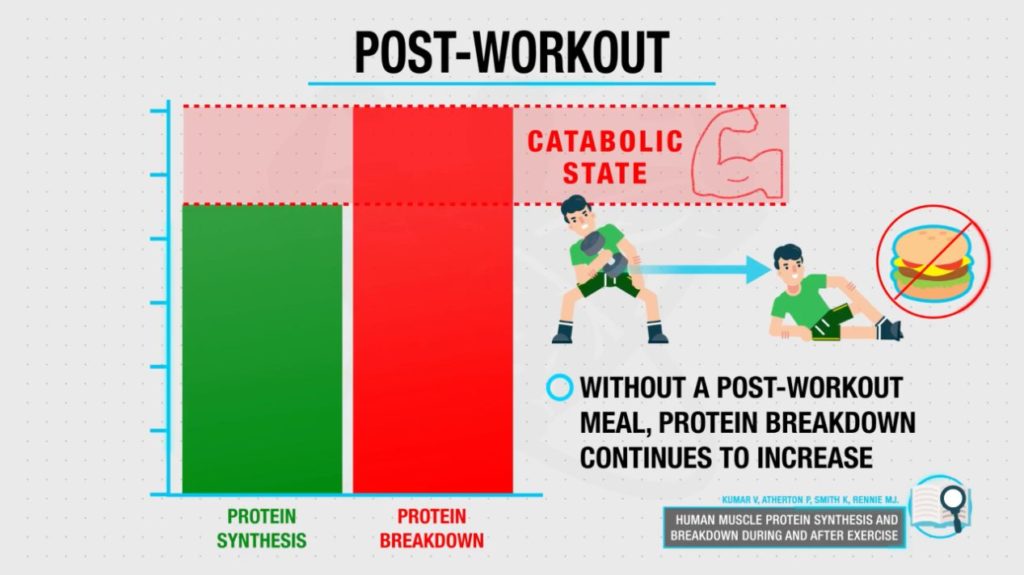 To prevent ever reaching this point and to instead stay in an anabolic state after your workout to support muscle growth, you can simply ingest a protein-rich post-workout meal or shake shortly after. Doing so has been shown to: 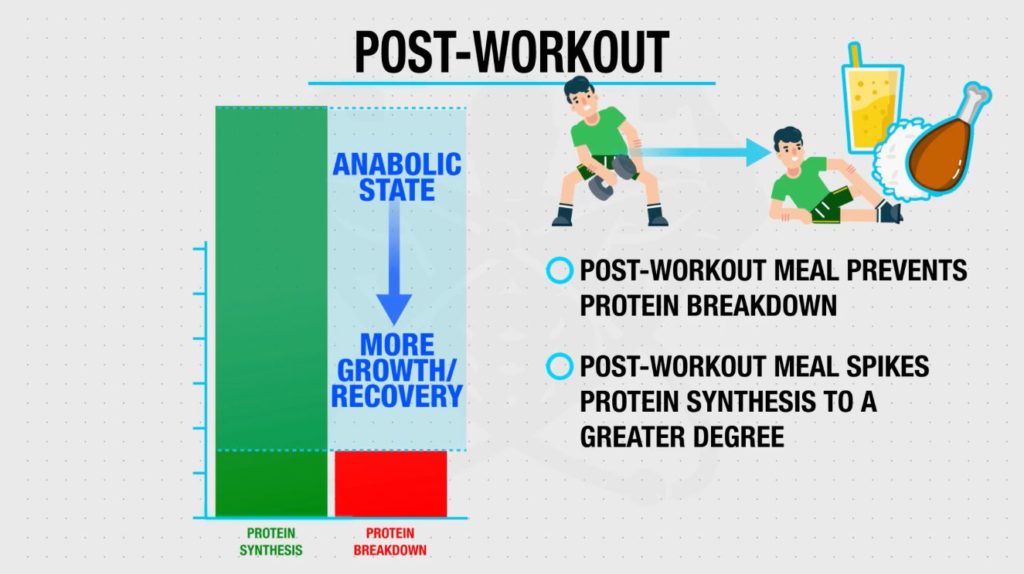 And, to add to this, after your workout your muscles are also now highly sensitized to carbs as well. Research shows that when carbs are consumed shortly post-workout, you experience a super-compensation of glycogen replenishment in your muscles. This is in stark contrast to the case where you delay carbs by just 2 hours, which reduces the rate of muscle glycogen re-synthesis by as much as 50%.

And this glycogen re-synthesis is obviously important. Why? Well, because we used some of this muscle glycogen for energy in our workout. And we now want to replenish our muscles with glycogen as much as possible. Doing so will help improve our performance in our next workout.

And so, you can see how theoretically this would all lead to more growth and better recovery. This is why we’ve been led to believe in the importance of hitting that anabolic window after every workout.

But, it turns out that there’s a catch.

There Are Flaws In The Theory Of The Anabolic Window

As there are a few flaws in the above argument. These flaws were only brought about recently in new research. Let’s take a look at each of them.

Flaw 1: Based On Findings Of Fasted Training

This theory was based on the findings of fasted training. This is where subjects did not eat anything prior to their workout and instead worked out first thing in the morning.

When you have a meal consisting of protein sometime before your workout though, things change.

First of all, let’s address protein synthesis. Multiple papers (here, here) have now shown that although your muscles are in theory more sensitized to protein after your workout, if you have protein before your workout rather than after, you’re still able to boost protein synthesis to the same degree.

And in fact, some research has even shown that the protein synthesis response from your workout is even higher when you ingest protein before your workout as opposed to only immediately after your workout.

Flaw 2: Post-Workout Protein Breakdown Is Not A Concern If You’ve Ingested An Adequate Pre-workout Meal

And secondly, let’s address protein breakdown. Research does indicate that protein breakdown increases rapidly after your workout. And after approximately 3 hours, this does eventually lead to a catabolic state. This is where the muscle starts to breakdown.

However, this is only the case for fasted workouts. Because in the event that you’ve ingested an adequate pre-workout meal before your workout, then this no longer becomes a concern.

In fact, a paper by Power and colleagues found that a simple pre-workout meal consisting of just 45g of whey protein was enough to:

And, if you add carbs and fats to this meal, you can extend this anabolic state to even 4 to 6 hours depending on the size of that meal. 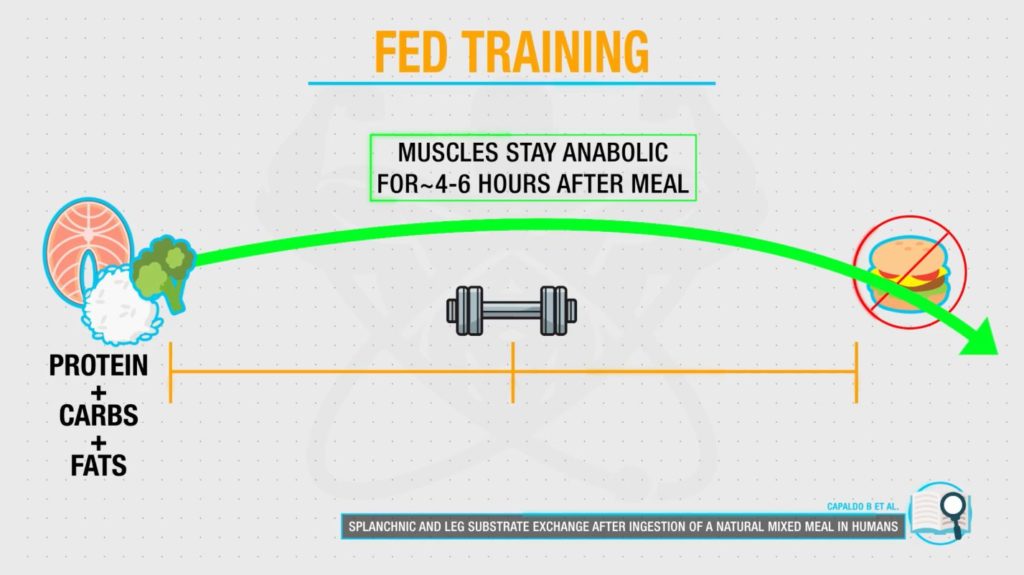 Flaw 3: Post-Workout Muscle Glycogen Replenishment Is Not That Big A Deal

Lastly, let’s address glycogen replenishment. Now, it is true that our muscles are highly sensitized to carbs after our workout. But research has also shown that as long as you eat enough carbs throughout the day, your body will eventually fill its glycogen stores back up. That’s regardless of whether you had them within your post-workout meal or not.

Meaning that ingesting carbs right after your workout seems to be only really beneficial if you have another workout later on that day. And you need to refuel your muscles sooner rather than later.

So in theory, it seems that as long as you’ve had a properly constructed and timed pre-workout meal, the anabolic window becomes irrelevant. Ingesting a post-workout meal or shake immediately after your workout wouldn’t provide:

And research that has now actually taken a look at muscle growth as opposed to just protein synthesis is in agreement with this.

For instance, a recent meta-analysis by Schoenfeld and colleagues took a look at a total of 23 nutrient timing studies. The paper found that when protein intake is controlled for, there doesn’t seem to be any significant benefit on hypertrophy regardless of whether individuals:

And if anything, the benefit in growth would be minimal.

That Said, The Anabolic Window May Be More Important For Experienced Lifters

However, when diving deeper into the research, it’s clear that the past studies I went through, including this meta-analysis, focused mostly on untrained individuals. And there’s something really interesting, too. Which is that if you take the time to read between the lines, research has actually indicated that post-workout timing and the anabolic window may become increasingly important as you gain more training experience.

Illustrating this is a 2014 paper. It compared the protein synthesis response in untrained lifters versus trained lifters with an average of 6 years of experience. So they had both groups ingest a pre-workout meal a few hours before the workout. And then after the workout delayed their post-workout meal for 6 hours.

When compared to the untrained individuals.

Meaning that theoretically, for the trained lifters, ingesting protein immediately post-workout would still be beneficial for growth. That’s even though they already had a pre-workout meal a few hours prior. Why? Well, because it would boost that diminished level of protein synthesis response they seem to experience.

Whereas for the untrained lifters, ingesting protein immediately after their workout wouldn’t be necessary. And would provide little to no benefit for growth so long as they get enough protein throughout the day. That’s because they already experience a near-maximal protein synthesis response from their workout alone that lasts for several hours after the session, 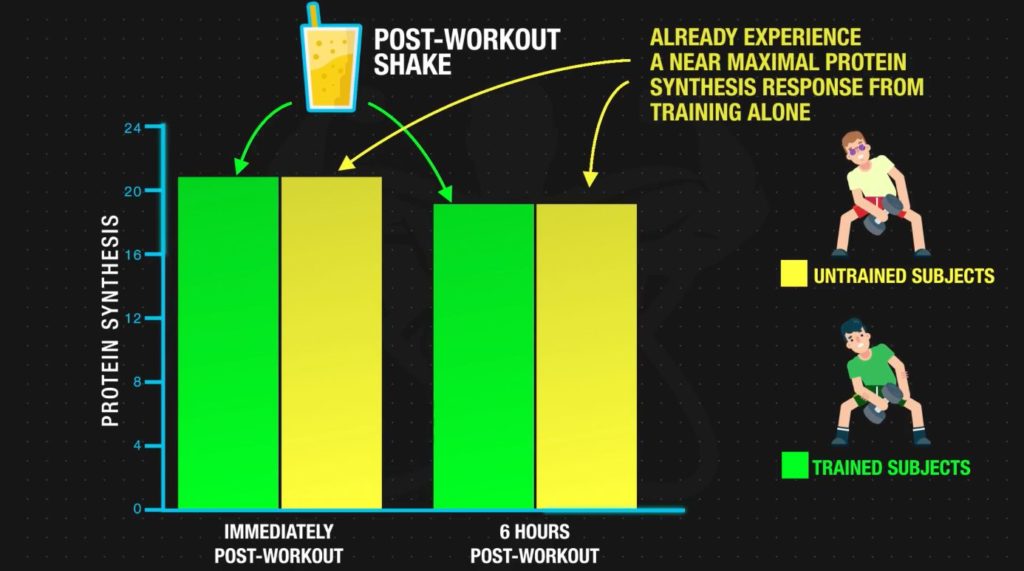 And this effect has also been shown in another study. Which had untrained subjects train just one of their legs using the leg extension machine for a period of 8 weeks and left the other leg untrained. After the 8 weeks, they then had both legs undergo the same leg workout. And what they found is that despite subjects being in a fed state during the workout, the trained leg of the subjects now exhibited a significantly lower protein synthesis response after the workout when compared to the leg that they left untrained.

As for whether this would result in additional muscle growth for trained lifters? Research is very limited in this regard. But there is a well designed recent 2017 paper that seems to support this theory. The researchers took trained men with at least 1 year of experience in the gym and split them into two groups. They wanted to determine whether or not post-workout protein would make a difference in muscle growth. To do so:

Both groups followed the same controlled diet and total daily protein intake. This study involved 10 weeks of working out 3 days a week. After which, the post-workout protein group managed to very slightly but non-significantly outperform the pre-workout protein group in terms of strength and muscle growth at the sites measured. With their biceps growth showing the greatest increase. And, as stated by the researchers, likely would have reached significance had the study lasted longer.

Admittedly, the benefits shown here were quite minimal. And indicates that post-workout protein isn’t as important as we once thought. But it does hint that it may become slightly more important for trained individuals. And, as a result, may in fact make a significant improvement in their rate of muscle growth and strength over time.

I know I’ve covered a lot and gone through a bunch of theories. But here’s a brief summary of how all of this research applies to you:

The timing of your post-workout meal isn’t as important as we once thought. But in the various scenarios that I’ve outlined here, it does become something that you should take seriously and may become increasingly important as you gain more experience in the gym.

And even if at the end of the day it provides just a slight benefit, it’s the little details like your protein timing that can all add up and end up making a significant difference in the rate of gains that you’re making. And for a step-by-step program that optimizes all of these little variables for you, by showing you exactly how to workout and when and what to eat every week in order to build muscle as efficiently as possible with science, then simply:

Hopefully, you now know how long to wait after workout out to eat. And what to eat in particular! Don’t forget to give me a follow and connect with me on Instagram, Facebook, and Youtube as well, in order to stay up to date with my content.

The Anabolic Window: How To Optimize It For Growth (IT MATTERS!)