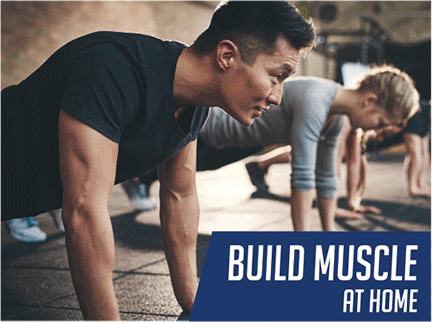 Should You Be Training To Failure? (AVOID THIS MISTAKE!)

When it comes to maximizing muscle growth in the gym, it’s commonly thought that the hardest worker in the gym is clearly going to get the most gains, right? Find out in this article.

If you have the ability, then surely pushing yourself to the limit (aka training to failure) to get that extra rep or two every set is going to lead to more muscle growth and strength. Right?

Admittedly, this thought does have some merit. But the truth is that in the case of how hard you should be training, it seems that training smarter instead of just training harder leads to better gains with less effort.

But just how hard should you be training to maximize growth?

Well to answer this question, let’s start with the theory behind being the hardest worker in the gym. Which typically involves taking every set of your workout to failure. Or, in other words, to the point where you simply can’t perform another full rep without compromising your form.

Is Training To Failure Good?

Training to failure is commonly thought as the best way to train for muscle growth for a few main reasons.

First is the idea of something called mechanical tension. Which we know is the main driver of muscle growth. To maximize mechanical tension and the resulting growth from each of your sets, you need to be able to recruit as many muscle fibres as possible during that set. 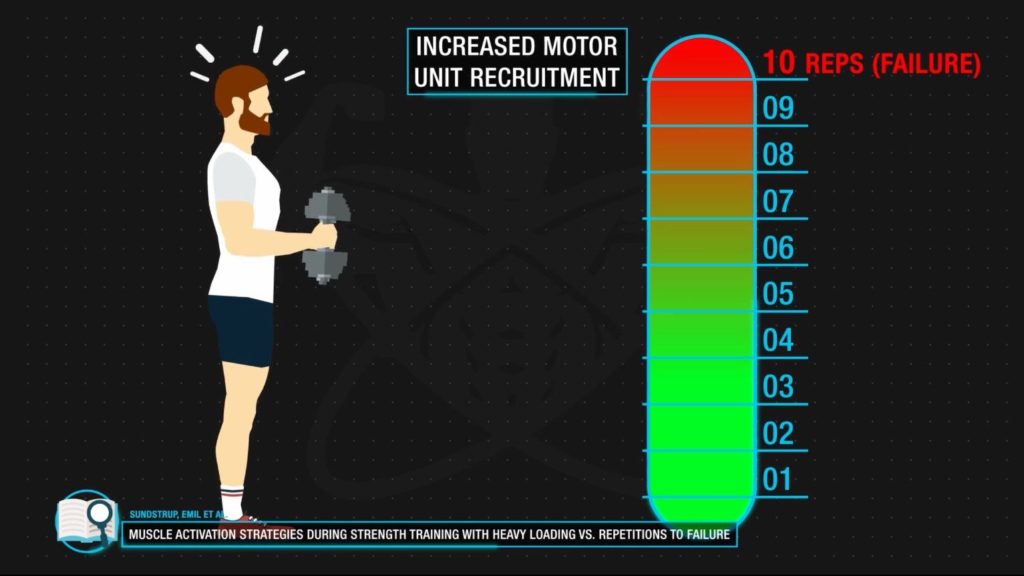 Second, similar to motor unit recruitment, muscle protein synthesis is lower when you don’t train very hard in your sets as opposed to when you go to failure. Which again would theoretically mean more growth when you train to failure given the importance of protein synthesis levels for growth.

Lastly, given the positive relationship we see between workout volume and muscle growth, it would seem that pushing each set to failure to get that extra rep or two would increase the overall workout volume you’re doing. And lead to more growth as a result.

So, it seems that training to failure is sure to be your best bet for maximizing growth, right?

Well, not so fast.

Training To Failure Comes With A Cost

The truth is that training to failure is unenjoyable for most. And requires a great deal of motivation to do every workout. In addition, it’s also very fatiguing on the body!

In fact, research has shown that training to failure causes excessive muscle damage. And extends your recovery time considerably. Subjects generally required roughly 24-48 hours longer for their performance to fully recover when training to failure as compared to stopping short of failure during each set. Which is problematic as this delays recovery. 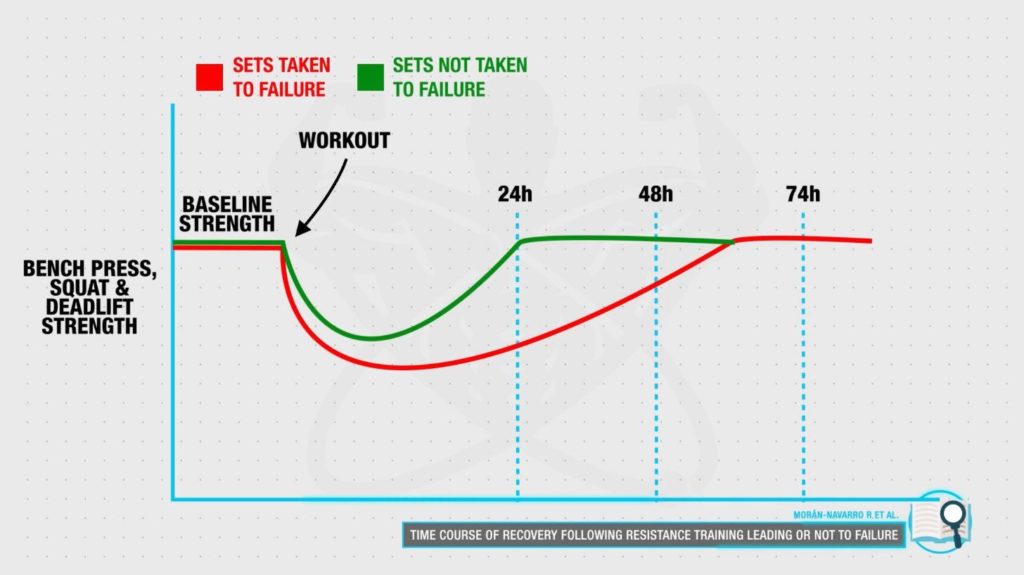 Also, muscle damage can easily carry over into your next workouts for the week. And, as a result, hinder your performance in those workouts.

Worryingly, research has shown that when this is done over long periods, it eventually can lead to a state of “overtraining.” This state results in a reduction in your anabolic hormones. And basically just creates an environment in your body that is detrimental to building muscle.

So given the various benefits and the potential downsides of pushing yourself to the limit and training to failure every workout, you’re probably still wondering just how hard should you train to maximize growth.

And well, it turns out that there is a sweet spot.

Taking A Closer Look At The Theory Behind Training To Failure

To figure out what exactly this sweet spot is, we need to go back and take a closer look at the theory behind training to failure to maximize growth.

First of all, motor unit recruitment and muscle activation do increase as you approach failure in a set. But as shown in the following graphs analyzing the shoulders and trapezius, it seems to plateau at around 3-5 reps shy from failure. 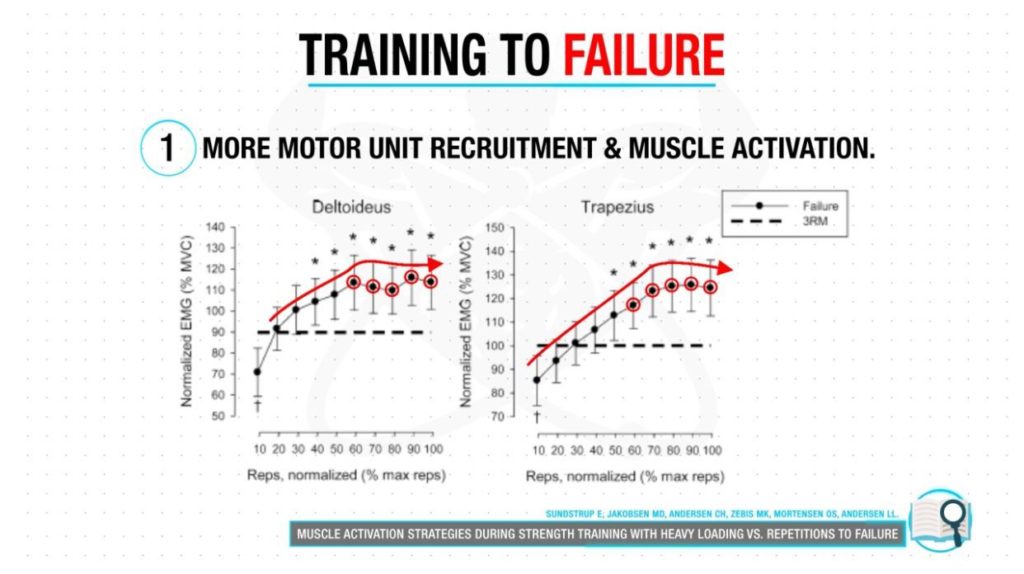 Let's say you know you can do 15 reps of lateral raises and not a single more before your form breaks down.

Accordingly, you should perform just 10-12 reps out of that 15. Leave a few reps in the tank. This would still be sufficient to pretty much maximize your motor unit recruitment.

Lastly, although you would think that training to failure would result in more volume since you’re pushing to get that extra rep or two each set, that actually isn’t the case. Research has shown that the muscular fatigue caused by going to failure in a set causes your performance to suffer in successive sets. And this leads to considerably fewer reps being performed in those next sets. 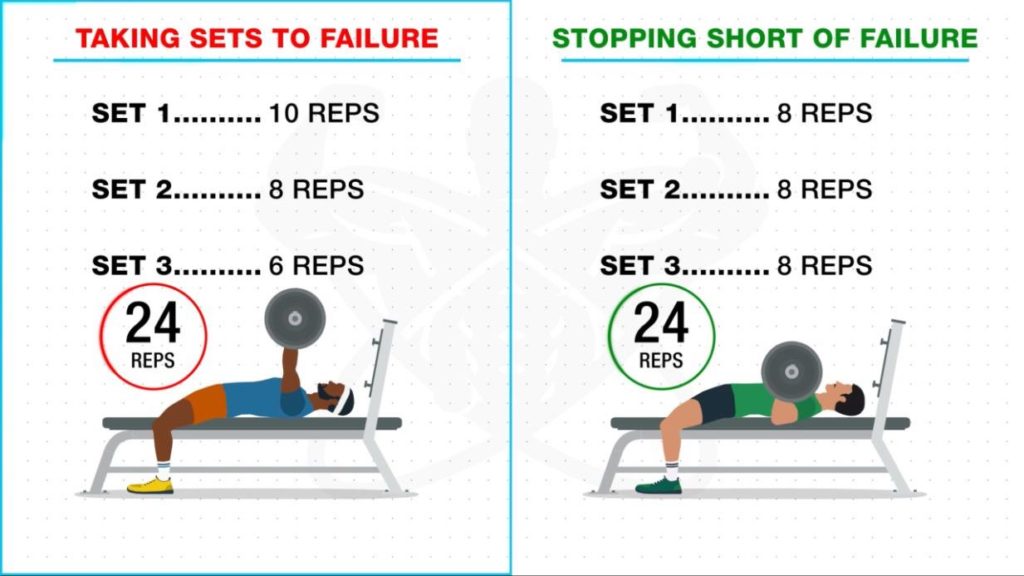 Leaving A Few Reps In The Tank Is Your Best Bet

But if you leave a few reps in the tank during your set, your performance in subsequent sets doesn’t suffer nearly as much. And you’re able to perform more reps during those latter sets. As a result, by the end of the workout, all of the subjects in the study ended up performing the same amount of volume. But those who trained to failure required a lot more effort to do.

Based on these findings, it seems that not training to failure by leaving roughly 1-3 sets in the tank is your best bet. Since this enables you to maximize your motor unit recruitment and workout volume. But with less effort and without compromising your recovery.

How To Train For Hypertrophy: Stop Short Of Training To Failure

What does the research say though?

The majority of research out there is in support of this. This is especially so with recent and well-designed papers. These papers (here, here, here) found that both:

Will lead to you experiencing the same amount of growth.

And probably the best evidence of this to date is a 2019 paper from the Journal of Strength and Conditioning Research. The researchers had 10 subjects perform the leg extension:

During each of their sets. After 14 weeks, the non-failure leg actually ended up seeing slightly better growth and strength when compared to the failure leg. That's despite both legs performing the same amount of volume! 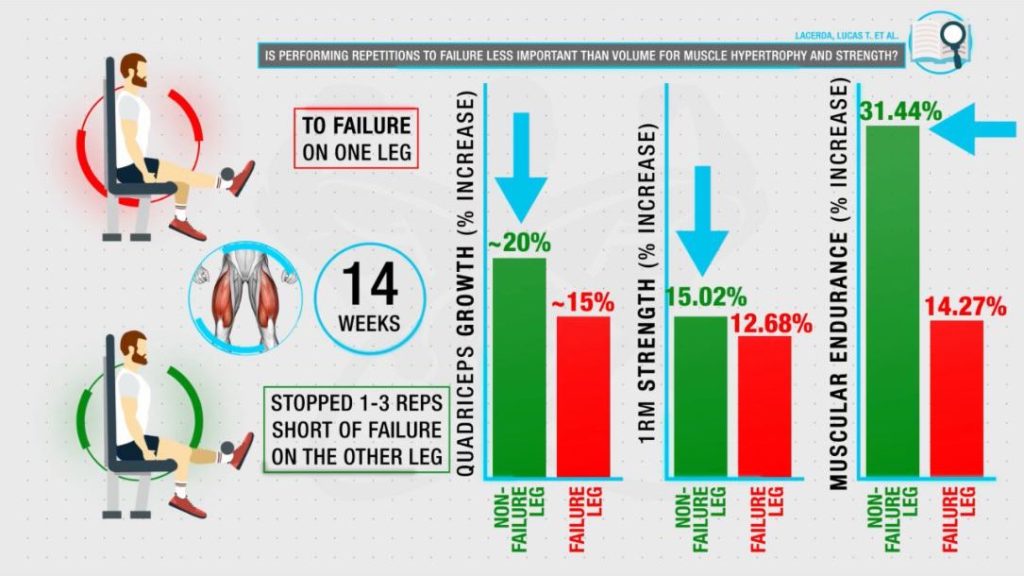 Suggesting that you may even reap slightly better gains when you leave a rep or two in the tank during your sets.

However, don't go too far to the other end of the spectrum. Research has shown that stopping well short of failure, so for example, stopping at 5 reps in a set when you could have done 10 reps to failure, is inferior for muscle growth.
Meaning that it’s crucial that you get close enough to failure during your sets to still maximize growth. And that doesn’t mean that your training becomes “easy” or a walk in the park. Because that’s not the case at all.

I mean, for example, let's say I do a set of curls and take a set to true, complete failure. Now, this is extremely taxing and fatiguing to do. Especially if it's the first thing I do in the morning. Even stopping 1-3 reps short of the very last rep is still a very demanding and hard set to do.

That said, most people underestimate the number of reps they can actually do to failure. And end up training too easy as a result.

How To Properly Estimate The Number Of Reps You Can Do

Your ability to predict how many reps you can actually do (all-out) in a set improves as you gain more experience.

So, if you’re relatively new in the gym and drastically underestimating what you’re capable of, this can be detrimental to your gains. Given the importance of pushing our sets close to true failure if we want to maximize growth.

What else can you do other than just gaining more experience, though? Well, another way you can ensure that you’re actually pushing hard enough during your sets is to dedicate a day where you use a spotter. Then, try to get as many reps as you can for each exercise during each set.

So let’s say for the bench press you managed to hit 10 reps, 8 reps, then 6 reps by taking each set to failure at a certain weight. What you can do is:

You can always adjust accordingly if that ends up being too tough or too easy. But you’ll want to use that number as the baseline to progress from. This is especially important as you get stronger and that becomes too easy.

Should You Be Training To Failure: Takeaway

Based on the research we have to date, it seems that leaving roughly 1-3 reps in the tank during each of your sets is the best way to maximize growth. Without accumulating excessive fatigue. And I’d argue that this is particularly important to implement for your big, compound movements because:

You can likely get away with doing isolation exercises sets closer to failure. Or even taking some of these sets to failure. That's because they’re less taxing. Of course, do so only if you’re still recovering well and incorporating deload weeks as needed.

But all in all, it’s clear that constantly pushing for that extra rep or two isn’t always a good thing. As it provides very little additional stimulation for the huge jump in fatigue that you get in return. So train hard. But if you want to see the best long-term results, you need to train smart as well. And for a step-by-step program that applies this and takes care of all the guesswork for you by showing you exactly how to optimally train AND eat week after week in order to build muscle as efficiently as possible with science, then:

I hope you enjoyed this article! Hopefully, you now know the answer to 'Should I train to failure?' Don’t forget to give me a follow and connect with me on Instagram, Facebook, and Youtube as well, in order to stay up to date with my content.

How Hard Should You Workout To Build Muscle? (AVOID THIS MISTAKE!)

Should You Be Training To Failure? (AVOID THIS MISTAKE!) 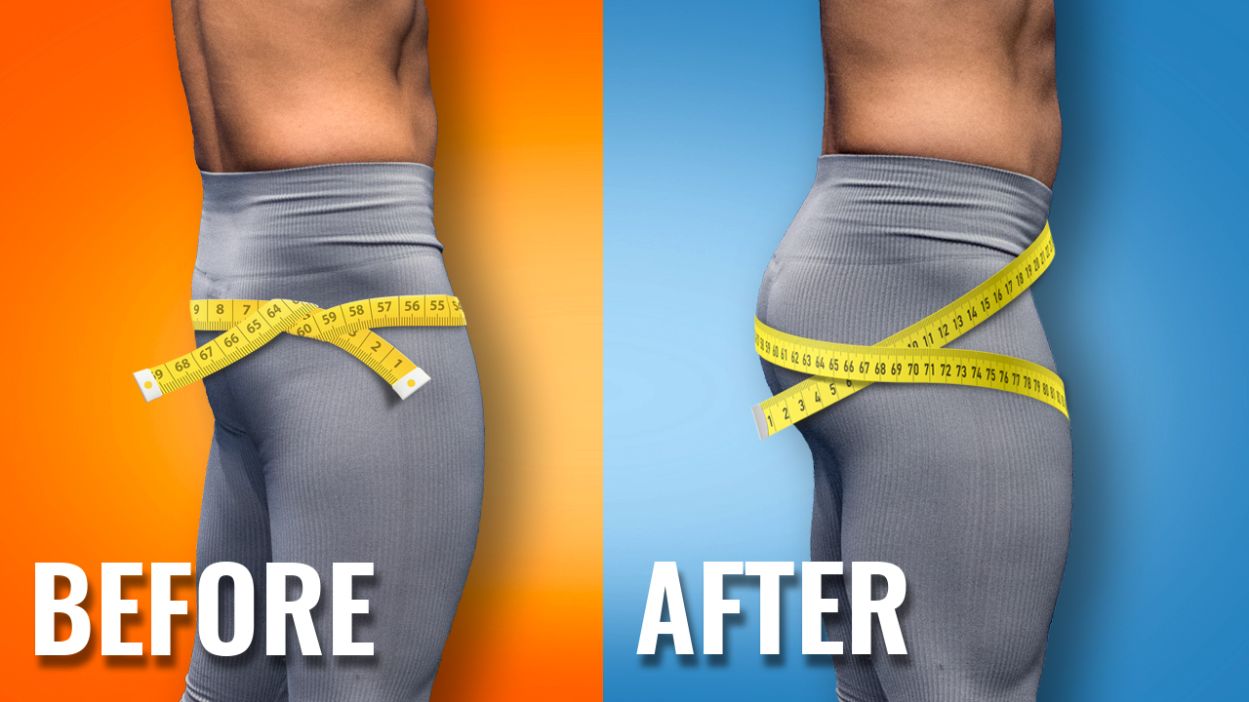 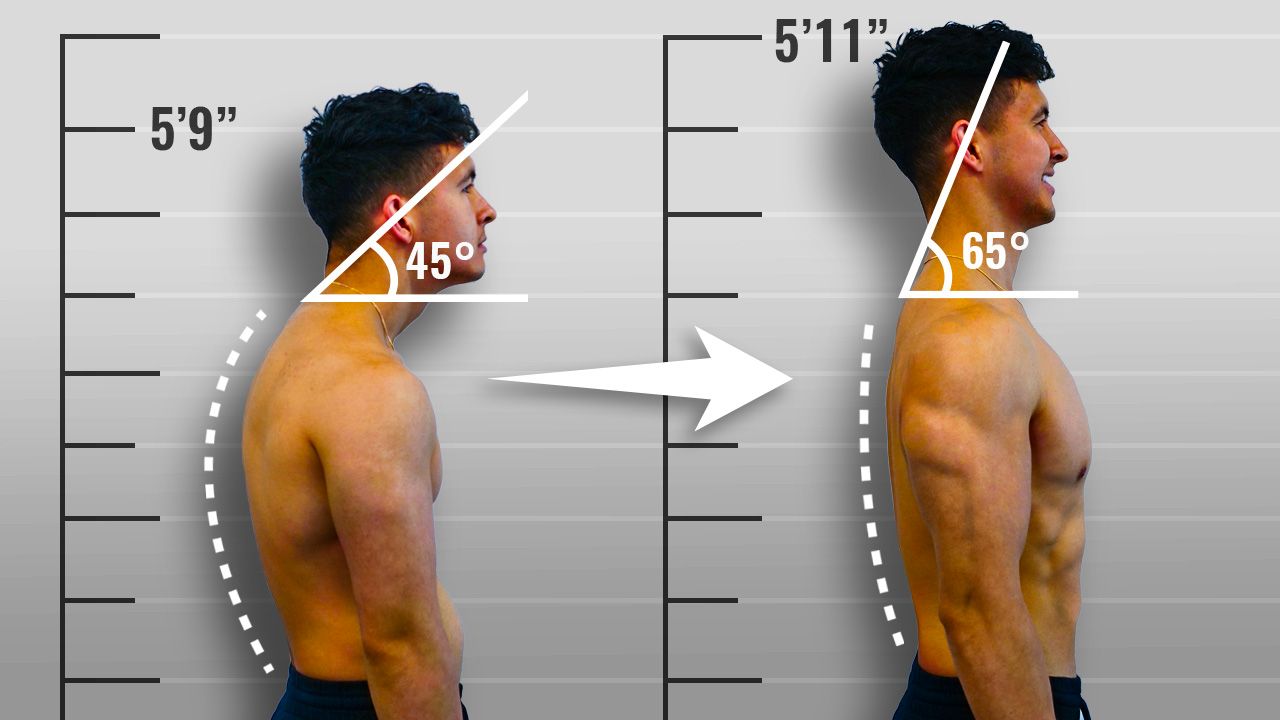