Goals of this article

The goal of this article will be to cover the basic anatomy of the bicep muscle. The biceps is the largest muscle group in the upper arm. It also has multiple attachment points and is fairly complicated since it acts at two joint (the shoulder and the elbow). Knowing the anatomy will help you better target this muscle to increase power output and produce large, powerful looking arms.

This article marks the first in a series that will focus on body weight and barbell only exercises that target the biceps. The biceps are key part of the physique and instantly noticeable. Therefore they are a priority for many starting their workout journey.

With that said, not everyone has access to extensive gym equipment. Therefore, my goal here is to give you the tools to train with minimal equipment for the best possible results. The figure above highlights the position of the biceps with each of the two heads shown and labelled. The long head of the biceps is located on the outside. And the short head on the inside of the upper arm.

The forward-facing part of the upper arm (also known as the anterior aspect) contains three muscles. These are the: coracobrachialis, the brachialis, and the biceps brachii. The Biceps is the largest of these 3. The brachialis, when well developed pushes up on the biceps from underneath and can help accentuate the biceps peak.

The coracobrachialis, also forms part of the upper arm but only crosses the shoulder joint. Its major role is in shoulder joint flexion, adduction of the arm, and inward rotation. We will focus to a greater extent on the other two muscles here. 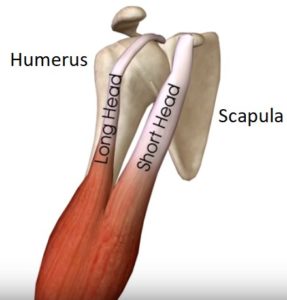 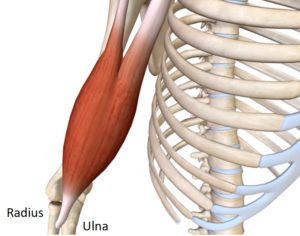 In the figure above, the insertion point of the biceps tendon is shown on the radius. The lateral (outside facing bone) in the forearm. The radius is on the same side as the thumb when the palms are facing forward. For a small but significant minority, there are two tendons next to each other that attach to the radius.

The muscle belly then attaches through the biceps tendon to the radius (a bone in the forearm). The attachment point is called the radial tuberosity (a rough attachment point on a bone). For the majority of the population there is one tendon.

Function of the muscles

Knowing these insertion points sets us up nicely for understanding the function of the biceps. Muscles cause movements by shortening and bringing closer together the two bones that they link on each end.

The biceps causes flexion at the elbow joint and supination of the radioulnar joint. The biceps also crosses the shoulder, so it plays a role at this joint. It assists with flexion of the shoulder joint (done primarily through the activity of the anterior deltoid and the upper pectoralis major muscle groups). Assist is code for dynamic stability. This means that the bicep stabilizes the joint when these movements are done. This is done more so early in the range of motion (about the first 30 degrees of shoulder joint flexion).

Studies have shown that the long head of the biceps is key for shoulder stability.

Appearance of the muscle

The outward appearance of the muscle is largely due to genetics. Those with shorter stature (and shorter arms) will be able to achieve greater muscle peak. While those with longer arms will have lesser peaks but fuller looking arms. The long head makes up the peak of the biceps and the short head makes the width.

Training the biceps in a targeted manner will allow you to achieve the desired, so without further ado, lets get into some key ideas you can apply to your bicep workouts.

The main function of the biceps is to cause flexion at the elbow joint. To do this, the biceps shortens concentrically while producing force. Of course, the alternative to this is an eccentric contraction, where the biceps produces force while lengthening.

Recently, some have provided evidence that this type of contraction can cause tissue damage and subsequent recovery leading to larger muscles.

Here we will provide general recommendations to increase biceps mass. These can be applied while varying the weight, number of reps, and total volume as desired to fit into your weekly exercise routine.

1 – Altering your grip to target each head of the muscle

The long head will be preferentially activated when using a narrow grip. The long head is on the outside of the arm and can be targeted to enhance the appearance of the bicep peak. 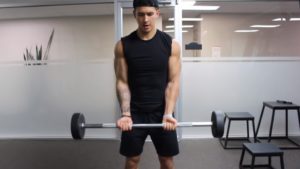 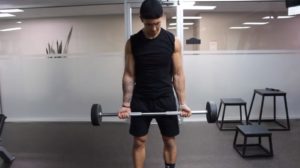 Short head is preferentially recruited when using a wider grip in performing bar curls. Focusing on the short head will help increase the width of the muscle. A well developed short head of the biceps gives the appearance of a fuller looking muscle in general.

2 – Elbow placement during the curls is key

Keeping your elbows slightly in front of your body during the curls will maximize activation of the biceps short head. The bar curl is shown from the side view going from the starting to the final position:

Keeping your elbows in line with your body will maximize activation of the long head. Once again, the exercise is shown from the starting to the final position below, note the alignment of the upper arm with the body:

Knowing how to tweak/replace exercises that suit your training goals is pretty complicated. Thankfully, though, the team here at BWS has the necessary expertise to do just that. Our 3-on-1 coaching program takes the guesswork out of training, nutrition, and even mobility work – so you can focus on what matters: making gains. If you’re interested:

Therefore, the activity can be adjusted to target each. By carrying out partial curls as shown below, either the short, or the long head can be selectively strengthened. You can use partial reps to finish your sets.

For example, you can complete a full set and complete it with 6-8 partial curls to target each head on different days or in separate sets.

4 – The amount of supination

Both supination and pronation are movements that happen at the radio-ulnar joint, a fibrous joint made up of the radius and the ulna in the forearm. The range of motion in this joint is limited and the movement happens as the lower part of the radius flips over the ulna and back.

First let’s cover what supination is. As shown in the pictures below, supination is the palm forward facing position. Movement that makes the palm face backwards is termed pronation.

As shown by this study the amount of supination can variably activate heads of the biceps.

From a neutral or pronated position – the short head of the biceps is the more efficient supinator.

When the forarm is already supinated – the long head of the biceps is the more efficient supinator.

5 – Behind every great bicep there is a great brachialis

This muscle is located under the main muscle belly of the biceps and may be thought to be part of and the same thing. While the brachialist is anatomically distinct from the bicep, the location makes it a prime candidate for targeted exercises. 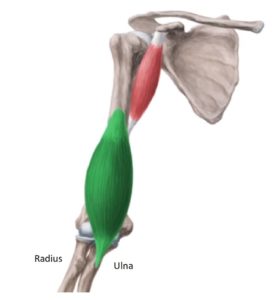 Strengthening the brachialis through hypertrophy can help create the appearance of fuller, more powerful looking biceps as well.

As shown by this paper flexing the arm with a neutral or pronated position in the forearms will minimize biceps involvement and stress the brachialis.

Performing reverse or hammer curls can be used to target the brachialis. Sets of these curls can be performed in addition to your normal routine throughout the week to target this muscle group.

This article has provided some detail on the anatomy of the biceps muscle group as well as brief summary on the brachialis and coracobrachialis which make up the upper arm. The next articles in this series will provide more specific details and exercises to help you train and enhance the appearance of your bicep muscle with minimal equipment.

As always, thank-you for the continuous support! I always enjoy reading the questions you have posted in the comments section and implementing your suggestions!! If you have enjoyed this content, Please follow me on Instagram and subscribe to my Youtube channel where I will continue to frequently post videos on a wide range of work-out related topics. 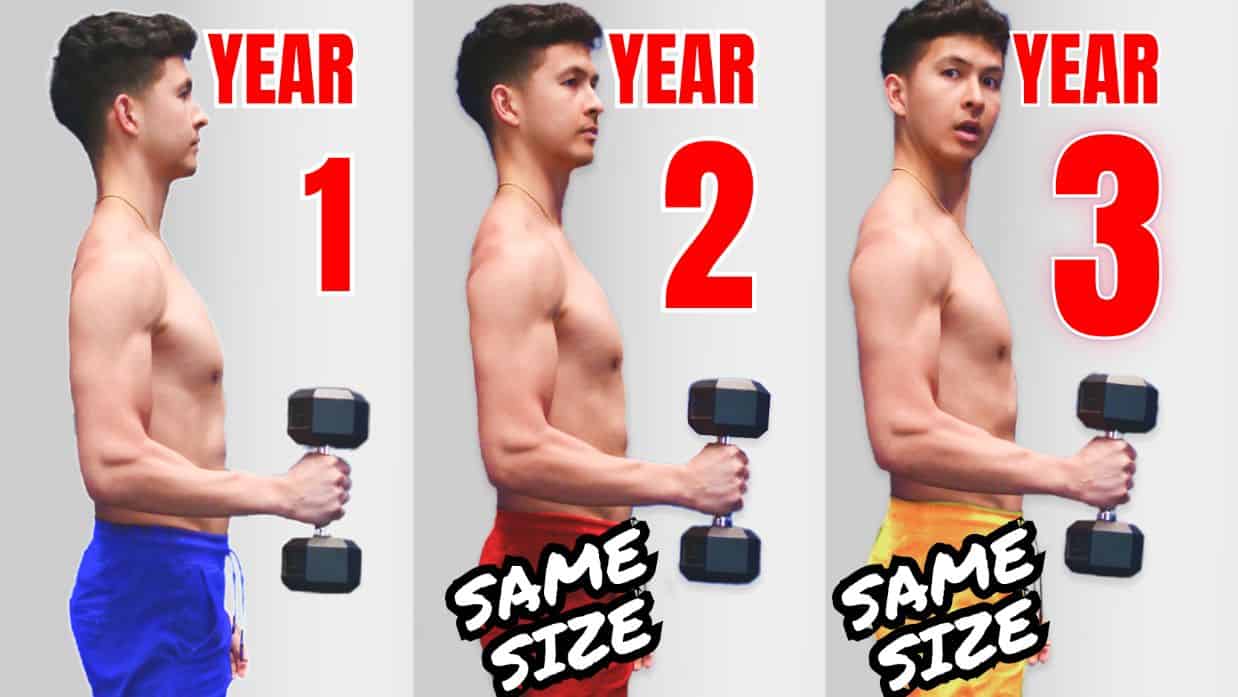