If you want to learn what the main sex differences in training and dieting are and what they mean for you... Then you need to read this article.

It’s no secret that men and women are physiologically quite different.

We start out with different levels of muscle mass, store fat differently and have drastically different hormonal profiles.

So it only makes sense that our approach when it comes to fat loss should drastically differ as well, right? 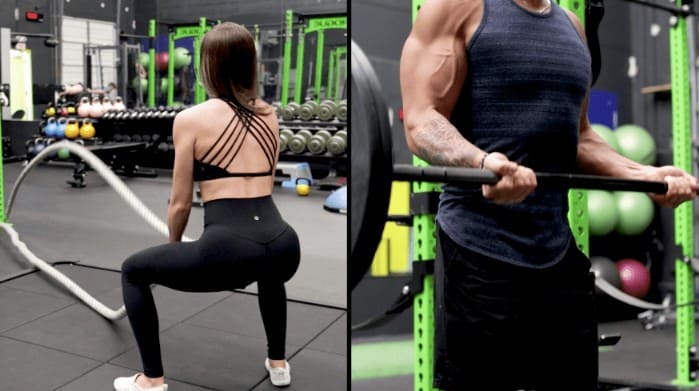 Despite our physiological differences and despite what mainstream media may promote, the optimal approach to losing fat will actually be quite similar regardless of gender.

But with that being said, for the best results, there are also key differences that should be implemented in each respective routine.

And in this article, I’ll discuss exactly what those gender differences are and how to implement them in your training and nutrition for fat loss.

If you're looking for a training program that'll always help you train in the most optimal approach for muscle growth (no matter your gender), I've got just the thing for you. Every BWS program is designed to help you transform your physique in the most time-efficient manner. And best of all? It's all rooted in science. For more information on how BWS programs can help you to look better - FAST:

For the most part, the basic concepts of training for fat loss will be the same for both men and women.

Both need to put less emphasis on cardio and instead prioritize weightlifting on a regular basis and progressively getting stronger in the gym.

This will not only aid in the fat loss process, but will also prevent you from simply ending up skinny fat rather than well-defined or “toned” with adequate muscle mass after all your weight loss and hard work. 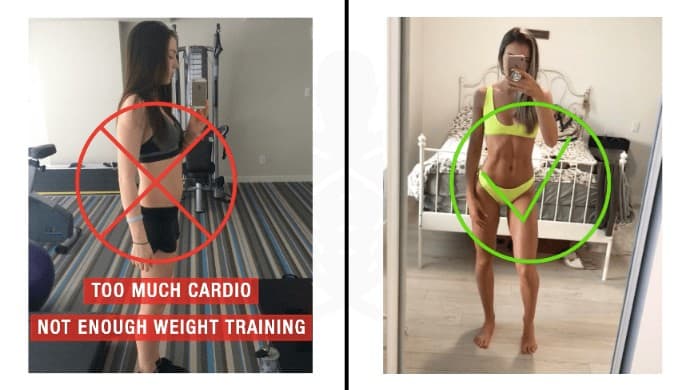 So focus on the weights, and simply use cardio to speed up the process as needed.

Now as for the differences between how men and women should train, before diving into physiological differences, we need to first take into account gender specific goals and how they differ. 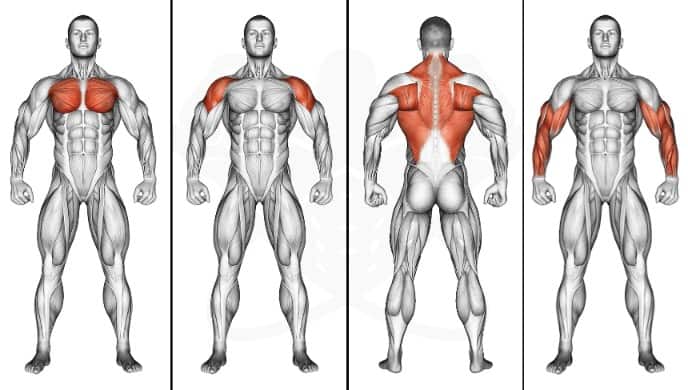 Let's face it, most men typically want a big chest, broad shoulders, a wide back, and big arms. And therefore their training should reflect this by emphasizing movements that target these areas. This means lots of volume for compound pressing/pulling movements as well as arms exercises.

The vast majority of women on the other hand just don’t really place “growing their chest muscles” for example as a priority. And instead, often want more muscle definition while often placing a priority on growing their glutes.

Therefore, in this case, women with these goals in mind should prioritize and add more volume to movements that target these areas and compensate by slightly reducing their upper body volume for example.

But training goals aside, there are various physiological differences that should be considered as well.

Let’s start with differences in training volume and frequency.

Multiple papers (one, two, three) have indicated that women actually seem to recover faster after their workouts than men do.

For instance, a 2010 paper from the International Journal of Sports Physiology and Performance found that:

After one set of bench press to failure, trained men needed 48 hours to recover and re-establish their baseline strength. Whereas trained women only needed 4 hours to do so. 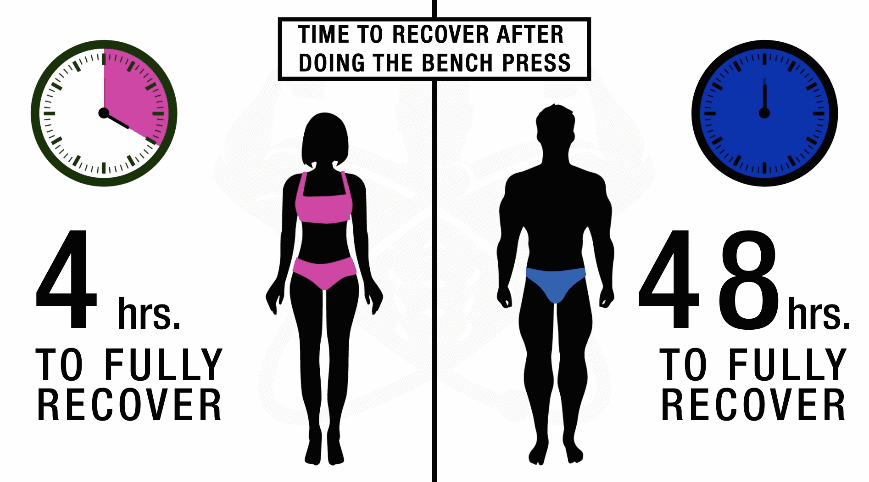 ...which is thought to be due to female’s having a better nutrient delivery to their muscles.

So as a result, they don’t experience as much muscle damage from a workout as men and can thus recover faster between sessions.

This in turn implies that females may be capable of doing slightly higher volume workouts compared to men.

This can be especially useful if there’s certain muscle groups they’d like to bring up or prioritize by dedicating more weekly sets than usual to them.

In addition, they may also better suited to workout each muscle more frequently throughout the week without experiencing symptoms of overtraining. This makes full body workout splits or upper/lower splits more favourable for women.

For similar reasons as previously discussed, women also seem to recover faster after a set than men do.

For instance, a paper by Fulco and colleagues found that when the adductors were worked to physical exhaustion during a set... 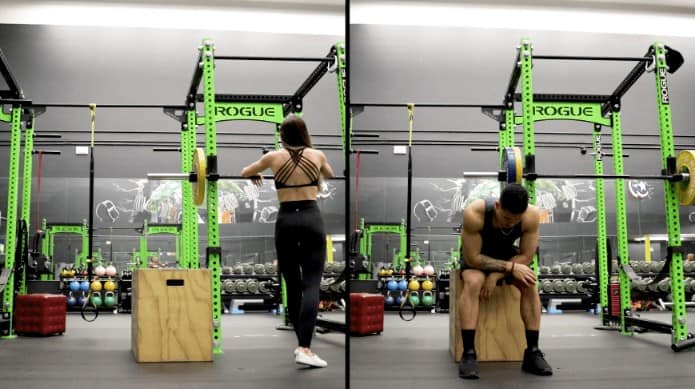 ...the female subjects were able to recover significantly faster for the next set than men could. This was especially true during the first minute of rest.

And other papers do agree with this finding as well, implying that women may be able to get away with shorter rest periods between sets than men.

...since we know that the optimal rest time for men seems to be around 2-3 minutes between sets (or even slightly more depending on the exercise and intensity)...

...women may want to experiment with slightly shorter rest periods than this to best take advantage of their faster recovery and greater ability to handle metabolic stress.

But obviously experiment with it and ensure this isn’t impairing your overall strength as a result.

Now, your optimal rest period is not only going to vary between someone of a different gender - but also with someone of the same gender. If you wish to get more guidance on this, don't worry. Our 3-on-1 coaching program can help. I and my team are going to personally determine the rest period most suitable for you and your selection of exercises - helping you achieve your dream physique. Sounds good? Let's get started then:

Now moving onto nutrition and optimizing it for fat loss, again there’s actually not too much difference between genders.

The key in both cases will obviously be ensuring that you’re:

These two things alone will be by far be the most important factors determining the success of your fat loss efforts. 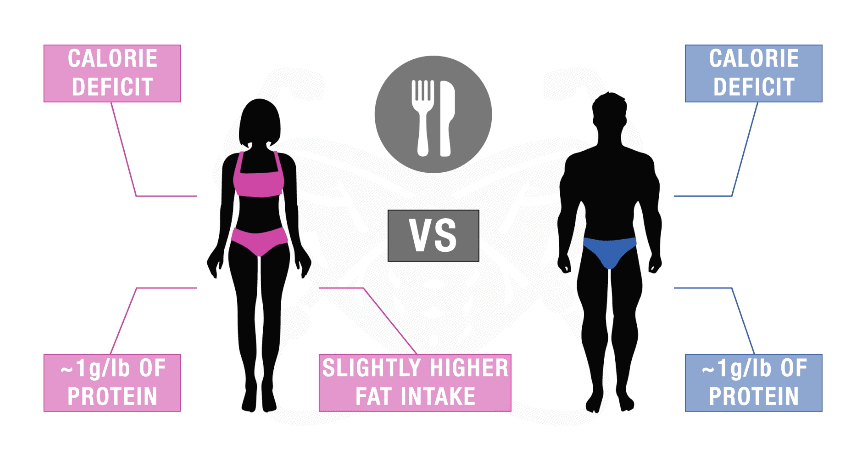 However, what's interesting, is that women may actually do better dieting with slightly higher fat intakes than men.

As for the reasoning behind this, research on female exercise metabolism has shown that:

Women burn more fat and less carbohydrates and protein compared to men at any given exercise intensity.

Meaning that they don’t need to depend on carbs as much as men do to replenish their muscle glycogen for fuel during workouts.

And as a result, the lesser need for carbohydrates frees up more calories to be consumed as fat. And this can be particularly beneficial for women when dieting since it seems to better help females with satiety.

For instance, a 2016 paper from the Journal of Nutrition compared the effects of a high fat meal versus a low fat meal on appetite in men versus women.

They found that the high fat meal was 15% more satiating for women but not for men: 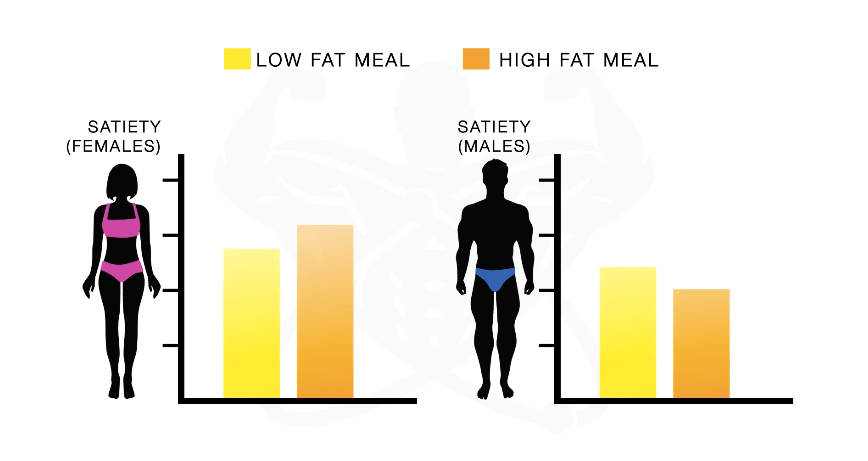 Meaning that for women eating at a deficit, a relatively higher fat diet (e.g. 30-40% or more of your daily calories coming from fat)....

...may help better manage hunger without negatively affecting gym performance given their greater ability to use fat for energy.

But, in my opinion, the benefits of higher fats versus higher carbs when dieting is very individual, so I encourage you to experiment with it to find what works best for you.

The Takeaway On Gender Differences For Fat Loss

So I hope you were able to see that although the main principles of training and dieting are actually quite similar for both men and women, there are minor differences that should definitely be considered and implemented appropriately.

All-in-all though, what’s going to enable you to lose fat most effectively while retaining your muscle in the process is a combination of regular heavy weightlifting and a calorie deficit, and this is true regardless of gender.

But to sum the article up for you, here are the main gender differences and how they can be applied in your training and diet: 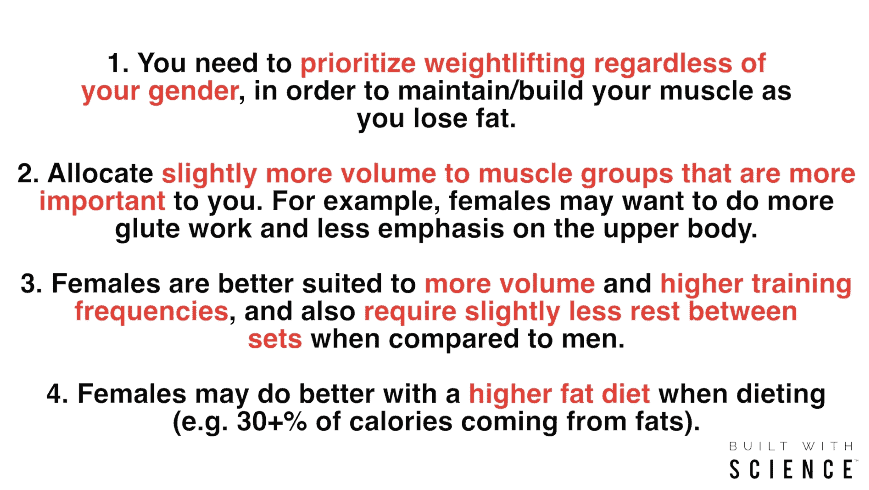 Although these little differences may not seem like much, they really are what’s going to enable you to transform your body as efficiently as possible.

This is exactly why I’ve created both female AND male science-based programs, such that your program is optimized for you in ALL aspects.

Each are designed to be an all-in-one process to transform your body from your starting point to a leaner, stronger, and bigger physique in the fastest, most efficient way possible.

To join today, simply take my starting point quiz below to determine which #BuiltWithScience program is best for you: